WEATHER: A superb morning with sunshine, no wind and a nice 25C temperature, thunderstorms later.

A very early start saw us loaded onto the bus at 5am in readiness for a 30 minute drive to the village of Kerkini and on to the dock to board our boat. We then enjoyed a wonderful and special birding experience that will not be forgotten for a very long time. 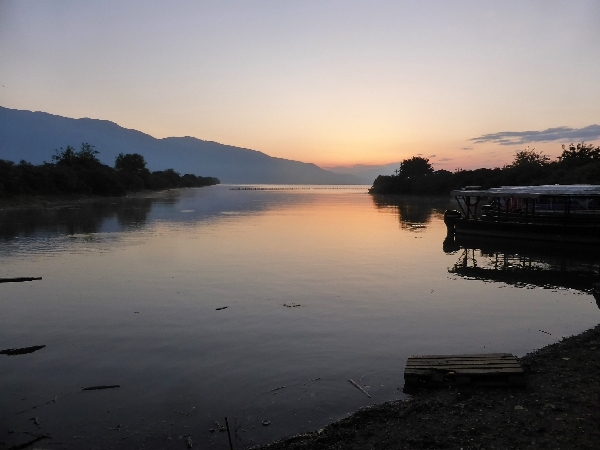 Sunrise from the dock 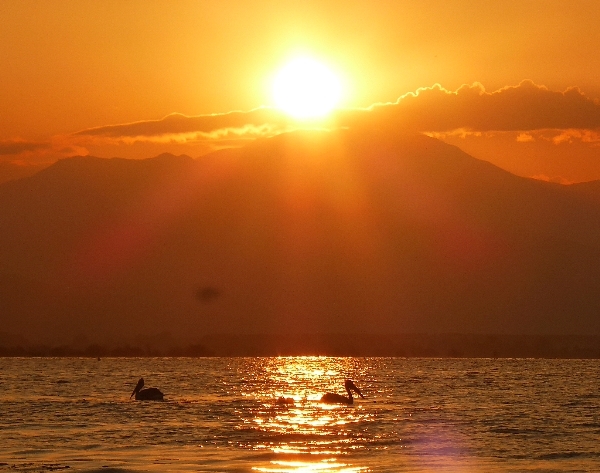 sunrise with the Pelicans

It was one of the best Birding Boat Tours I have ever been on, it was absolutely fantastic! We had perfect weather superb light conditions and an abundance of species, all seen in close proximity, it would be hard to beat anywhere else in Europe. The superlatives gushing from my group during the trip were endless. 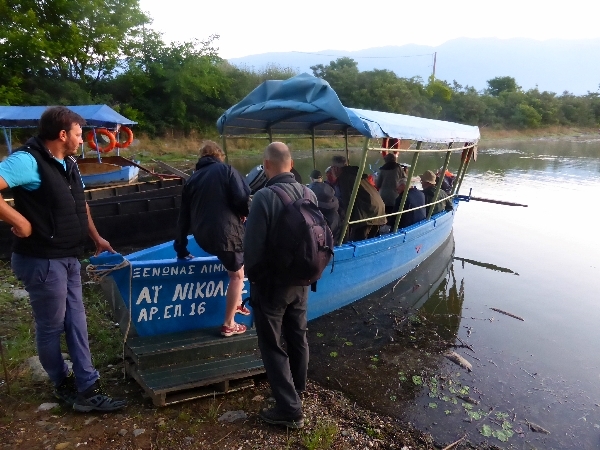 After crossing the lake, where we noted Black-necked Grebes and Black-headed Gulls for the first time, we drifted into a colony of birds that stretched as far as the eye could see, every tree, bush and clump of weed had many nests on them. The most abundant breeding species by far, was the Great Cormorant, but many other species joined them. Eurasian Spoonbills, Dalmatian Pelicans, Grey Herons, Little Egrets, Pygmy Cormorants, Squacco Herons, Night Herons, we even found one of the very few Cattle Egret nests and a single Glossy Ibis, both of these species are pioneers, attempting to establish themselves and breed successfully for the first time. 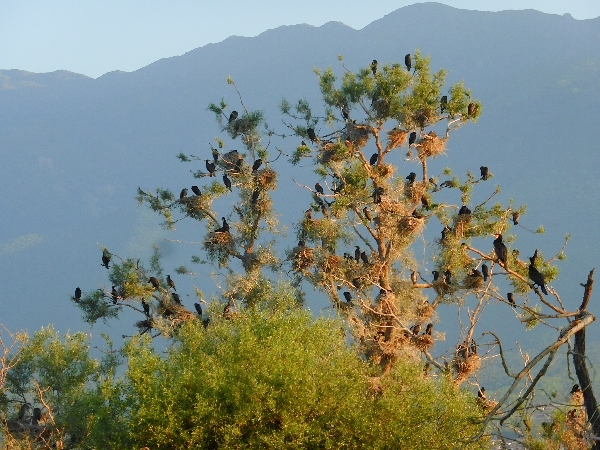 just one of several hundred bushes full of nests

Along one channel there were hundreds of Sand Martins, they were nesting in holes in the low bank, there must have been over 1000 of them, the biggest colony I have even seen. 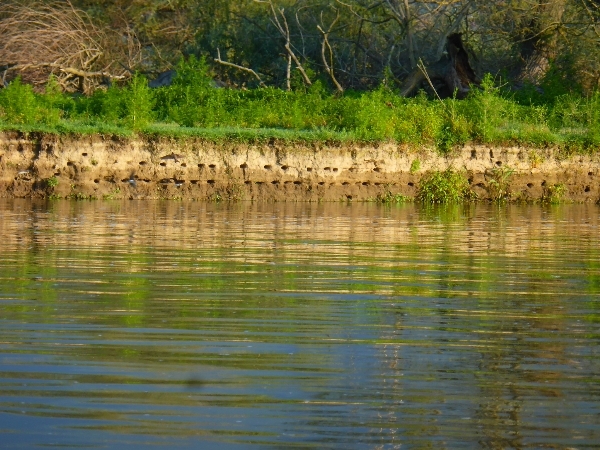 As we drifted further into the shallow area of the lake we added Penduline Tit to the list, a nest was seen hanging from a willow tree and the birds were close by. 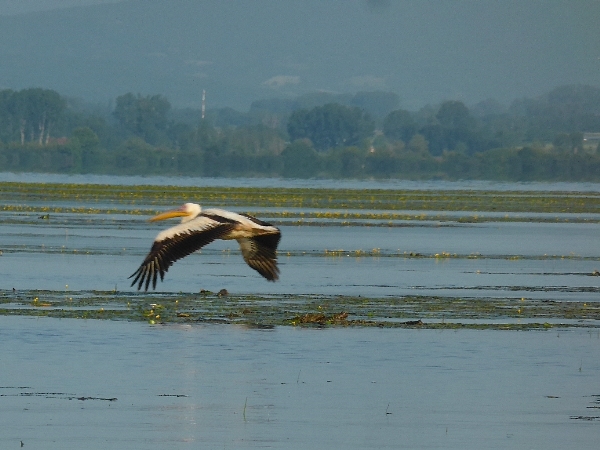 We got close to both Great White and Dalmatian Pelicans, a huge nesting colony was seen on a man-made stony bank, a breeding platform with many nests had recently collapsed we were told. On the collapsed heap of wood a colony of Common Terns had be established, we saw one or two Whiskered Terns too. 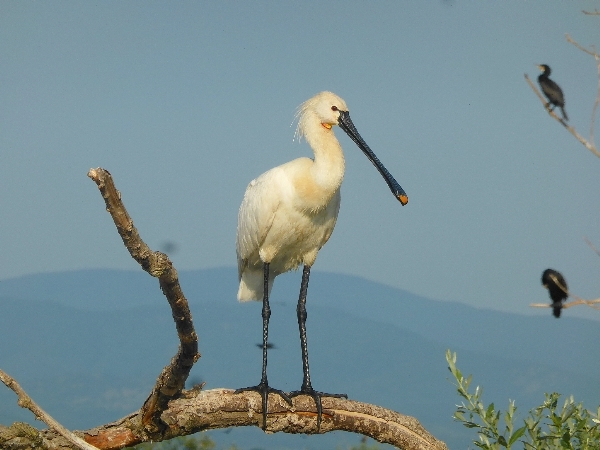 We were out there for 3 hours but the time elapsed so quickly it was a surprise when we started to turn back to the dock, it was a great trip, I can’t tell you how much I enjoyed it, there is something special about this whole area. By 10am we were back at the hotel tucking into a very, late breakfast much appreciated by all of us. We then planned to have a long break before going out again at 3pm. Some of the group relaxed on their balconies, some had a nap and others went walking around local tracks and the hotel grounds. 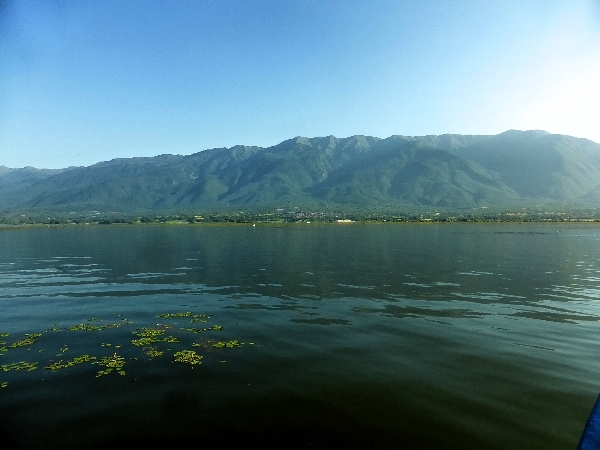 views from the lake 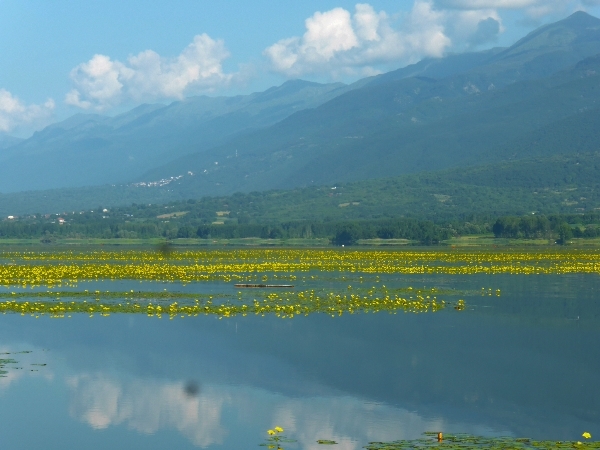 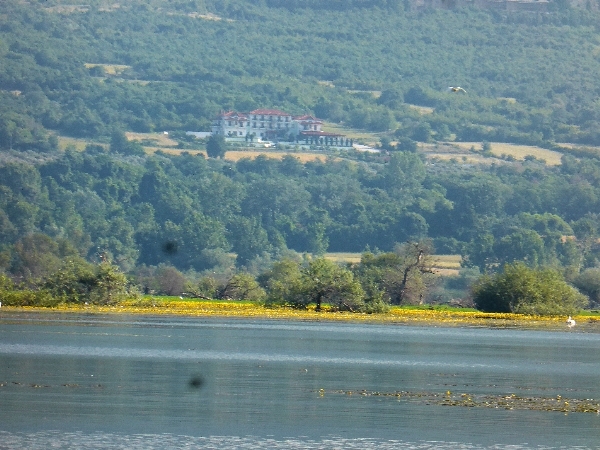 our hotel seen from the middle of the lake

It was about an hour later when I got a phone call from Sue, one of the group, she told she was watching a flock of Rosy Starlings down at the village. I immediately dashed down to the bus and roused as many of the group I could before shooting down there. Sure enough a flock of some 200+ Rosy Starlings werefeeding in the Mulberry Trees, what a fantastic sight, we stayed for an hour before driving back. 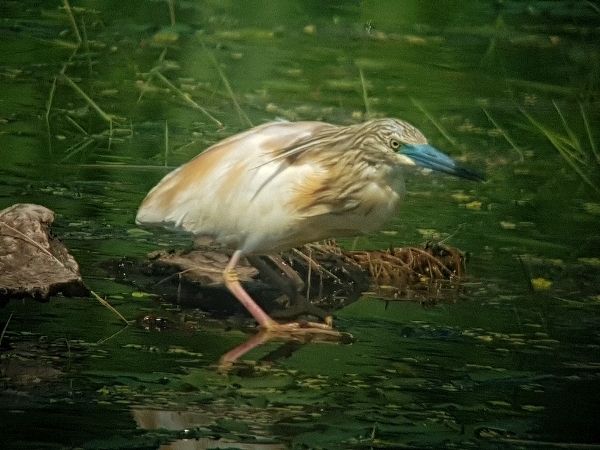 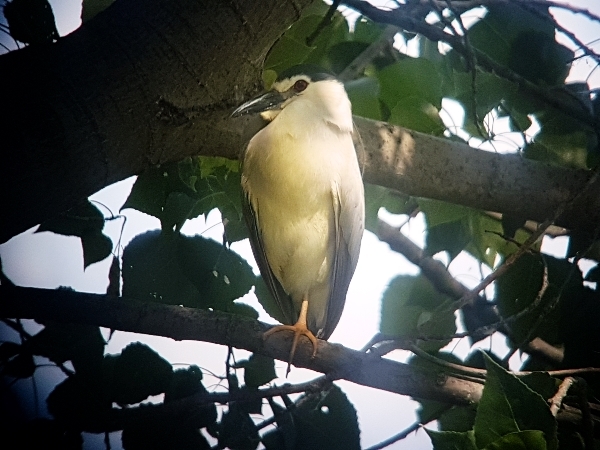 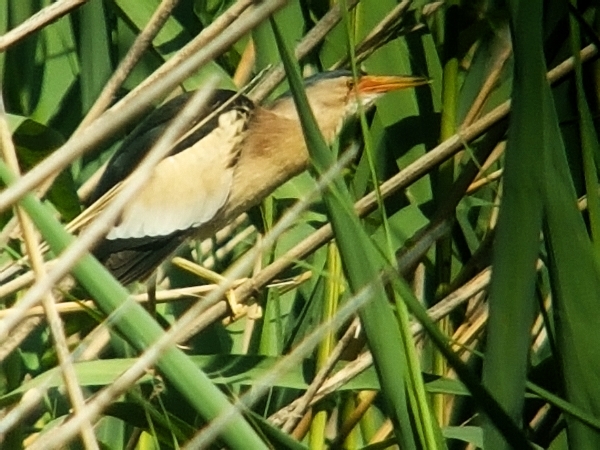 At 3pm we all gathered for our afternoon and evening birding session, we intended to drive round to the dam side of the lake, have dinner and then drive to local site to look for Eagle & Scop’s Owls and European Nightjars. But of course, we had to stop at thr Rosy Starlings to show the rest of the group, it was marvellous there seemed to be even more birds. We also watched Great Reed Warbler, we saw our first Little Bittern, we also had great views of Squacco Heron, Night Heron and a distant Purple Heron. 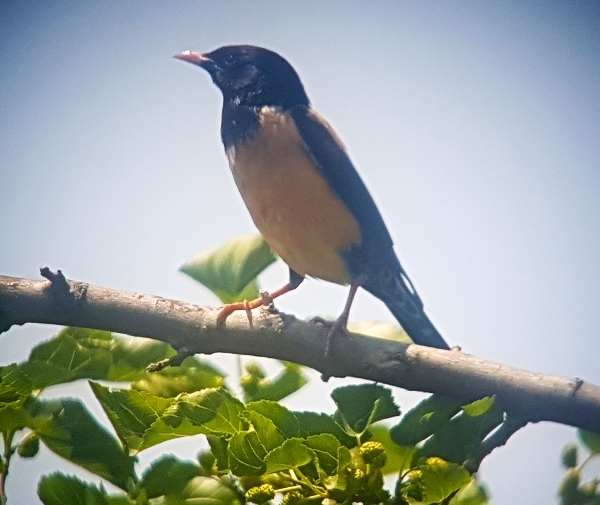 one of the hundreds of Rosy Starlings seen today

Our drive around the western shore of the lake towards to dam was punctuated with many stops, we watched Pygmy Cormorants in close proximity to the shore, some of the group saw a ‘Crake’ species in flight and we bumped into several other flocks of Rosy Starlings, they really had arrived in large numbers. 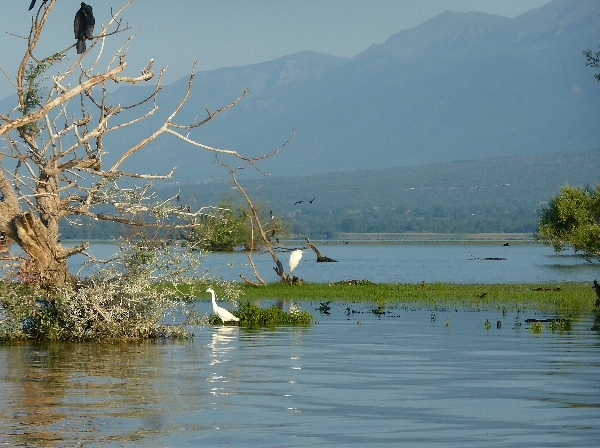 All the time we worked our way towards the dam the dark clouds gathered above us and by 6pm thundered rattled the sky and distant lighteneing flashed above the mountains. It was just after 7pm when we arrived at our restaurant, it was already getting dark, the wind increased, and the thunder roared louder. We stopped to watch Yellow Wagtails dropping into a field of maize (the Black-headed subspecies Feldegg) we also had great views of Turtle Doves there. 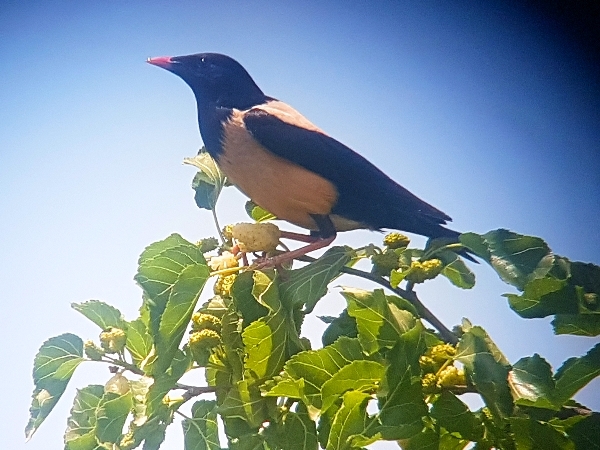 Fortunately, the rain held off, but we could see great rain storms across the lake, we did still go to the Owl site but we knew it was not going to be good in the windy, damp conditions, such a shame. We did hear a European Nightjar, but nothing else.

We were back at the hotel by 11pm. An early start and late finish, true hard core birding today!