Our morning trip to Holy Island was much anticipated by the group, however, as far as birding was concerned it turned out to be a disappointment because of the wind. Blustery gales almost blew us over at times and you couldn’t keep your scope still when viewing.

We arrived at 9:30am and parked up, Holy Island is reached by a metalled road that becomes submerged during high tide so you have a limited time on the island. We walked down through the village, passed the ruins of the ancient Priory and up on the bank to view the channel between the island and the mainland. We found a dozen or so Goosanders loafing on the rocks, also Oystercatchers, some of the common gulls and a huge group of Grey Seals lying on a sand-bar. 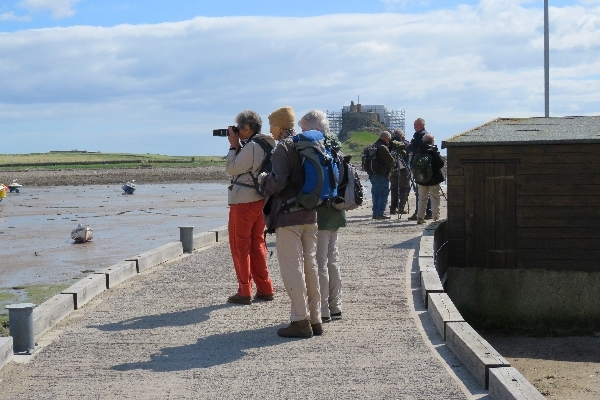 In the harbour we had some shelter from the wind, we saw Greater Ringed Plover, Rock Pipit, a few Sandwich Terns and not much else. We walked around to Lindisfarne Castle which was closed for repair and covered in scaffold and white sheeting, such a shame. 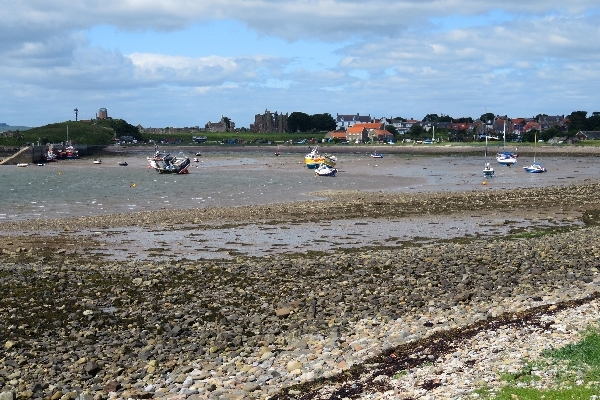 The pathway led us around the coastal edge of the island and whilst we tried hard to sea-watch it was very hard to find shelter from the wind. We watched many Arctic Terns, Northern Gannets, Eider Ducks, Ruddy Turnstones and more Oystercatchers. In the grass meadows there were several Meadow Pipits and Skylarks, they were dashing about but we saw little else out there. 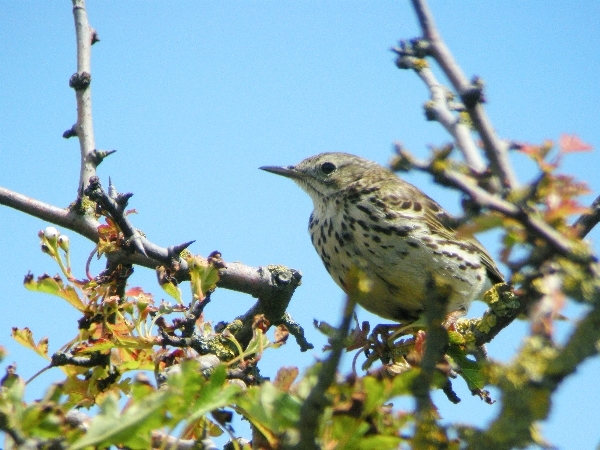 A small lagoon near the visitor’s centre held about 20 Northern Lapwing and a single Dunlin and several Redshank. We ate our picnic lunch in the village whilst sitting on park benches before getting back onto the bus to drive off the island.

We left Holy Island at 1pm and spent the next hour driving down to Amble Harbour where we were to board a boat for our ‘Puffin Tour’ around Coquet Island. It was still windy but the sailing went ahead and to our great surprise and delight the off-shore westerly wind did not affect the sea condition at all. 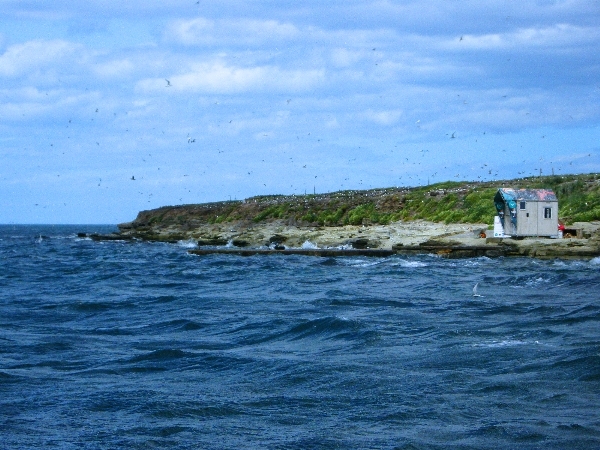 We had a great trip, the ride was smooth and wind was hardly noticeable. The birding was amazing, thousands and thousands of birds filled the sky and the water all times. We had good close views of Grey Seals too. The boat drifted close the shore-line of the island but for obvious reasons we were not allowed to land there. 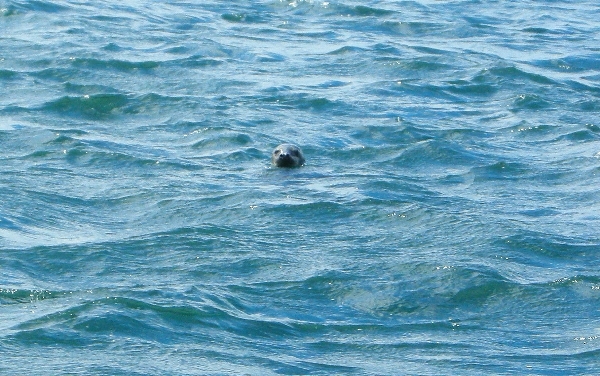 The island is famous for its Puffin colony but there are also Arctic Terns, Sandwich Terns and around 90 pairs of the rare Roseate Terns. We got close enough to pick out the rosy breasts of the Roseate Terns as they perched on the shore, fantastic! Other breeding species included: Puffin, Kittiwake, Fulmar, lots of gulls and a few Guillemots. The trip lasted just one hour and was over before we knew it, what a great experience. We saw a huge Sand Martin colony as we came back to the harbour as well as Cormorants and Shags. 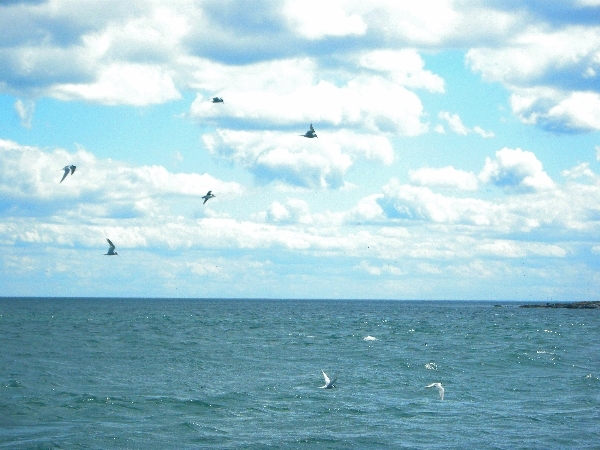 Arctic Terns around the boat

Back on terra firma we got back on the bus and drove for 10 minutes round to the Hauxley Wildlife Trust Reserve. This splendid reserve has just re-opened after a long closure due to a fire that destroyed the main centre. You can view a fresh water lagoon from several hides as well was the visitor’s centre, it was packed with birds, unfortunately we had only 1 hour to enjoy it as the reserve closed at 5pm! 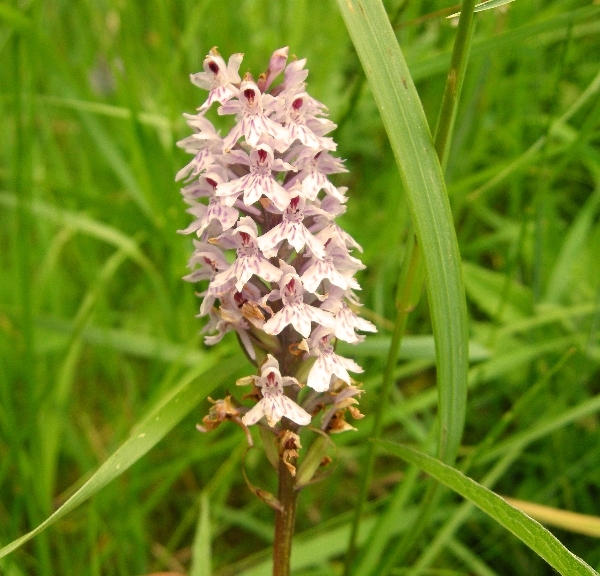 We saw many species there and an added bonus was that the high tide had brought in lots of waders, we had great views of both Black and Bar-tailed Godwits, Redshank, Curlew, Ruddy Turnstone and a single Common Sandpiper. Dozens of Canada and Greylag Geese were joined by Common Shelduck, Tufted Duck, Gadwall, Mallard and a few Little Grebes out on the water. 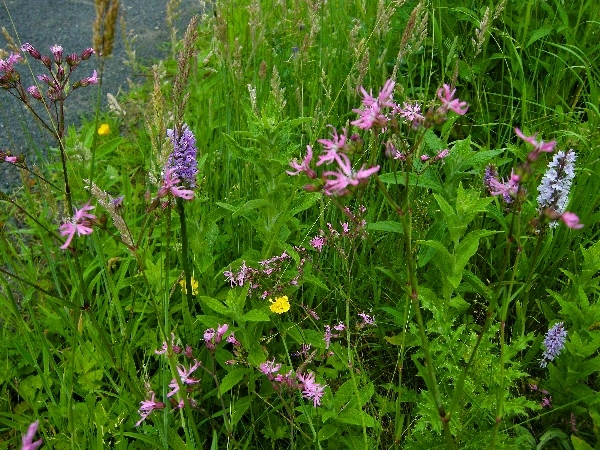 Before we left we found a nice bird for the list in the shape of a Little Gull, it even looked tiny amongst the Black-headed Gull chicks that lined the shore of an island. We had a superb and enjoyable hour in the reserve, the staff were really friendly and helpful, it was a smashing place to visit and to top it all we found many orchids in the grass verges and a Red Squirrel feeding on nuts at the ‘bird feeding station’ in the car park! 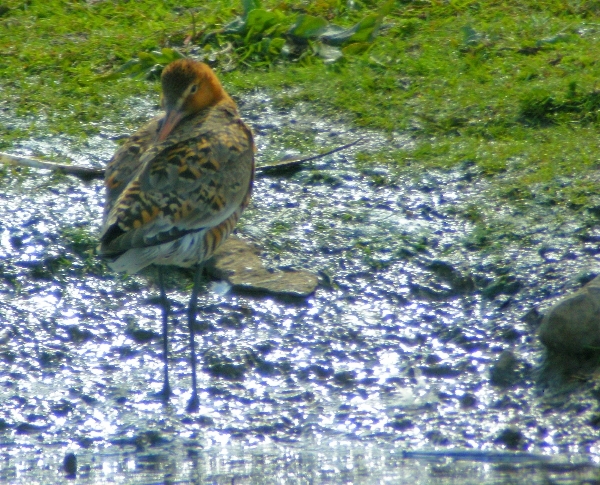 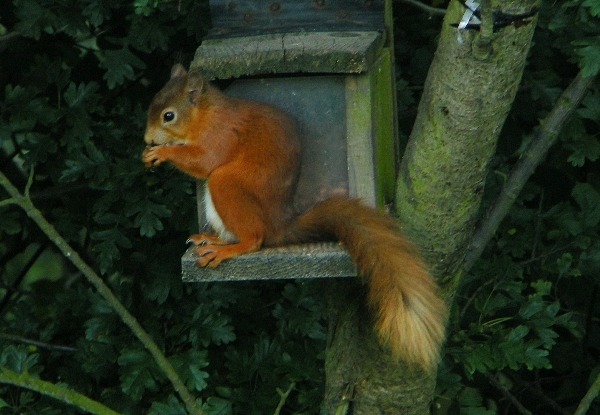 We were back at the hotel 6pm, dinner was lovely, again there was too much food, but we enjoyed it.