It was a a bright and beautiful morning, a cloudless sky greeted me as I stepped out at 7am. For about 30 minutes I had been watching my bird feeders which are starting to get busy. Half a dozen species were in my garden and four of them were taking it in turns to ‘steal’ my sunflower hearts, Great Tit, Blue Tit, Robin and Goldfinch were the culprits. I also saw Blackbird and Magpie in the garden.

I took the track into the valley and at the entrance gate I stopped to watch Great Spotted Woodpeckers, at least 3 Robins, a few Wood Pigeons and a Collared Dove was cooing loudly. I decided to walk up the steep path to the top of Rook’s Hill because I wanted to get to the bramble slopes as quickly as possible to see if the flurry of warblers I had seen yesterday were still present. 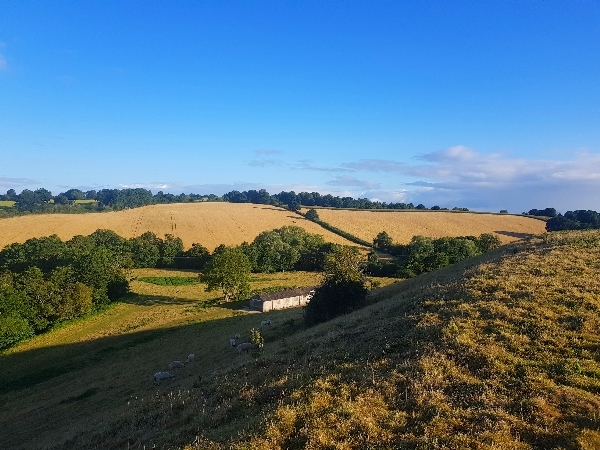 the view from the top of Rook's Hill

Along the top of the ridge I heard Common Buzzard, Common Pheasant, Green Woodpecker and a Chiffchaff calling. A Robin delivered a couple of phrases from its winter song as I descended into the small valley behind Rook’s Hill. Alas the area was virtually deserted, not a single warbler was present. I did find a nice surprise when I looked along the River Yeo, a Mallard with four chicks swam away from me in the middle of the river. I had expected mallards top breed on the river but this was my first evidence of them doing so, 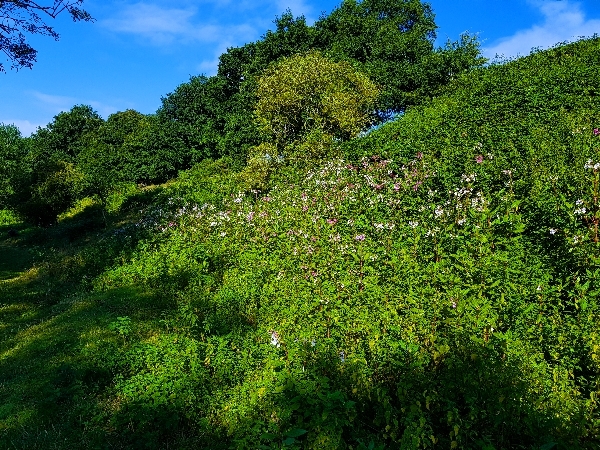 Things picked up a little as I stood on the slope above the bramble clumps, I scoped the dead tree and the wire fence on the opposite bank of the river, The tree held Great Spotted and Green Woodpeckers at different times and a small flock of Goldfinches. The fence produced a couple of juvenile Common Whitethroats and nothing else. 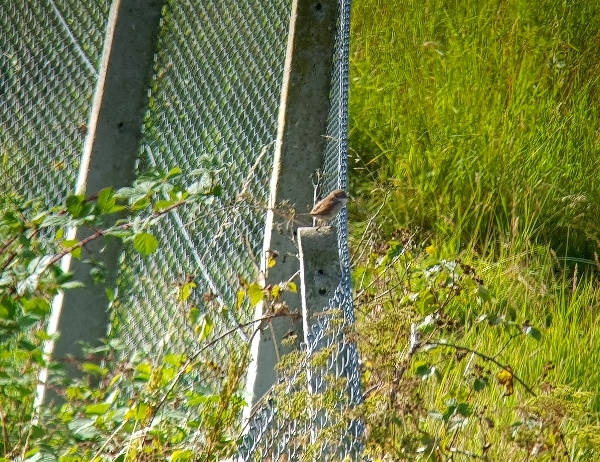 Before I left, a Sparrowhawk flew over me from behind and dived down to the river perching in a small tree behind the large dead tree, I scoped it and saw that it was a colourful male, but my pictures are somewhat lacking in detail!! The bird did perch with its back to me, it then flew over into the meadow and tried unsuccessfully to perch on the top of the buddleia. 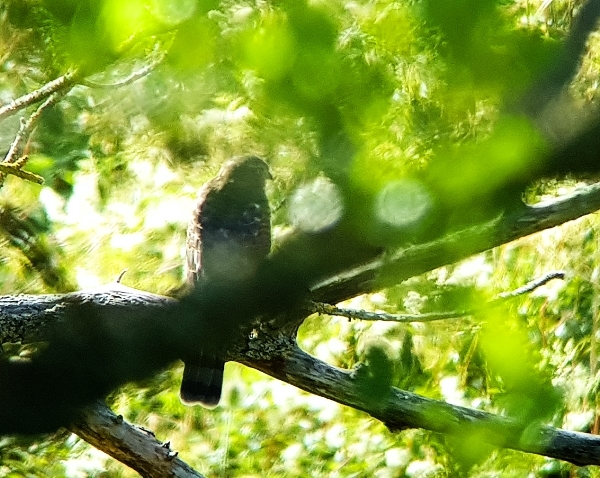 Whilst watching the Sparrowhawk I picked out two Song Thrushes sitting low down in the buddleia shrubs and I had much better views of the Whitethroats on the fence. I left the eastern slope of Rook’s Hill and walked along the hawthorn hedge down the slope to the stream, I was hoping for a Kingfisher or a Treecreeper sighting but neither turned up. 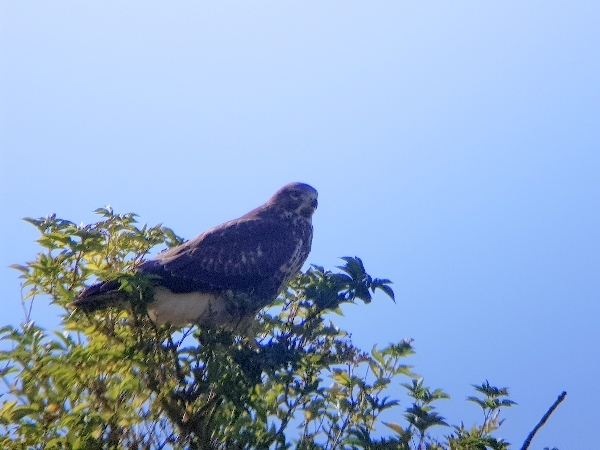 Another Buzzard sat on a small bush half way up the western slope of the hill, I used an oak tree as cover and got a little closer but the light was bad as I looked eastward, hence the poor picture. 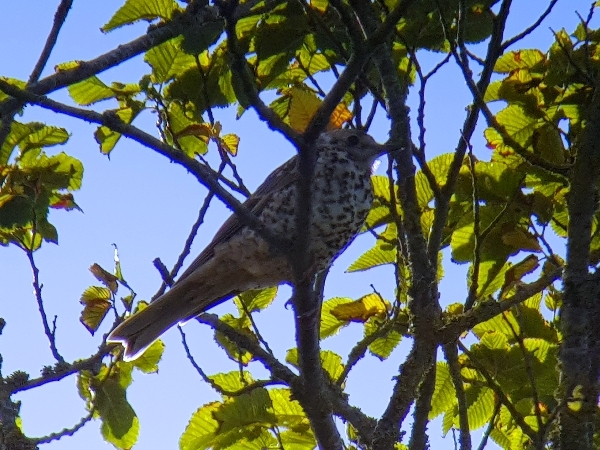 The Buzzard eventually flew off and landed ahead of me on a tree with dead twigs at the top, as it landed a group of five Mistle Thrushes flew out. The thrushes circled for a while and landed again in the same tree as the Buzzard.

Just before I left, I found a small Dragonfly and identified it as a Common Darter and then I saw a Common Blue Butterfly which is the first one of this species on my patch. 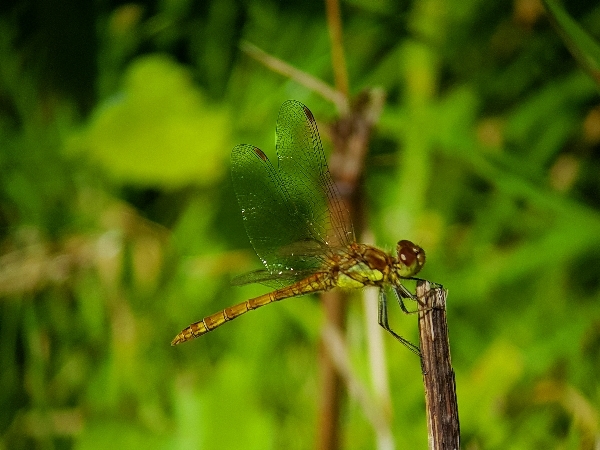 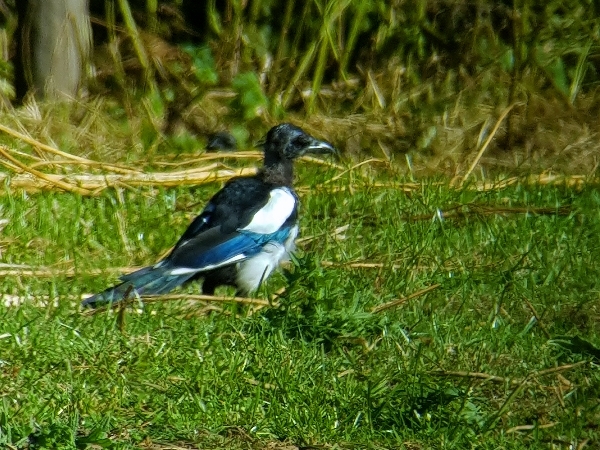 a Magpie in summer moult, not looking its best

Later in the afternoon Dawn and I drove to Alners Gorse Butterfly reserve, it was my second attempt to see Brown Hairstreak, we arrived around 2pm and as we got to the entrance we bumped into Guy Campbell, my birding pal from Yeovil, what a coincidence! 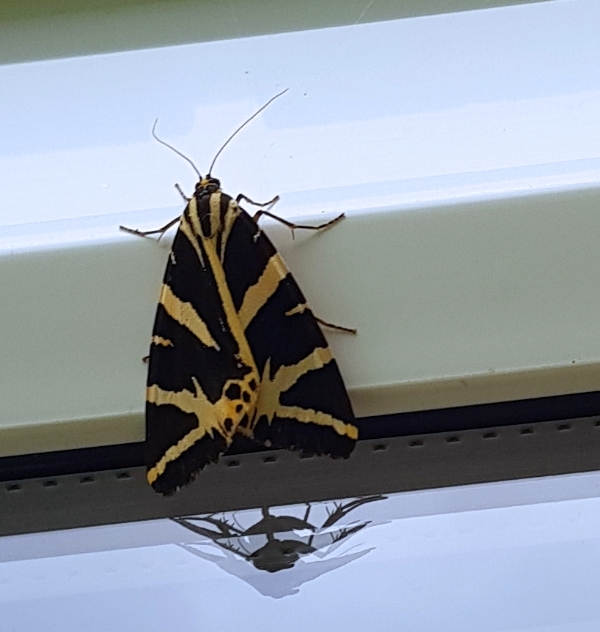 We trolled the reserve for a couple of hours and never had the briefest of views of the Hairstreak but we did hundreds of Gatekeepers, lot of Meadow Browns, a couple of Red Admirals, Common Blues and a surprising Chalkhill Blue. 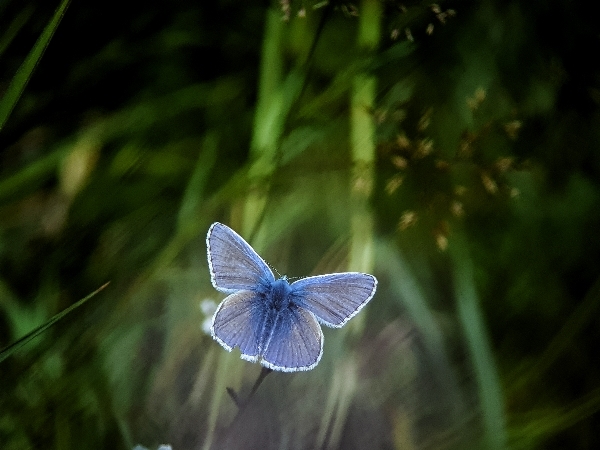 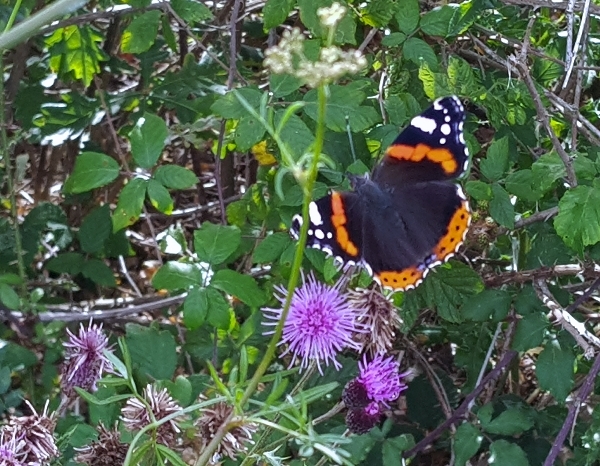 We also saw a Marsh Tit and Guy pointed out a Hobby flying over the reserve, we left just before 4:30pm empty handed but pleased with our visit because the flowers and the other butterflies we saw. We drove home through a torrential rain shower, Dawn reminded me that she had left aline full of washing out, ooops!!!!