Remember Weasel on Woodpecker ? Now check this out it is just as good - (This article was re-blogged - taken from Focusing on Wildlife)

Talk about a bird’s eye view—a red-winged blackbird was recently photographed “riding” atop a red-tailed hawk.

A visitor to the DeSoto and Boyer Chute National Wildlife Refuges in Iowa and Nebraska recently snapped an incredible photograph, which was released today by the U.S. Department of the Interior.

But if the photograph seems too good to be true, that’s because it probably is, experts say.

“I don’t believe that it’s a bird taking a ride—I think it was just a well-timed shot,” says refuge manager Tom Cox. 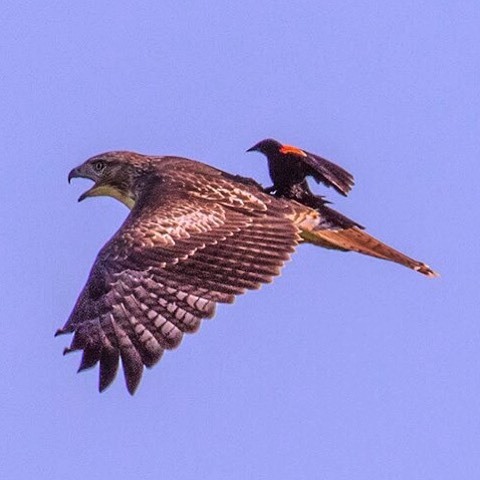 Check out this rare sight: A red-winged blackbird hitching a ride on a red-tailed hawk that Mike White spotted while visiting DeSoto and Boyer Chute National #WildlifeRefuge in #Nebraska and #Iowa. We see territorial blackbirds (among others) dive-bombing raptors, but this is definitely something you don’t see every day. Photo courtesy of Mike White.

Cox said the picture most likely captures a perfect moment during a fight between a blackbird and a hawk—and that blackbirds attacking and harassing hawks is actually quite common.

“In fact we probably see that occurrence of blackbirds dive-bombing red-tailed hawks about every day we’re in the field,” he says.

It also happens in other bird species: Crows have also been documented attacking eagles, as seen in these amazing photographs published in July.