WEATHER: Clear and calm until 9 am them increasing cloud and wind, rain later. Top temp 25C

The gorge at Mértola was such a favourite of the group that a second visit was inevitable, so today we trundled round there in two buses because the entire group turned out for this pre-breakfast trip. 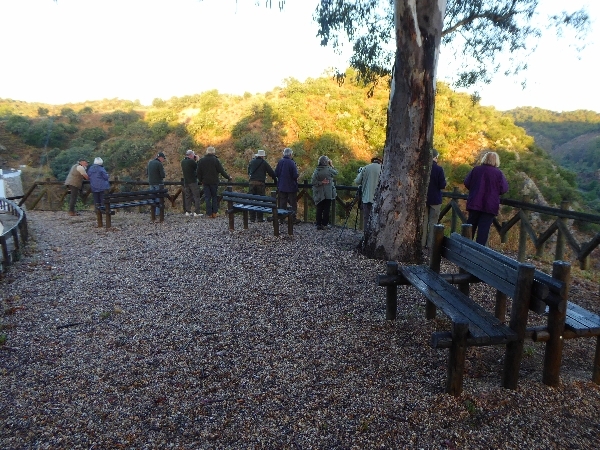 most of the group looking into the Gorge 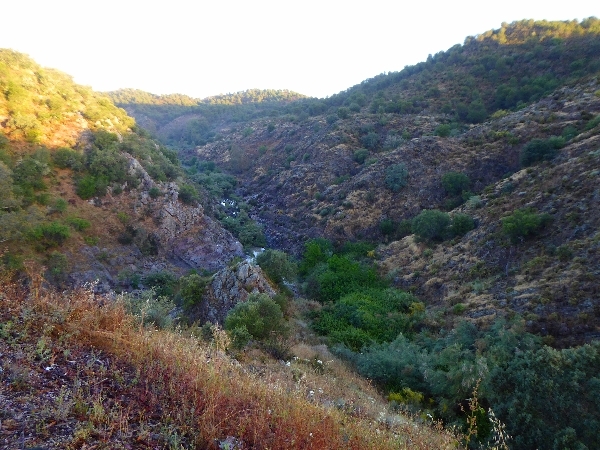 We saw most of the same species as before but we had much better views of Golden Oriole and Common Kingfisher and we added Grey Wagtail, Grey Heron and Serin to our Gorge sightings. The Lesser Kestrels that were nesting under the bridge performed very well giving excellent views. 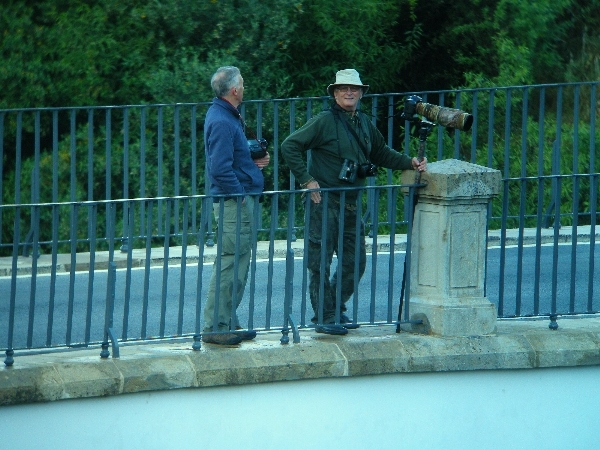 Bob and Terry our group-photographers, waiting for Lesser Kestrels to appear

By the time we finished breakfast is was 8:30am as we set off for Entradas and Castro Verde, we planned to scour the countryside along quiet lanes looking for Black Winged Kite, Spanish Imperial Eagle and Bustards. One group member had missed our ’bustard’ day so he wanted to catch up with Great and Little Bustards. From the hotel car park we had a great time watching a family party of Blue Rock Thrushes, two fledglings were being fed by the parent birds just a few meters from us, amazing views!

Well, a Little Bustard flew across the road in front of the leading bus making its display flight but at the time the guy who wanted to see it most had dozed off! We stopped and made a search without luck but we did find several Great Bustards for him, a good result!

A high ridge alongside the main road had the potential to produce raptors but today was most probably the worst day to look for them because of the weather. Thick cloud and strong south-westerly wind made it feel very cold and produced conditions that were unlikely for thermals to develop. We stayed for 30 minutes or so and saw a couple of Griffon Vultures, a Common Buzzard and a Short-toed Eagle. 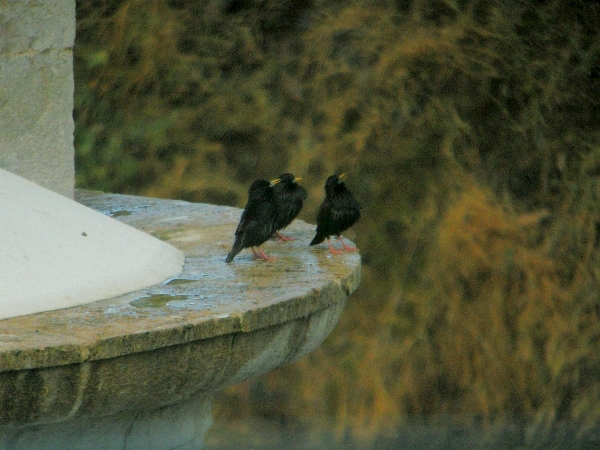 because of lack of pictures on this windy day I offer you my very bad record shot of Spotless Starlings taken this morning!

The road to Entradas has excellent habitat for the Black-winged Kite so we spent a good part of the morning along this quiet road. One stop produced some magical sightings, first we tracked down a couple of Woodlarks that were singing, then a Common Nightingale showed really well and an Iberian Woodpecker called but failed to show.

A large raptor made a very brief appearance behind some trees and I was convinced that we had found our prize, the SPANISH IMPERIAL EAGLE. Sure enough, after a tantalising wait the bird reappeared and was in fact a juvenile Imperial Eagle, wow! We all got to see it both in the scope and with binoculars a superb find! Whilst searching we all found a Black-winged Kite which showed briefly a couple of times but it was distant.

Other sightings along the road to Entradas included; Bee-eaters, Crested Larks, Common Stonechats, Corn Buntings, Cattle Egrets and a Black Kite. At the pool just outside Entradas we saw Great Crested Grebe, Eurasian Coot, Cattle Egret and Black-winged Stilt. A couple of Booted Eagles showed extremely well as they circled above us on the edge of the town.

Between Entradas and Castro Verde we noted a male Montagu’s Harrier and at Castro Verde we stopped for coffee and to buy picnic supplies. In very windy conditions we parked the buses behind some trees along a quiet lane, it was too windy to do any birding and during lunch the wind tore the rear door open of one of the vans and bent a hinge out of shape so that the door couldn’t close. So, for the rest of the afternoon the group wandered around town sight-seeing whilst we took the bus into a garage for repair, it was fixed by 6pm.

A lovely dinner was enjoyed by all, it was a joyous evening with plenty of laughter around the table. Tomorrow we are leaving Mértola to travel to the coast for our last 3 nights of the tour. We have seen 101 species including most of the ‘plains’ specialities.