It was ‘wader-day’ today, we saw 16 species of shore birds as well as some gulls, terns, herons and egrets. The first couple of hours were magical, we left the hotel just after 6am as it was just getting light, a beautiful sunrise was taking shape as we drove the short distance to an open tidal lagoon behind the hotel. 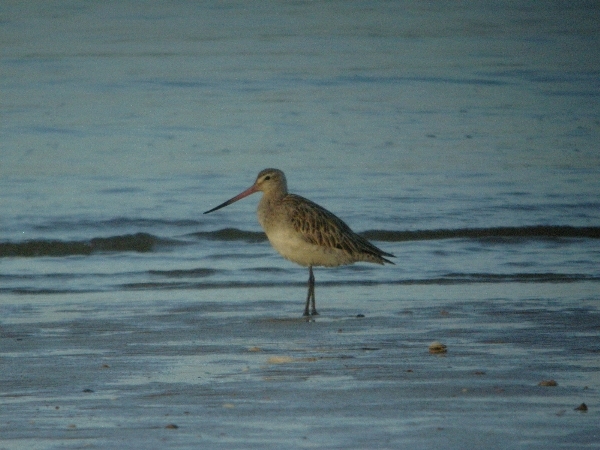 Apart from Eurasian Magpies and House Sparrows our first sighting was of two Stone Curlews they were on the side of the track and gave smashing views. A Little Owl sat on the ruins of an old fort nearby.

We parked near the water’s edge as the pink sky turned a deeper orange, then red, before a huge orange orb appeared over the horizon. During that beautiful sunrise the tide began to ebb and waders began to drop in not too far away, it was amazing how they just appeared as if by magic. 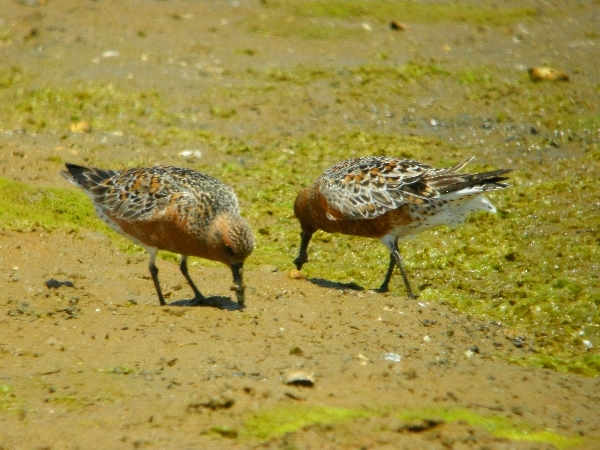 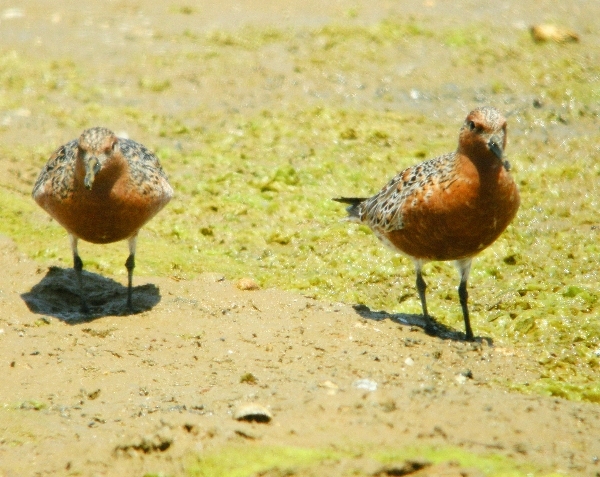 Seven Whimbrels landed nearby, then a dozen Bar-tailed Godwits joined then with a couple of Ruddy Turnstones none of them looked particularly colourful in their winter plumage. However, a small group of Red Knot were next to appear and they looked fabulous with bright red undersides and an array of colour on their backs.

During the next hour we enjoyed some superb bird watching and never moved more than 20 meters from the buses. Ringed & Kentish Plovers, Dunlin, Oystercatchers, Little & Sandwich Terns, Yellow-legged Gulls and Greater Flamingos all appeared before we went back for breakfast. 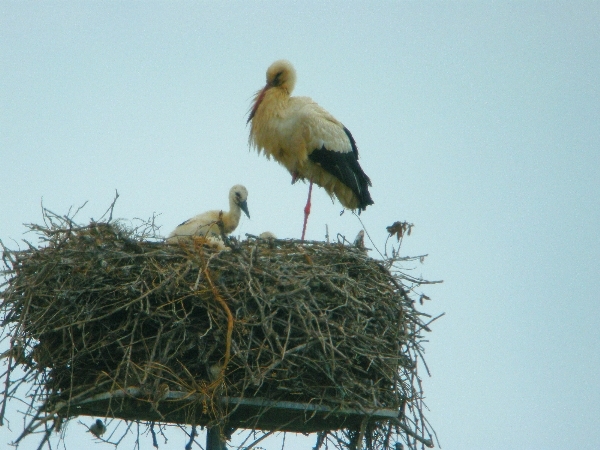 White Stork with chicks, platforms like this one are found all around the marshes

After breakfast we visited the nearby salt pans, the morning light was superb as we watched several more species of waders. Apart from the resident Black-winged Stilts and Pied Avocets we saw Sanderling, Curlew Sandpiper, Common Redshank, Common Tern, Slender-billed Gulls and a lovely, showy Little Owl.

To take break from wader-watching we next drove inland and followed the river along a lush-green valley. It was hard to find any tracks that were not fenced off so most of our birding was done from the roadside which was not too productive.

We stopped near a ford which had stepping stones, normally a recipe for disaster but no-one slipped into the water. We had lovely views of Serin and Greenfinches and during one stop on a narrow bridge we watched Common Waxbills (a very common ‘escaped’ species now breeding in the Iberian Peninsula) also Grey Wagtail and a very showy Common Nightingale. During our ‘valley run’ we also noted Blackcap, Woodchat Shrike, Long-tailed Tit and a distant Short-toed Eagle. 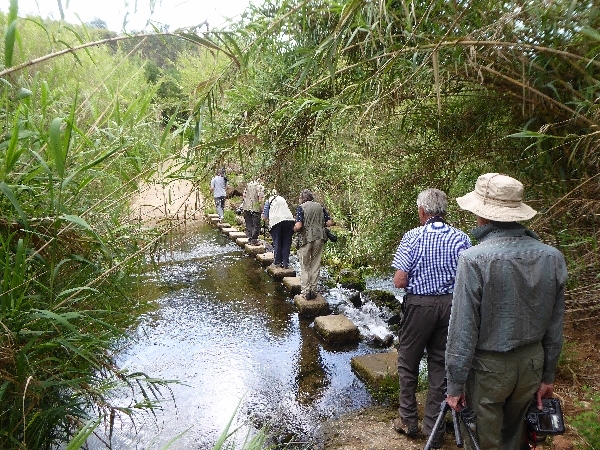 Back on the coast we stopped for a coffee and to buy lunch supplies and drove to Olháo to visit the Ria Formoso Natural Park at Quinto do Marim. After eating our picnic in the shade of Umbrella Pines we walked to the tidal lagoons which were just filling as the tide came in, perfect timing as many waders were flying in off the beaches. 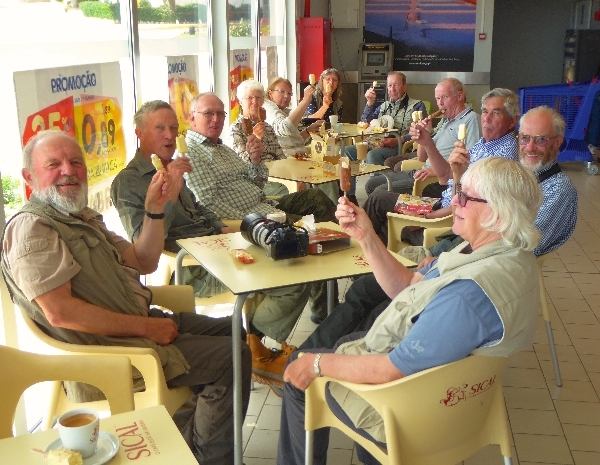 To get to the lagoons we walked through pine woodland where we stopped to watch Iberian Magpies, Turtle Doves, Short-toed Treecreeper, Eurasian Hoopoe and we had brief views of Golden Oriole, Sardinian Warblers were very common. 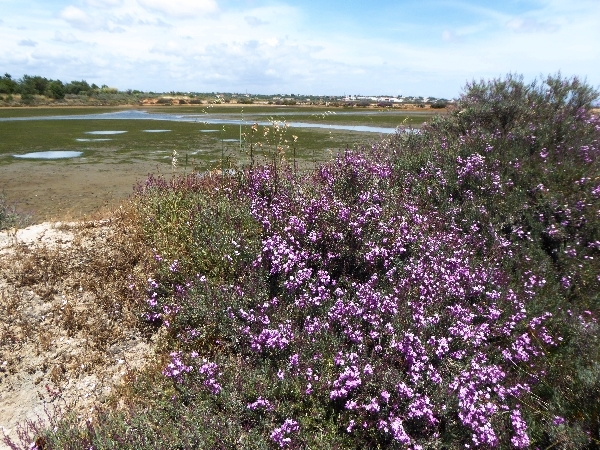 one of the lagoons during low tide

The weather was glorious a lovely cooling breeze came in off the sea as walked round the edge of the two lagoons. In superb afternoon light we watched many birds, mostly waders but egrets, spoonbill, flamingos, shelducks and terns were also very nice. 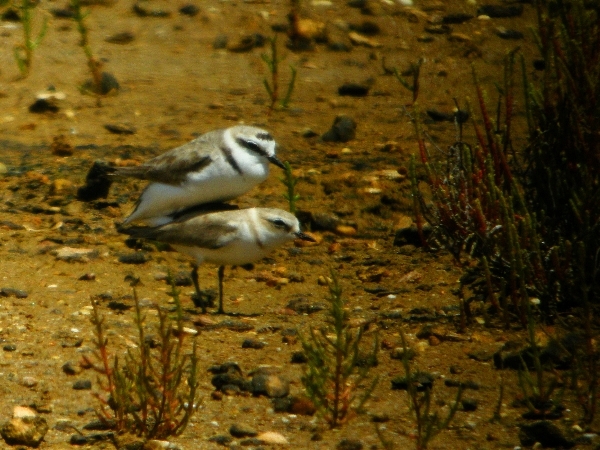 As the tide came in so more waders flew into the shallow ‘wader-lagoon’ and before long there were hundreds of them. We counted over 150 Bar-tailed Godwits, 40+ Red Knot, lots of Dunlin, Ringed & Kentish Plover, Ruddy Turnstone, with several Grey Plover, Curlew Sandpiper and Yellow Wagtails. 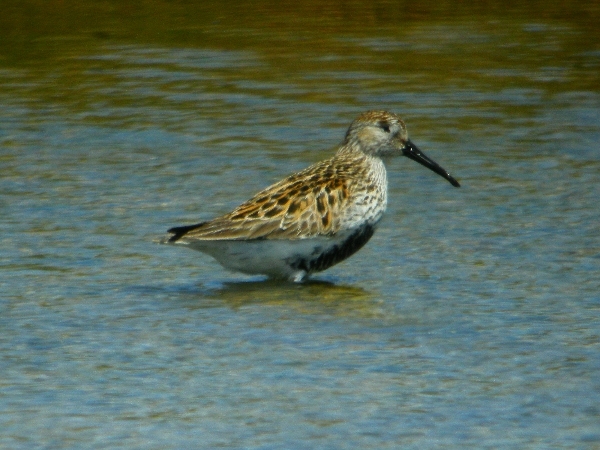 It was 4pm by the time we left the reserve, we made a quick stop at the salt pans where we saw Audouin’s Gulls, Northern Shoveler, Gadwall and lots of the same waders seen earlier today.