WEATHER; cloudy to start with, quite cold at first but warmer later.

The Ria Formosa Natural Park covers some 170 sq.kms and consists of a series of lagoons and a complex mosaic of islands that are protected naturally by a huge ‘barrier sand-bar’ from the onslaught of the Atlantic Ocean. It is a haven for migrating and breeding birds alike. 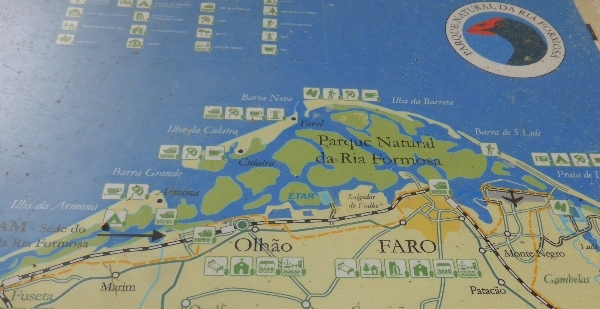 We had a superb day of coastal birding and if you like wader watching read on! We met at 6am, it was barely light but by the time we had loaded up the bus and set off we could see 100 meters in front of us. A Little Owl sat out on the ruins of a Castle next to the hotel and it was our first bird sighting of the day. 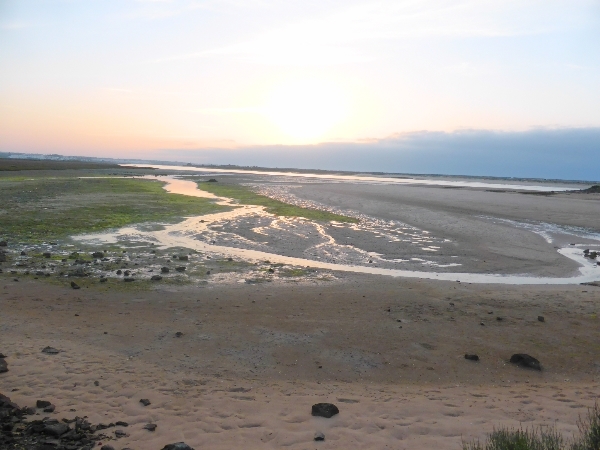 sunrise at the back of our hotel

The hotel backs onto to a large inlet, the Tavira Inlet, which is one of six that connect the protected lagoon system to the ocean, it is a great place to watch birds feeding as the tide recedes. We arrived just as the tide was turning, it was low and had just begun to advance. We found several Whimbrels and a single Eurasian Curlew feeding on the shore, it was nice to see them together so I could point out the differences of these two look-alike species.

A flock of some 50 Red Knot was the highlight of our morning’s birding, they looked fantastic in their brick-red plumage, we also found a couple of Bar-tailed Godwits, Ruddy Turnstone, Dunlin, Grey Plover, Kentish Plover, Sanderling, Greater Ringed Plover and some Little Terns. 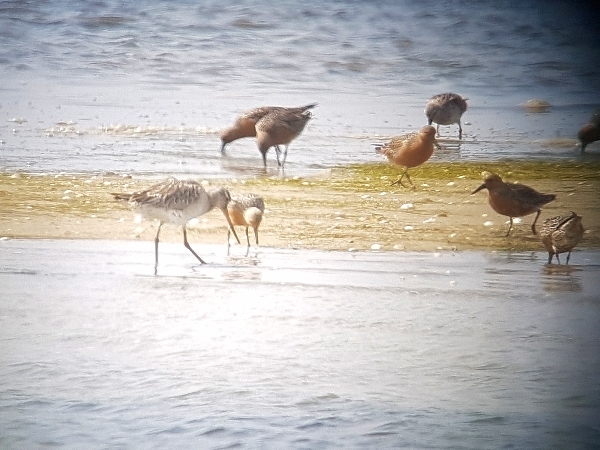 It was very cold out there, gloves and hats were required, neither of which had we brought with us, so we decided to go back for an early breakfast at 7am.

By 8:30am it had warmed considerably, the cloud cover was breaking up, it was a bright morning. It took about 40 minutes to reach the Ria Formoso Nature Reserve at Olháo we parked the bus and set off through a pine woodland towards the two main lagoons found at this site. In the woodland we watched Greenfinches, Serins, Sardinian Warblers, Iberian Magpies and our star bird was a male Golden Oriole, this bird called constantly and gave us a splendid but brief show. We also found Common Waxbill, a well-marked male was collecting nesting material on the side of the path, this exotic escapee species was enjoyed by my companions. 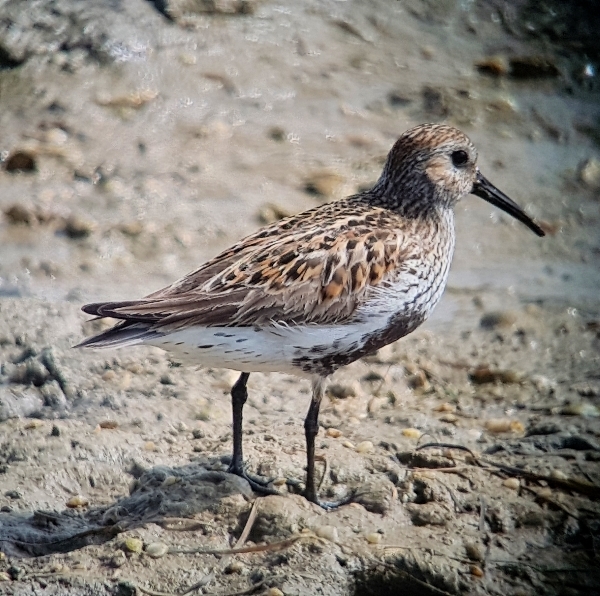 The tide was now almost fully in and the lagoons were filling up with waders as they were being pushed in off the beaches by the advancing tide. We saw all the same waders as we did this morning except they were in much lager numbers. We made it to a small headland where we watched a group of some 60 Red Knot feeding on a sand-bar with Bar-tailed Godwits, slowly the sand-bar disappeared and the birds flew over us into the lagoon. 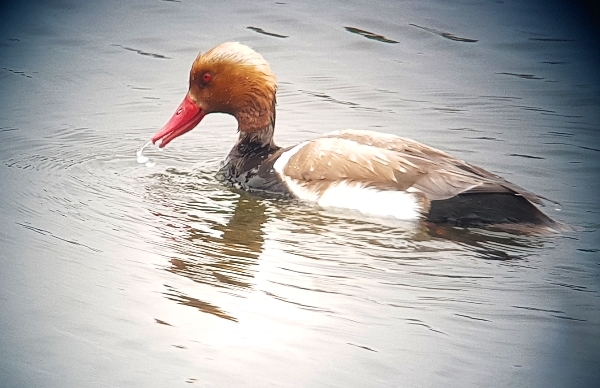 We spent a most enjoyable 2 ½ hours walking round this lovely reserve, the flowers were tremendous, the light was excellent and the birding was superb. A quick coffee and a visit to the supermarket saw us arrive at Faro Airport section of the Ria Formosa Natural Park. 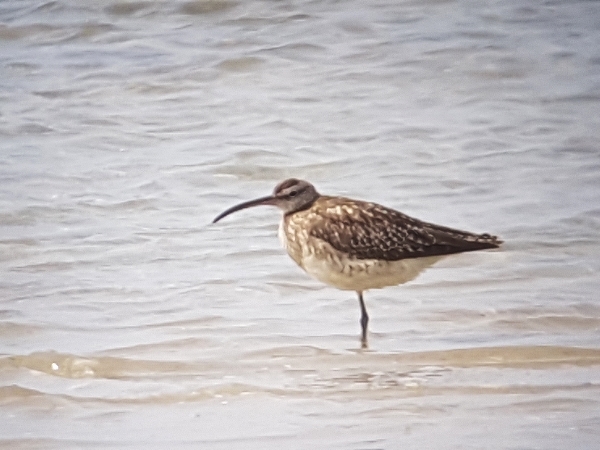 Whimbrel - wondering where all the water is coming from!

We drove through a Salt Works where huge Salt Pans held a lot of waders, the tide was at its highest now. We added Redshank and Greenshank to our list with Pied Avocets, Common Shelduck and lots of \Dunlin. One particular muddy lagoon held thousands of birds, a huge flock of Black-tailed Godwits were joined by even more Dunlin and Sanderling. A single Bar-tailed Godwit fed with these birds and again the comparison was made with the two look-alike Godwit species. We also found Little Stint and a couple of Curlew Sandpipers, I love wader watching it was hard to drag myself away from this spectacle. 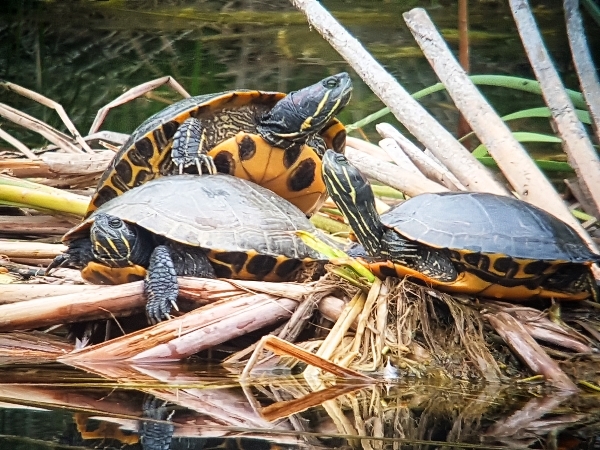 Our picnic lunch was consumed in the shade of a belt of pine trees next to a golf course, we searched for Wryneck in the trees without any luck. Our next walk took us along a path that skirts the golf course and leads you to the shore. A large elevated hide gives you excellent views over a lake on the edge of the golf course, it was full of birds. 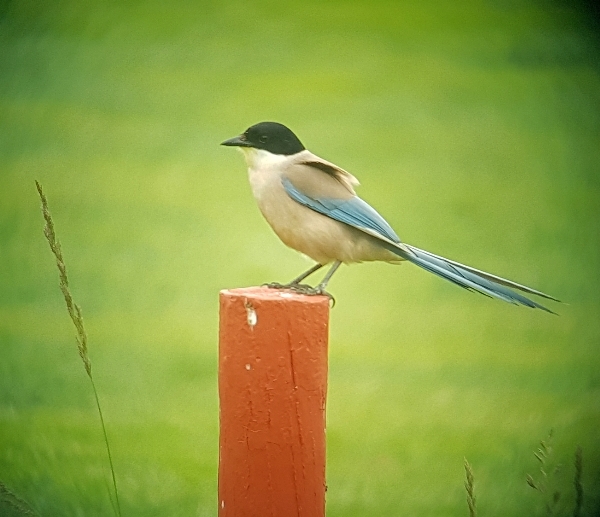 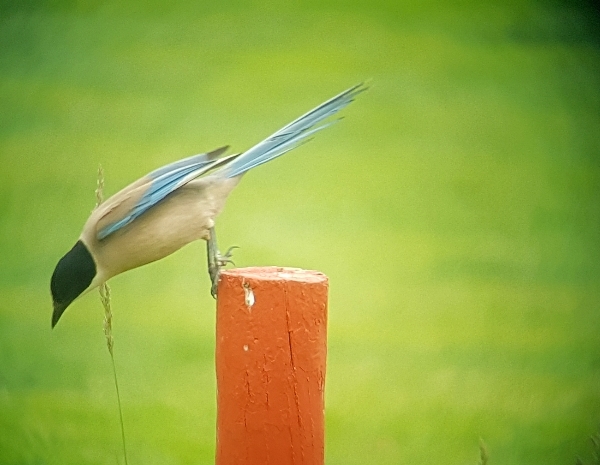 or perhaps a "Norwegian Blue Parrot" falling off its perch

We enjoyed out time there watching ducks, herons, egrets and grebes, We spent a lot of time searching the reed for Little Bittern but couldn’t find one, however, we enjoyed Purple Swamphen and a group of Black-headed Weavers, another exotic species, as they were making their ball-shaped nests. 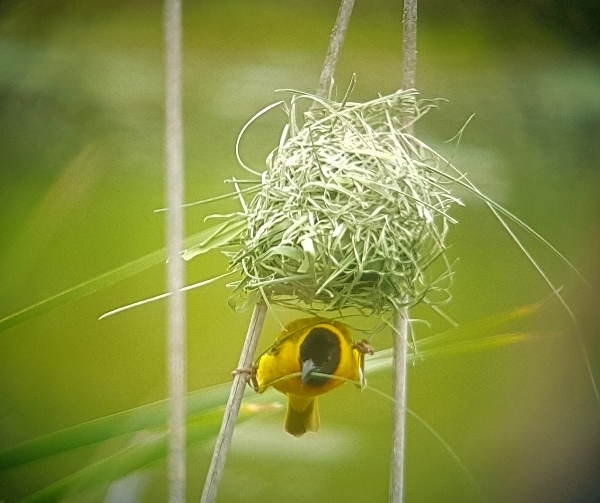 Just before we left the golf complex a flock of 10 Audouin’s Gulls dropped in and joined the Yellow-legged Gulls for a washing session in the middle of the lake, this was a nice species to finish with. We walked back to the bus and left the area. The drive back to Tavira took nearly an hour because of heavy traffic, the Little Owl was still sitting on the Castle Ruins when we got back, how nice for it to wait for us to return.