WEATHER; overcast to start, sunshine the rest of the day, very windy

Our last full day had arrived and we had several birds missing from the list especially gulls, terns and herons, so we planned to visit the large lagoon near Pera where some of our most-wanted species have been recorded in the past few years.

We had an early breakfast at 7am and not long after we were on the road heading towards Lisbon on the main autovia, it took about an hour to reach our destination, Lagoa dos Salgados. This huge body of water occupying about 150ha. Lies right on the coast separated from the sea by a barrier of sand dunes which are themselves interesting for their biological content especially; flowers, butterflies and birds.

As we approached the lagoon we could see many birds in and around the water, it looked promising, but it soon became apparent that most of the area was bone dry with very little water. Most of the reed-beds had dried up which greatly reduced our chances of seeing Purple & Squacco Herons, Little Bittern and Reed Warblers. 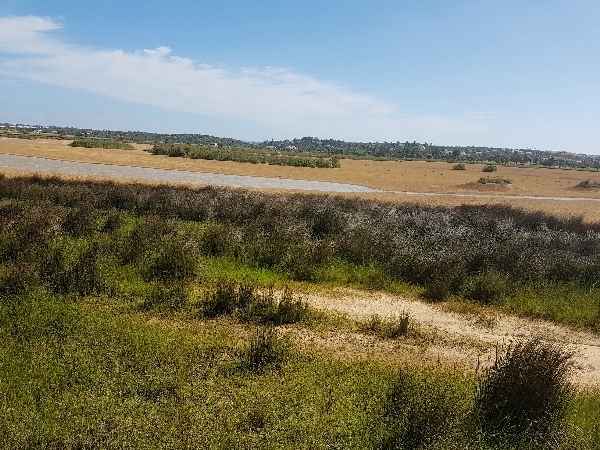 The sandy area should be covered in water!

The northern marsh area did hve water and this is where a large concentration of birds were gathered, we soon found lots of ducks; Mallards, Gadwalls, Shovelers, Red-crested & Common Pochards, we also saw Moorhen, Coot, Purple Swamphen, Little & Great Crested Grebes and to our great delight a Little Gull sat on a bank across the water. 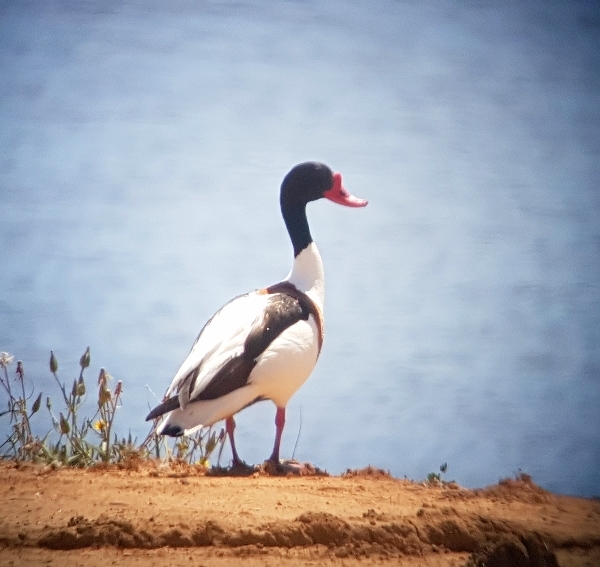 A walk around the northern perimeter gave us extended views of the water, we found Glossy Ibis, Eurasian Spoonbill, Great Cormorant, Common Shelduck and several species of waders including Pied Avocet, Black-winged Stilt, Redshank and Black-tailed Godwit, all species with long legs to cope with wading in deeper water as there wasn’t any mud-margin around this part of the lagoon.

Towards the southern end and nearest the beach area the lagoon was completely dry except for a couple of channels and one or two small pools, there was a large gull roost close to a viewing-blind and many waders were using the pools to feed in. Apart from Yellow-legged Gulls we saw Lesser Black-backed and Audouin’s Gulls and the waders were mainly Dunlin, Avocet and Black-winged Stilts but we also saw Sanderling, Red Knot, Grey Plover, Kentish Plover, Greater Ringed Plover and Common Sandpiper. 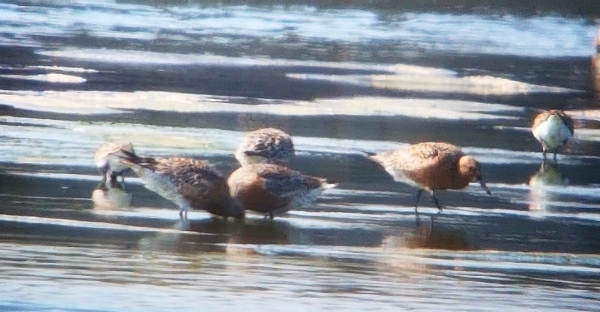 At the beach-end of the lagoon a raised boardwalk takes you through extensive reed-beds to a raised hide, but because of the wind and the dryness of the area there were no birds seen there. We scrambled up over the dunes towards the beach for spell of sea-watching and we ‘kicked’ up a Stone Curlew and a couple of Short-toed Larks with Crested Larks being also seen. 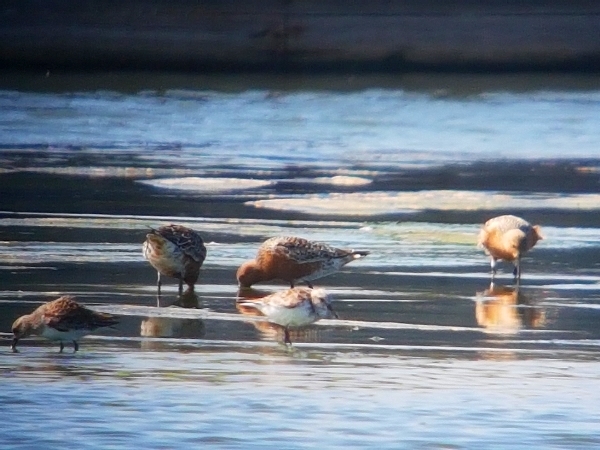 A couple of Sanderling in the foreground with Red Knot

Behind the dunes we were sheltered from the wind, it was quite pleasant sitting on the sand with our scopes looking out to sea. A small number of Northern Gannets were seen with a good many Yellow-legged Gulls but that was it! No further sightings were made.

Before we ate our lunch, we drove to the mouth of the Ribeira de Alcantarilha on the outskirts of Armação de Pera, the potential of the area looked good but the windy conditions and the number of tourists made finding birds difficult. We did see Little Egret, Grey Heron, Sardinian Warbler and Zitting Cisticola. A couple of Alpine Swifts flew low over us with Common and Pallid Swifts and a few Barn Swallows.

For lunch we drove to find shelter from the wind behind the walls of a derelict farm, we saw more Alpine Swifts, Red-rumped and Barn Swallows, a small migration passage of swifts and hirundines was taking place. |The same thing happened half-an-hour later as we sat out on a terrace of a bar whilst drinking coffee, small numbers of Alpine Swifts went over.

For the rest of the afternoon we drove into Faro and parked not far from the airport to explore another section of the Ria Formosa Nature Reserve. We walked along a newly constructed promenade where panoramic views of the marshes could be had, however, the tide was in and so very few birds could be seen. A flock of Greater Flamingos was nice to see and we did find several wader species, Common Shelduck and lots of Yellow-legged Gulls.

Finally we stopped at the salt pans very close to the hotel and in the afternoon sunshine we watch many waders and a few ducks, none of which were new for the list but a couple of Curlew Sandpipers were nice to see and much closer than the two we saw the other day.

We finished our birding early so that we could get ready for dinner early, we met at 6:30 to complete the bird log and ate at 7pm so that we could go back out again at 8:30 for a Nightjar excursion. All went to plan we arrived at dusk at the nightjar site and as soon as we got out of the bus we heard one calling nearby. After waiting several minutes we had very brief views of one in flight and over the next 15 minutes as it got dark we saw another birds briefly. It was a little disappointing but the windy conditions did not help.