WEATHER; our hottest day yet, 34C with reduced wind, it felt hot today.

Still not convinced that the Ria Gilao Valley was bird-less we made an early morning excursion arriving there just as it got light at 6:15am. Boy was that a waste of time! Not many birds at all turned up, a nice pale morph Booted Eagle was nice. So we drove further up the valley and tried a couple of other places. We found Common Nightingale, Rock Bunting, Corn Bunting, Eurasian Jay, many Iberian Magpies but not much else and certainly no warblers. 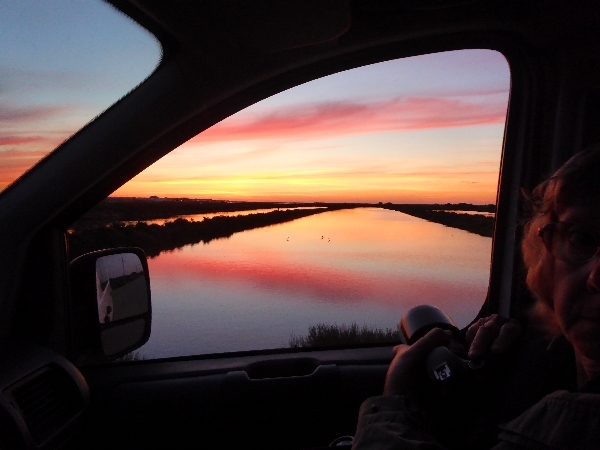 The salt pans from the bus this morning 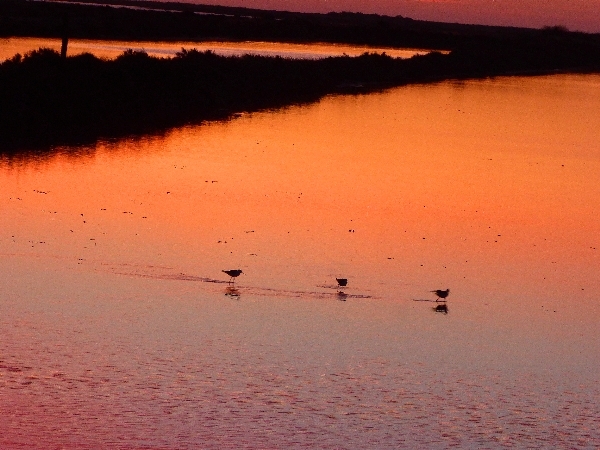 3 Black-winged Stilts in the magnificent sunrise this morning

After breakfast we packed the bus with all of our luggage and left the hotel for good, the regular Little Owls turned out to wave us goodbye. As we had most of the day to fill we decided to visit both the eastern and western extremes of the Algarve with Monte Gordo in the east being our first destination.

We parked at the entrance of the small Monte Gordo nature reserve where mature pine woodland surrounded a reed-fringed Pool. It was already feeling very warm and it was not yet 10am! Over the next hour we found a number of excellent species including one or two missing from our list. Crested Tits appeared in a number of locations and we all got to see them, likewise Long-tailed Tit and Turtle Dove, but Common Cuckoo and Short-toed Treecreeper were seen by just a few. A short stop at Castro Marim salt pans produced nothing new but a few wader species and Little Terns were nice sightings in good light.

Next we spent an hour driving the length of the Algarve, some 96 kilometers to visit the large Lagoon at Pera which was to be our last birding venue of the holiday. We arrived around 1pm so we stopped to eat our picnic lunch in the car park. The lake itself was huge with reed-beds, islands, sand-bars and an outlet to the sea making it both brackish and tidal, a recipe for great birding. 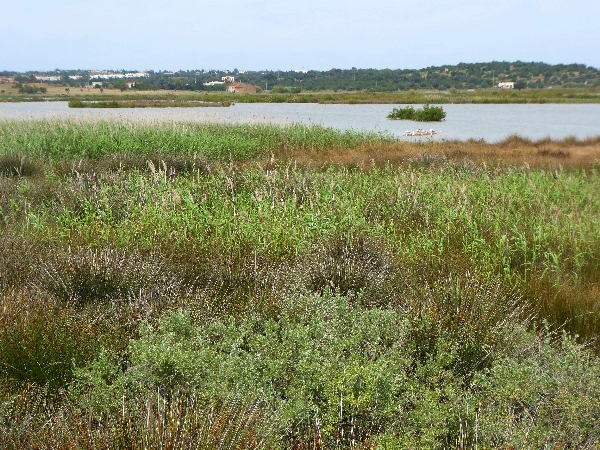 The tide was high so exposed mud and resting places were a premium to the birds, Yellow-legged Gull flocks were joined by a dozen or so of Audouin’s Gulls and a couple of 2nd Year Lesser Black- backed Gulls. Dozens of Eurasian Coots fed across the lake with Northern Shoveler, Gadwall, Common Pochard, Little Grebe, Common Moorhens and we watched Western Swamphens in the reeds. 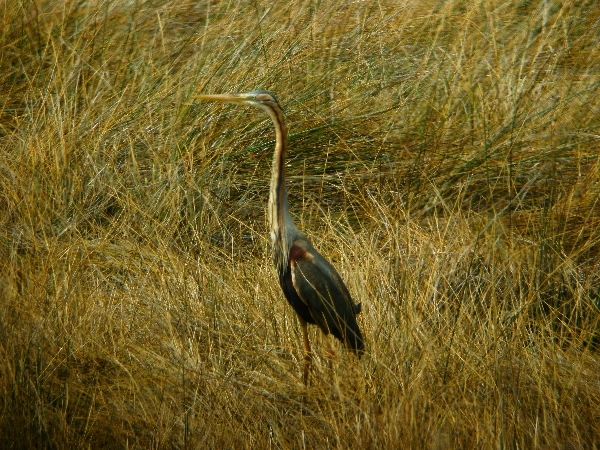 During our walk around the edge of the lake we added both Grey & Purple Herons to our list, also Reed Warbler, Zitting Cisticola and we saw a Little Bittern in flight. On the sand dunes we added Crested and Greater Short-toed Larks but a sea watch produced nothing but a pair of Mallards!

All too soon it was time to leave for the airport, so off we went. Everyone was dropped off at the terminal, the buses were returned, the trip was over. We had had a great week, a little windy at times, with some rain and the last couple of days were very warm. However, our bird list was encouraging, we had seen nearly all of our target species with 135 on the list and 4 more heard not seen. Not a bad effort at all.

If you have enjoyed this blog of our adventure to Portugal perhaps you would like to join us next year? Get in touch now!