Our early morning walk found us at the tunnel on the approach road to the hotel at 7am but not before enjoying some great views of Crested Tit in the hotel garden. We also saw Blackcap and Yellowhammer and we could hear Robin, Garden Warbler and a distant Song Thrush, one or two of the group heard Tawny Owl during the night. 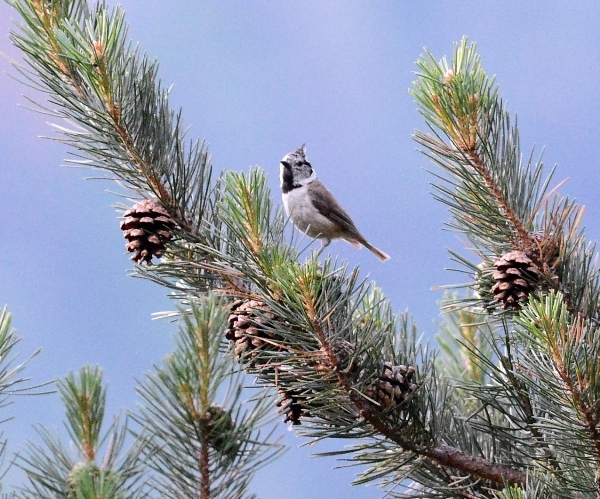 Crested Tit in the garden - by Bob Longhorn

At the tunnel we watched several pairs of Crag Martins, they had built their nests in the tunnel we counted 8 nests. A flock of Long-tailed Tits were new for our list, we scoped a Grey Heron in the river far below us and the obligatory low-level Egyptian Vulture drifted past.

For our birding today we first drove down the valley to the lowlands to visit a few areas around the River Aragon hoping for sightings of a couple of warblers missing from our list. A small areas of oak trees on the Alastuey road was our first destination. 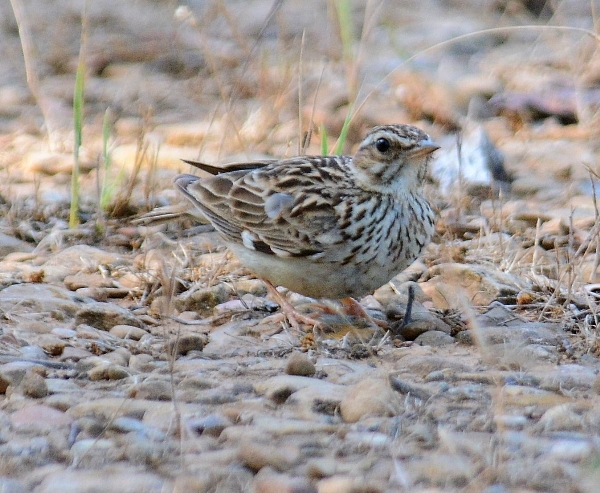 A Eurasian Hoopoe was spotted as we pulled up in the bus, it fed on ground not far away and remained in view as we all got out of the bus, we found a Woodlark also on the ground in the same area. After a short walk we found our first warbler of the day, it was a Subalpine Warbler and it showed intermittently as it sang from various bushes. We also had superb views of a Firecrest this little gem showed very well and at close quarters, what a little beauty. 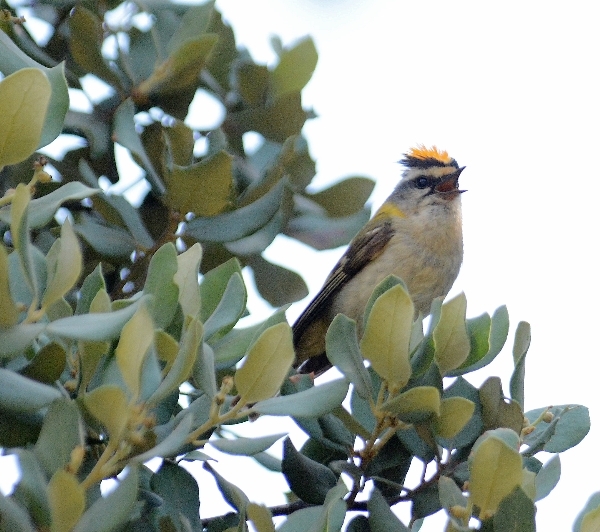 a superb capture by Bob Longhorn

Not far along the main highway to Jaca we turned off on a small track and arrived at a bridge over the river, a short walk was disappointing, the area seemed very quiet and bereft of birds. A single Common Sandpiper was seen on rocks in the river, we also saw a couple of Serins and we heard Common Nightingale, Blackcap and a distant Turtle Dove. As we got back into the bus a Great-spotted Woodpecker flew across the river, but only I saw it!

At Santa Cilia aerodrome we searched for Tawny Pipit and in doing so we found Melodious Warbler, Crested Lark, Skylark and a good number of raptors. The airfield sits on a plateau which is obviously good for thermals (there is a gliding club found there) so many raptors gather there, we saw both Red & Black Kites, Common Buzzard, Booted and Short-toed Eagles, the latter carrying a snake, Griffon and Egyptian Vultures. We did find a Tawny Pipit and we found a number of butterflies one of which, the Spanish Purple Hairstreak, was new for me! 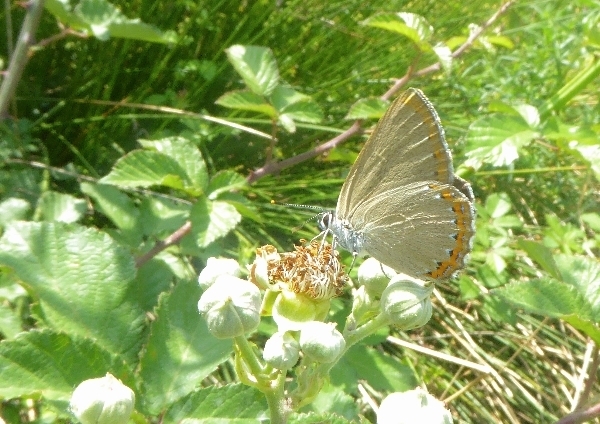 my first ever Spanish Purple Hairstreak

Next we drove into the centre of Jaca to the citadel, an ancient monument surrounded by parkland where both Rock and Tree Sparrows breed in good numbers. We saw both species during our short visit as well as good numbers of Common Swifts, also Black Redstart, Red Kite and plenty of Blackbirds.

We stopped to eat our lunch as we drove up towards Candanchu, we parked in a picnic area next to the river. A Garden Warbler showed well as we ate, we also watched Common Nightingale, White Wagtail and Common Chaffinch. A little further up the road we stopped for coffee at a café next to the river where we saw lots of Grey Wagtails and Bobby (Long-Lens) Longhorn saw a Dipper. 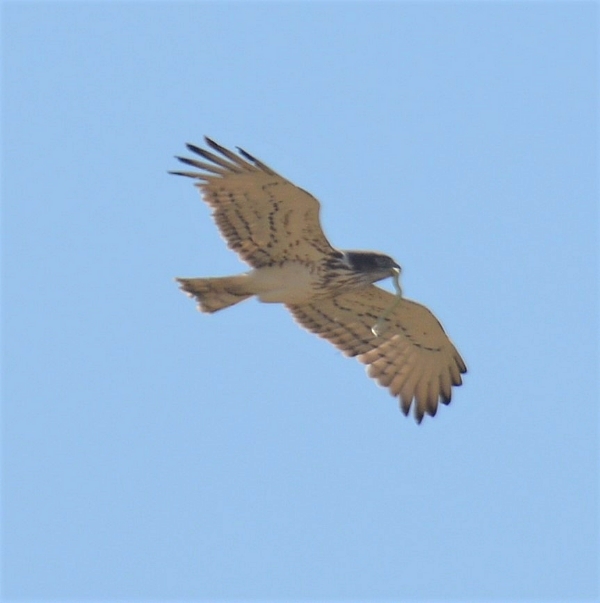 At Candanchu we took in the magnificent scenery as we walked into the main skiing arena, a huge grass-covered valley stretched out in front of us whilst strings of chair lifts lay lifeless like avenues of stricken trees, frozen in situ.  We heard Common Quail calling from all directions, near and far, the grass was barely 10cms long and yet eight pairs of eyes could not see a single one of them, it was amazing, we walked to where they called from and they simply moved away and began calling again without showing a feather! 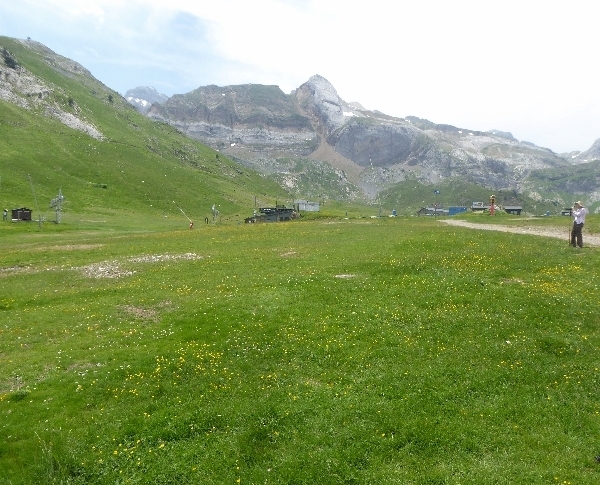 the ski slopes at Candanchu

Despite not seeing the Quails we enjoyed our visit there, large groups Alpine Choughs and some Red-billed Choughs entertained us as did Northern Wheatear, Black Redstart, Yellowhammers and an Alpine Marmot. We couldn’t find a Common Rock Thrush, a Blue Rock Thrush appeared briefly but not our main target bird, however we had a great time watching Water Pipits, Linnets, family parties of Northern Wheatears and lots of the ever-present Alpine Chough, a new species for most of the group. 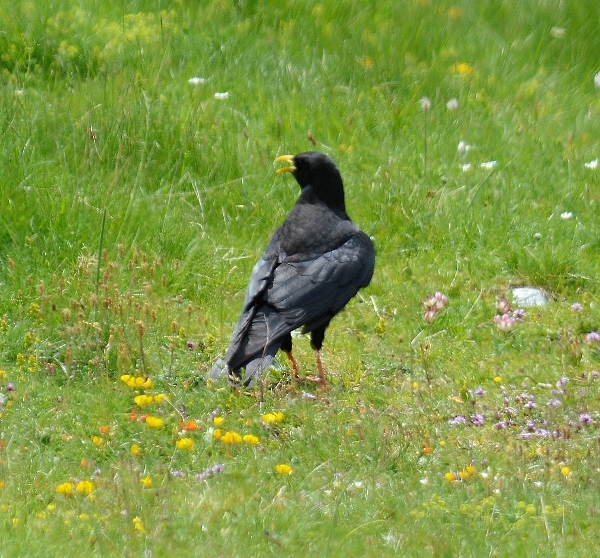 one of many Alpine Chough - Bob Longhorn

After a brief excursion over the border into France, where we added Common Chaffinch, Griffon Vulture and Blackcap to our French-list, we drove to another Ski Resort called Astun. We spent an hour or so searching the river and the ski-slopes for Dipper and Rock Thrush. 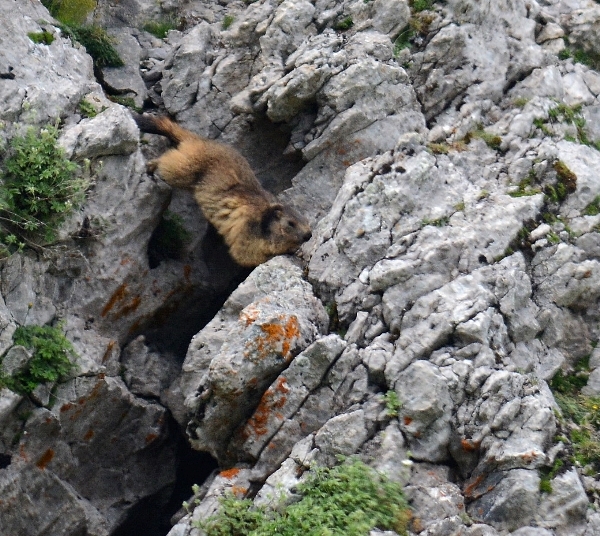 Five of the group went off for a walk whilst I stayed with the bus and the other two group members. We found Dippers, a family party, the others spent a lot of time watching Water Pipits! We met up again at the far end of the skiing village where we all enjoyed scope views of a pair of Common Rock Thrushes at last!

It took just over an hour to drive back to the hotel where  nice cold beer was enjoyed before a lovely evening meal. Our bird-log was called before we ate, we now have around 120 species on the list.