WEATHER:  a bright start but windy and cold, cloudy later and still cold

I still cannot believe that we are almost at mid-summers day and yet it is so cold and cloudy, IN SPAIN !!!!. We began with a clear sky at 7am as we emerged from the hotel for our pre-breakfast morning walk. It was a little windy but that didn’t stop a few birds from singing, we heard Blackcap, Blackbird, Robin, Wren and a Serin as we walked down the driveway. Our first sighting was of Egyptian and Griffon Vultures, the former caused quite a stir when it was mistaken for a Lammergeier by some of the group!

In the fir trees in the garden we found a Firecrest which showed extremely well before we continued our walk along the lane to the river. We stopped to look for a few species, finding Coal Tit and not much else. At the river, which was flowing fast and full to breaking point we found Grey Wagtail and much to our surprise a Dipper.

On the way back we saw Crested Tit, Coal Tit and another Red-backed Shrike which sat on a wire in the garden where we also found a Greater Butterfly Orchid. 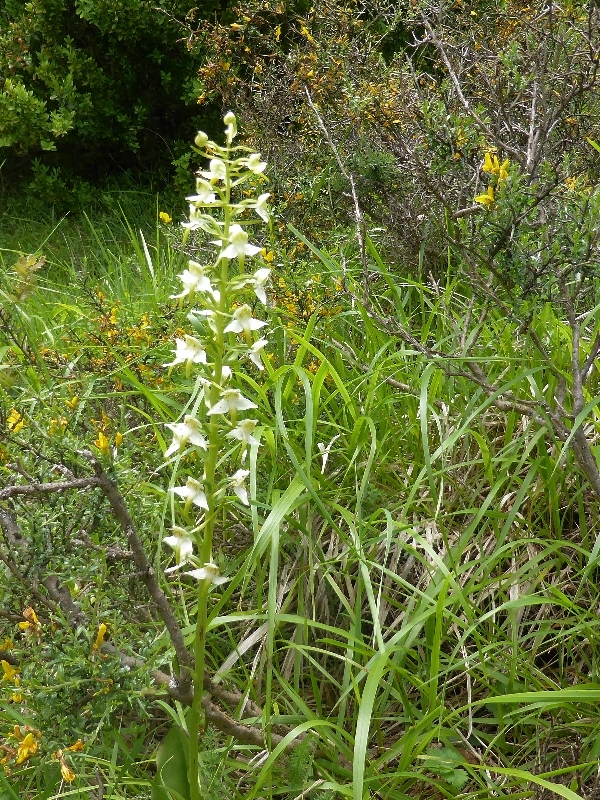 A Greater Butterfly Orchid found in the grounds of the hotel

After Breakfast we drove up the mountain track to Gabardito Refugio where we intended to spend the morning on the trail to the well-known Wallcreeper site. We saw Jay, Mistle Thrush, Robin, Chaffinches and a possible Bullfinch on the way up. As soon as we arrived at the Refugio we flushed two finches from the side of the road, they landed in a dead not too far away. We quickly identified them as CITRIL FINCHES, they proceeded to have sex right in front of us, such cheek! 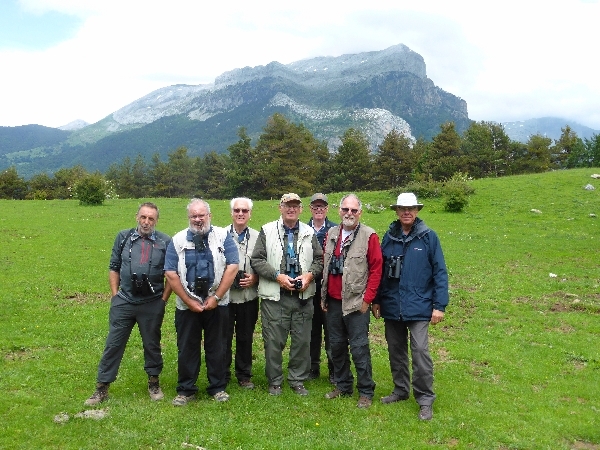 The Mag 7 from Worcester RSPB Group conquor the Pyrenees

Once we parked up and got out of the bus we found another four CITRIL FINCHES as they were coming down to a stream to drink, a marvellous sighting.  Then we set off for the walk to the Wallcreeper site passing through pine forest, beech woodland and alpine meadows. We heard several species but only saw a few birds during the walk such as Coal Tit, Chaffinch, Raven, Griffon Vulture, Red-billed Chough, 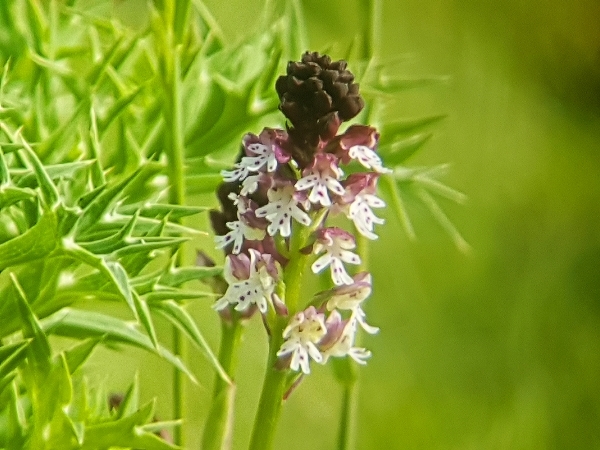 No Butterflies were flying and very few plants were flowering, we did find Burnt Tip Orchids but not much else. As we walked through alpine meadows we listed Eurasian Chiffchaff (h), Garden Warbler, Green Woodpecker (h), Crag Martin, House Martin and Common Swift. Then we found a LAMMERGEIER, it circled round a distant peak, a second bird appeared, wow! They drifted around for 5 minutes before heading towards us, they got much nearer before disappearing behind a section of rock just across the valley us, fantastic! 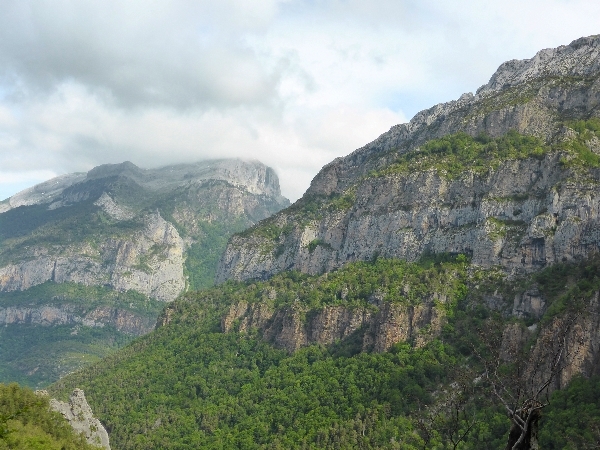 We settled down for the Wallcreeper vigil, another group of birders were already there and hadn’t seen one yet. Well, we waited for two hours but there was no sign of the wallcreeper, we enjoyed sightings of both species of chough, with Alpine Choughs in good numbers. We also watched Black Redstart, Alpine Swifts, both Booted and Short-toed Eagles and an extremely high Honey Buzzard (only seen by one of our group). 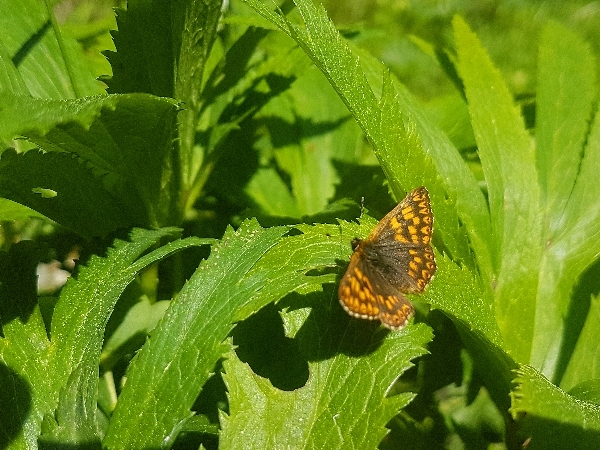 We gave up after another 30 minutes and headed back to the bus, we heard later that the other group waited another two hours without a sighting. The walk back produced one or two butterflies as the sun came out briefly but it remained cold. Duke of Burgundy, Small White and Red Admiral was all we saw and to think last year we listed nearly 70 species of butterflies on the same date. 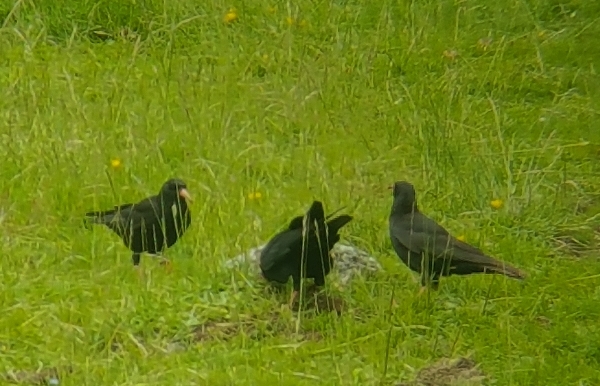 Our picnic lunch was taken back at the rufugio, nothing of note appeared whilst we ate. After a brief stop back at the hotel we drove up through the impressive Boco de Infierno (devil’s mouth gorge) it was made more impressive by the river which was a raging torrent and many streams poured onto the road giving the bus many showers.

For the next two hours we walked further up the Hecho Valley towards the border with France, it was very chilly, but we enjoyed ourselves watching some birds and many orchids. We found plenty of Yellowhammers, a few Dunnocks (heard more than seen), Linnets and Red-billed Choughs. The low cloud prevented many eagle sightings, but we did see Short-toed Eagle and many Egyptian & Griffon Vultures. 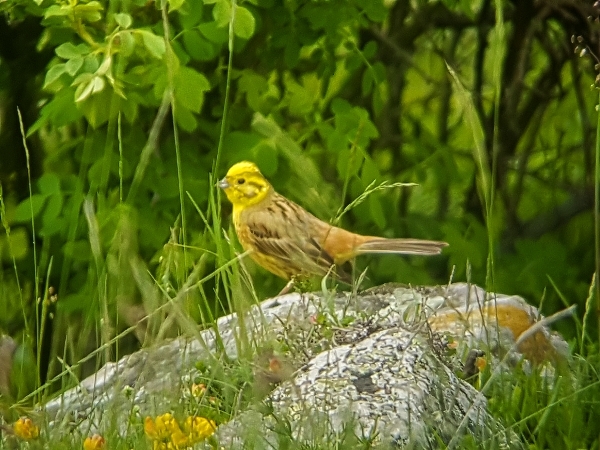 Near the head of the valley I returned to the bus to drive it up to the group and whilst I was away they found a BLACK WOODPECKER, oh bother! When I returned a second woodpecker appeared which was only the smaller Green version. But a little further on we found another pair of LAMMERGEIERS. This time we watched them for ages, one was carrying nesting material and we followed in our bins to their nest. We walked much closer and scoped the nest site we then had great views of the perched birds, fantastic birding, we forgot the cold as we enjoyed the spectacle. 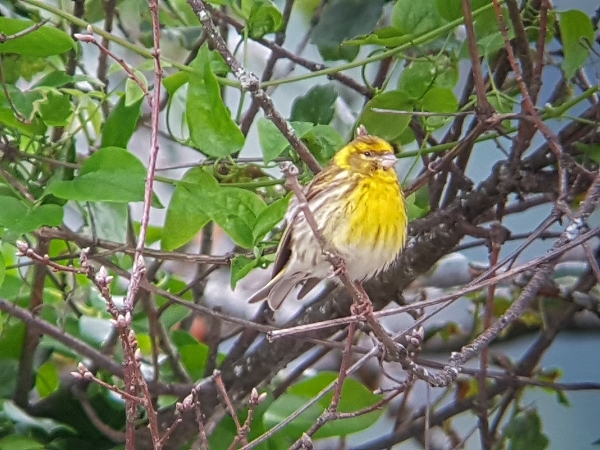 Serin found in the car park of the hotel

Back at the bus at 5pm we returned to the hotel to get warm and ready for dinner, which was excellent, great food, nice wine and plenty of banter, agreat way to finish the day.