Our big day had arrived, we were going up into the peaks of the Picos using the 'Teleferico' cable car to look for Alpine species.......

This was it, the reason why we came all this way, our day up in the high peaks was here! We were catching the cable-car to look for specialist altitude species and to see some of the most spectacular and unusual landscapes seen anywhere else in Europe. 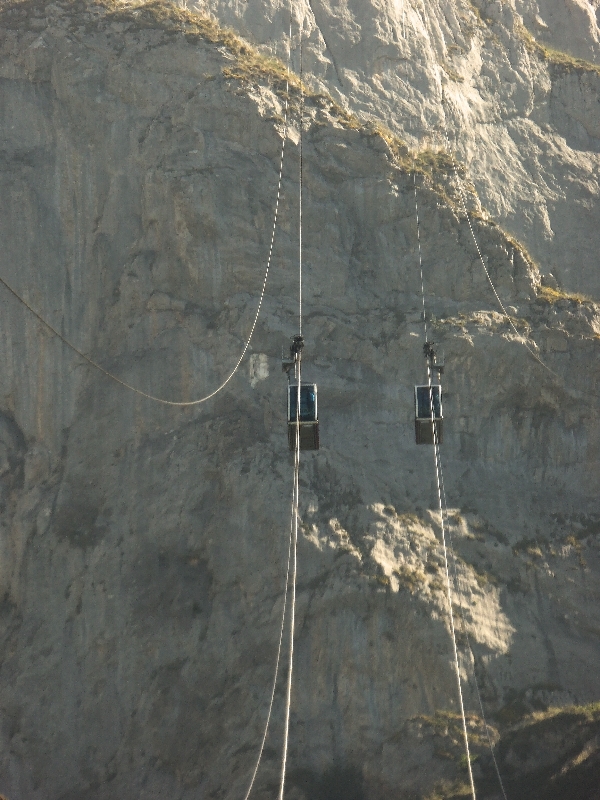 We ate breakfast at 8am and set off to Fuente De arriving at 9am, we made sure we that we allowed plenty of time because there can be large queues at weekends. We were one of the first to arrive and got on the second car that went up, this incredible journey takes 3 minutes to rise 754 meters reaching a height of 1824 meters above sea-level at the top. 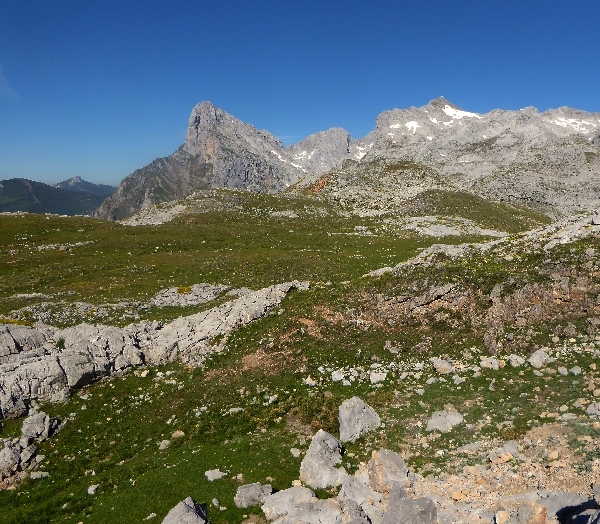 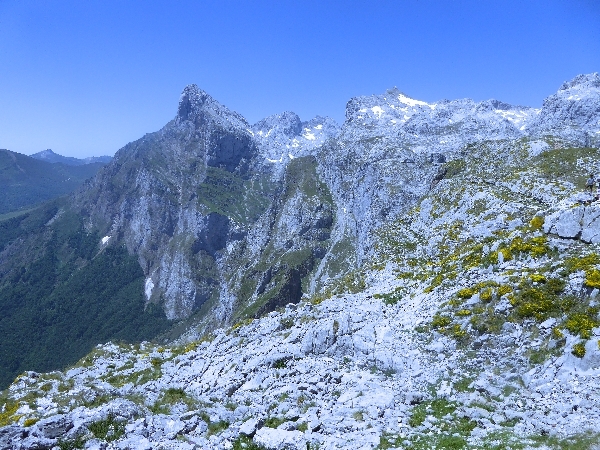 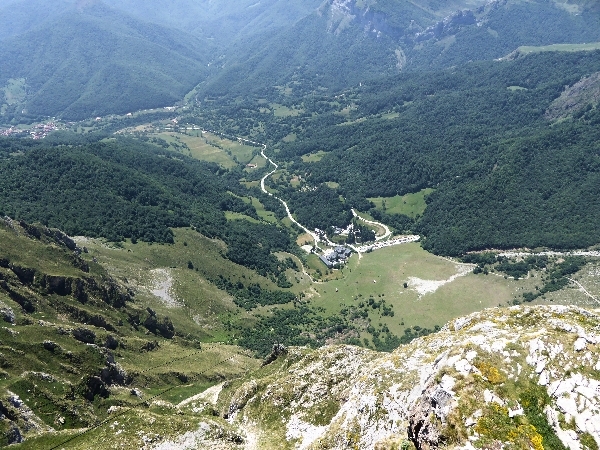 A VIEW LOOKING DOWN TO WHERE WE BOARDED THE TELEFERICO

The weather was superb, absolutely clear with no wind and excellent light, we began our walk and it wasn’t long before we found our first birds. A Northern Wheatear sang and displayed, so did a Water Pipit and they both landed on rocks not too far from the path.

Both Red-billed and Alpine Chough flew over every few minutes and we could see many Griffon Vultures circling the peaks ahead of us but overall there weren’t too many birds or butterflies to look at. A little further along the path we listed Black Restart and Linnet and then one of main target birds flew over, a male SNOW FINCH, it was brief but unmistakeable. 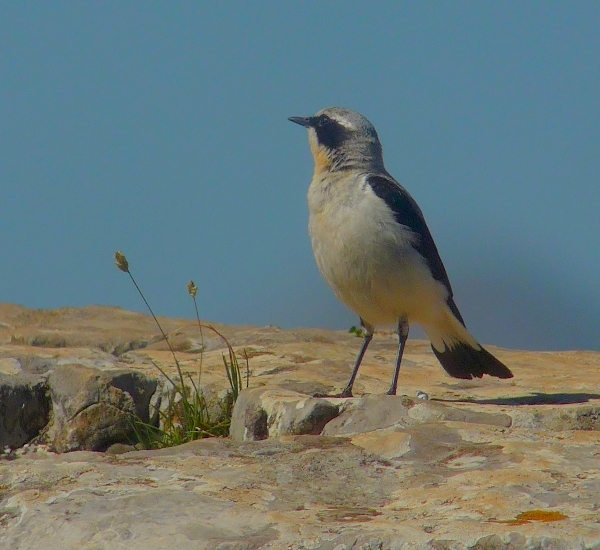 As we approached the huge cliff-face of Peñon Vieja (this rises to 2540 meters) we could see several SNOW FINCHES as they visited their nest sites hidden high up small fissures. There were probably about a dozen pairs in this area.

We spent the next hour watching them, Mike and I from one side and David and Catriona from the around the corner. We finally found an ALPINE ACCENTOR collecting food down below us, it was a long way down but it flew up towards us carrying food. We then found a couple of Chamois feeding on the slope above us. 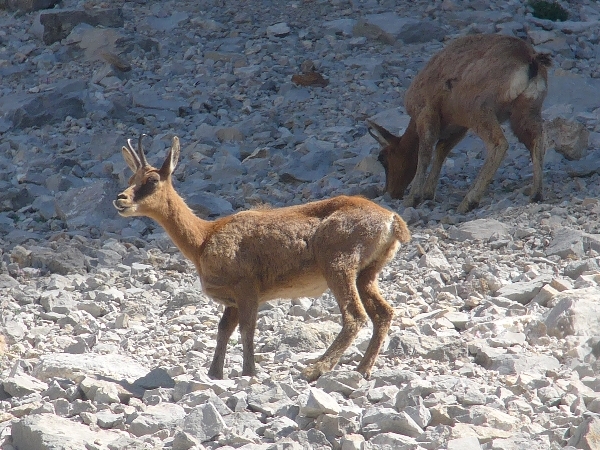 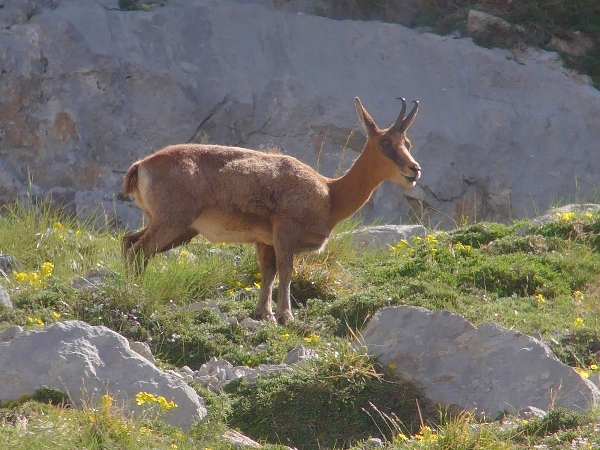 We ate lunch sitting on the side of the track, we watched SNOW FINCHES, Griffon Vultures and a Short-toed Eagle passed over but it was very high up. The area was getting very crowded with day trippers, hundreds were pouring out onto the tracks, there were climbers, cyclists, trekkers, walkers, ramblers and family parties. We decided to leave at 1:30pm and got back down to the car park by 2pm, it was very crowded there so we drove the 7km back to the hotel where we to took a break during the heat of the afternoon. 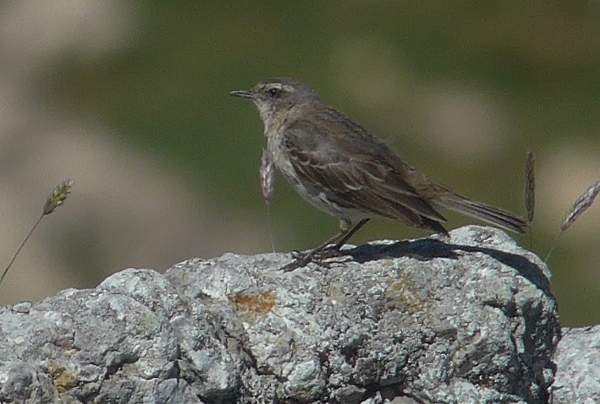 At 3:30pm it was still very hot but we still decided to take a walk in the hills above the hotel, it would be cooler beneath the trees so we drove the short distance to Pembes, an unspoilt village nestled in beech forest some 10km away. The village is like a living museum, ram-shackled buildings dating some 200 years old look as though they might fall at any moment. Whilst others look neat and tidy and well tended, the village is a haven for birds. We saw White Wagtails, Black Redstarts, Spotted Flycatchers, Serins, Barn Swallows and hundreds of House Sparrows, all using the old buildings for nesting in.

Just outside the village we found a family party of Common Redstarts, some Jays and several Goldfinch flocks, we continued up a steep path into the beech woods hoping for a sighting of a MIDDLE SPOTTED WOODPECKER but we never saw much at all, we heard Eurasian Nuthatch and Bullfinch but not a sight nor sound of any woodpeckers. 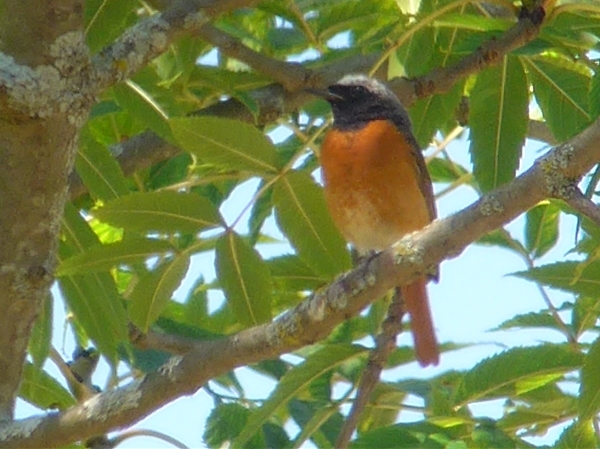 On the way down we paid more attention to the sky and saw a couple of pairs of Common Buzzards, a Eurasian Sparrowhawk and we spotted a very large raptor in the distance, this turned out to be a GOLDEN EAGLE (yet another distant sighting of this species).

We returned to the hotel at 6pm in good time for dinner which was taken on the terrace, a lovely beef steak and a glass of red wine finished off a lovely day.