We had superb day today, all of yesterday’s stressful travel was behind us, we had had a good sleep and a good dose of birding was what we needed now. It is such a good idea to arrive a day early and be rested before the tour!

We started our official day in the semi-dark!! We met at 6:30am and walked up to the plaza for breakfast, the only café open was packed so we spent some time walking around the centre of the plaza where some very large fir trees grow with ash and plane trees. We found Coal Tit, Great Tit, Monk Parakeet, Spotless Starling, Collared Dove, House Sparrow and the White Storks (with three young) were standing on their nest. Dozens of Common Swifts and House Martins whizzed overhead and before we knew it the cafe was almost empty!

After “café con leche y tostados” we returned to the hotel and loaded up the bus for our exciting tour of the Pyrenees and the Picos de Europa. Before we left Madrid we visited a wonderful country park on the outskirts of the city, called El Pardo. It took 20 minutes to get there and soon we were watching some exciting birds.

From the car park we spotted a pair of Rock Sparrows on a pylon and a few Black Kites in the air, we could hear Reed Warbler, Cetti’s Warbler and Common Nightingale, we got to see all three of them in due course. We made slow progress along a fast flowing stream because so many birds were flitting about. Unmanaged reedbeds and dense riparian woodland covered the area below us and so we had very little open water to look at. 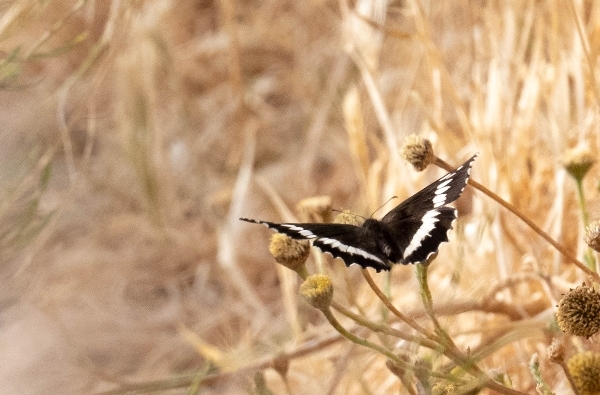 a Great Banded Grayling in flight - taken by Richard Pettett

We soon added Blue and Great Tits, Robin, Goldfinch, Chaffinch, Magpie and Barn Swallow to our day list before the goodies started turning up. We saw Iberian Magpie across the stream in a distant field, Penduline Tit in the reedbeds below us. Both Lorna and Linda were finding may birds and the Penduline Tit was one of them, we went on to see at least three juvenile birds. 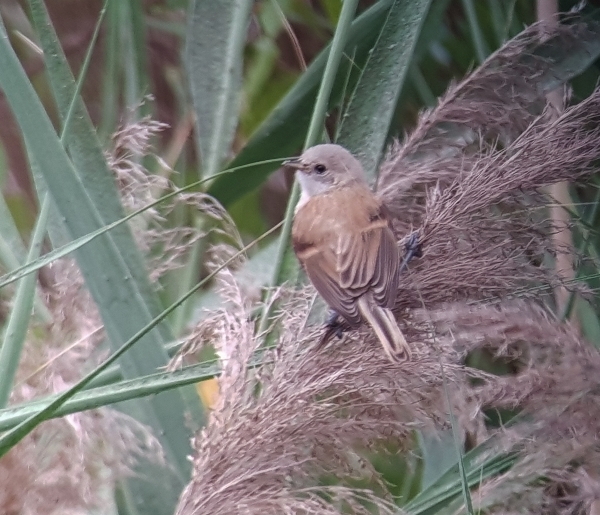 Around 9:30am it started to warm up and raptors began to appear, First  a host of Griffon Vultures, then more Black Kites, a Black Vulture joined the Griffons and an adult Spanish Imperial Eagle appeared above a distant ridge. Unfortunately, only a couple of us were able to get onto it before it disappeared and never returned. A couple of falcons joined the raptors list when Common Kestrel and Peregrine Falcon appeared followed by the addition of Booted Eagle, Common Buzzard and Red Kite to the raptor list. 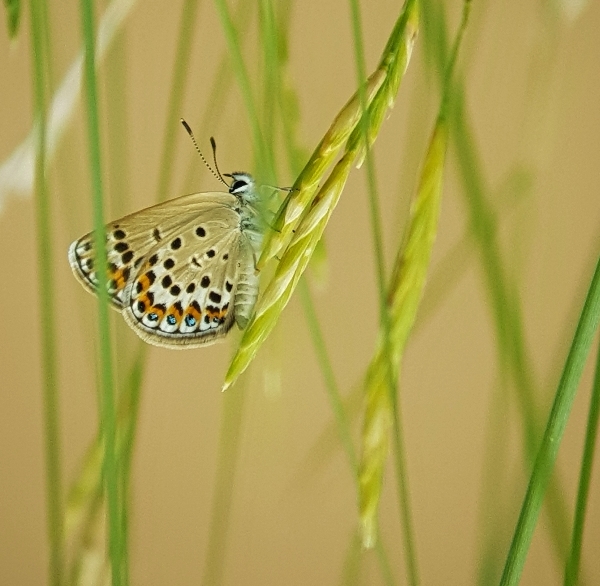 Back down to earth we saw Serin, Tree Sparrow, we had good views of Firecrest, short glimpses of Blackcap and more Rock Sparrows appeared. Before we left we added Great Spotted Woodpecker, a couple of fly-over Ruddy Shelduck (origin unknown?), Grey Heron, we heard Moorhen but had no sign of Little Bittern or Purple Swamphen.

We then drove into Madrid to visit a supermarket before setting off for the plains near Zaragoza. After a couple of hours driving we stopped at a motorway café for toilets and coffee. There we watched many Griffon Vultures, Booted Eagle and Black Kite, also Greenfinch, Chaffinch and Serin. 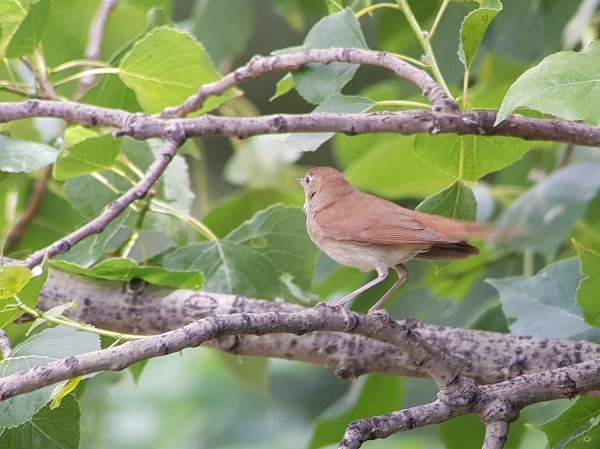 For another hour we drove north-eastward, dark clouds loomed, we could see bouts of rain ahead and both thunder and lightning.

As soon as we left the motorway heading towards Belchite we stopped in some cultivated fields to look for Turtle Doves. We spent five minutes looking before we found the first of several Turtle Doves, we also added a few species to the list. Mistle Thrush was unexpected in this habitat, many Wood Pigeons and Black Kites sat on wires, they must have been aware of the danger of flying around with so much lightning going on. 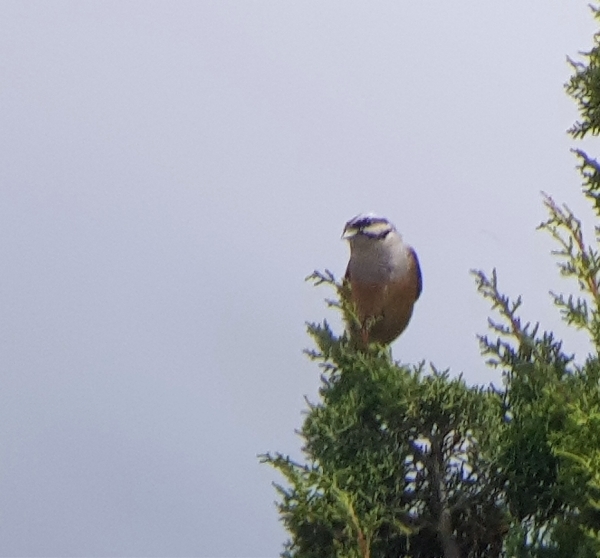 a Rock Bunting - was a nice surprise find by Linda

We watched Greenfinches, Chaffinches, Serins, Corn Buntings, Spotless Starlings, a couple of Hoopes and pair of Short-toed Larks. Not far along the road we made a second stop where found our first European Bee-eaters.

The next stop was in a village, we parked near a bridge over the Rio Huerva, a Black Redstart flew up from the track just as we got there. Dozens of Common Swifts, Swallows and House Martins were dashing about, we saw both White and Grey Wagtails on the rocks in the river and we heard Common Nightingale. 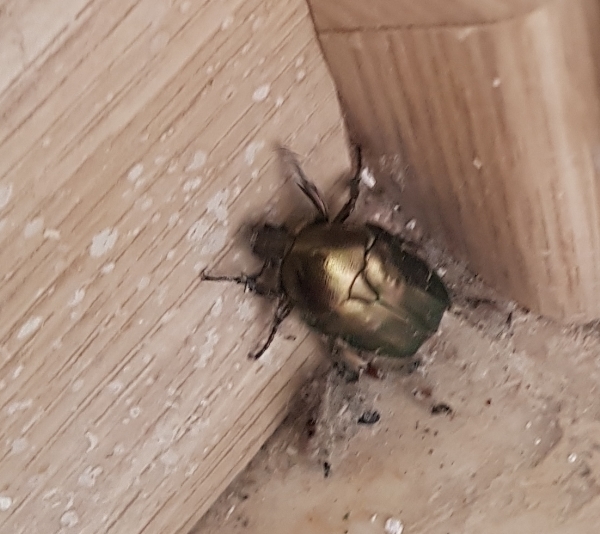 a Chafer Beetle found in my room

A little walk produced more butterfly sightings than new birds but we did hear a Wryneck, a Spotted Flycatcher performed well, we had great views of Serins and Common Nightingale and a few Griffon Vultures drifted over. The thunder and lightening continued during our next two stops where we added Western Black-eared Wheatear (a stunning male), we also found Stonechat, Rock Bunting (a nice surprise), more Bee-eaters and lots of Crested Larks.

Along one section of the road we found Calandra Larks, we got fairly close to them in the bus before they flew off. It was 5:30pm when we arrived at hotel near Belchite. We were all hot and needed a cooling shower before a cold beer and dinner. We sat outside to eat, Golden Orioles called to us s we sat down and enjoyed the warm, but breezy evening.