WEATHER: the heat is on! Another scorcher with an average temperature of 36C! Not much of a breeze.

We tried to beat the heat by taking a very early breakfast at 6am. This allowed us to be on the road at 6:30am heading down the valley to the Rio Aragon at Puente la Reina de Jaca, from there we took the road to Arrés and parked near a stream to start our birding. More bird song could be heard at this time of the day, but nothing new for the trip except the sighting of a female Cirl Bunting carrying food.

Our main birding stop was about a kilometer further along the lane we spent a good hour there enjoying some decent birding. We found our first Melodious Warbler and quickly followed that with our first Tawny Pipit, both were in song at some point. Stonechats, Cirl Buntings and Corn Bunting could also be heard and a Common Quail called loudly from the wheat field across the road from us. 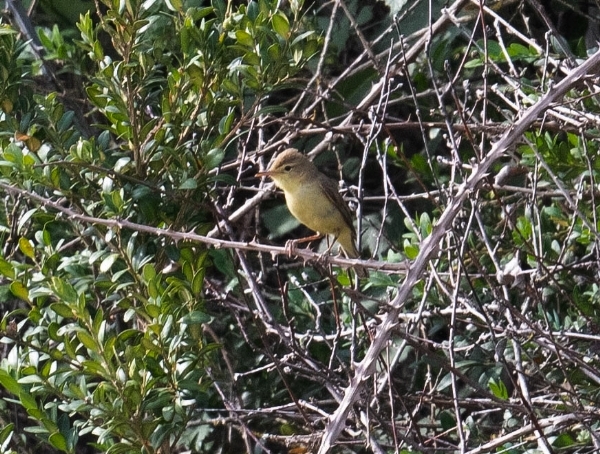 a distant shot, heavily cropped, of a Melodious Wabler, taken by Richard

Over the next hour we added Golden Oriole (heard) Turtle Dove, Black and Red Kites, Grey Heron, Serin and many common species. More stops along the lane produced our first Booted Eagle, this bird was perched on a large bush and constantly mobbed by Hoopoe, Magpie, Corn Bunting and House Sparrows, it eventually flew off. 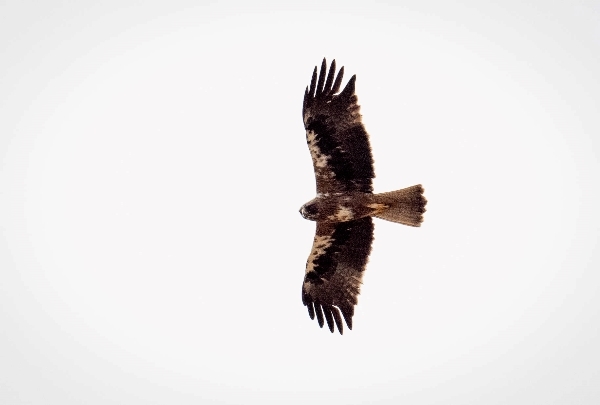 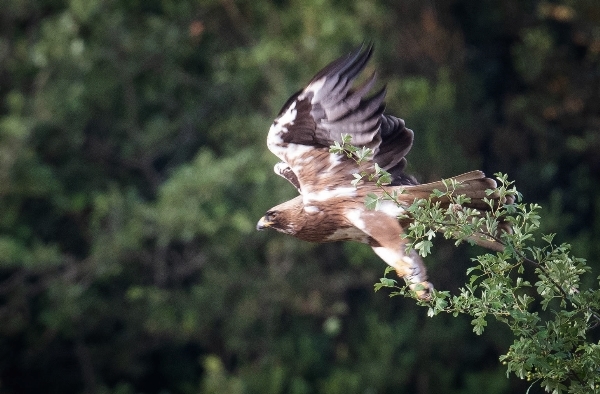 We searched for Orphean & Sardinian Warblers at two other sites, we had much better views of both Cirl Bunting and Melodious Warbler as well as more Turtle Dove sightings. 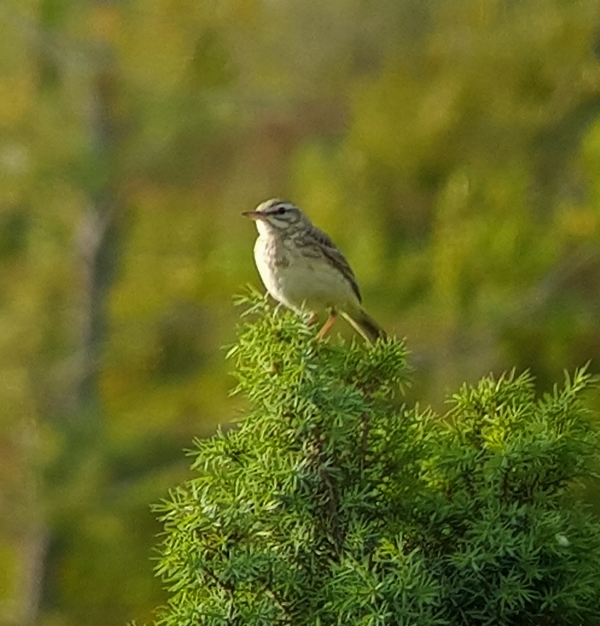 We returned to our main stop-off point and spent some time watching for raptors along the ridge above us. We did get distracted by the profusion of butterflies in the area, about 15 species were dashing about, we added Ilex and Blue-spot Hairstreaks to our list and we found several other new fritillaries. 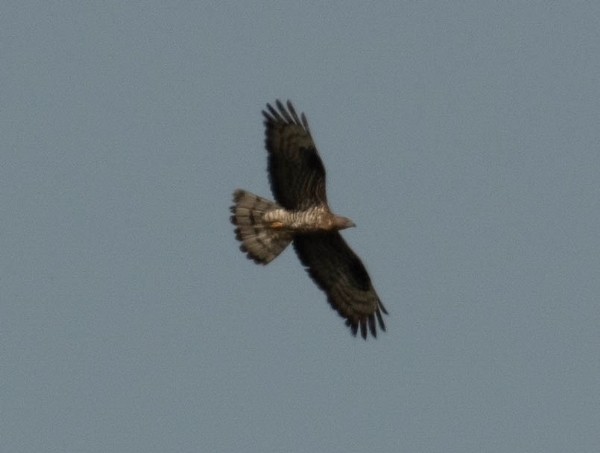 record shot of the Honey Buzzard, a very distant shot taken by Richard

I love this shot of a Black Kite eyeing up a Corn Bunting, Lunch I hope! taken by Richard 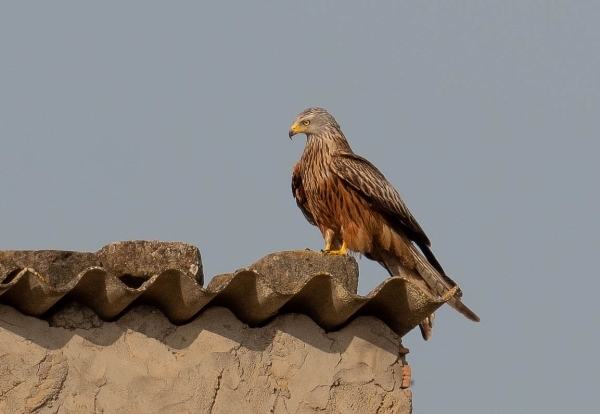 the magnificent Red Kite, a great shot by Richard

Short-toed Eagle, even more Black & Red Kites showed, as well as Griffon & Egyptian Vultures before our main target species arrived, the Honey Buzzard. One individual gave us a nice show and one is all you need! My group were now getting hot but they were happy as Larry with the buzzard sighting. 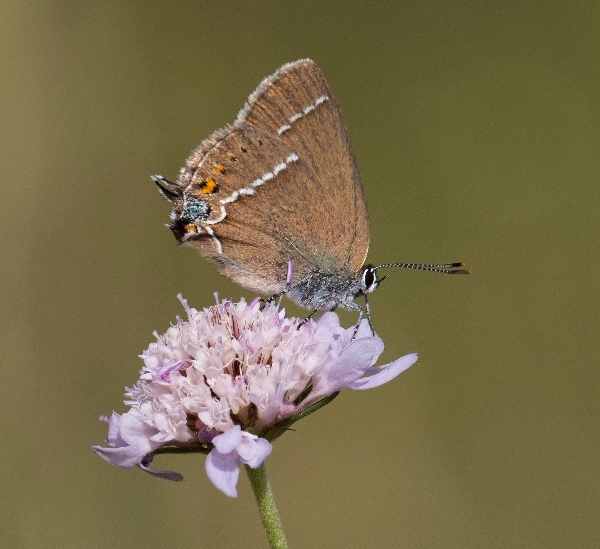 We drove up the Monesterio by following a long and winding road, forever climbing until we reached the open plateau at the top of a huge area of conglomerate rock formation. We parked in the wooded area and walked directly to the monesterio to take a coffee and cake break. 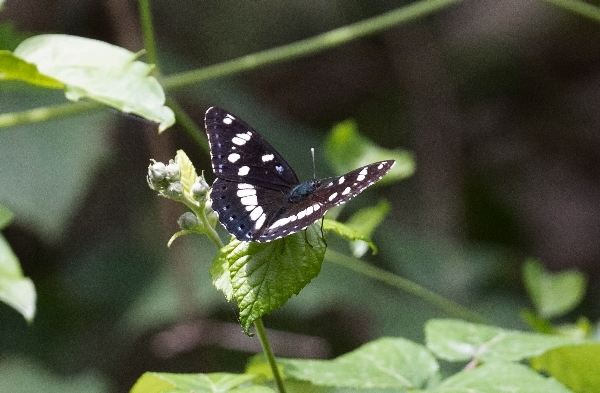 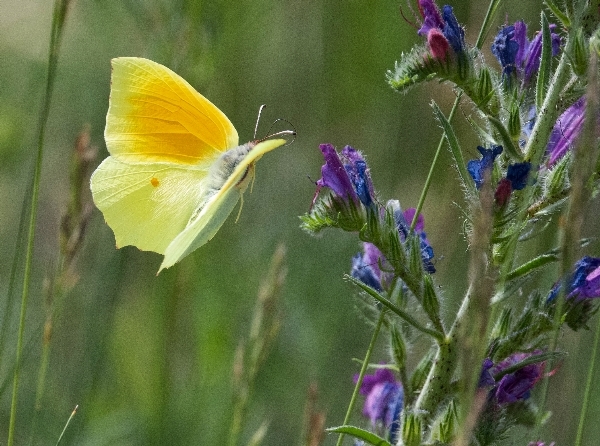 you very rarely see the orange patch in aphotograph beause the Cleopatra always clses its wings when settled, Richard captured this one nicely, I love these photos! 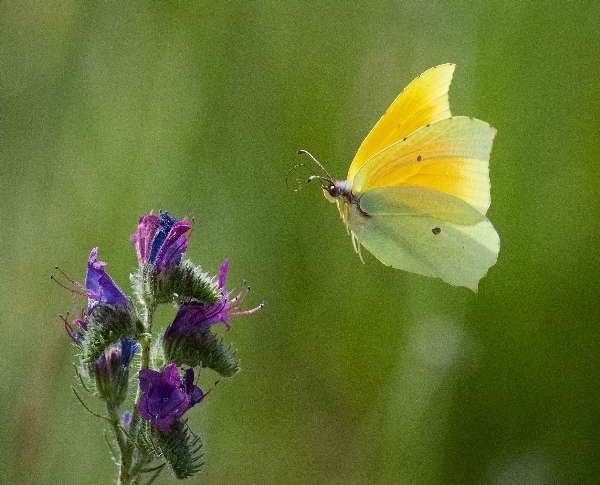 After our break we walked to the mirador (look-out) viewing point where we had spectacular views of the countryside and the Pyrenees Mountains. The visibility was quite poor but we did see the snow-capped peaks. Along the way we saw Crested Tit, Blue Tit and heard Firecrest and Blackcap and not much else. Again it was the wonderful array of butterflies and other insects that kept us entertained. 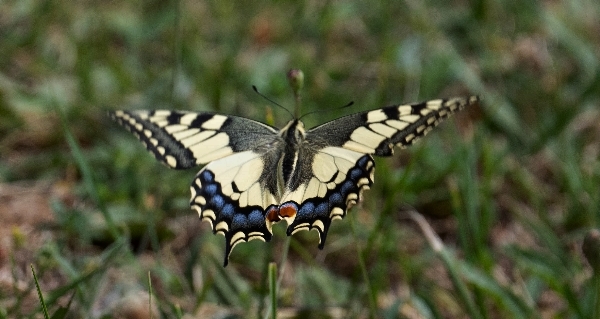 Common Swallowtail, by Richard. You can tell that we hardly saw any birds at the monesterio, just butterflies

Our circular walk took an hour, it was very hot but the shade of the forest helped. We added Jay, Eurasian Nuthatch and more common species but we never had a sighting of Black Woodpecker that we had hoped for. The butterflies were prolific, we saw Southern White Admiral, Common Swallowtail, Cleaopatra, Brimstone, Great Banded Graying, lots of browns, blues and white butterflies, that kept us busy. We also watched Hummingbird Hawk Moths, Bee-Flies and other flying oddities.

Back at the monesterio we ate our picnic lunch sitting at a picnic table under the shelter of the trees and ate ice-cream bought from the cafe, the temperature was once again up the higher 30’s. 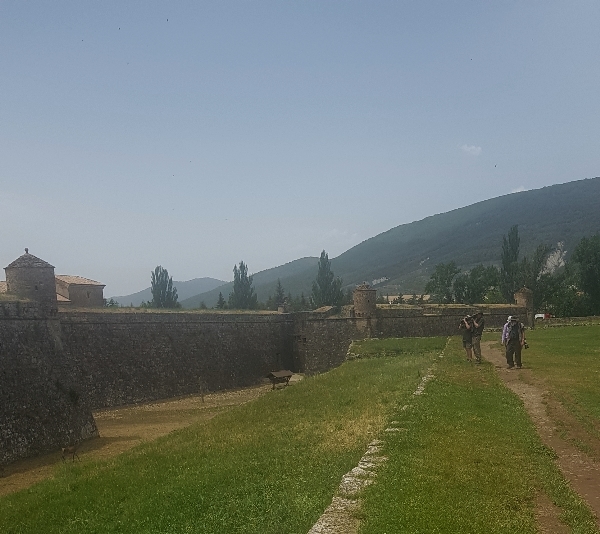 walking around the moat of the Citadel, you can just see a Red Deer in the dry moat area

For our afternoon session we drove down to Jaca on a small road, it was 17 kilometers of tight bends and pot-holes but at least the air-conditioning in the bus was working well. We parked not far from the 16th Century Citadel in the centre of town and walked across the open lawns to view the moat area and the old walls of this ancient monument. It is a well known site for watching both Tree & Rock Sparrows. 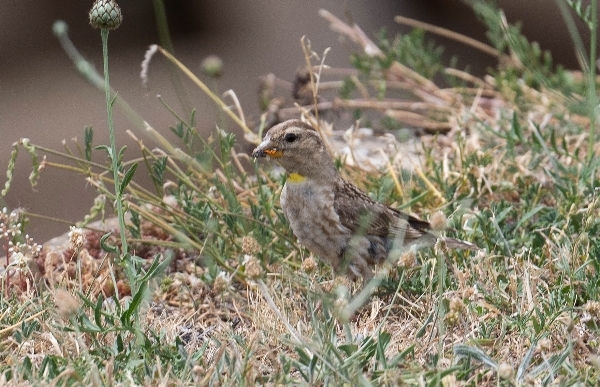 We had excellent views of both species and saw the herd of Red Deer in the moat area which was being sprayed with fountains of water from sprinklers. The deer stood around the sprinklers to keep cool. As we walked back we heard a Scop’s Owl call from the trees and then a second bird replied, we walked over and realised that the calls were coming from a couple of trees that were heavily clad in ivy and we had no chance of seeing the birds.

For our last birding of the afternoon we, once again, visited the Rio Gas just a few kilometers north of Jaca. We still had some snacks to eat so we used the shaded picnic tables. Richard and Linda sat on the bank of the river and watched a procession of birds coming to the river to drink, they already had an impressive list when we went to join them. Serins, Chaffinch, Goldfinch, Greenfinch, House Sparrow, Corn Bunting, Spotted Flycatcher, Blackbird and White Wagtail were listed.

Our return to the hotel was planned to be a little earlier than usual because we had requested an early dinner due to our later plans of going out again at 8pm to look for an Eagle Owl.  All went to plan, we arrived at the site around 9:15pm and waited around for an hour. During our wait we saw a few species but not many, Red Kite, a Honey Buzzard, Griffon Vulture, some House Martins and we heard Cirl Bunting, Blackcap, Garden Warbler and Song Thrush.

Before it got too dark we saw the first of several European Nightjars, this first one flew right over the top of us, it was light enough to see the small white, wing patches. It called a few times too, a female. Later we heard one or two males churring and we had a few more sightings of both sexes. So, we were successful with the Nightjars but the Eagle Owl did not appear or make a single hoot.

We departed at 10:30pm and got back to the hotel 30 minutes later, it had been a long day indeed. Tomorrow we had requested another early breakfast at 6am, good night!!