WEATHER; cloudy with some sunshine later, very windy. Temp 2-5C in the morning and 26C in the afternoon.

Our big day in the Picos de Europa had arrived, we took an early breakfast so that we could be up at the Cable Car in good time before it started running at 9am. All went to plan except for the system had changed, you could now book your tickets online, so there was no need to get there early and wait in line to buy tickets. Doh!! We still managed to get on the first car as not many people turned up anyway. 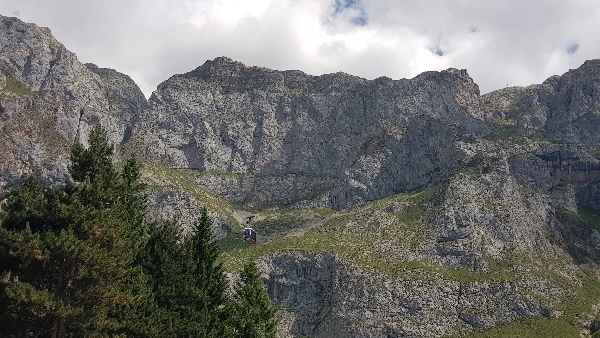 During our hour-long wait before our cable car trip we found some birds in the pine trees around the cable car station, our first sighting of Goldcrest was nice, a family party was making a lot of noise high up in the trees. We also saw Coal Tit, Black Redstart, Jay and Chaffinches. High up in the sky we noticed several Griffon Vultures and a couple of Common Buzzard, we noticed that the clouds were whizzing past, not a good sign!. 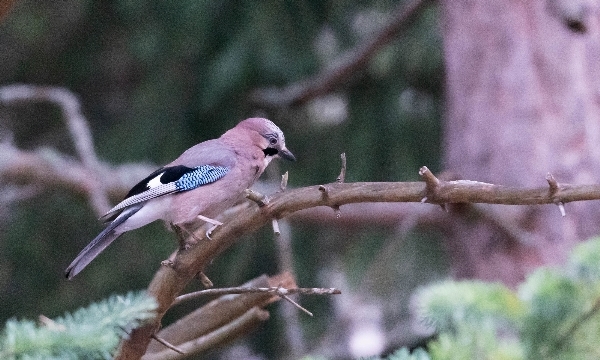 Jay in the car park by Richard

As we emerged from the cable car station at the top of the mountains we felt a distinct drop in temperature and as feared it was very windy, a cold biting wind that took your breath away. So we battled our way out onto the track and began our walk, a few notes of bird song could be heard, now and again but it was hard to keep your binoculars steady to look for anything. 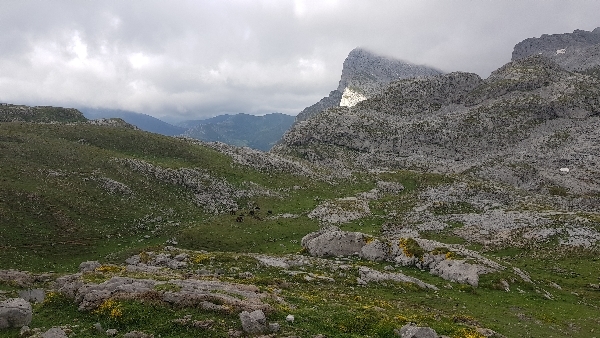 the scenery at the top is stunning

Richards picture of the group looking at a Wheatear

Richard saw the back end of a Northern Wheatear disappear over a ridge when we first started the walk and some 15 minutes later we found a couple of Linnets!! A Black Redstart was next and we heard Water Pipits but could not trace them. The only species readily available for viewing was the Alpine Chough, several of them dropped down to be fed. 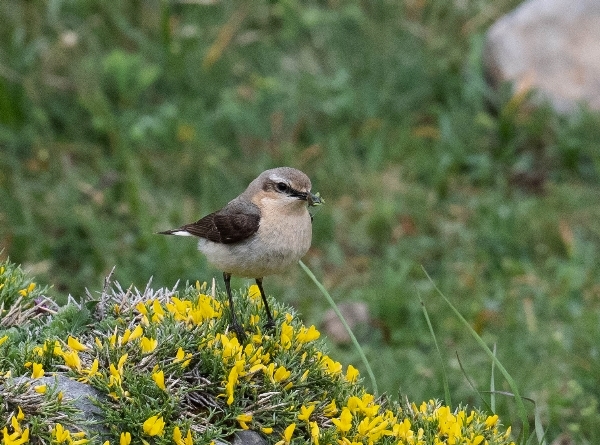 this Northern Wheatera and the Alpine Choughs were the only birds we saw close enough to photograph, taken by Richard

We eventually reached the base of the hugh cull where Wallcreeper and Snow Finch both breed, the wind was so strong and cold that you had to hide behind a rock to find any semblance of shelter. From there we did see a couple of Snow Finches flying low, battling the wind to reach their nests on the cliff face. There was no sign of Wallcreeper, or Alpine Accentor and we were frozen! 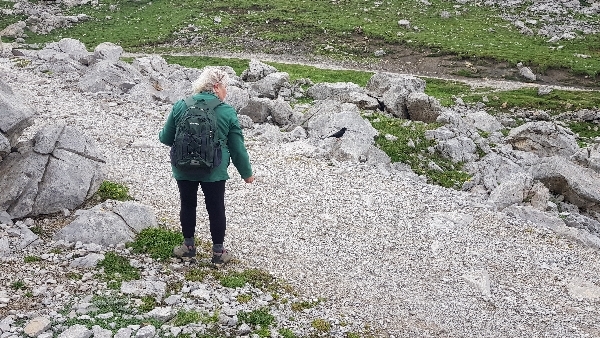 This is Linda throwing crumbs for Alpine Choughs

Back at the station we had a hot chocolate drink and a piece of cake bought by Linda, we warmed a little but none of us wanted to go out again and battle the elements to look for an Alpine Accentor. It was 12:30pm when we arrived back down at base camp, we drove a short way up the road near a forest trails and ate our picnic lunch. Periods of sunshine warmed us up, it was 20C and rising, what a contrast to the icy conditions at the top. 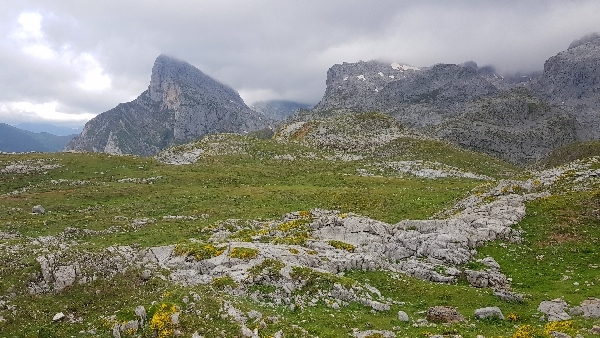 A short walk in the woodland produced a Bullfinch sighting, but nothing else, we looked for Middle Spotted Woodpecker, Marsh Tit and Common Redstart without luck, we did find lots of common woodland species.

Our visit to Pembes village in the hills further down the valley was very pleasant, it was warm and sunny and lots of birds were flying around the village. Black redstarts seemed to be everywhere, Barn Swallows, House and Crag Martins joined hordes of Common Swifts in the sky above us, we also saw Egyptian Vulture and Common Buzzards. 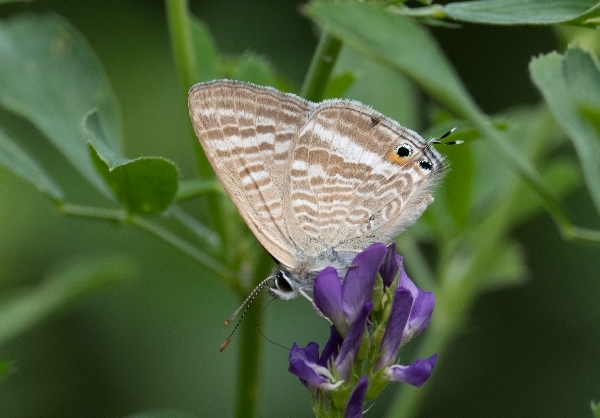 the afternoon sunshine brought out a few butterflies, this is Long-tailed Blue taken by Richard

Our walk up through this ancient village (many buildings have now been renovated) produced nothing new and a track into the farmland and up to a woodland produced even less. There wasn’t any bird song except for Blackcaps and no sign of Common Redstart or Middle Spotted Woodpecker. 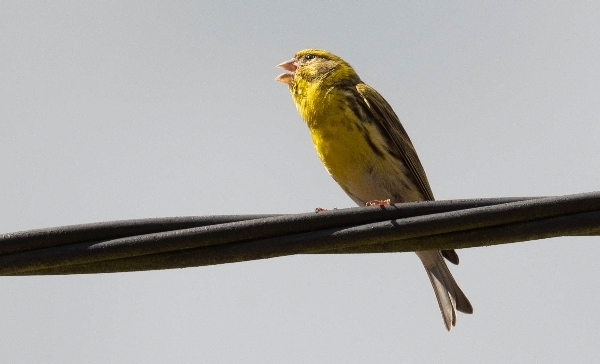 On the return walk we did see our first Peregrine Falcon of the trip as one swooped down after an afternoon snack. Before we got onto the bus we took another track where we found many Serins and Goldfinches feeding in the grass fields, more Black Redstarts and we found a Red-backed Shrike.

Back at the bus we drove down the lane out of the village and stopped a couple of times but found nothing new. We arrived back at the hotel around 5pm after a very disappointing day. Birding around the hotel and the river Deva across the road produced the usual Dipper, Grey Wagtail and common species. The Spotted Flycatcher could be seen around the back of the hotel in its usual place. 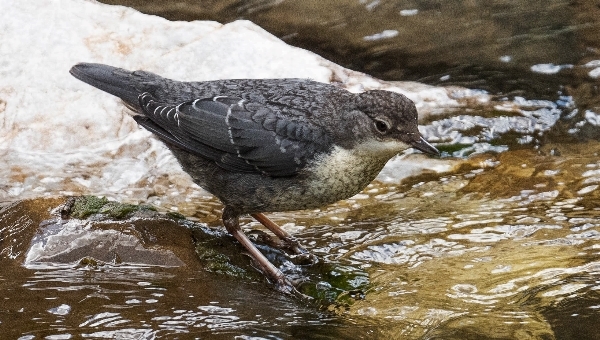 a young Dipper taken by Richard just outside our hotel

It is a long drive all the way to the Picos de Europa and putting our eggs all in one basket finally proved to be a big mistake! Giving ourselves just one shot at the altitude species seems foolish. Having said that, this is the first time that the weather has stopped us seeing all the goodies of the Picos. This year has had weather extremes, high temperatures and many species have failed to breed or have bred early, all conditions not under our control, “you pay your money and take your chance”!