We had an excellent start to the day as we walked along the main track towards Shapwick Heath from the car park at Ham Wall. It was 8:15 as we set out and just beyond the car park at the Shapwick Heath track we started listing some good sightings. An encounter with a male Bullfinch is always an exciting experience but today was extra species as we saw two males and a female, this was quickly followed by a Goldcrest sighting as this tiny bird flitted trough the same bush as the Bullfinches.

Suddenly a flock of small finches dropped into the top of an Alder tree close by, we scoped them and found both Siskin and Redpolls. More birds arrived, we got onto some Chaffinches and to our great surprise we found a few Brambling with them. Wow! A few great sightings in less than 5 minutes and we hadn’t even started the walk to Noah’s Lake on Shapwick Heath. 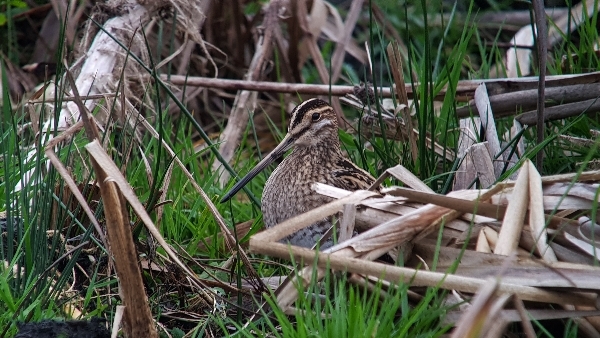 The finch flock soon left us so we moved on noting Robin, Wren, Dunnock and we Heard a Cetti’s Warbler up ahead. The large pool at Meare Heath was covered in ducks, you could hear a cacophony of bird calls coming from the mass of Wigeon, Teal, Shoveler, Gadwall, Coot and Mallards. A Marsh Harrier drifted over the reeds at the back of the pool whilst a Great Egret and two Grey Herons stood at the edge of the water waiting for breakfast to appear. Two Ravens flew over us calling and the sky always had Starlings, Cormorants, Crows, Jackdaws, Rooks, Black-headed Gulls or Lapwings dashing across it.

Along the woodland track leading down to the hide at Noah’s Lake we saw Goldfinches, Long-tailed, Blue and Great Tits and on the lake we had a similar scenario as the Meare Heath Lake, it was absolutely covered in birds. From the hide (we had trouble getting into the hide because at first yours truly didn’t push hard enough and declared it was locked – dipstick!) Richard barged it open and we enjoyed a good half an hour sifting through the mass of birds out on the water. 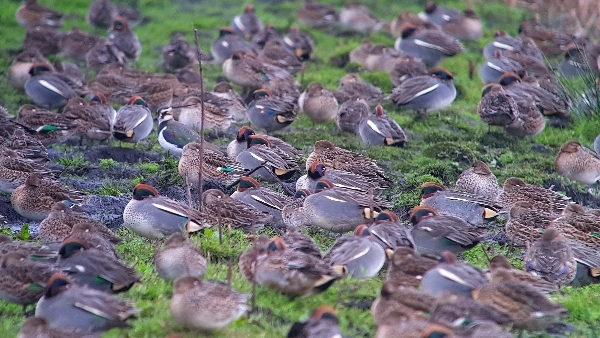 a 'spring' of Teal with a single Lapwing in the middle

We quickly found our first target bird, Whooper Swan, two of them were feeding on the opposite side of the lake and our second target was the Pintail Duck. They stood out from the crowd of Wigeon with their smart chocolate brown and white uniforms. We couldn’t see anything else new for our list but it was an enjoyable visit.

Walking back along the woodland track we found another flock of finches, at one point I had Goldfinch, Siskin and Redpoll in my field of view. Plenty of all of those three species kept us entertained for a while before we departed. We attempted to see a calling Cetti’s Warbler without success and another Goldcrest showed up in the bushes. Walking back to the car park via the boardwalk trail produced one Chiffchaff sighting! 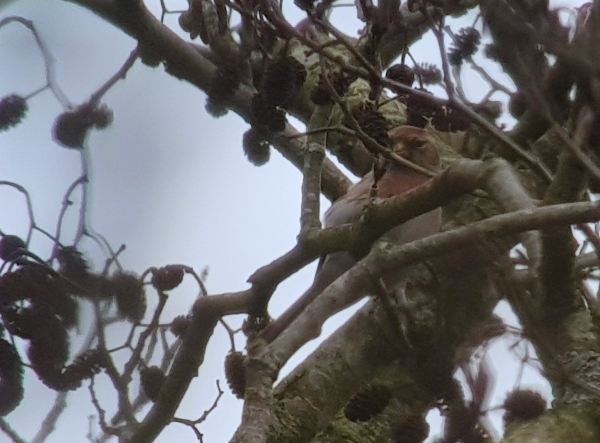 a record shot of a Lesser Redpoll

From Ham Wall we drove to RSPB Greylake reserve where we spent an hour or so sitting in the main hide sifting through the ducks and Lapwings. But before we walked to the hide we scanned the open meadows across the main road looking for Merlin or Cranes or both. We found a few Fieldfares, lots of Starlings and a single Buzzard, there was also one or two distant Great Egrets and plenty of Mute Swans. 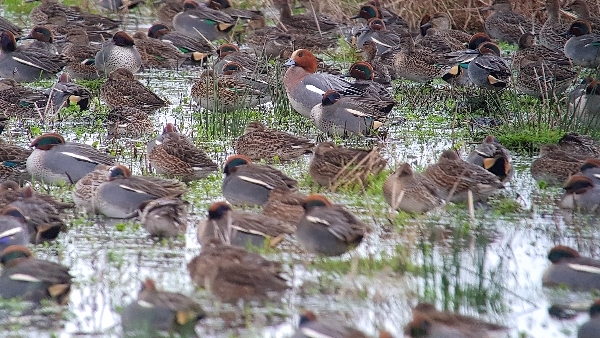 another 'spring' of Teal with a single Wigeon

A single, solitary Golden Plover flew over us as we walked towards the hide and the Lapwings gave us a splendid aerial display swirling this way and that, there must have been at least a 1000 up there.

From the hide we had thousands of Teal and Wigeon to sift through with a few Snipe thrown in and Mike Taylor found a couple of Water Rail for us.  A rare Baikal Teal ad been seen yesterday, but no-one could find it today, it could have been anywhere on the huge expanse of marshland. Apart from the odd Marsh Harrier drifting by, putting up all the Lapwings we had little to write home about except for the shear numbers of ducks, there was thousands of them. 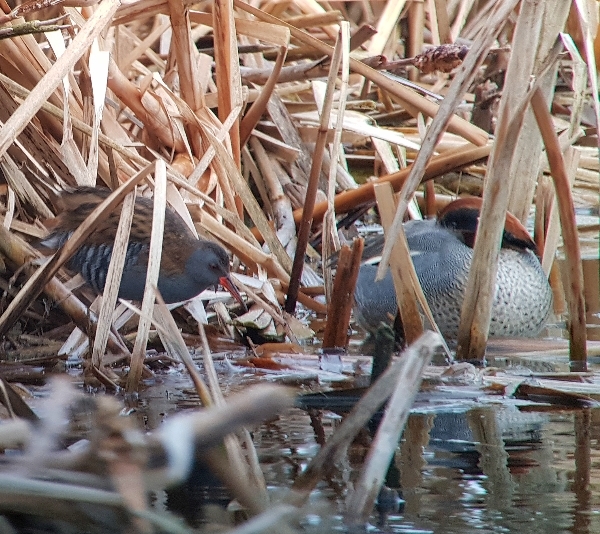 a Water Rail at Greylake with a sleeping Teal

A quick stop at Burrow Mump after leaving Greylake produced nothing except for more Fieldfares and some distant Canada Geese and a very pale-coloured Buzzard. We then drove round to Staithe to view the water meadows from the high banks of the River Parrett, we eventually found a flock of Common Cranes. They were very distant feeding along the edge of a maize field, we counted 31 birds but we knew there was a quite a few more. 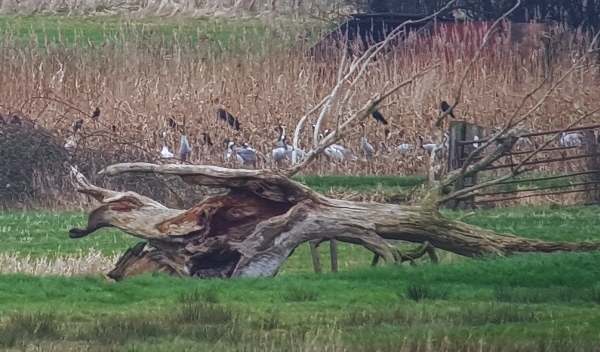 From there we drove into Langport to buy our picnic lunch, from the main car park in Langport we added Greenfinch to our trip list, a few of them were found in a tree with Chaffinches and Goldfinches.

We then drove to RSPB Swell Woods where we sat in the bus watching the busy activity around the bird feeders wilst eating our lunch. In actual fact the feeders were empty, but people had been throwing down seed and we helped by chucking out many crumbs and scraps. We soon found Blue, Great & Coal Tits, along with Robin, Dunnock and Chaffinch. Then the star bird arrived, the Marsh Tit, our most wanted and targeted bird, shazam!! 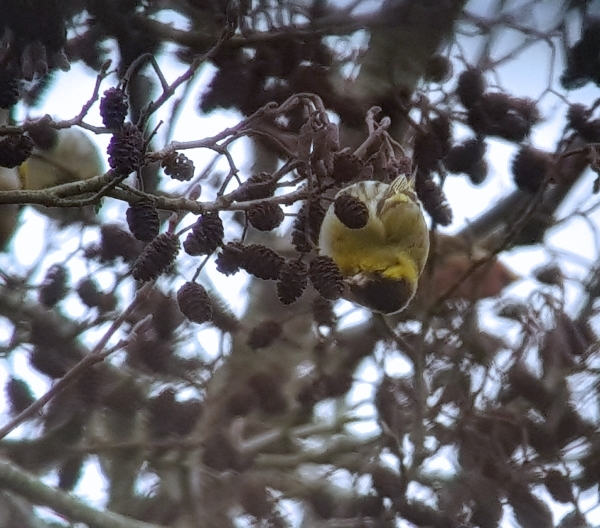 a Siskin from our visit to Noah's Lake

We heard a Nuthatch calling in the woods and so decided to take the lovely circular walk around the woods. A Great Spotted Woodpecker also called before we stopped to watch a couple of Treecreepers, further round the track we stopped to admire the fantastic view from a lookout point before moving along and finding our first Jay of the trip. This bird attracted our attention by calling, it used its seldom heard ‘buzzard-like’ call which totally threw us at first.

The woodland was very quiet as you might expect in the middle of winter but we did see Goldcrest, Goldfinches and Chaffinches and back at the car park we finally got sight of the Nuthatch.

For the last part of the day we decided to stake-out an area where the Common Cranes come in to roost, so we drove the short distance to a very steep hill and parked up. Our view of the moors was stunning and panoramic, we waited about 45 minutes before Lorna spotted the Cranes in the distance. In the meantime we had fun scanning the moors below us, finding many species and huge numbers of Lapwing and a good sized flock of some 300-400 Golden Plover. 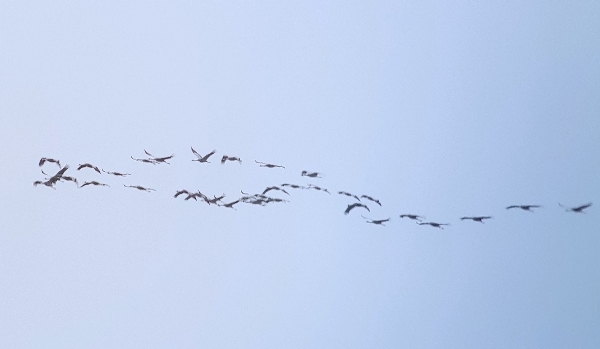 some of the Cranes as they flew in to roost

As the Cranes got nearer we could hear them and on counting the flock we found there was 72 of them!! Wow, we never expected that many. They got nearer and then dropped down onto the moors some distant away, what a lovely experience, I know you can seen roost of over 20,000 Cranes in France and Spain but for a bird on the brink of extinction in the UK, 72 is a good number and we’ll take it! 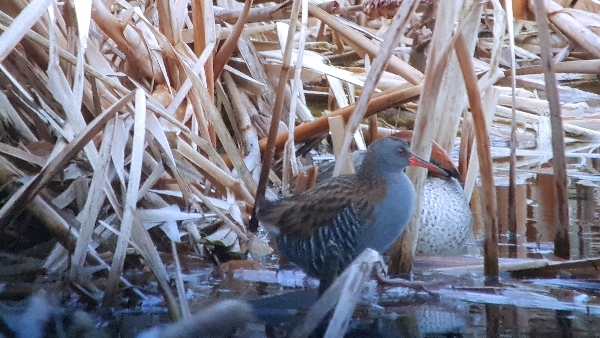 another picture of the Water Raill seen earlier

We drove back to the Farmhouse at 4pm and before we parked up to finish the day we drove just past the farm to check the adjacent fields for the elusive Glossy Ibis. We saw dozen of Cattle Egrets and Little Egrets but not the Ibis, we will try again tomorrow.