WEATHER: it was an atrocious start to the day, high winds, rain and very low temperatures. Much brighter later with sunshine and light winds. Temp 2-5C

What a cold start to the day! It was almost freezing out there, a strong wind with driven rain didn't make for good bird watching. We set off at 8am and headed for Cheddar Reservoir, but first we attempted to find the Glossy Ibis in the fields next to the farm. We found lots of Cattle and Little Egrets with Mute Swans but not the Ibis.

It took 30 minutes to drive across to the Cheddar Reservoir and just five minutes out of the bus was enough to freeze us all and drive us back into the bus! The wind was ridiculously strong you could hardly stand up let alone scan the very choppy water. We saw Black-headed Gull, Pied Wagtail, Cormorant and Coot!

Moving round to the Axebridge side of the reservoir we found a very sheltered spot, the rain had stopped and we had  reasonble weather conditions for a proper scan of the water which was still very choppy. We found lots Tufted Duck, Great Crested Grebes, Coots and plenty of Common Pochard but not the hoped for Red-crested Pochard, perhaps our target birds had flown back to Cotswols Country Park were they had come from?

The drive across to Chew Valley took us through the town of Cheddar and the famous Gorge, we saw very little along the way just the usual corvids in the fields and lots of Wood Pigeons. 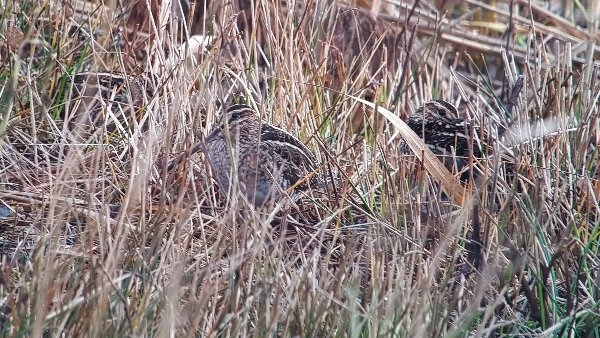 Our first port of calls at the Lake was the Stratford Hide where for the last few weeks a few Jack Snipe had been performing well. It was very windy at the hide, ther wind was blowing into our faces through the viewing openings, it was freezing in there. We found a few Common Snipe before we got onto a Jack Snipe, this bird quickly bobbed its way out of sight before all of the group got to see it.

A second bird was found, it too was bobbing but on closer inspection it turned out to be another Common Snipe ( I have seen Common Snipe mimic the bobbing action of Jack Snipe before now but the group had not). It was a big diappointment for them because after an hour of searching the Jack Snipe did not reappear, we left the hide and planned to return a little later in the day.

All of sudden the wind dropped, it was like someone had shut a door somewhere, wow, that was spooky, it happened so fast. We watched the feeders at the back of the hide for a while, noting: Blue, Great , Long-tailed & Coal Tits, Chaffinch, some of the group saw a Great Spotted Woodpecker our first of the trip.

At Herriot's Bridge we were once again disappointed because of the weather, we added Shelduck, Pintail, Wigeon, Common and Herring Gulls to our day list, but nothing elses could be seen. So we drove to the pastie shop in West Harptree to buy lunch before heading round to Heron's Green to eat.

In the bay at Heron's Green two Great Black-backed Gulls were tussling over a very large dead fish whilst the smaller Lesser Black-backed Gulls looked on. We found a pair of Goldeneye and saw lots of Tufted Ducks out by Nunnery Point where we were informed by a local birder that a couple of Greater Scaup had been seen a few minutes ago. So we drove round to the track to Nunnery Point, we got most of the way there but a second gate was padlocked shut, so we had to walk for a while. 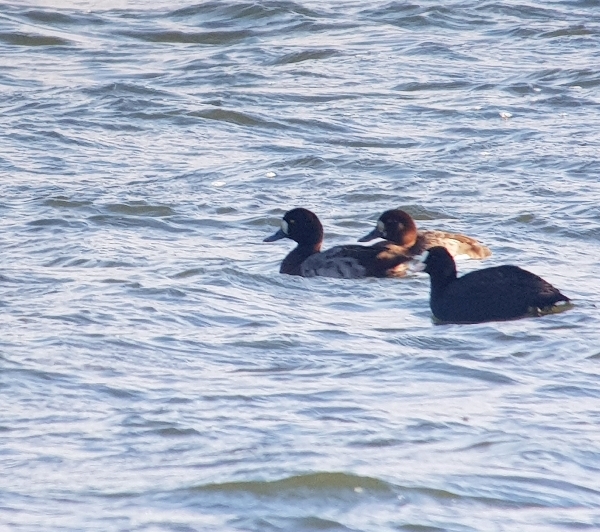 two of the female Greater Scaups seen at Nunnery Point

During our walk we saw Long-tailed Tits, Fieldfares, we heard a Green Woodpecker and we found a huge flock of Common Pochard in a small inlet. At the point we sifted through the Tufted Duck flock and found a 1st year male Greater Scaup and three female type birds, we also had closer views of the Goldeneye.

From Nunnery Point we drove across country to the 'Tanks' (3 small reservoirs) at Barrow Gurney where we knew a long staying Long-tailed Duck was present, over-wintering for its third year. It took about five minutes to locate the little beauty, what a stunning male bird it was, it quickly went onto the top of the list for our bird of the day! 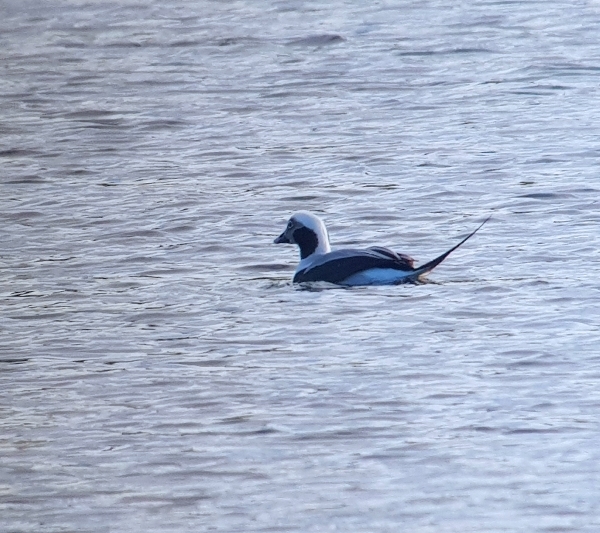 Back at Chew Valley we visited the Dam near Chew Stoke where we found the wintering Common Sandpiper and a couple more Goldeneye, our stay there was brief because we wanted to return to the Stratford Hide for a second attempt at seeing the Jack Snipe. 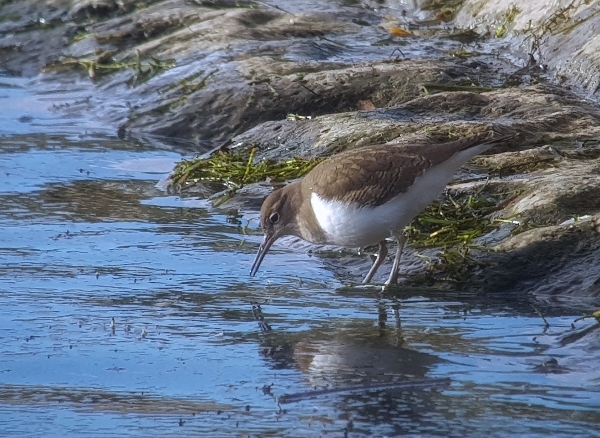 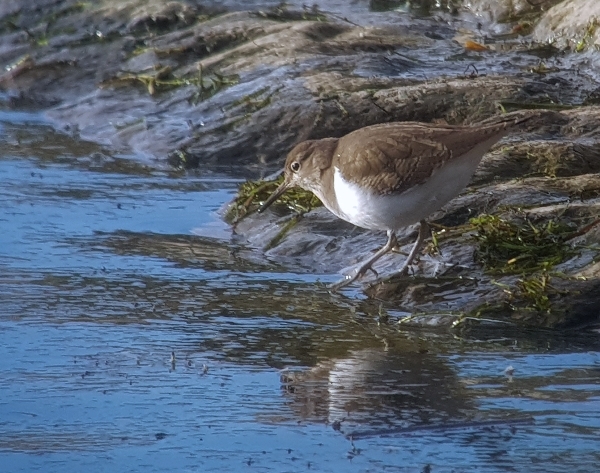 The weather conditions were now very good, the sky had cleared, we had sunshine a very light breeze although it stayed cold.  We quickly picked out up to 12 different Common Snipe from the hide and it was Linda who found a Jack Snipe. This one performed really well and over the next 30 minutes it showed several times and performed its bobbing action. Hooray, everyone got to see it well at last. 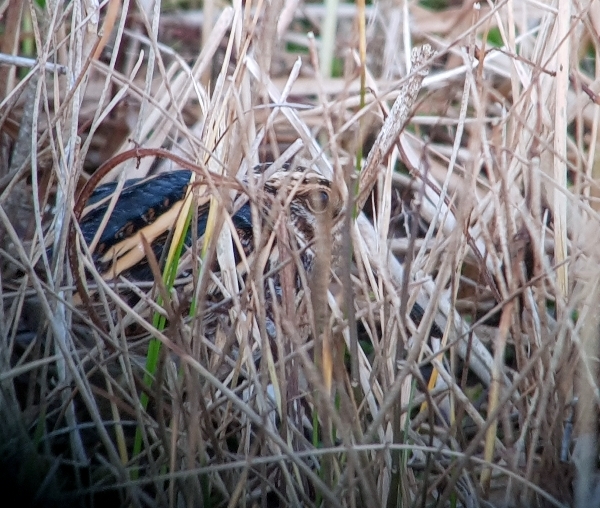 the big beady eye of the Jack Snipe

A Marsh Harrier flew low near the hide and various common duck species could be seen,  I saw a Nuthatch as we left the hide and usual birds were around the feeders, it was too breezy for Bearded Reedlings to show so we didn't look for them. 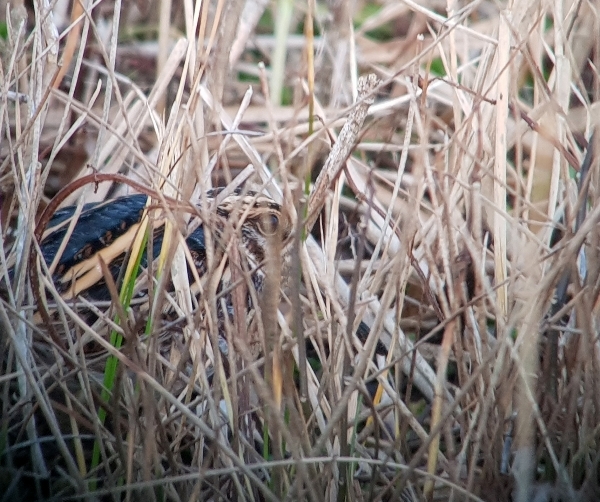 With the weather conditions so good we thought a second visit to the Starling Roost at Ham Wall would go down very well, we had a clear sky and virtually no wind, perfect. On the way back to the 'Levels' we saw plenty of Cattle Egrets, at least 150 sat in one field, we also picked out Common Buzzards, Fieldfares and lots of Wood Pigeons. 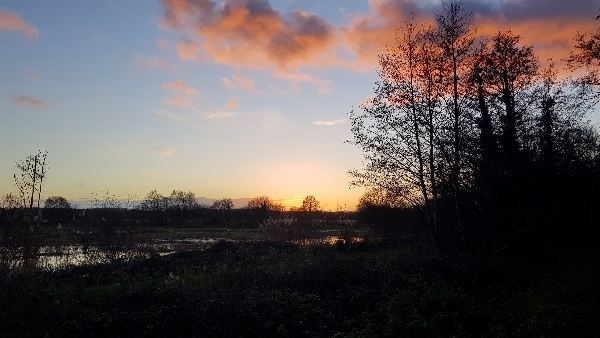 sunset at the Levels, what a contrast to the start of the day!!

At Ham Wall we joined the throngs of people on the main track and made it to Viewing Platform No. 1 by 4pm, it was still quite light so we ventured further along the track hoping for a Firecrest sighting. We saw Great Egrets, Grey Herons, Marsh Harrier and then the Starlings started to arrive.

Once again the murmuration did not occur, we were very disappointed, thousands of birds turned up but they simply dived down into the reedbeds and settled for the night. Two or three separte roost sites were chosen by the Starlings so the numbers at each site was quite low, tens of thousands instead of hundreds of thousands. I assumed it was because of the weather, it was too good and the conditions gave the starlings multiple choices of where to roost.

We left underwhelmed once again, but before we went to the fartmhouse we stopped near Burtle to listen for Tawny Owls, none called during our breif stop so we got back to our rooms by 17:30pm which gave us an hour before the bird log was called.

We have seen 85 species so far and hope find a few more tomorrow before we leave the Levels for our Dorset part of the Tour.