WEATHER -  a dry start, then it got windy and wet, very windy at the end of the day and very wet. Temp 5-8C

We knew it was coming, the bad weather that is, so we tried to make the most it before it got too windy and wet. At 8am we set off to view Weymouth Bay from the sea wall near Lodmoor RSPB reserve. We searched for a Red-necked Grebe that had been present for a couple of weeks now, it was cold standing there with a brisk breeze in our faces. We saw lots of Cormorants, Great Crested Grebes, a few Razorbills and the usual gulls but not the RN Grebe. 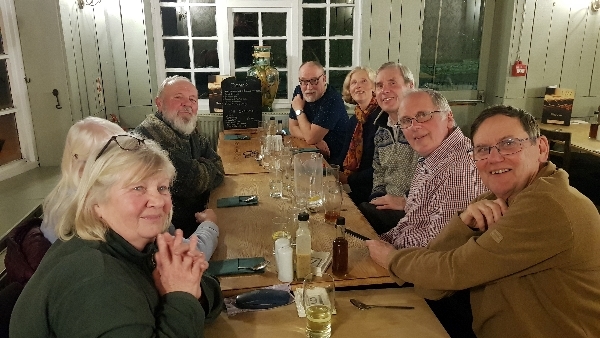 my motley crew at dinner

We then walked the west path at Lodmoor which was buzzing with finches, we saw a dozen or so of Greenfinches, a couple of Bullfinches, Chaffinches and Goldfinches, we also saw a very tame Robin, lots of Dunnocks and also Blue, Great and Long-tailed Tits. 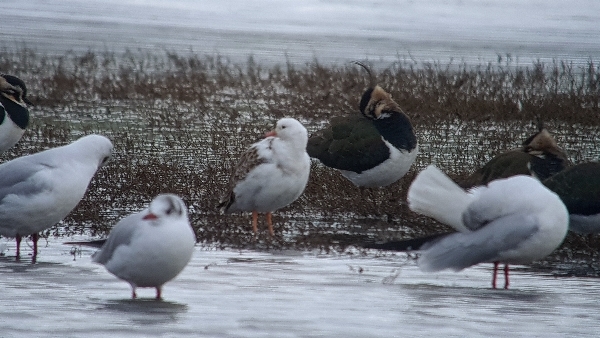 the 'white' Ruff at Lodmoor 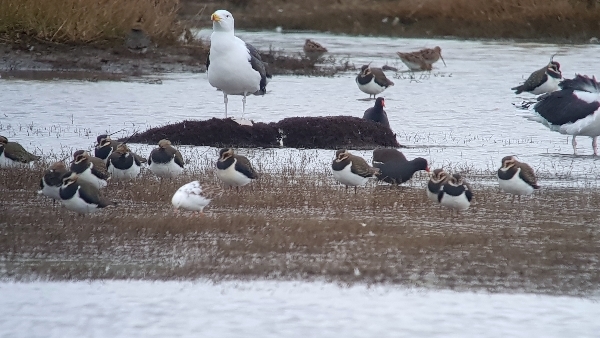 It was more sheltered as we got out of the bus at Weymouth Sailing Club where we scanned the northern side of Portland Harbour for grebes and divers. We soon found Red-breasted Mergansers, a single Black-necked Grebe and then a single Slavonian Grebe, that’s four grebe species in the bag, so far. 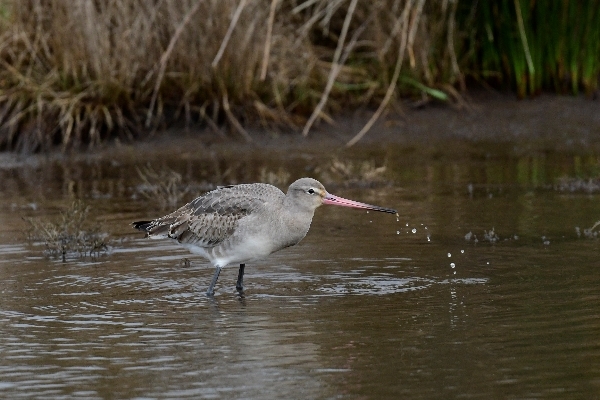 I picked out a Black-throated Diver but after showing briefly once more we lost sight of it, doh! A Rozorbill and a few Mediterranean Gulls was all we saw before we walked up to Sandsfoot Castle to view the harbour from there. From the castle grounds we added Great Northern Diver to the list, this one showed showed quite well although distant, a second Black-necked Grebe was also found before we moved on.

Next stop was Ferrybridge, it was high tide so all the roosting birds were very close to the visitor’s centre. We saw a couple of dozen Dark-bellied Brent Geese, dozens of Dunlin, a couple of Turnstones, Ringed Plover and five Bar-tailed Godwits. Four Oystercatchers flew and then three Pale-bellied Brent Geese arrived, they fed very close by, amongst a host of Mediterranean Gulls.

We drove up to Portland Castle after stopping at the supermarket to buy lunch. We found a sheltered spot and scanned the southern end of the harbour. All we saw was a few Red-breasted Mergansers, there was a host of Shags and a couple of Cormorants on the sea-defence wall, it was good to point out to the group the differences between the two. 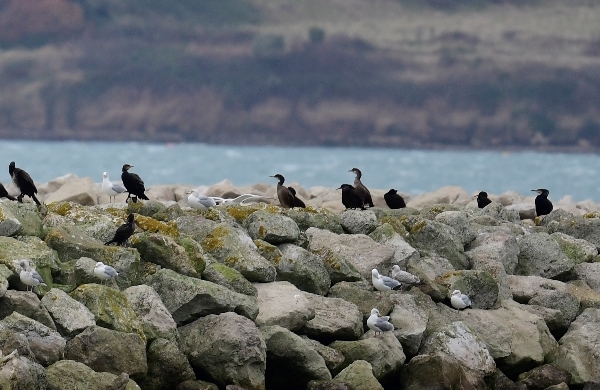 a single Cormorant (far right) with a bunch of Shags, taken by Richard from Portland Castle

A brief stop in Fortuneswell to view a very windy Chesil Cove looking for a Black Redstart was a bit of a waste of time. We did see a bedraggled Rock Pipit and a beautiful Red Fox! 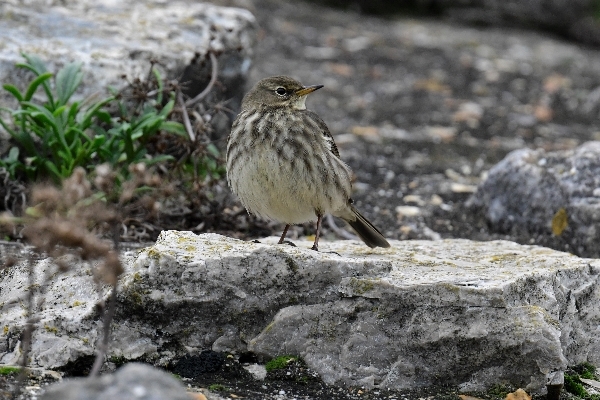 The windiest part of our day was the time we spent at Portland Bill, you could hardly stand up at times but we had a terrific hour-long sea-watching session huddled behind the wall of the Lighthouse garden. It was manic out at sea just off the Bill, dozens of Northern Gannets gathered just eastward off the Bill with just as many Kittiwakes, Herring Gulls with a few Great Black-backed Gulls. A constant stream of Auks flew past, heading both eastward and westward, we identified both Guillemots and Razorbills from Richard’s photographs, we also saw a couple of Fulmars, five Common Scoter and three Red-throated Divers all going west. I am sure others passed us by further out. 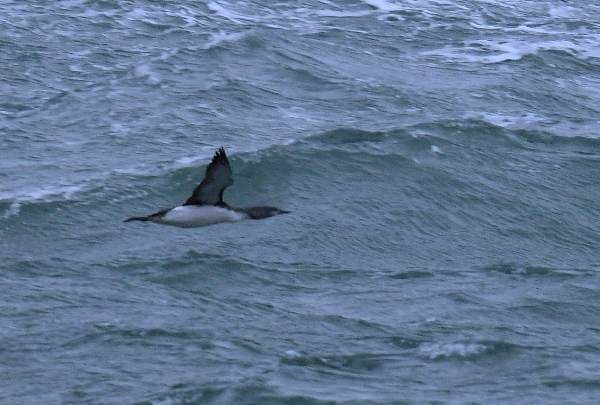 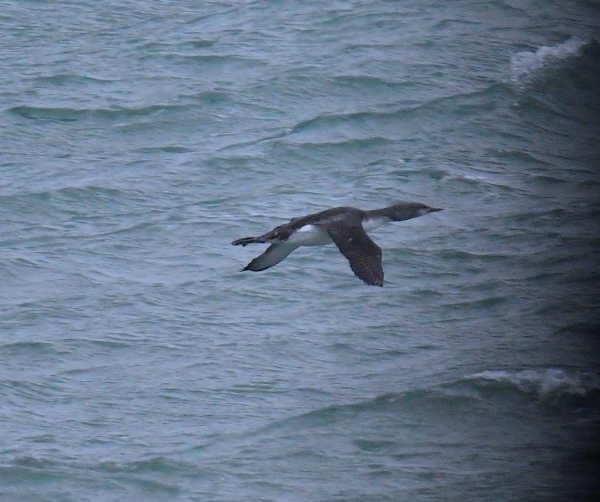 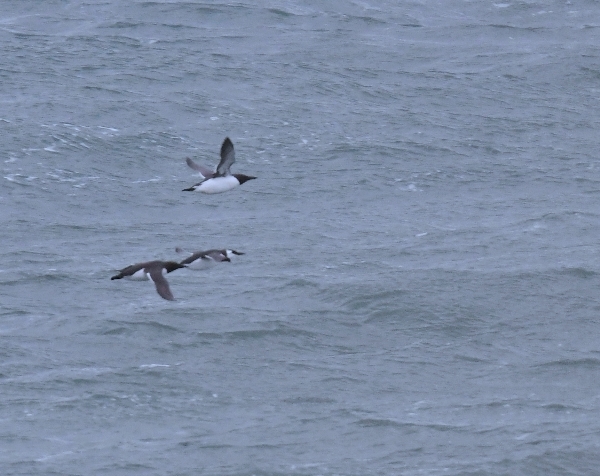 Guillemots, two of them in summer plumage, taken by Richard

We then sat in the bus and ate our picnic lunch it was 2pm!! After a brief stop at Chesil Cove for a second look for the Black Redstart we drove into Weymouth. We made a short stop at the sheltered harbour, it was like being in another world, no wind at all but it was raining lightly. We searched for a Iceland Gull, another elusive bird that could be anywhere at anytime, we failed to find it. 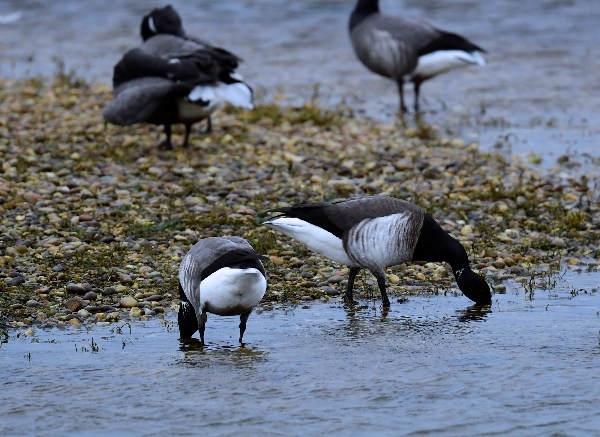 Lastly we spent the remaing part of the day at Radipole Lake, the wind had dropped a little but the rain had increased. I can’t believe that my group were still keen to get out of the bus and walk around near the visitor’s centre, which was closed at usual.

We sifted through the hundreds of gulls on the car park and in the main lagoon for the bird from Iceland without luck, we did see a good number of Common Gulls which was nice.

We decided to stay around for the Starling Roost, you can only see a few thousand birds here compared to the hundreds of thousands you see at Hall Wall in Somerset, but they usually give a nice Murmuration aerial display.

Despite the rain we had a terrific display, it was amazing, the group loved it, it lasted a good fifteen minutes, many shapes and patterns were displayed above us, truly amazing. Then all of a sudden the birds decided to drop down to roost not far from us, down they dropped into the reeds like swirling water flowing into a plug-hole, gone in a flash! What a superb ending to a great birding day in awful weather!!