Burrr!! It was cold and wet at times today but also very sunny and still, it was certainly a day of two halves.

We set off at 7:45am and drove to Stoborough Heath just south of Wareham arriving 40 minutes later. It was cloudy at first with very bad light and as we drove along a lane onto the heath we saw two Mistle Thrushes fly up as a dog and dog-walker came towards us. We pulled over at a likely spot where to look for Dartford Warblers, a place where dense gorse bushes were scattered about. It took a little searching but soon we found our target numero uno, a Dartford Warbler, it showed well intermittently and we all got to see it, Richard managed to get some good photos of it. 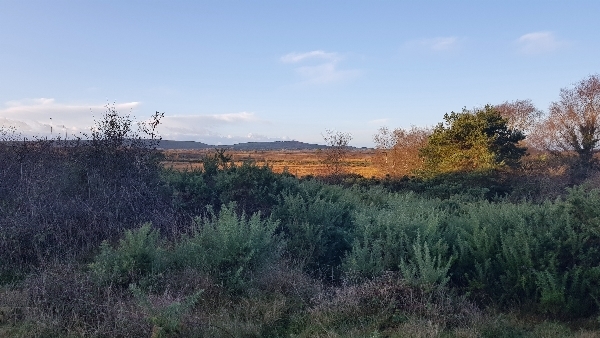 view across to Hartland Moor from Stoborough Heath 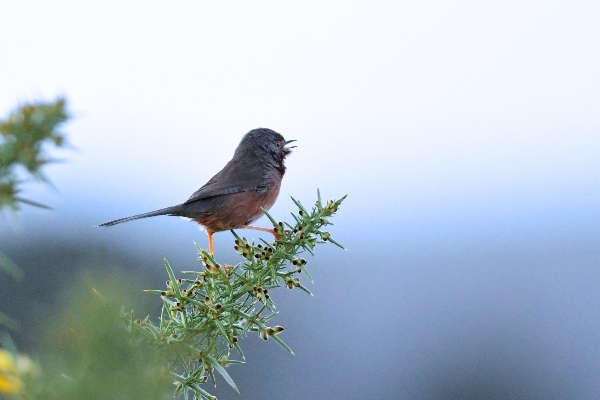 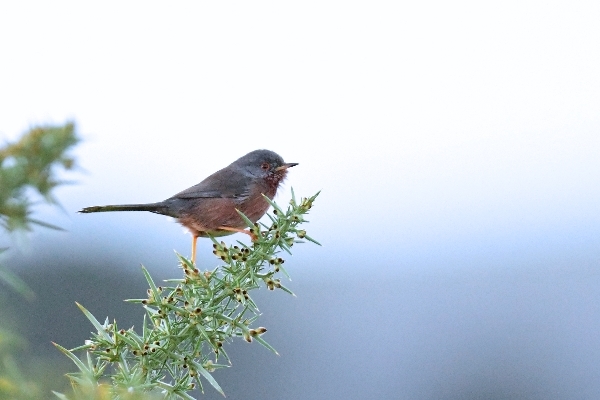 We then circumnavigated Hartland Moor to arrive at the car park at the track to Middlebere where we parked the bus and set off on foot. Along the track we bumped into a pair of Bullfinches and we scoped a few species out in the fields and reedbeds. We saw Little Egret, Black-headed Gull, a large flock of Lapwings and three distant Sika Deer, there was plenty of common birds along the track. Just before we reached the hide two Eurasian Spoonbills flew over us. 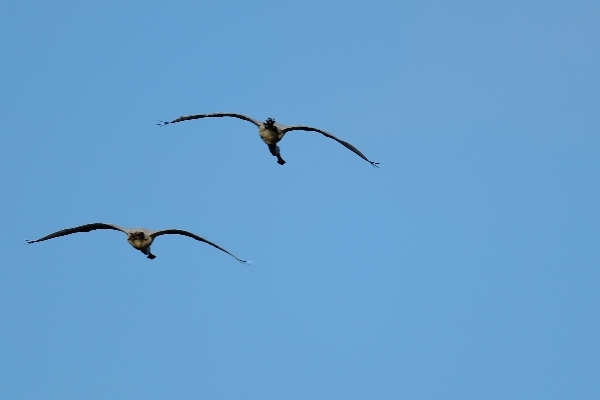 two Spoonbills flying over us at Middlebere, taken by Richard

The sun came up and finally the light improved as we reached the hide, we had timed it well as the tide was about 90 minutes before being at its highest. We spent a fantastic hour or so viewing the exposed mud where dozens of birds were feeding or sleeping. Our target number two was quickly in the bag as we found two Spotted Redshanks. Also on view was: dozens of Avocets, 20+ Common Redshanks, a few Curlews, big flocks of Dunlin, plenty of Teal, a few Wigeon, Shoveler and Mallards. A single Spoonbill dropped in for a short while and promptly went to sleep! 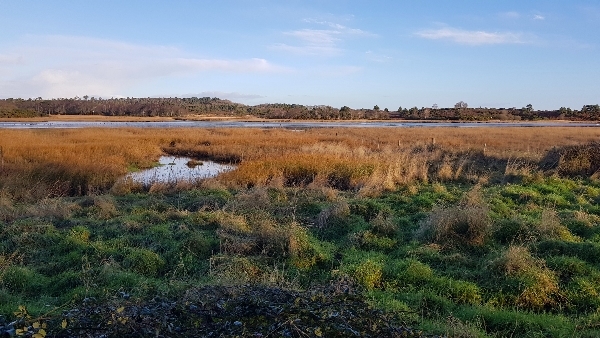 the view form the hide at Middlebere

A small flock of Meadow Pipits landed on a fence and with them we saw a pair of Reed Buntings, a Stonechat sat nearer to us and a Wren flitted about in the reeds below us.

We saw a Marsh Harrier in the distance as well as a pair of Common Kestrels and then suddenly the start bird appeared right in front of the hide, a female or Ringtail Hen Harrier!!  It flew about 50 meters away right across our field of view, oh what a beauty! That left the group buzzing with excitement, we left the hide to see if we could relocate the bird but it never reappeared. 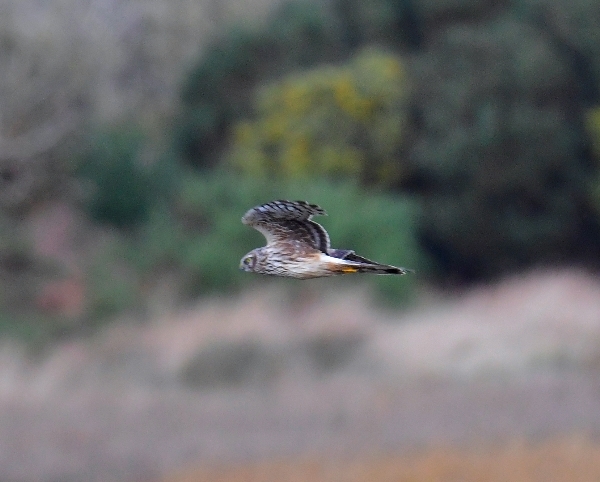 Hen Harrier captured by Richard from the hide at Middlebere

Next, we drove down to the RSPB Reserve at Arne and visited the car park area to look for Firecrests, I had seen them there on January 1st with Guy Campbell. We noted Coal, Blue, Great and Long-tailed Tits, Nuthatch, Chaffinch and plenty of Robins. Then a single Firecrest appeared and showed extremely well at eye-level, what a little gem that bird is, it went straight to bird of the day status, the Hen Harrier dropped down a peg, how fickle we are! 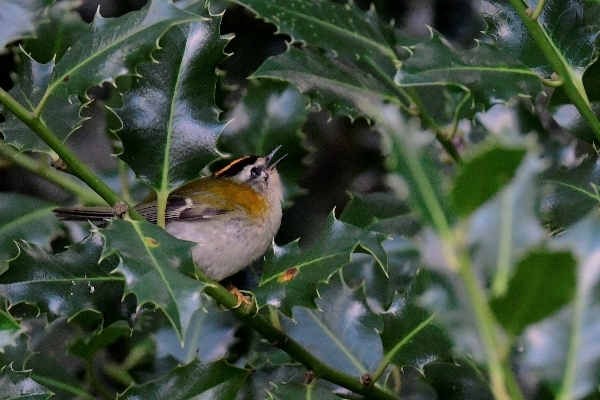 the holly and the Firecrest by Richard Pettett

We sat in the café drinking a well deserved coffee before walking into the mature woodland nearby to look for other woodland species, it wasn’t long before we located a Treecreeper and to our great amazement another Firecrest appeared in the ivy wrapped around an oak tree! Wow, another great sighting. 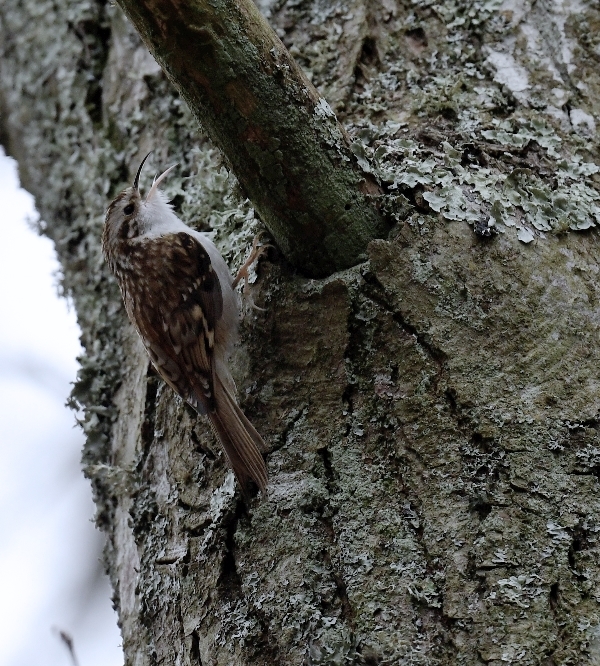 this Treecrepper was singing, taken by Richard

It was now 12 noon and we began to lose the sunshine, rain was forecast for later so we tried to make it to other sites before it got too bad. We stopped in Wareham to buy lunch and then continued to Wareham Forest, we parked along the northern edge besides a farm where we looked for Yellowhammers. We saw Redwings, Fieldfares, Chaffinches, Goldfinches, House Sparrows and Dunnocks but no Yellowhammers.

As we made our way back towards Weymouth we stopped at the Watercress beds at Crossways were we found our first Grey Wagtail with Meadow Pipits and Pied Wagtails, it started to rain just then.

Nearby we pulled into Silverlake as the rain increased in intensity, a quick scan of the pools produced several sighting including Egyptian Geese but not the hoped for Goosanders. The rain drove us off. We moved onto another site nearby where I know Lesser Spotted Woodpeckers breed, it was sheltered there but the rain was quite intense and we saw very little except for a mixed ‘tit flock’.

We got back onto Weymouth around 3pm, a quick scan of Weymouth Bay from Greenhill produced absolutely nothing, so we drove across Weymouth to Ferrybridge, it was slow going in the school-time traffic. The rain stopped and it got lighter, but the wind had increased. A second cup of coffee was followed by a quick scan of the mudflats produced sightings of Brent Geese, Bar-tailed Godwits, Dunlin, Ringed Plover, Turnstones, Mediterranean Gulls and a flock of Linnets.

Before retiring for the day and before it got too dark we drove to Chesil Cove once more (our third attempt) to look for a Black Redstart, which did not appear once again! We gave up at that point and drove into Weymouth passing Radipole Lake where the Starling murmuration was just ending, we saw the birds dropping down into the reeds as we arrived! Doh!! 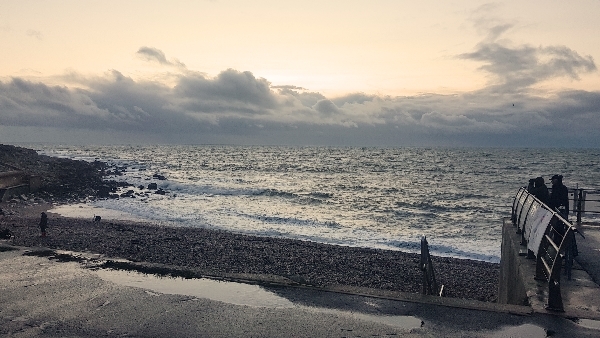 a wet and windy Chesil Cove at 4pm

It was a brilliant morning up to about 1pm, then the day sort of fizzled out as the weather deteriorated, the forecast is for more wet and windy weather tomorrow, such joy!!