WEATHER: wet and windy for most of the day with dry spells. Temp 6 -11C

It was a lot warmer today and the winds had died down somewhat, the rain was light but was with us for most of the day and heavy in spells.

I am getting fed up with this wet and windy weather, the light has been very bad too, but we have to soldier on regardless. We set off at 8am and headed for Abbotsbury Swannery a few miles west of Weymouth, we noted many released Pheasants, also Little Egret, Buzzard, Lapwing and many gulls in the fields once we had left the main road but no sign of any Partridges.

At Abbotsbury we were hoping to scan the main pool from the road but with the rain coming down at 45 degrees in our faces and the terrible light conditions we abandoned after five minutes of seeing nothing!

In Lyme Regis it was much calmer and the rain had stopped for a spell, we parked near the river Lim and within a couple of minutes we had found our target bird, the Dipper. Not one but two birds performed well, it was fascinating to watch them from above and see them walking about underwater. A Grey Wagtail appeared too, nice one, job done. 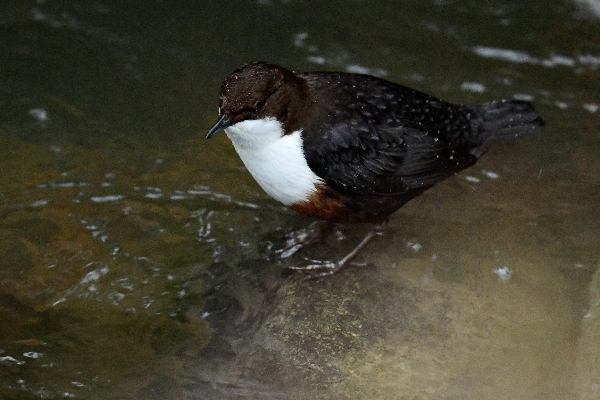 in very dark and dismal conditions Richard Pettett managed to get a few shots off, well done matey 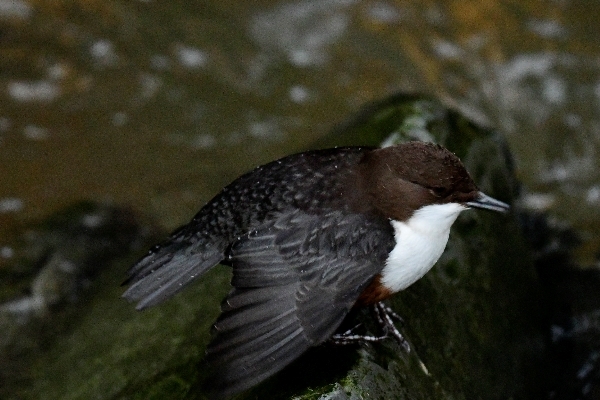 It was a very different story at the sea front, a westerly wind was whipping the waves up and over the Cobb (sea-defence wall), we were hoping to see Purple Sandpiper there but their usual roost site was under water for most of the time. As we walked along the sheltered lea side of the Cobb we noted a dozen or so Rock Pipits with quite a few Wagtails, we walked half way along the trying to avoid a soaking as huge waves crashed over the high wall showering us with sea-spray, occasionally a huge wave would come over the top and we had to avoid that one. 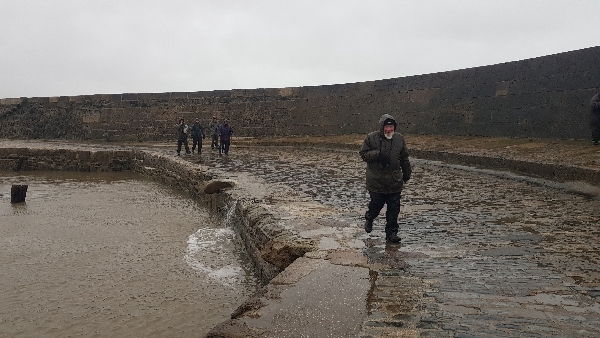 on the Cobb at Lyme Regis, waves were coming over the top of the sea defence wall

Searching the small harbour and the area around the buildings on the Cobb we realised that the sandpipers were not there but as we walked back to the car park we checked the beach area and found a mixed flock of Ruddy Turnstones and Purple Sandpipers! Hooray, some of the birds flew up onto the Cobb wall and over to the sheltered side, so we walked back and found them having a bath in a puddle. 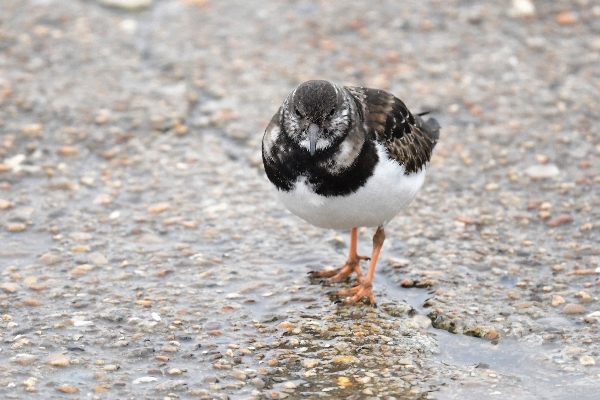 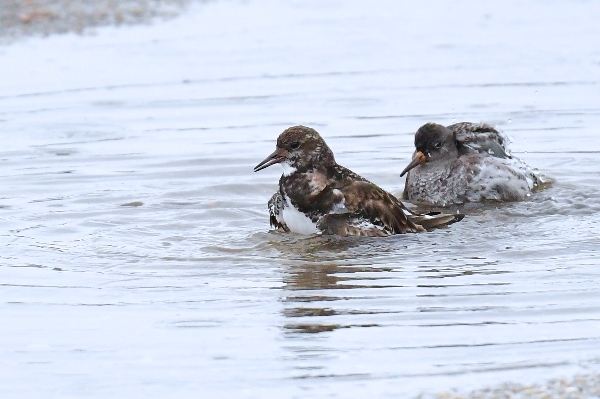 two in a bath, Turnstone and Purple Sandpiper

We then drove down into Seaton visiting a supermarket for lunch supplies before driving the wetlands a couple of miles out of town, we noted the river Axe was almost bursting its bank during this high tide period.

At Black Hole Marsh we sat in the island hide and scanned the marsh, it was flooded with hardly any mud showing and very few birds were out there. We noted Common Shelduck, Teal, Oystercatcher, Common Snipe, Moorhen and Grey Heron and that was all! 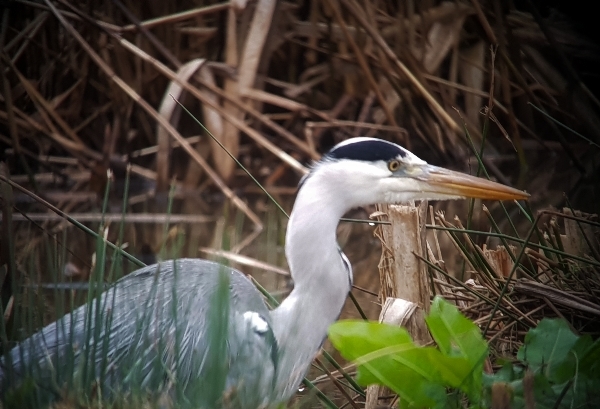 At the Discovery Hide we saw a Kingfisher, our first for the trip would you believe, we also scanned the Water Meadows in the distance and saw a lot of birds out there, so we walked to the hide that over looks Colyford Water Meadows, it started to rain once again as we walked out in the open area. 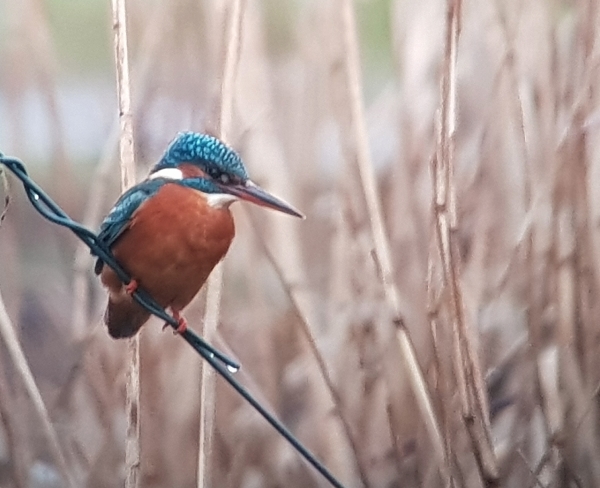 our first Kingfisher of the Tour, my phone-scoped picture above and Richard's DSLR camera below 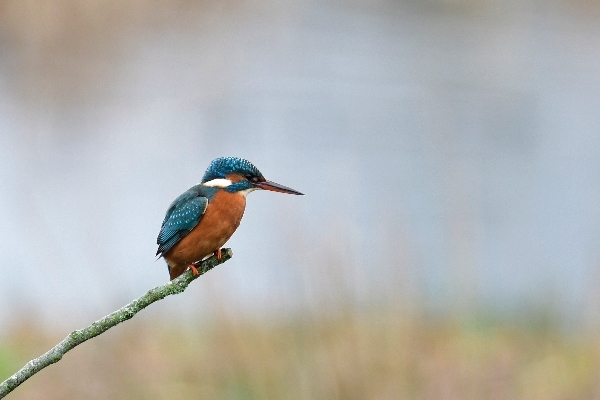 From the hide we saw a large flock of Canada Geese (one of which looked like a hybrid between a Canada and a Bar-headed Goose), dozens of Curlews fed in the meadow with Lapwings, Common Shelduck and lots of corvids. The best sighting was made by Linda, she picked out a nest box near a farm building and on closer inspection you could see a Tawny Owl looking out of the entrance hole, fantastic, well done Linda! 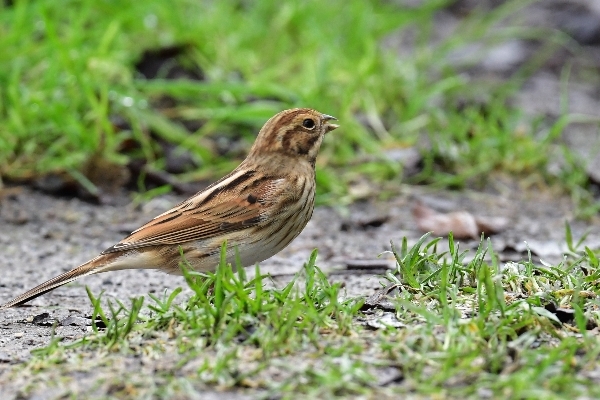 Richard's Reed Bunting, seen at the feeders on Seaton Marshes

From Seaton we drove back Abbotsbury but we made a stop in West Bexington to look for Yellowhammers and a possibly a Cirl Bunting. This stop was a big mistake because as we left the bus it started to rain and got progressively worse the further away from the bus we walked. We found the correct spot for the buntings, but with a howling wind and wind-driven rain we had no chance of finding anything.

On reaching Abbotsbury for the second time the sky was much brighter and the visibility had improved 100%. We scanned the pool from New Barn Lane and picked out Teal, Shoveler, Red-breasted Merganser, Wigeon and then we found a flock of Tufted Duck and Common Pochard. Our target birds the Great & Lesser Scaup were supposed to be with such a flock. 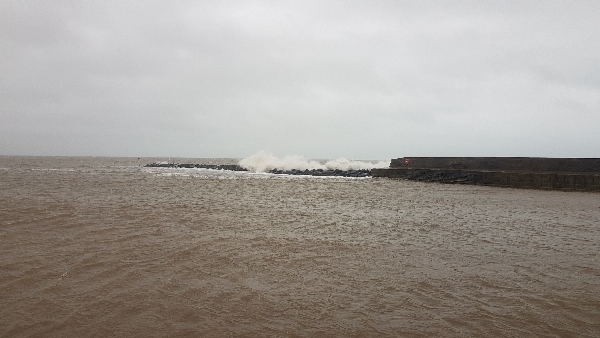 the end of the Cobb showing the extension of rocks, normally this where the Purple Sandpipers roost - errr....but not today!!

As we were watching the ducks Pam called out a Hen Harrier!!! Learning from our experience at Middlebere Pam correctly identified a Ring-tailed Hen Harrier, wow, what a great find!! The rain came back with a vengeance and drove us off. 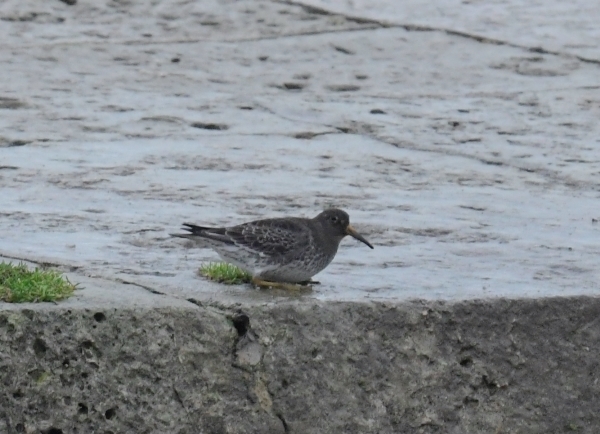 another of Richard's Purple Sandpiper shots

Back in Weymouth we had a time for a quick walk onto the reserve at Radipole Lake, we were hoping for a sighting of Bearded Reedling and sure enough a small bunch of them appeared in the reeds along the main track. Unfortunately, they did not stay around long enough for Linda, who was most desperate to see them, she missed the sighting, 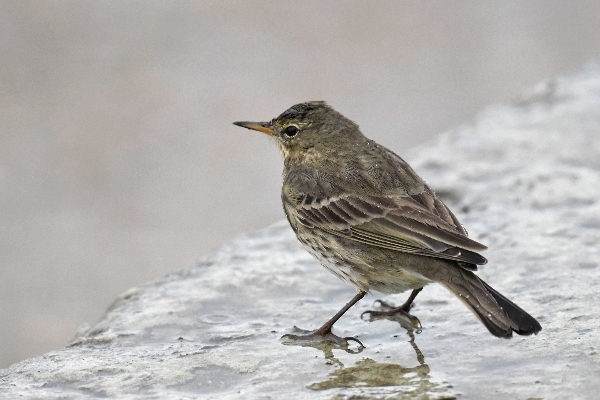 you don't get much closer than this to a Rock Pipit, taken by Richard Pettett on the Cobb

We hung around for the Starling murmuration and even though there was only a thousand or so birds they performed well. Many shapes and formations were produced in the sky which precluded their dive into the reeds to roost. In the meantime, we saw a Marsh Harrier in ther distance and a Sparrowhawk flew over us before we left.