Our early morning (pre-breakfast) trip found us at Ham Wall at 7:30 waiting for the Starlings to errupt from the reedbed, we had an excellent turn-out with 12 out 14 participants on duty. The 'murmuration' coming from the reeds got louder and louder but yet you couldn't see a single Starling. As it got lighter large groups of them began to move around the reeds flying en-mass from one set of reeds to another.

The noise got louder and the movement more frequent, 'clouds' of Starlings began to rise up, like a bubbling bath of hot tar. Then the mass exodus began, great swirls lifted up and headed in all directions, at one stage the sky was completely covered in Starlings, it was amazing and well worth the effort of getting out of bed.

We noted the usual ducks, herons and egrets as well as both Common Buzzard and Marsh Harrier. We arrived back at our lodgings at 8:20am for a nice hot cuppa and a lovely breakfast.

It was 9:30 when we set for Westhay Moor, we parked at the north end of London Drove and scanned the fields below the slopes of the Mudgely Ridge. We noted 2 Cattle Egrets,a couple of Great Egrets and a single Little Egret, in fact it was an egret fest. We also found a large group of Redwings feeding in the grass with a flock of Starlings. 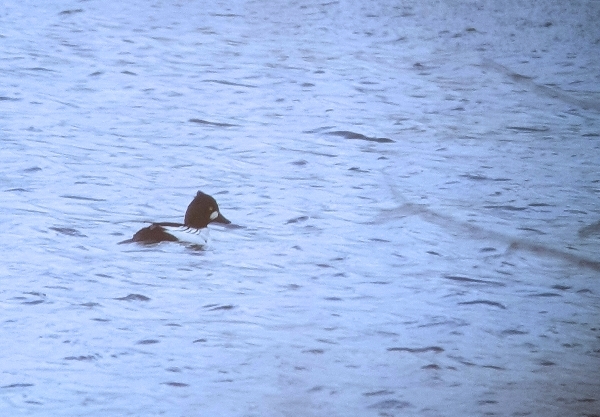 A Song Thrush sang from a pine wood and apart from a small flock of Goldfinches not much else was noted until we reached the first of the small lakes of Westhay Moor. We found more Great and Little Egrets, Grey Herons, Great Crested Grebe, Mallards and Shoveler before we noted a pair of Goosander.

On the second pool we found another Goosander, also a Goldeneye, more Shoveler, Gadwall and Teal. Great Egrets seemed to appear everywhere we looked, they are so common these days. We found a flock of Long-tailed Tits, Blue Tit and Great Tit and a Cetti's Warbler called from the dense scrub.

sheltering from the rain in a Cafe in Chaddar Village, how nice!

We sat in the North Hide for about 30 minutes, it was lovely to see Gadwall at close quarters, we had a brief view of Little Grebe and good views of Marsh Harrier. On the way back to the bus we saw a large mixed-flock of about 30 Cattle Egret, 6 Little Egrets and 4 Great Egrets, they were all roosting in the trees around one of the pools. A single Raven flew past us but only a few of the group saw it.

As we neared the bus a Stock Dove was seen flying nearby, we scanned a flock of Jackdaws in the fields and found a few Rooks, carrion Crows and Starlings before we set off for Cheddar.

The sky was get getting progessively darker, it looked as though the weather forecast had been correct, rain was on its way. We made it to the reservoir at Cheddar and managed to have 10 minutes birding before the rain started, during that time we noted Common Gull, Black-headed Gull, thousands of Common Coots, a few Tufted Ducks and a single Common Pochard. By the time we had driven into Cheddar village the rain was coming down in buckets.

a view of Catcott Low Reserve

For lunch we managed to sit in a cafe drinking hot drinks whilst eating our packed lunches, we all dried out and warmed up. by the time we left the cafe the rain had stopped, but it was still very overcast and dull. We decided to return to the levels at Catcott Low Reserve because we could get to a large hide without too much walking just in case it was raining. 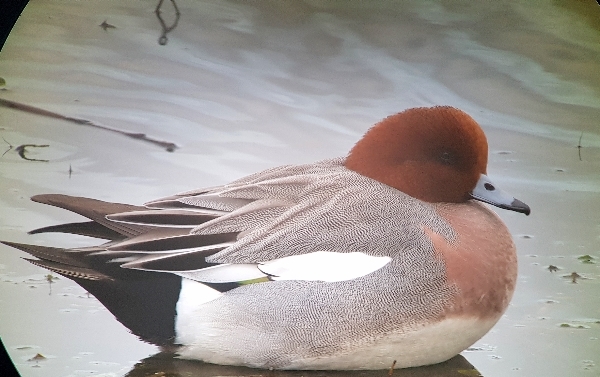 close up shot of a Eurasian Wigeon, the light was quite bad.

It was quite the contrary as far as the weather was concerned, because it got brighter and brighter as time went by and in the end we had a clear sky and sunshine. The birding was excellent from the hide, especially the ducks. Eurasian Wigeon in particular were colourful, noisy, numerous and very entertaining. We also found Northern Pintail, we added both Greylag Goose and the unexpected Egyptian Goose to our list as well as Common Stonechat and a Roe Deer. Another nice sighting was of a Merlin, this bird was quite distant but it sat out on several posts before we lost it completely, nevertheless it was a great bird for the list. 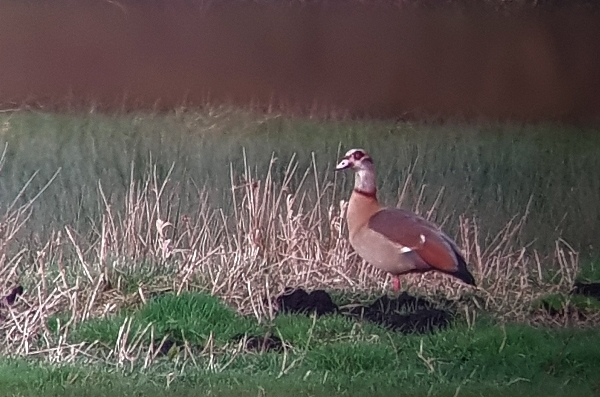 A local guy told us about an 'expected' Hen Harrier, he was adamant that it would arrive, so we waited until nearly dark and sure enough a female (or Ringtail) Hen Harrier flew in from our right and scared the life out of the Wigeon before disappearing over the back of the marsh, fantastic, it was a terrific bird for our Somerset list. 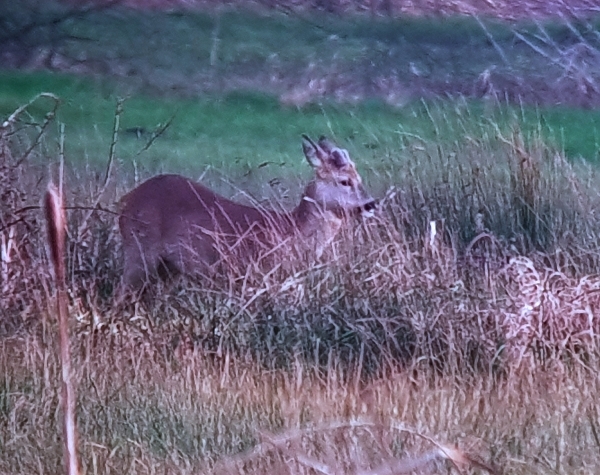 We departed soon after that, it was dark a few minutes later, it had been another super day on the 'Levels'.