It was another great day on the ‘Levels’ spoilt only by the lack of a good starling ‘murmuration’ at the end of play. We set off at 8:40 and drove to RSPB Ham Wall car park and after checking the feeders we walked across to the track that led to Shapwick heath and Noah’s Lake.

there was a beautiful sunrise this morning

A few meters from the car park we bumped into a Firecrest, this bird showed really well and everyone got to see it. We also saw our first Bullfinches and we found Long-tailed Tit, Blue Tit and a single Coal Tit, a few of the group had seen Coal Tit at the feeders in the Ham Wall car park.

on the track to Noah's Lake

The large pool at Meare Heath was covered in ducks, I have never seen so many Gadwall in one place  there was dozens of them. A Marsh Harrier flew across the rear of the lake and we also noted Shoveler, Teal, Wigeon, Tufted Duck and Mute Swan.

From the raised Hide at Noah’s Lake we had panoramic views across a huge body of water that was also covered in ducks, geese, swans, cormorants and grebes. Wigeon were the most numerous but Shoveler numbers were also very high. We had good close views of Great Egret, Grey Heron and we searched for a pair of Whooper Swans without success.

view from the raised hide at Noah's Lake

Just outside the hide we found a mixed feeding flock of Goldfinch, Chaffinch, Siskin and Blue Tit, we then found a Treecreeper feeding nearby. In the scrub near the car park we watched another small group of Bullfinches and we bumped into another flock of birds, mainly Long-tailed Tits, but also Blue Tits, Great Tits and Goldcrest. 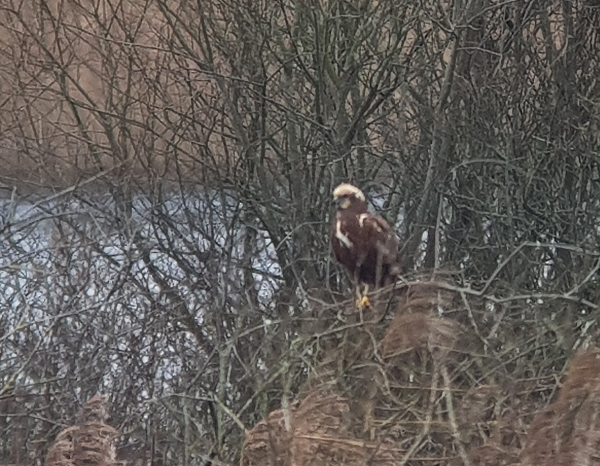 record shot of a Marsh Harrier at Noah's Lake

We took a coffee and snack break at the visitor’s centre at Ham Wall during which time we saw Pied Wagtail on the power lines and a Reed Bunting at the feeder.

We spent the rest of the afternoon walking to the Avalon Hide, having our picnic lunch there and then walking back to the Starling Roost at Viewing Platform 1. Along the way to the hide we found several more Goldcrests, Common Chiffchaff, Wren, Dunnock and a Water Rail.

At the woods near the Avalon Hide we stopped to watch a Redwing feeding on the ground beneath the trees and by doing so we missed a sighting just around the corner of a YELLOW-BROWED WARBLER. Ouch!!

Never mind, it was getting quite windy and it started to rain so we moved along quickly to the Avalon Hide where we spent an hour or so eating lunch and watching whatever came into view. We had good views of Common Snipe, lots of ducks, grebes, herons and egrets, but not the Bittern we were hoping for.

Around 3pm we left the hide and made our way to Viewing Platform 2, w estopped to watch Common Chiffchaffs (3), Goldcrests (3) and many common species. One new bird for the list was a Jay.

For the last hour of daylight we stood at Viewing Platform 1 to watch the starlings come to roost, it quite cold, windy and the sky looked almost black. Consequently, the Starling display never happened, in fact a fraction of the regular total number came down to roost near us. They must have gone elsewhere, it was a bitter disappointment for the group and our last opportunity to see it on this trip.

Just as we left the car park in the bus a pair of Barn Owls flew along the tree line away from us, what a nice bonus, that cheered me up no end, alas not many of the group saw them!