Our last day had arrived and we only had a few hours before everyone left for home, so we made the most it as we set off at 8:30am. We drove straight to RSPB Greylake and although the hides were inaccessible because of flooding we scanned the adjacent moors and watched birds at the feeder in the car park. 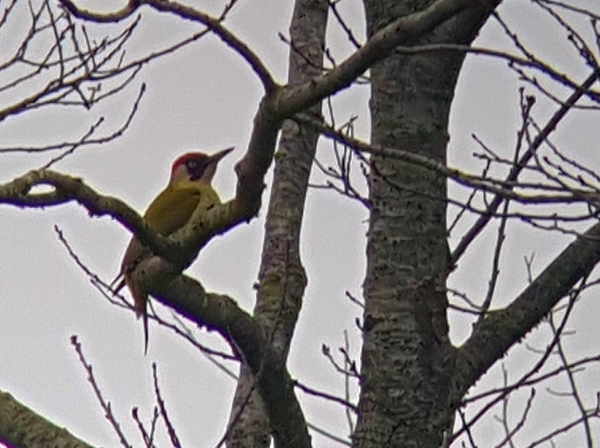 This is the only picture that I took today, record shot of the Green Woodpecker

Next, we made the short journey to Burrow Mump in the village of Burrowbridge and after finding very little of interest around the car park we suddenly found two species of woodpeckers. Both Great Spotted and Green Woodpeckers were feeding on the grassy slope of the ‘Mump’ they eventually flew into a tree and showed quite well. In the distance we saw a lot more Lapwings and a terrific number of Golden Plover high up in the sky.

Our trip to Aller produced a few new sightings as we searched the fields for Common Crane which failed to show. We did see a group of 42 Little Egrets, a couple of Common Buzzards, a single Fieldfare and a Mistle Thrush. Just before we left we were watching a small flock of Goldfinches when our first Meadow Pipit landed on a nearby roof!

We had very little time at Swell Woods, just enough to enjoy the birds coming to the feeders in the car park. We stood by the side of the bus and watched many birds coming down to feed on peanuts and sunflower hearts. Eurasian Nuthatch was new for the trip as was Marsh Tit, there was also a good number of Coal Tits, Blue Tits and Great Tits.

We left the woods at 11:30 and made our way across the moors back to Meare to our hotel, at 12 noon the trip was over. I said goodbye to the group and made my way home. It had been an excellent trip and we had been very lucky with the weather. We saw 77 species without leaving the ‘Levels’ except for Swell Woods, the group went home happy and I went home happy and well fed, wait until my wife sees my new waisteline!