All of the group arrived safely just after 9pm on the 4th, I collected them and transferred them to our overnight hotel in Barajas, close to Madrid Airport. This morning we all met at 6:45 in a local café for toast and coffee. 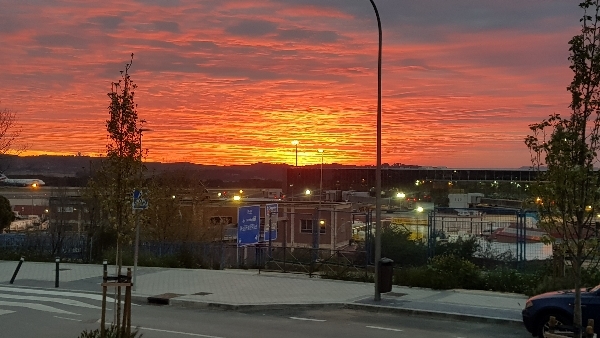 We were on our way by 7:30am heading southwest out of the city towards Extremadura. We did see White Stork in the plaza at Barajas in the dark as we left. During the journey many species were seen and some were identified: both Red & Black Kites, Common Buzzard, Common Kestrel, Corn Bunting, Eurasian Magpie, Spotless Starling, Marsh Harrier and lots more White Storks.

After leaving Madrid metropolis it started to drizzle and as we progressed the rain increased in intensity, we stopped for Coffee and a snack before making the final leg of the journey, arriving at Almaraz at 10am.

Having scouted out this lovely orchid spot last week it was a pleasure to return there so soon and with a group of very enthusiastic people. We saw most of the species I listed last week, but most of the Mirror Orchids had gone over and only a few individuals remained. We saw Naked-Man, Champagne, Yellow, Woodcock, Mirror, Tongue and Conical Orchids. 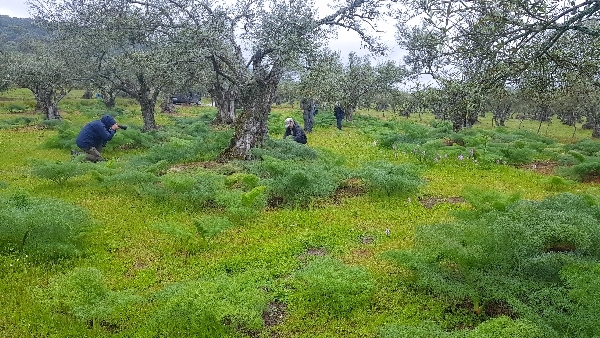 in the Olive grove Orchid Field at Almaraz 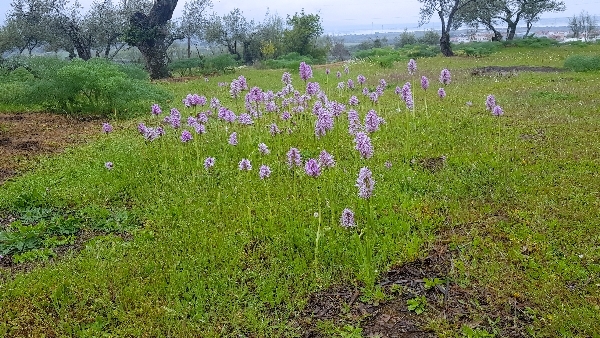 a bunch of Naked Man Orchids

For the next couple of hours we visited the nature reserve at Arrocampo just up the road a little way from Almaraz. We stopped near the main causeway between the main part of the reservoir, it was very windy there, a cold biting wind, 6C was recorded on the bus dashboard but it felt much colder. 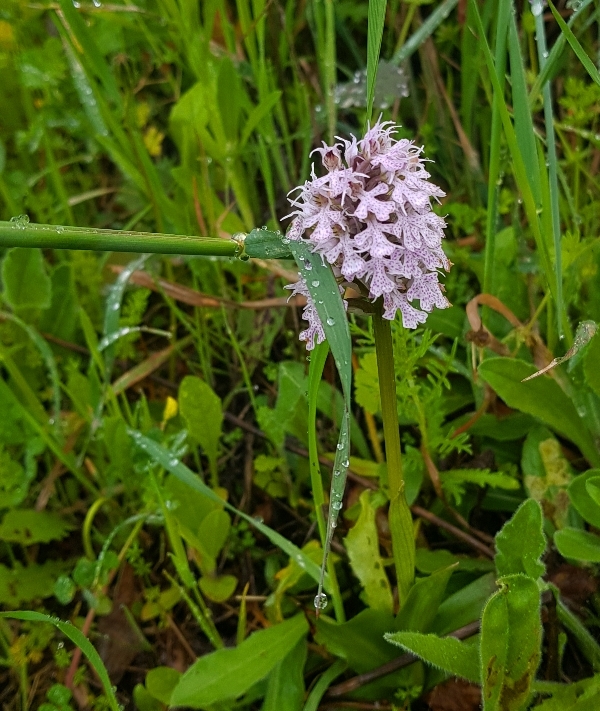 I love this one -  Conical Orchid 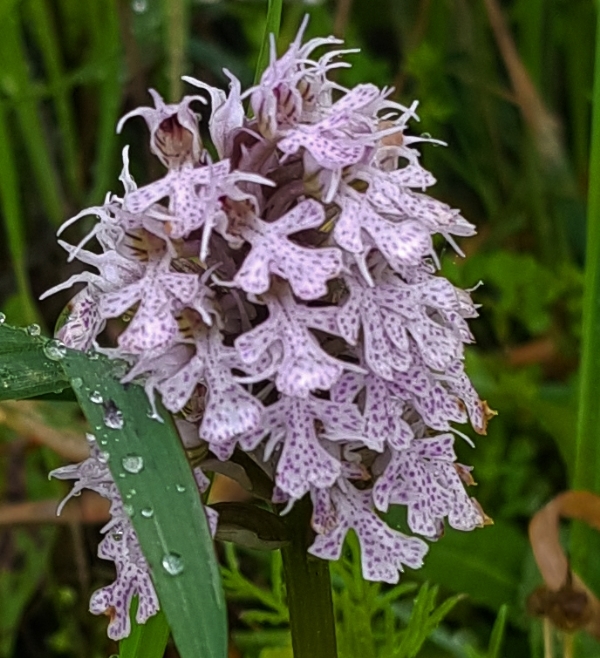 a close up of the beautiful Conical Orchid

We managed to see a few species, Purple Herons were everywhere, Great Egrets were dotted about the reedbeds, Purple Swamphens forage at the base of the reeds. We heard one or two Savi's Warblers but the wind kept them down, out of sight.

We collected the keys to the hides from the visitor’s centre and spent a little time in each of the three. They are raised hides to give good views over the embalse (reservoir) and reedbeds. From the hides we saw Gull-billed and Whiskered Terns, Black-headed Gulls, Great (Continental) Cormorants, Little & Cattle Egrets, a single Black-winged Stilt, two Ferruginous Ducks, but not a lot else on the water (which was steaming!! It is used to cool the reactors of the Almaraz nuclear power plant and was obviously warmer then 6C).

Birds of prey filled the sky, vultures, eagles, buzzards, harriers, kestrels and kites, Extremadura always has a sky-full of raptors in the spring, summer and autumn. Over the water hundreds of Sand Martins were joined by House Martins and Barn Swallows but very few warbles were seen in the area. We had excellent views of a pair of Crested Larks, Spanish Sparrows, a brief Zitting Cisticola, a Hoopoe and some Goldfinches.

We ate a tortilla lunch in the town before heading off to Jaraicejo heathland to look for Dartford & Spectacled Warblers, it was a complete waste of time, far too windy, nothing was showing at all. More vultures filled the sky, ominously circling above us?

The last birding session of the day was in the valley below the village of Jaraicejo where 3 bridges cross the Rio Almonte. We stood on the 'oldest of the three, the 15th century 'Puente de cardenal' and spent a fabulous hour as we watched dozens of birds in a relatively sheltered area. 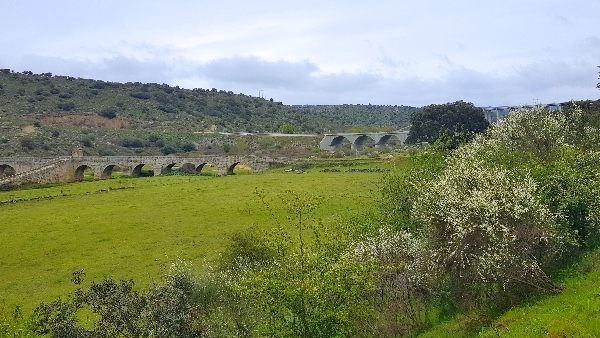 the 3-bridges valley near Jaraicejo - you just make out the modern, third bridge in the top-right of the picture 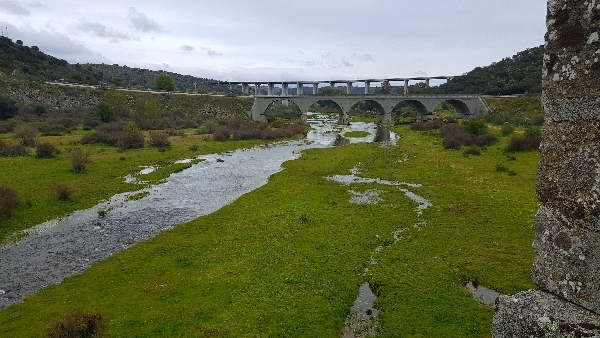 Both Griffon and Black Vultures were ever present in the sky, we saw another Short-toed Eagle and a distant Spanish Imperial Eagle (just me), Black and Red Kites. We gave up around 5pm and set off for our hotel arriving some 25 minutes later. We saw Mallard, Little Grebe, Iberian Magpies, Spotless Starlings and lots of Eurasian Magpies, A Raven flew past the bus as we trundled along. 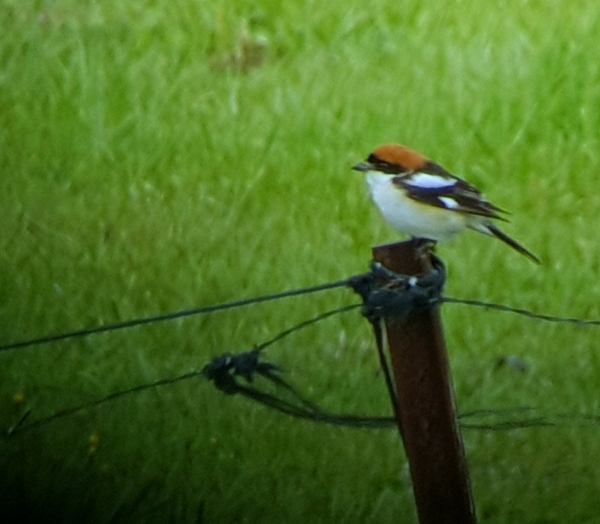 a record shot of the distant Woodchat Shrike

Whilst on the hotel steps I spotted another Spanish Imprial Eagle, but it was drifting away and once again no-one else got onto it. We settled into our rooms and met up at 7:30pm for a pre-dinner drink and to run through our checklist. We called out 61 species, but sighting of the day,    was the field of orchids!!