Breakfast was served at 8am and we were finished and loading up the bus an hour later, the short trip into the park took about 10 minutes.

Our first stop was the cliff face below the Castillo de Monfragüe where you can see Griffon Vultures on the nest and a few other species that breed on the rock face. Several pairs of Griffon Vultures were present and we also enjoyed good views of Serins, Black Redstarts, Crag martin, Red-rumped Swallows and a few House Martins. 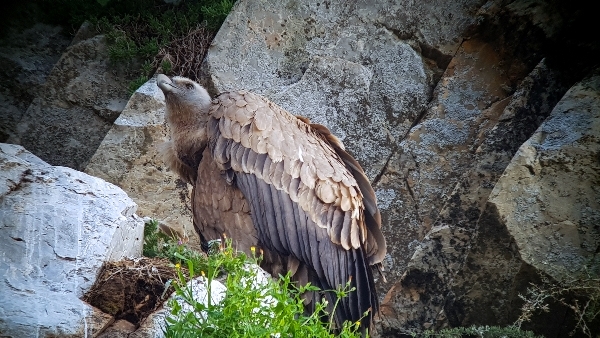 A short walk along the lane didn’t produce many more species except for typical garden birds such as Blue & Great Tits, Blackbird, Blackcap and Chaffinches.

The viewing area around the Salto de Gitano was crowded as usual with many photographers present, it is a wonderful site for viewing vultures in flight. We spent a lovely hour there watching the vultures wake up and gather in the sky as the air warmed up. We saw all three European Vulture species, Griffon, Cinereous and Egyptian. 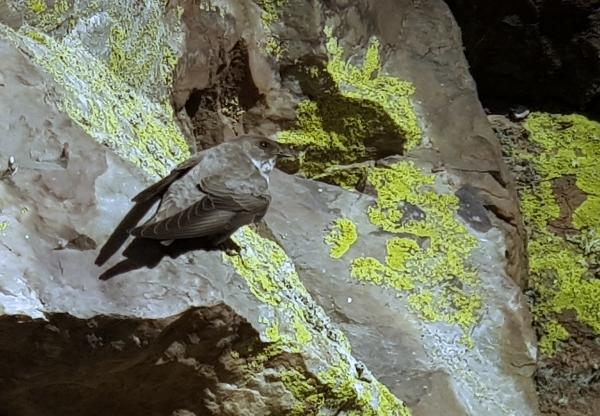 We were lucky enough to see Peregrine Falcon, Black Kite, a distant Imperial Eagle and a Short-toed Eagle, once again I spotted a distant bird that no-one else got onto, it was a Booted Eagle. On the rocks at the base of the huge cliff face of the Salto we saw two different nests of the Black Stork with parents in attendance and on the rocks all around we watched at least four male Blue Rock Thrushes, Black Redstarts, Rock Buntings, Goldfinches, Wrens, Crag Martins and more Chaffinches. 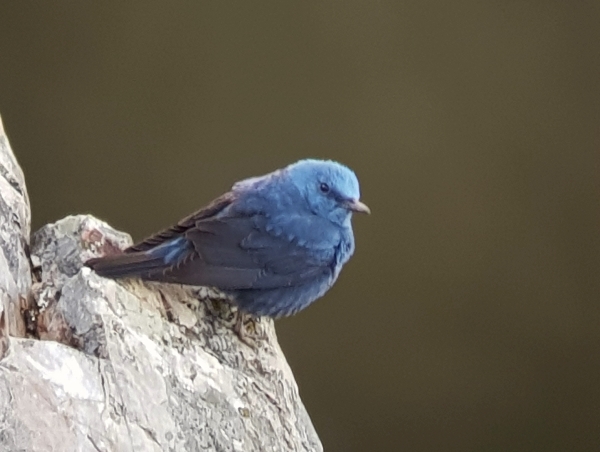 Driving down to the large bridge over the Rio Tajo we parked the bus and began a walk along the Fuente de Frances trail. Immediately after we left the bus a Bonelli’s Eagle very over the top of us not more than 20 meters above us, wow!! The walk along the trail gave us good views of the bridge which hosts thousands of pairs of House Martins, we searched for Alpine Swifts and eventually found a few pairs. 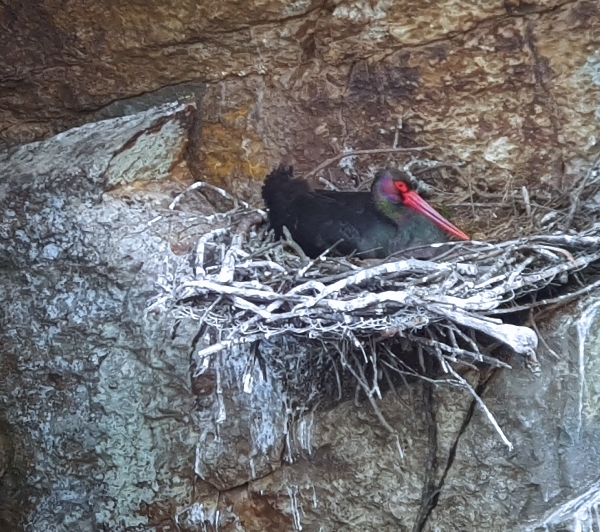 The walk produced more Blackcap sightings nut no other migrant warblers, we did the Bonelli’s Eagle again as we returned to the bus. Our next stop was for lunch in the village of Villareal in the centre of the park. We sat out in lovely warm sunshine and ate our bocodillos (filled rolls) and drank lovely coffee or cold drinks.

Driving deeper into the park we stopped at the Mirador Tajadillo where we saw a pair of Egyptian Vultures mating and a few Siskins in the car park. Black Kites roamed the cliff face and a few Griffon Vultures sat on nests. 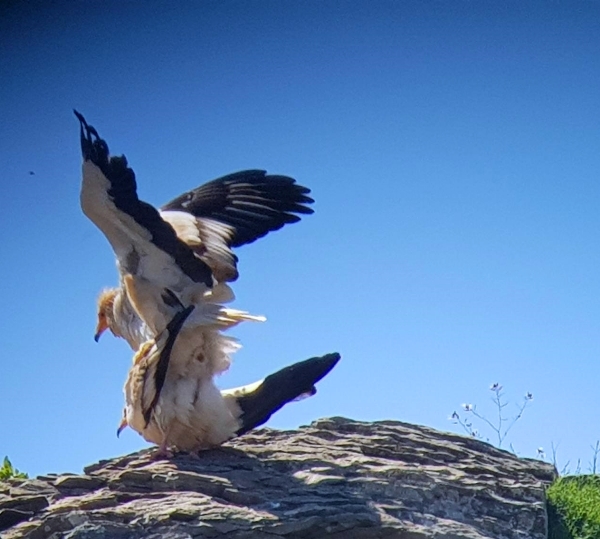 We crossed the dam and made our way to the Mirador de Portilla de Tiétar where we spent some time looking for better views of the Imperial Eagle. We saw Short-toed Eagle hovering, lots more vultures (Cinereous and Griffon) and more Black Kites. As we left Mike called our Imperial Eagle, we had excellent views in superb afternoon light of the bird, what treat for all of us. 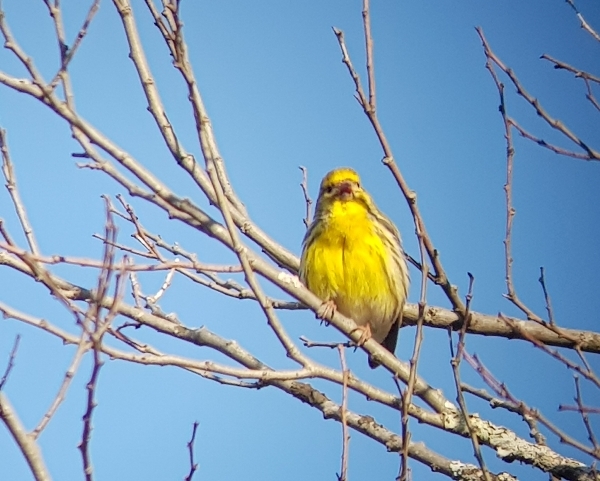 A walk in the dehesa (managed cork oak woodland) produced a few good sightings. Woodlarks we walking about in the grass which had be ploughed up in places by Wild Boar, we also saw several Woodchat Shrikes, Azure-winged Magpies, Great Spotted Woodpecker, Short-toed Treecreeper, Eurasian Nuthatch, Spotless Starling, we also heard Common Cuckoo, Eurasian Hoopoe (it showed to a few of us), but we didn’t see a single warbler. We did find some more Tongue Orchids and we saw a female Ocellated Lizard! 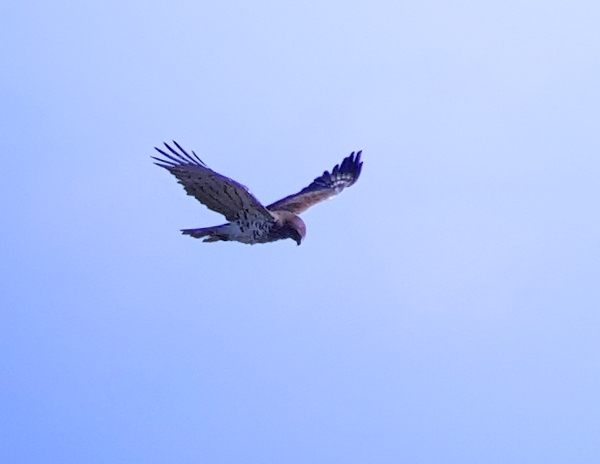 Finally we sat in the late afternoon sunlight at the hotel Rural de Puerta de Monfragüe eating ice-creams, where we had another great sighting of an Imperial Eagles. As we left we gathered some information about the sighting of an Eagle Owl from the Castillo de Monfragüe so we decided to drive up there and give it a try.

From the car park at the Castillo we had to climb a stone staircase with over 100 steps, that was tough at this late hour. From the top we could find the Owl! Paul’s camera battery died, so he walked all the way down to the bus and back again to get his spare!! He got some excellent eye-level shots of vultures.

We enjoyed the afternoon sunlight but a chilly wind had developed so we retired for the day. After driving into the village of Torrejon el Rubio for petrol and snacks for tomorrow we arrived back at the hotel at 6:30pm.

We ate dinner at 8:30pm the service was very bad and wasn’t until 10pm that we were served our desserts!!