Our last full day had arrived and we intended to make the most of it, we were out before breakfast in the dark for a visit to the laguna and to watch the Ibis roost-site. As the sun rose so did the noise level coming from the roost as the Ibis and Egrets began to stir. Soon small groups were flying around over the roost and as the numbers increased they set off towards to the marshes of the Nacional Park to feed for the day. Hundreds of Glossy Ibis left the roost during the next half-an-hour, Cattle Egrets flew over from another roost and Night Herons dropped in having finished their night shift. As the light increased we could see the whole laguna, a huge cloud of terns could be seen swarming over the water, we estimated that over 1,000 Whiskered Terns had arrived overnight, along with huge numbers of hirundines, especially Sand Martins. 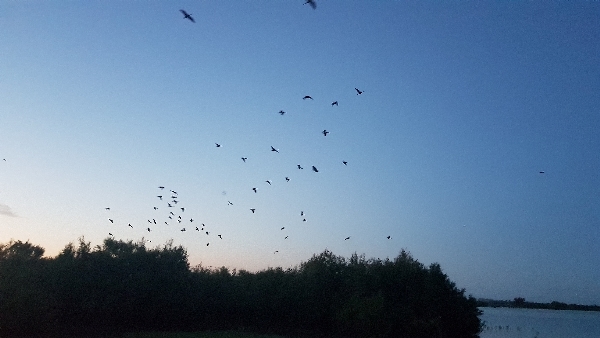 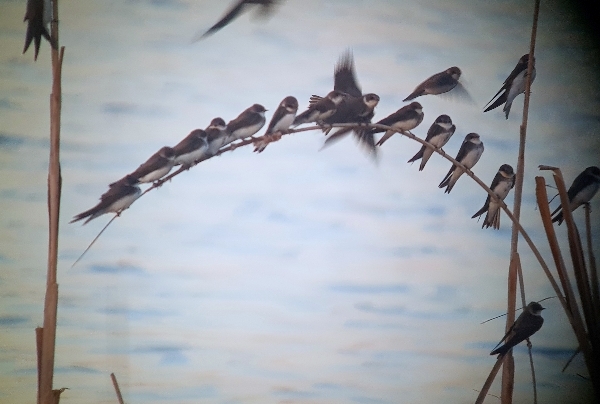 Sand Martins, they landed in such numbers that they bent the reed stems

As the sun rose the sunlight brought to life a moving, colourful spectacle of epic proportions, I have never seen so many birds in one places. Sand Martins alighted on the tall reeds and weighed them down, bent them over, as they landed in such large numbers. 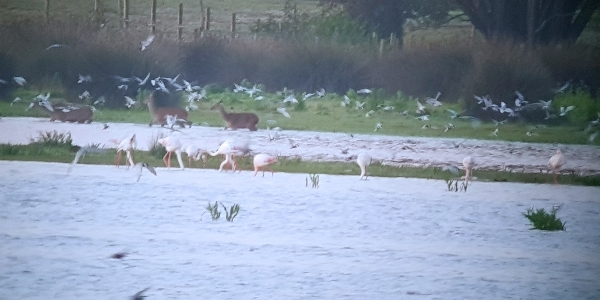 Swamphens fed beneath them, Reed, Great Reed, Cetti's and Sedge Warblers sang from within the reeds and Spoonbills, Ibis, Herons and Egrets fed around them. A cacophony of sound came from a plethora of species the colour of the morning light brought it all to life, it was a magical experience and a lasting memory. 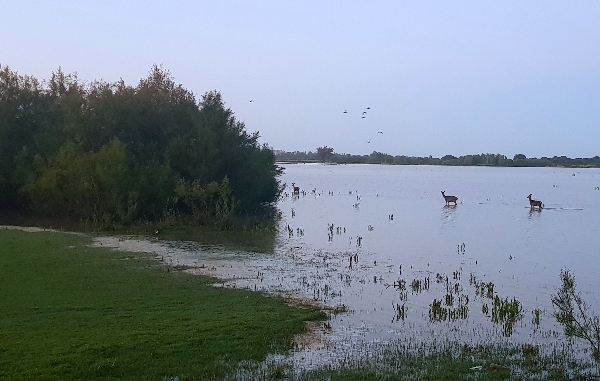 Red Deer near the Ibis roost

After breakfast we loaded up the bus and left the sandy streets of El Rocío and headed for Malaga. The roads were clear and we made good time, passing through Sevilla without a hitch, it was 11:30 when we arrived at Laguna Fuente de Piedra our first and only birding stop.

The approach road to the main Laguna borders a large seasonal pool and several birds were feeding there, so we stopped for a quick look. A single Black Tern was feeding over the water with a Whiskered Tern, they both gave incredible views, the photographers had a field day. Also on the pool was: Greater Flamingo, Black-winged Stilt, Common Sandpiper, Avocet, Shoveler, Eurasdian Coot, Moorhen and not much else. It was a poor show of species considering that usually at this time in April the pool is covered with waders, the water level was probably a little too high this year.

We walked to the first boardwalk which bisected another pool and once again very little was seen out there. Iberian Yellow Wagtail, Cetti’s, Reed and Sedge Warblers sang out and the ubiquitous Black-winged Stilt was ever-present. 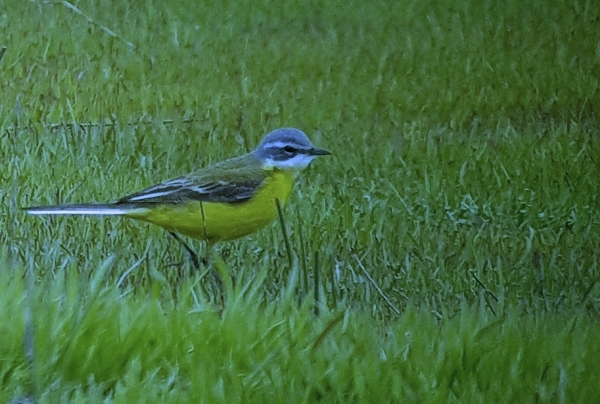 From the boardwalk we retraced our step and headed for the mirador behind the visitor’s centre where we had good views of the main laguna, it is immense and stretches as far as the eye can see. A good number of Greater Flamingo’s were feeding or loafing quite close to the nearest shore and with them we picked out two LESSER FLAMINGOS. Not entirely unexpected, this somewhat, smaller African species has had a small presence in Spain in recent years, it is very possible that these are specimens that have arrived naturally. 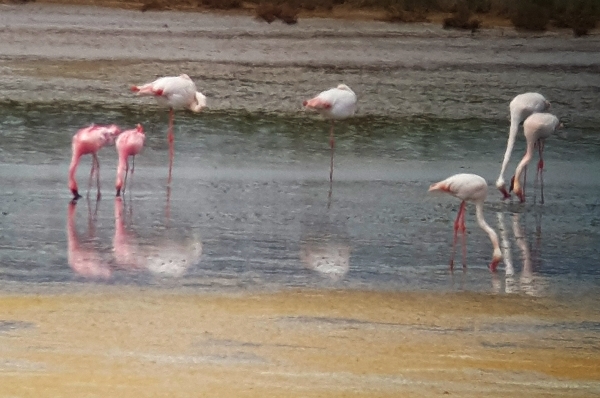 Also on the main pool we saw Common Shelduck, Avocet, our first Kentish Plovers, Curlew Sandpipers, Black-headed Gulls and many Gull-billed Terns. After watching the flamingos for a while we walked around to the hide that overlooks the freshwater pool called Lagunetta.

The main reason for visiting Fuente de Piedra was to see the iconic White-headed Duck and we were not disappointed, we saw a dozen or so, both male and female ducks fed in the pool. We also notched up to five more Marbled Ducks, a few pairs of Black-necked Grebes, also Common and Red-crested Pochards, Shovelers, Swamphens, Eurasian Coots, Moorhens and more Common Shelduck. 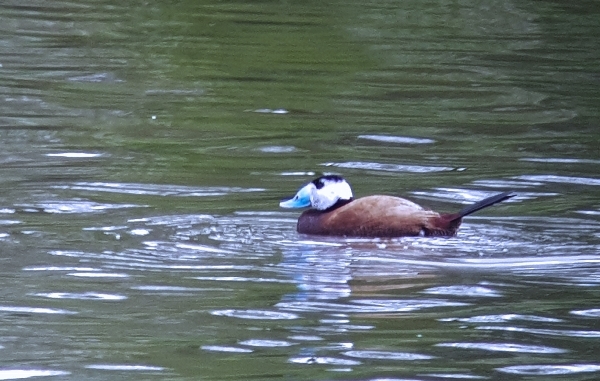 White-headed Ducks always look a little sad to me!

Mike Hails did his, 'now normal' trick of pulling a great bird out the bag when he discovered a LITTLE CRAKE mooching about on the far bank where a group of Spanish Pond Terrapins were hauled up in the reeds. We all had good scope views but it was too far off to photograph properly, we had only poor record shots.

After visiting another hide and a blind we added a few more common species, so we decided to depart. A quick stop for a second look at the pool on the approach road produced, Green Sandpiper, 3 Common Sandpipers and two Ruff, the Black Tern was still showing exceptionally well. 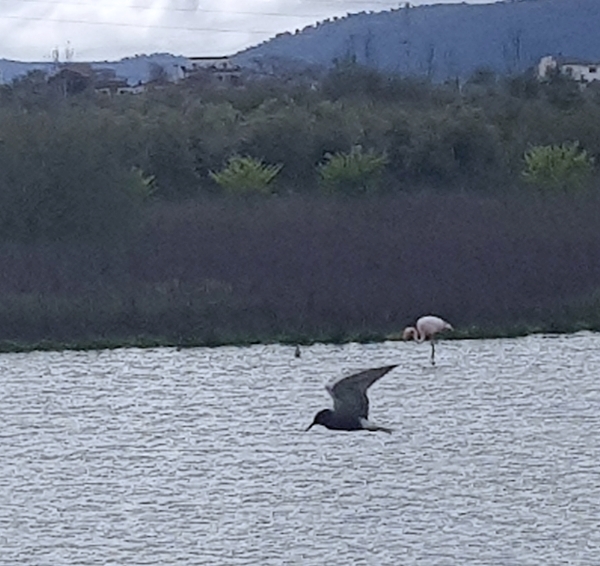 We stopped in town to buy picnic supplies and promptly ate them whilst in a car park at a petrol station. The drive down to our hotel in Malaga took about 45 minutes, Griffon Vultures were the most notable species during the journey. We checked in, had a little break and met up again at 3:30pm.

Our plan was to visit the lovely Parque Natural at Guadalmar near Malaga Airport and not far from our hotel. The Rio Guadalhorce splits into two arms as it nears the Mediterranean Sea and several pools are located within the area between the river arms, there are also reedbeds, tamarisk scrub, a beach area and open scrubland. The Reserve is called Desembocadura de Guadlahorce (the estuary or river mouth of the river Guadalhorce) and has a great reputation for producing an excellent bird-lists. 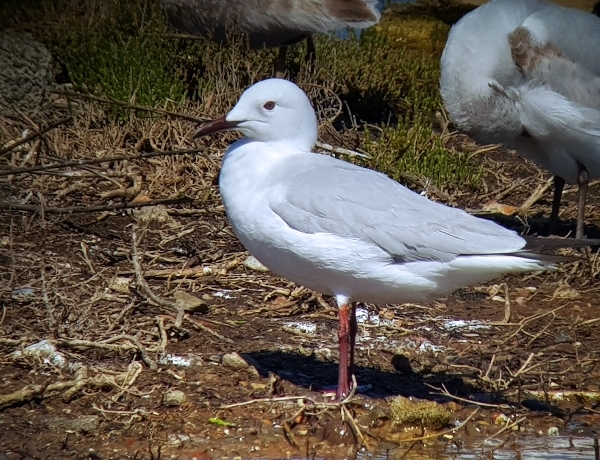 It was full-on sunshine when we got there but quite windy, we parked in Guadalmar and walked on the embankment of the southern arm of the river noting a Sparrowhawk, some Monk Parakeets, Common Kestrel, Spotless Starling, Mediterranean Cormorants (sinensis), Barn Swallows and not much else.

The first hide we visited overlooks Laguna Grande, my last visit about 10-days ago produced a lot of bird sightings, including a Bonaparte’s Gull, but today it was almost devoid of life! How disappointing was that? 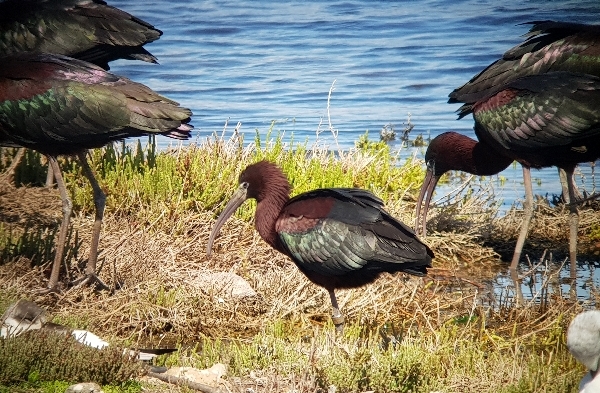 We saw 3 Slender-billed Gulls (one with a broken leg), a couple of Black-headed Gulls, a single Mediterranean Gulls, a Single adult Yellow-legged Gull and a single Sandwich Tern. No waders were present at all except for the reliable Black-winged Stilt. Scanning the large pool we picked out Eurasian Spoonbill, Shoveler, Gadwall, Mallard, a Whiskered Tern, Grey Heron,a few Cormorants and a group of Glossy Ibis dropped in to see us.

Before we left a Common Sandpiper landed below us and Mike picked out a Collared Pratincole that dropped in as we left. We then took the track to the beach where we hoped to see Kentish Plover a little closer. This we did, except that we got too close before we realised that they were present, so we had close but brief views of them as they flew off up the beach. We also found 3 Greater Ringed Plovers and a flock of 22 Greater Flamingos entertained us by flying up and down the beach area several times, sometimes close in sometimes way out. 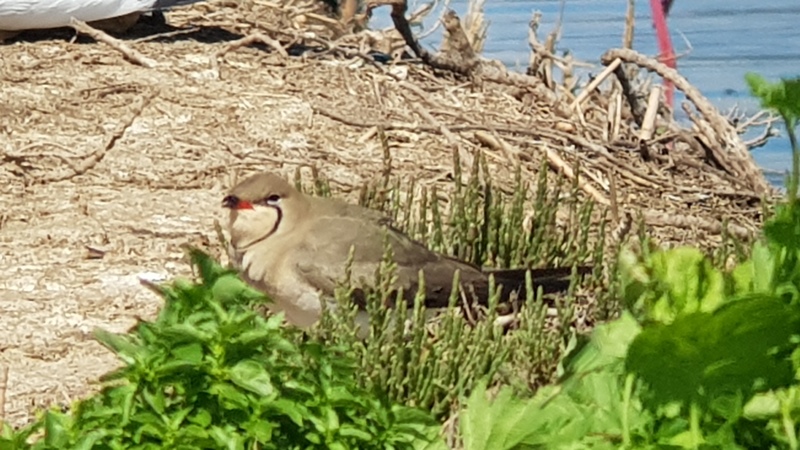 Sandwich Terns and Northern Gannets were also out at sea, we also saw single Mediterranean Gull sitting on the water. Our circular walk including visiting hides that overlooked the Rio Viejo (Old river) and Laguna La Casilla where we saw very little, Redshank, Avocet, Black-winged Stilt and another Slender-billed Gull.

That was our last planned bird excursion of the holiday, we returned to the hotel and met up again at 7:30pm to go out for our last supper. We found an excellent little Chiringuito on the beach in Guadalmar where we all enjoyed our evening meal together.

Reflecting on our trip sightings, we recorded 183 species plus 1 heard and not seen, Common Quail. It had been an excellent birding holiday, Black Tern was given the most votes for bird of the tour, but a good number could have received that accolade. I just enjoyed watching the group having a great time enjoying their favourite pastime.