WEATHER: an awful start to the day with a lot of rain and wind, it brightened later but stayed windy and quite cold.

A 7am breakfast at the Holiday Inn Malaga Airport was much better than expected and after eating well we boarded the bus for our long journey into Extremadura, our next overnight stop will be in the ancient roman town of Mérida.

A few weeks ago I flew over the huge Fuente de Piedra lake, it was practically dry with a tiny pool of water in the middle. So I had such a surprised when we got there today to see it full to the brim and the surrounding fields flooded. The small pools around the visitor’s centre were too deep for most wader species and looking for Crakes was a waste of time. 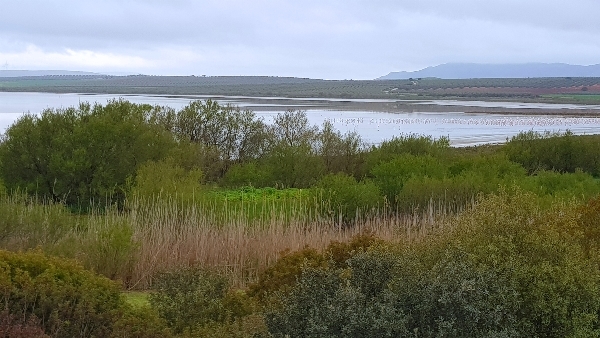 The rain had eased when we got there but we did have couple of showers whilst we were in the hides. A quick inspection of the pools along the approach road produced the usual Black-winged Stilts, Avocets, Gull-billed Terns, Shoveler, Moorhen, Eurasian Coots and Greater Flamingos, but there was no sign of the Little Gull reported there yesterday.

From the short boardwalk we added very little except for Common Shelduck, Little Ringed Plover, Reed and Sedge Warblers, we heard Nightingale and Cetti’s Warbler. The lookout point behind the visitor’s centre gave us a panoramic view of the huge lake, we could see a couple of hundred Flamingos nearby and several flocks far away in the distance, the numbers were very low and breeding will probably not take place because of the lack of water earlier in the year. 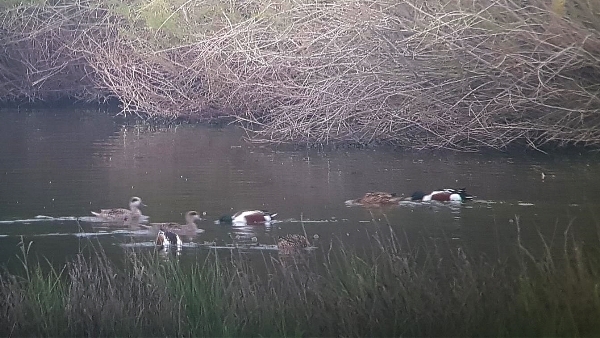 I bumped into a local birding guide, Mick Richardson, he was scanning the lake and he called a Lesser Flamingo in one of the distant flocks and we quickly got onto it.

Our visit to the hides was quite rewarding, we saw three Marbled Ducks, a dozen White-headed Ducks, Common and Red-crested Pochard, Shoveler, Gadwall, Eurasian Teal, Little and Black-necked Grebes and lots of common ducks. 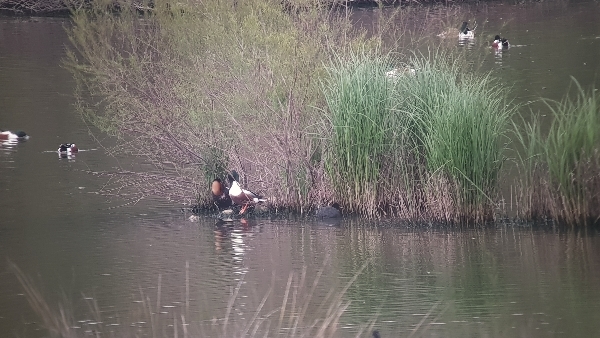 there is a Red-crested Pochard in there somewhere

On the way out we found the Wood Sandpiper that Mick had mentioned to us and whilst we were watching it a Water Pipit, in summer plumage dropped down to the water’s edge, a lovely couple of birds to finish off the visit with.

We drove through quite heavy down pours as we made our way to Sevilla, our aim was to make a quick visit to a local park before travelling up to Mérida. The sat-nav got us straight to the park then we had trouble finding the pools that we wanted to see. In the meantime we saw Ring-necked Parakeets, Hoopoe, Woodchat Shrike, Bonelli’s Warbler, Subalpine Warbler and lots of common species. 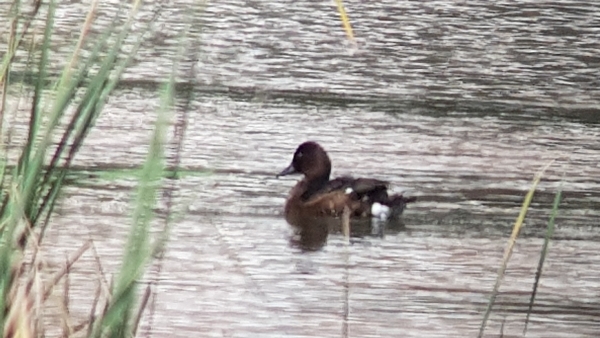 The 'nature pool' held a pair of Red-knobbed Coots (these are released birds and wear a white collar), but we also saw three Ferruginous Ducks, Little Bittern and few Little Grebes and Moorhens.

We were back at the bus by 1pm and set off for Mérida, a stop for lunch at a roadside café was made some 40 minutes later. As we made our way into Extremadura we starting seeing raptors in the sky, some Red Kites, Black Kites, Booted Eagles, Griffon Vultures, Ravens and a couple of Kestrels. 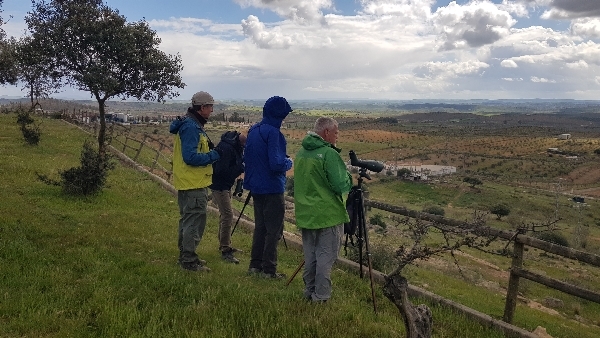 at the lookout at Hornaches watch-point, watching Iberian Magpies and Red-legged Partridge

The next stop was at a raptor watch-point just outside the village of Hornaches, it was windy and cloudy and rain threatened to cut short our visit. After a short squall of rain we had some activity in the sky above a ridge. A flurry of Griffon Vultures, Booted Eagles and Black kites came through, the best sighting was off a Golden Eagle which came right over the top of us. 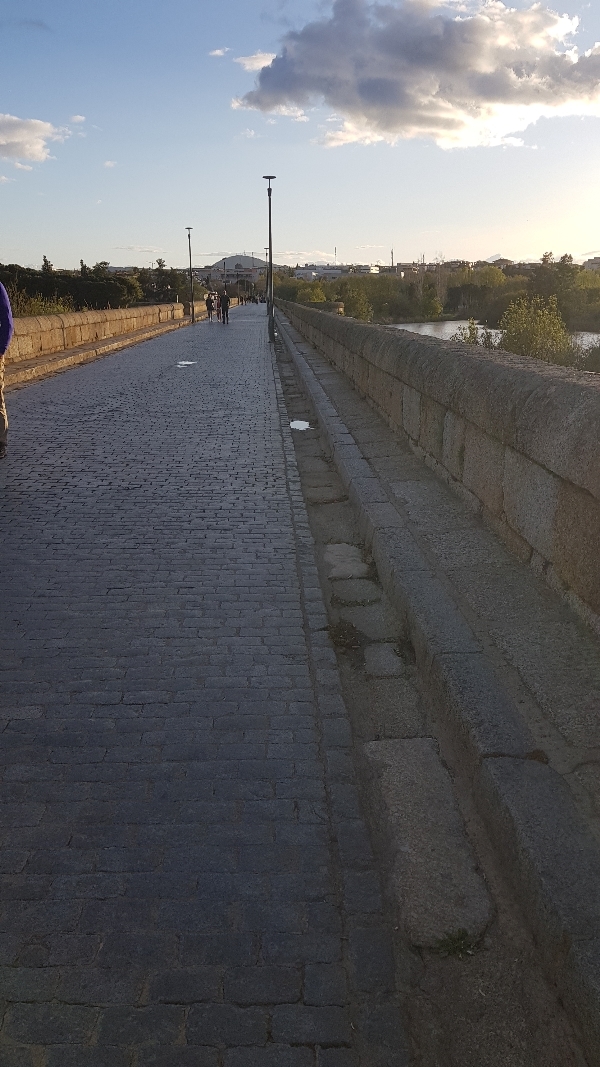 The Roman Bridge at Mérida

The sun came out for a while and we stayed, this time we looked down into the scrub below the watch-point, we saw Serin, Red-legged Partridge and much to the delight of my American companions, a ‘flock’ of  Iberian (Azure-winged) Magpies.

Our next stop was just outside the village of Alange at the dam, the water level was low but recent rains had brought it up a tad. We saw Alpine Swifts visiting their nest site along the dam, there are reportedly over 1,000 pairs nesting there!! On the rock face we found a Black Wheatear and in the scrub we saw Linnets, Goldfinches, Sardinian Warblers and Chiffchaff sp. 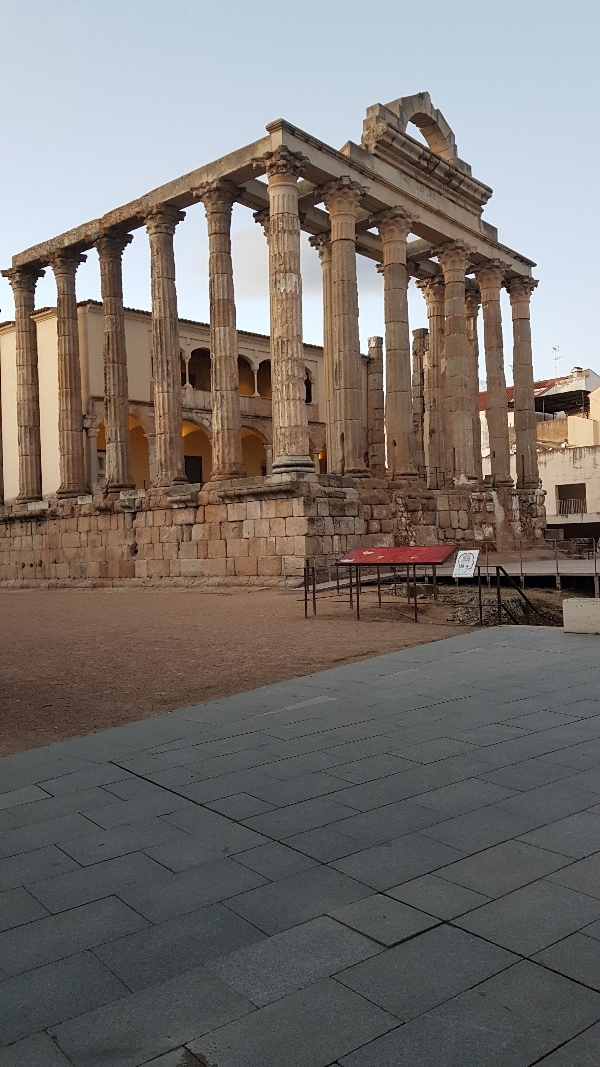 no it's not our hotel for the night, Roman Ruins seen from the window of the restaurant where we ate dinner

We never scanned the reservoir very much but we did see Egyptian Goose and Great Crested Grebe. Above us we saw White Stork, Black Kite, Griffon Vulture and Booted Eagle but our search for Rock Bunting went unrewarded. Before we left the area we drove across the dam and up the hill to look at a roadside site for Giant Orchids. Most of them were going over but some of them still looked good. A second species was growing besides them, yet to be identified.

We finally made it to our accommodation in Mérida, we had hired a house for one night in the town centre and after a short wait we were let in. Two of the group walked into town to eat immediately but three of walked down to the famous Roman Bridge to bird watch until sundown. As usual the bridge was crowded with people and many birds were flying around. The 700 meter bridge is the longest remaining Roman birdge in the world, it spans the mighty Rio Guadiana.

We found Purple Swamphen, Little Egret, Moorhen, Black-crowned Night Heron and a search for Penduline Tit was rewarded by a brief sighting of a male, but only two of us saw it. Flocks of Cattle Egrets and Glossy Ibis flew over us heading off to a roost nearby. It was the swifts that stole the show, hundreds of Common and Pallid were joined by dozens of Alpine Swifts, they swooped down to eye-level all around us, it was an amazing experience.

As the light faded we walked back into town to meet the other two and enjoyed some nice food before return to our accommodation for the night.