We were up at 6am, breakfasted and had the bus packed up by 7am. We drove to Trujillo in the dark arriving at first light around 8:15am. Our first stop was the Lesser Kestrel colony on the edge of town, there are around 40 pairs, it was busy first thing in the morning with lots of activity. We stood in the cold wind and scoped the nest boxes. 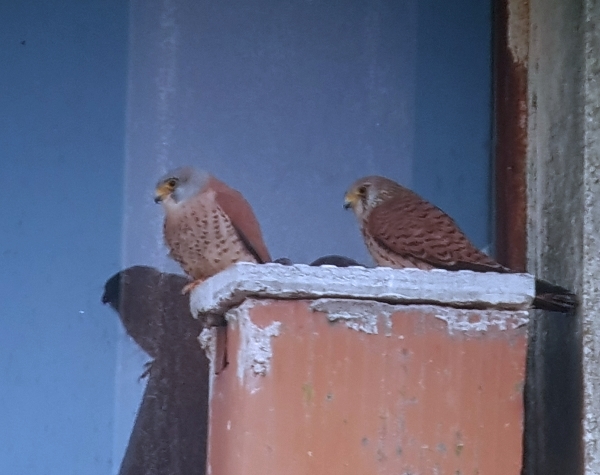 a pair of Lesser Kestrels on a nesting box 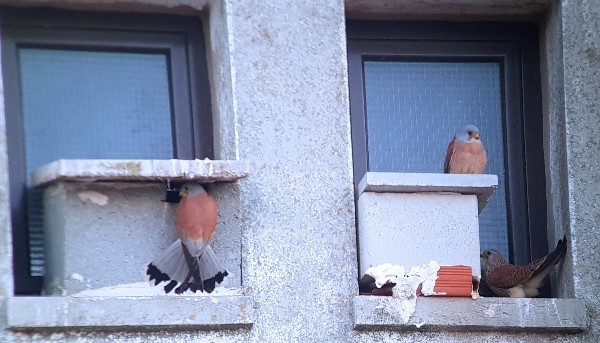 you can see both sides of the male in this shot, showing the lack of spots.

After having our fill of the Kestrels we drove out of town towards Casares stopping at the old bridge just southeast of the town. There we saw Spanish Sparrow, Common Kingfisher, Hoopoe, White Storks, Cetti’s Warbler and we heard Common Nightingale. A short distance away our next stop was an impromptu one as we saw a large raptor sitting on a pylon.

We scoped the bird and discovered that it was a Short-toed Eagle and sitting about a meter away from it was an Iberian Grey Shrike. We also saw lots of Corn Buntings, Short-toed Lark, Crested Lark and Common Magpies.

We turn off the old Trujillo to Casares road and headed towards Santa Marta stopping as soon as we broke out of the ‘dehesa’ habitat onto the plains. From a raised bank at the side of the road we scanned the surrounding fields for Bustards. We found a Stone Curlew, a female Marsh Harrier, lots of Calandra Larks, but no Bustards. A Greenshank was a nice find in a small pool not far below us.

A little further along the road we stopped at the top of a rise and walked across the road to scanned a larger grass field. There we struck gold, we found a party of Pin-tailed Sandgrouse (about 40 individuals) and nearby we saw 6 Little Bustards, 3 males and 3 females. 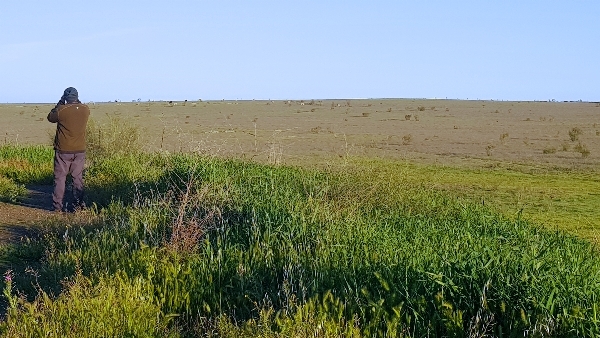 Cásares Plain where the Bustards were seen

We had a wonderful time watching the antics of the males as they competed for the attention of the disinterested females. They ran around chasing one another, they flew around displaying their colourful plumage and the performed their jumping display issuing the ‘farting’ noise as they left the ground.

When we turned around and looked across the road to another field where we saw a male Great Bustard also performing his display to an equally disinterested female. The male’s display is often described as unique in the avian world as it entails a complete transformation of the bird’s appearance, the bird becomes hardly recognisable as a Great Bustard. (google: “Displaying Great Bustards” to see what I mean). 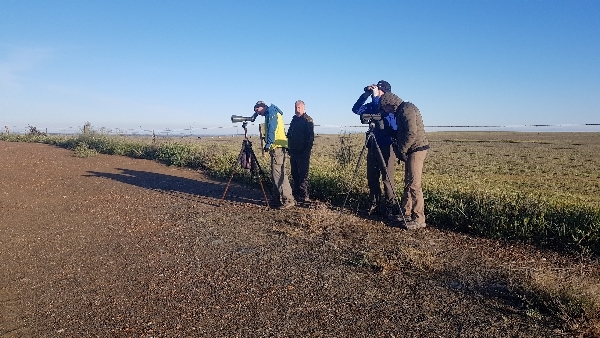 After a while the female Great Bustard flew off, we also saw several other Great Bustards in flight during this time. The sound of a thousand larks all singing at the same time was a constant background noise as spent a great deal of time watching both species of bustards and the sandgrouse.

The air was warming up and various raptors began to appear, we saw Marsh Harrier, Black and Red Kites, Griffon Vulture and Booted Eagle before we moved onto our next site which was a couple of kilometers along the road. 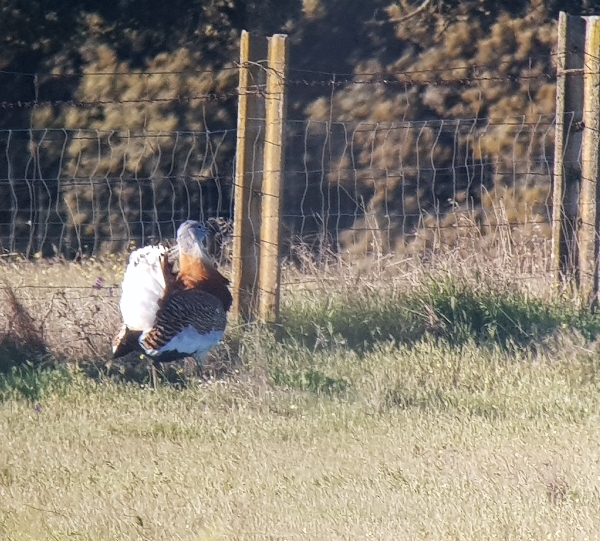 A Great Bustard - not in display mode

On a dirt track leading down into a wide valley between two very large grass meadows we parked the car and made ready for a raptor watch. It wasn’t long before we saw our most wanted raptor, the Spanish Imperial Eagle, a beautiful adult rose on the thermals, circling above us displaying its lovely plumage. Well, my American companions were blown away at this stage and as the air warmed so more soaring raptors became visible.

A female Montagu’s Harrier was a nice find they are getting quite scarce in Extremadura recently, we added Black Vulture to the list and we saw Common Kestrel, both Kites, Griffon Vulture, Booted Eagle and plenty of larks. 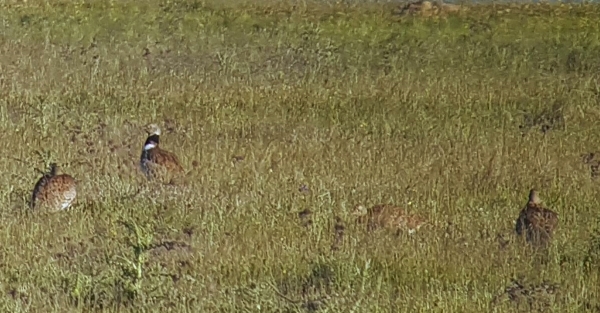 There are four Little Bhustards in this shot - 1 male

From there we drove through Santa Marta and head off towards Casares, our aim was to look at the nest boxes attached to the telegraph poles on Casares Plain, at this time I expected Rollers to be arriving to claim their nest sites.

Along the way we stopped at a bridge to look at Crag Martins and whatever else was about. We saw Pond Terrapins, Marsh Frogs, a few Small Heath Butterflies and not much else. A few Serins, Chaffinches, Blue and Great Tits flitted about.

The nest boxes were a bit of a disappointment, we saw many Jackdaws and Kestrels but not a single Roller, they will arrive any day now, but not today! After driving back to Trujillo on the motorway we had lunch in the Main Plaza which was crowded with tourist but a lovely setting for lunch.

After lunch we drove the short distance to Belen Plain which is another good spot for Bustard sightings but today we were after Great Spotted Cuckoo. Passing through the wide plain we saw the usual larks, Hoopoes and birds of prey and after a few miles were turn off onto a side track.

The habitat of tamarisk, broom and young oak trees is a good habitat to look for cuckoos, where there are Magpies there are Great Spotted Cuckoos, well at least that was the theory!

We spent a hour searching different areas, finding Shrikes, larks, Magpies, Hoopoes but not he cuckoo. We tried one last track before giving and we struck gold, a pair of Great Spotted Cuckoos appeared and showed really well. They flew around us a couple of time and made a lot of noise. Once again I heard ‘oh my god’ coming from my American friends.

From there we drove back to the hotel for a short break before driving into the National park for the last hour or so. We stood with dozens of tourists watching the Vultures at the Salto del Gitano. Our main target was Rock Bunting but we never saw one in the windy conditions. We did see Blue Rock Thrush, Black Redstart, Crag Martin and more Vultures than you can shake a stick at.

We visted a couple of other places, finding Short-toed Treecreeper, Blackcap, Robin, Chaffinch, Great & Blue Tit but not the bunting.

Dinner was sevred at 8:30pm we were in a large dining room with 200+ Spanish Students, the noise level was incredible, we were so glad to get out of there, but the food was excellent.