We had a great day in the heart of Coto Donana an amazing number of birds were seen with plenty of goodies to keep the group happy. We changed our plans from the original itinerary because of the weather forecast, sunshine was predicted for today so we headed out into the open marshes whereas rain is forecast for the next couple of days when we can sit in hides at other locations.

We set out in the dark at 7am carrying our breakfast in a picnic bag, by the time we had driven to our first destination, the Coredor de Verde, it was light. The tracks were in reasonable condition, some large pools lay across the track in places but that was to be expected after the down pour yesterday.

Many birds dashed across the track in front of us we quickly noted Greenfinch, Serin, Blackbird, Corn Bunting and Spotless Starling. A Common Kestrel appeared and several Black Kites scoured the countryside looking for breakfast. We stopped the bus a few times to watch Woodchat Shrike, Common Stonechat, Crested Lark and more Corn Buntings, what a lovely looking bird is the Woodchat Shrike! 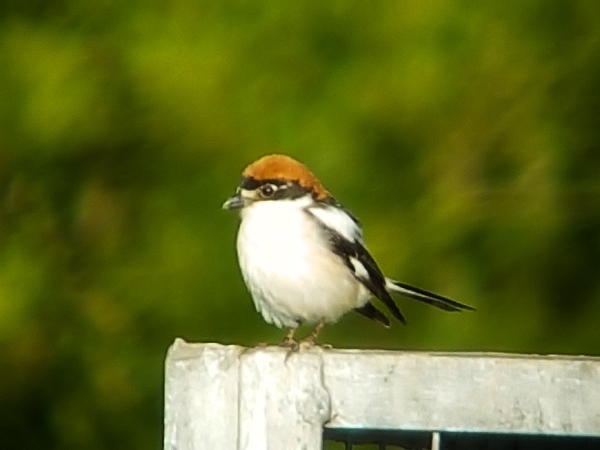 The river Guadiamar flows along the Coredor de Verde and our first official stop was on a bridge over this river. Cetti’s Warblers and Common Nightingales tried to deafen us whilst Serin, Greenfinch and Sardinian Warblers delivered more subtle songs. Two EURASIAN WRYNECKS were ‘courting’ on a dead tree and gave wonderful views but we tried to see Penduline Tit without success.

Next we stopped to eat our breakfast and during breakfast-time we found a perched BLACK-WINGED KITE, this bird proceeded to hunt over the adjacent fields giving us a wonderful display. Our first walk produced Booted Eagle, Common Buzzard, Common Cuckoo (several were heard during the morning), Zitting Cisticola, Serin and hundreds of Common Swifts, Barn Swallows and House Martins, the sky was always full of hirundines. 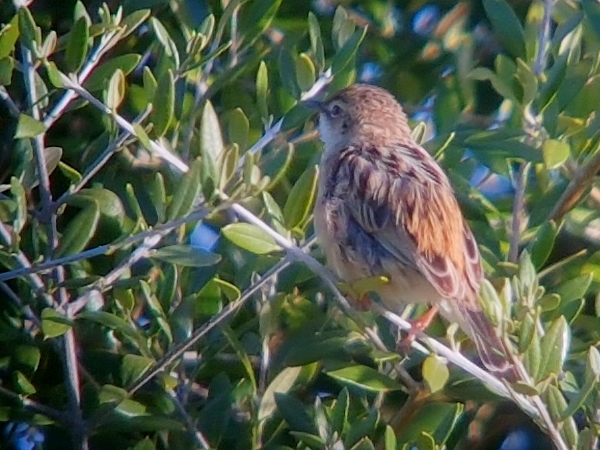 At the laguna Qema we found it quite deserted because of the high level of the water, Great Crested Grebe, Mallard, Common and Red-crested Pochards was all we saw.

Our drive continued along the muddy tracks following the Coredor de Verde back to the main road, we stopped on a number of occasions and listed more species, such as White Stork, Common Nightingale, Sardinian Warbler and as we approached our next venue we stopped to watch a first year Black Stork that didn’t look too well.

Hundreds of Cattle and Little Egrets joined White Storks in the flooded fields, also Grey Herons and Glossy Ibis were recorded. At Dehesa de Pilas (a square eucalyptus wood – nothing like Dehesa) we watched dozens of Spanish Sparrows, a good number of White Storks on their nests an surprisingly a number of Eurasian Spoonbills also nesting. A few (three) European Bee-eaters flew around us and we caught sight of an Egyptian Mongoose chasing a Rabbit along a hedgerow! 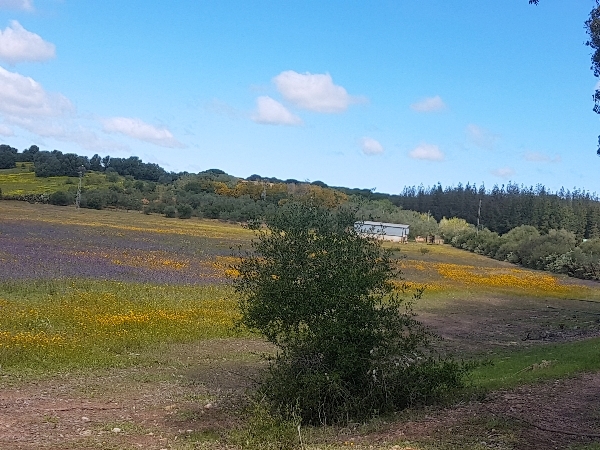 The huge reservoir at Dehesa Abajo was also bursting it s banks so, again, bird sightings were few and far between.  We did see Black-necked, Little and Great Crested Grebes, Great Cormorant, Western Jackdaw, Greater Flamingo, Glossy ibis and two very showy Purple Swamphens. As we drove the length of the reservoir  we noted a few pairs of Red-crested Pochard and not much else.

Everywhere was flooded, every field held some water and the wild flowers were just amazing, we had wonderful light but a cold wind spoilt our enjoyment a little. One small laguna gave us very close views of a pair of FERRUGINOUS DUCKS, they very so confiding we got very close to them, smashing sighting.

A coffee stop extended into lunch but by 1pm we were on the road into the northern marshes where the tracks were in much better condition than I had expected. A series of sightings had us stop-starting many times, we watched many Yellow Wagtails (Iberiae), also Crested Larks, our first Purple Herons, lots of egrets a few Lesser Kestrels and a couple of Marsh Harriers. 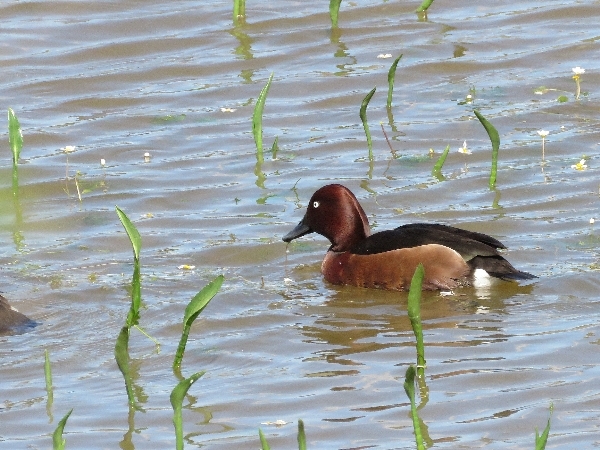 Deep into the marsh we stopped to look for larks and found Calandra and Skylarks but Greater and Lesser short-toed Larks were non-existent so far. More water appeared, the marshes were full to breaking point and thousands of water birds were enjoying it. Glossy Ibis dashed about in groups of twenty to thirty, single Purple |herons were everywhere as were Purple Swamphens, Eurasian Coots, Moorhens, all three Grebes and egrets including Great White. 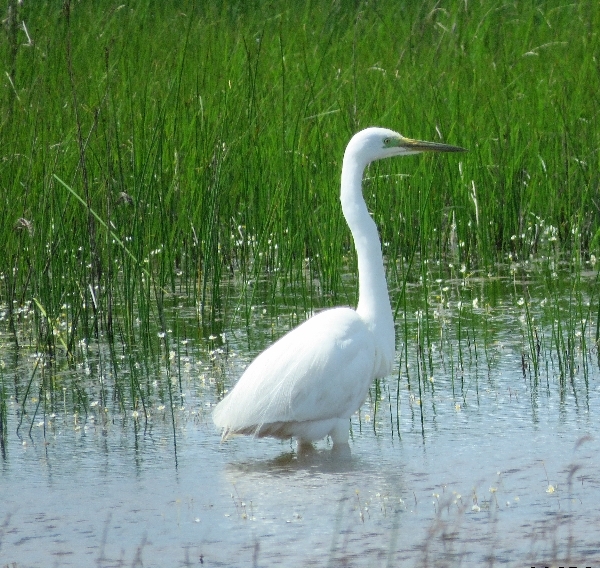 I can’t remember seeing so much water and so many birds, even the lagunas at the Jose Valverde Centre were full. As we arrived at the centre a dozen Eurasian Magpies crossed the track and a Great Reed Warbler screamed out it non-melodic song. Whilst enjoying a coffee and watching a huge number of birds through the plate glass windows of the visitor’s centre at Valverde we found another FERRUGINOUS DUCK, amazing! 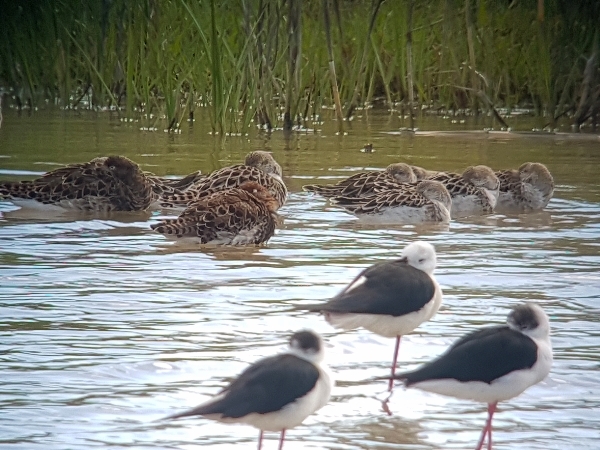 it was siesta time when I took this picture!  Ruff and Black-winged Stilts

A short walk behind ‘blinds’ revealed a few other wading birds, a single Common Snipe, a couple of Black-tailed Godwits and twenty or so of Ruff. We watched another Booted Eagle fly over us as we picked out Pallid Swifts with dozens of Common Swifts.

Further exploration along the tracks in the bus near the Valverde centre revealed several good sightings of Greater Short-toed Larks, a single Collared Pratincole and a few migrant passerines in the shape of Yellow Wagtails, Northern Wheatears, Whinchat and Woodchat Shrike. 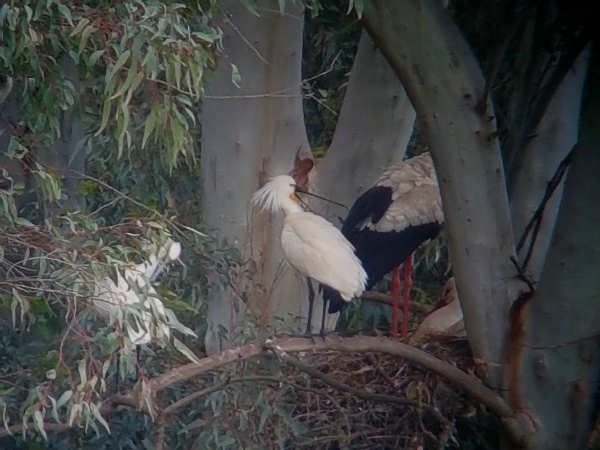 Our return journey out of the marshes was somewhat quicker than when we came in, but we did search for Lesser Short-toed Lark and we did see our first Short-toed Eagle, a distant Montagu’s Harrier, an adult Black Stork and more Corn Buntings than you can shake a stick at!

We got back to El Rocio at 7pm having seen many Iberian Magpies near the town, it was too late to look at the laguna, we showered and came down to a lovely dinner and nice glass of wine, haaaaaaaaaaaaaaaa!