Lovely sunshine all day but a strong breeze hampered our enjoyment and play havoc with scoping and digi-scoping.

After breakfast we set off for Belen Plain arriving in windy, cold, conditions but we could see a clear sky and the sun would soon be up to warm us. As usual larks were everywhere, singing from fenceposts, rocks and up in the air. We had good views of Thekla, Crested and Calandra and also countless Corn Buntings. 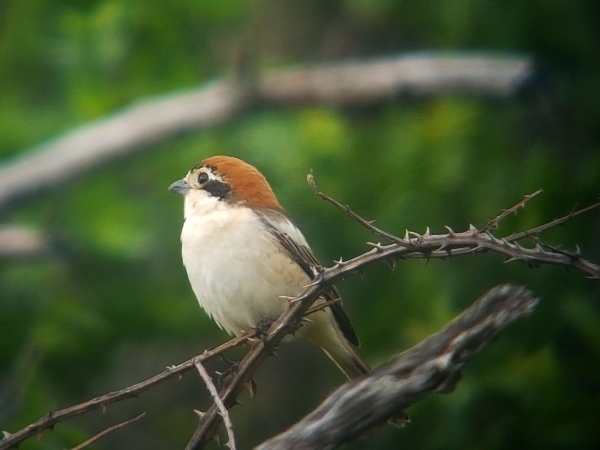 It wasn’t long before we found a GREAT BUSTARD,  a single female was quite close to the road, then a male Monatug’s Harrier drifted across the same field. From another vantage point along a side-track we found a LITTLE BUSTARD, a displaying male, marvellous. This bird would puff out its black and white neck feathers like an Elizabethan Ruff, then make a few short wing flaps before jumping into the air about a foot off the ground.

Another group of GREAT BUSTARDS were found, eight males were all displaying, they looked like distant balls of white linen on sticks. A lot altercation was taking place between them with physical pushing and shoving, there wasn’t a female in sight. We enjoyed this spectacle for a long while forgetting the cold wind as the sun rose in the sky.

More birds went on the list, Iberian Shrike, Whinchat (my first for the year), Woodchat Shrike, European Bee-eater and the usual raptors such as Black Kite, Griffon Vulture (we saw one on a building being mobbed by a Common Raven, the Raven looked tiny besides the huge vulture). 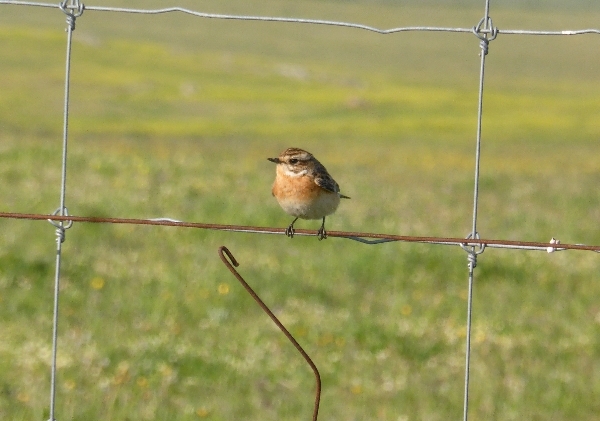 Many hirundines were flying over too, we saw Barn and Red-rumped Swallows, House and Sand Martins and a few Common Swifts. Further along the track we saw Common Kestrel and a pair of Egyptian Geese! The geese are now breeding in the areas and have done for a number of years, nothing but Mallards was seen on a nearby pond.

A second track led us to an area of open scrub and as soon as we got out of the vehicles a pair of Stone Curlews flew up and landed not too far away, we all had good scope views of them. A distant pond held Mallard, Gadwall, Black-winged Stilts and a single Greenshank. We searched for Great-spotted Cuckoo without success but close views of European Bee-eaters and another Whinchat in the morning light was more than compensation.

Mid-morning arrived as we departed, we needed to stop off in Trujillo for picnics supplies and toilets, following that we drove out of town and stopped on an old bridge over the Rio Magasca. Our three target species of Common Kingfisher, Common Nightingale and Cetti’s Warbler were in the bag in no time. Bonus sightings were Western Jackdaw, Booted Eagle, Black Vulture, lots of White Storks and a flock of some 50+ Cattle Egrets flew across the morning sky like a string of white pearls. 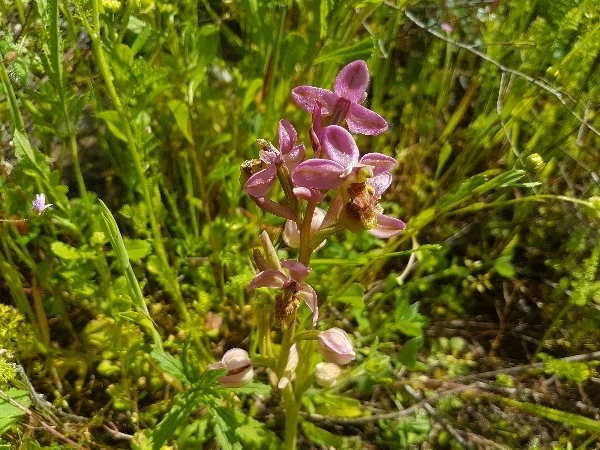 The Llanos de Caseres is a big wide open area of grassland, rocky woodland, Dehesa and a undulating landscape stretching from Trujillo to Caseres and surrounding the villages of Santa Marta de Magasca and Monroy. We made our stop near Santa Marta de Magasca where large fields of short grass and flowers could be viewed. Just before we arrived we saw Common Cuckoo, Iberian Magpie and many Eurasian Magpies.

The whole area was alive with larks, literally hundreds of Calandra Larks, Crested and Thekla Larks were everywhere you looked. We searched for sandgrouse, this area is a favoured spot for two species. It took a while but our search paid off as we found a party of 8 Pintail Sandgrouse and then two more a little further from the group. They looked great in the scope in superb light, but it was hard to keep your scope still in the strong wind and photography was very difficult.

We made a second stop on a wide side-track where we ate our picnic lunch whilst scanning a huge area visible to us. Montagu’s Harriers were very obliging, both male and female drifted near us, but we couldn’t find the Black-bellied Sandgrouse, maybe later.

We travelled along the newly made-up road to Santa Marta and then out on the Caseres road where a nest-box scheme had encouraged the growth of the population of the European Roller. It is still early in the season so we never expected to see many so two birds was enough for us. They posed well for our cameras whilst sitting on rocks near to their chosen nest box. 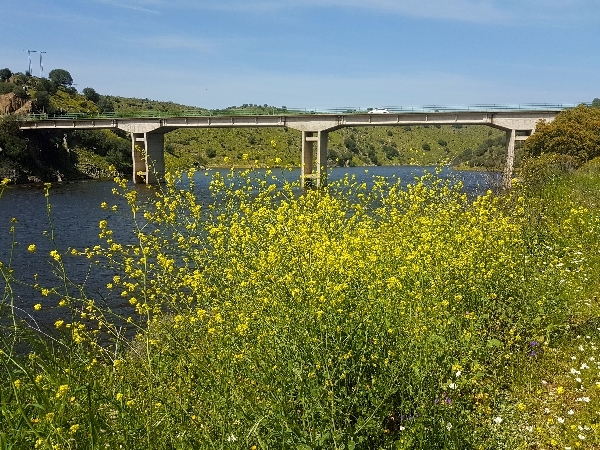 The bridge over Rio Almonte where Alpine Swifts breed

Western Jackdaws, Lesser Kestrels and Spotless Starlings had all taken to the nest boxes too, you can imagine the squabbles that must takes place when the rest of the Rollers return from Africa.

The next couple of hours was spent driving along a bumpy track towards Caseres, we made many stops, the air had warmed and wind eased a little making it a little more pleasant as we disembarked from the vehicles. Highlights during this spell were sightings of Red-legged Partridges, Whinchat, Common Stonechat, a surprising Pied Flycatcher, and Egyptian Vulture. A great find was of a SPANISH IMPERIAL EAGLE, we saw a juvenile bird drifting over the fields giving good scope views.

We made it round to Monroy by 4pm and settled down to coffee or ice-cream or both, the last hour was spent driving back to the ‘Sandgrouse’ fields near Trujillo where again we found Pintails but not Black-bellied Sandgrouse. We found a Common Cuckoo sitting on the ground in a field, which confused us at first then our first Northern Wheatear went onto the list.

It was almost 7pm when we got back to the Finca, not giving us much time to get ready for our ‘drinks and nibbles’ meeting at 7:30pm with the owner of the Finca, Henri.