We saw Coto Doñana at its very best today and in perfect weather!  What a fantastic place, thousand s of birds breeding in a marshland that stretched as far as your eyes could see in all directions. The whole area was lush green enhanced by the vibrant colours from a myriad of wildflowers their appearance due to recent heavy rains that replenished the whole region after a few years of semi-drought conditions. I think my group were totally blown away by the experience.

With breakfast in a bag we set off in the dark around 7am for the drive to Villamanrique and then onto the marshes. It was light by the time we reached the Coredor de Verde, a green corridor designed to separate the agricultural land from the protected national park, is consists of a wide belt of scrubland with the river Guadiamar channelled through it. 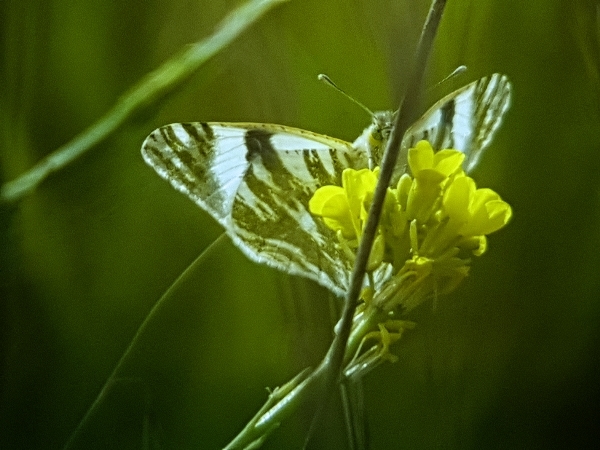 We stopped at a bridge over the river, a good place to look for Wryneck and Penduline Tit, we saw neither, ha! But lots of other birds kept us entertained including a Common Cuckoo called in by Dave using his imitating call. As the group moved on along the track Nigel and I returned to the vehicles to move them forward and a Wryneck called, it then flew right over us and landed near the bridge but out of sight, oops! Better not tell the group!

We ate our breakfast on the side of the track where the bird calls were coming from all directions, the Common Cuckoo, Common Nightingale and Cetti’s Warbler we by far the loudest but we also listened to Greenfinches, Serins, Sardinian Warblers, Zitting Cisticola, Chaffinches and Collared Doves, what a crescendo. 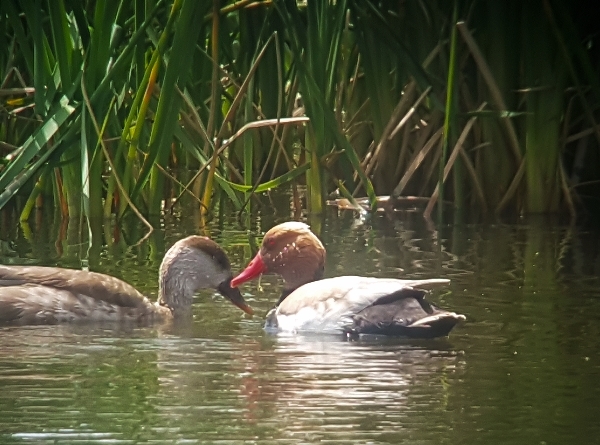 a pair of Red-crested Pochard

Our search for Black-winged Kite went unrewarded and the birds on the laguna de Quema were very few, but we did find a Western Olivaceous Warbler singing from the tamarisk next to the lake.

Following the Coredor de Verde we moved slowly deeper into the marsh towards the boundaries of National Park, we made many stops and had great views of Yellow Wagtail and a superb Hen Harrier flew over the fields to our right.

The very large lake at Dehesa Abajo was full to bursting point, it was also quite quiet except for a sandy island which had a few species on it. Eight Gull-billed Terns, a couple of Avocets, Red-crested Pochards and the star find a Caspian Tern all sat on the sand, we had great scope-views of them in superb light. Other species seen on or around the lake included Great Reed Warbler, Purple Swamphen, Glossy ibis and lots of Greater Flamingos. 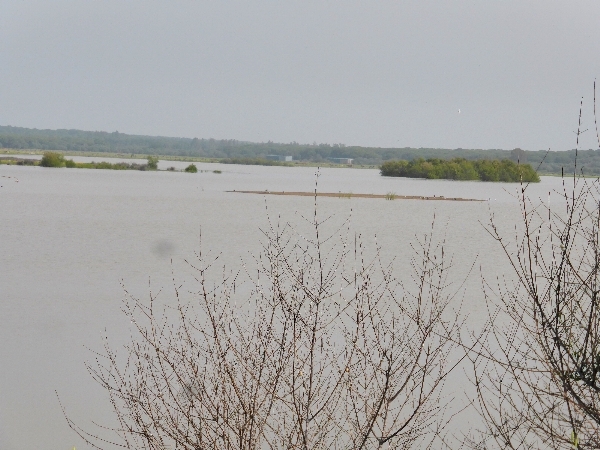 the sand-bar at Dehesa de Abajo

After searching other smaller pools for Ferruginous Duck without success we stopped for a quick cuppa at a venta before driving into the Northern Marshes. We immediately stopped to watch a very confiding European Roller, it had just swallowed a huge grasshopper and was in no fit state to go flying anywhere, so we enjoyed our time with it, click, click. 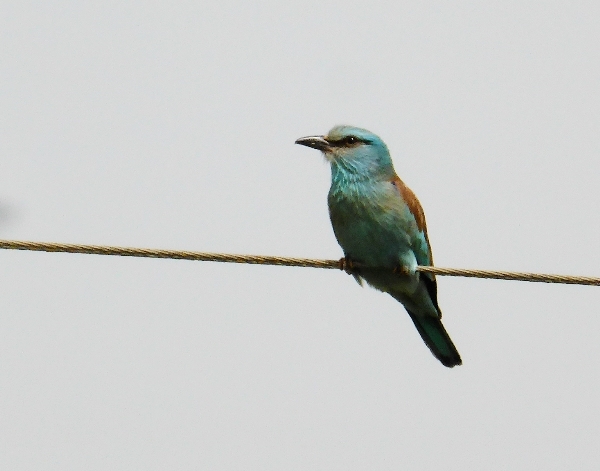 A little further on we stopped to watch our first Great Egret, also a Purple Heron, Marsh Harrier and lots of Cattle and Little Egrets. We stopped to eat our picnic lunch at Casa Bombas (pumping station) found about 10km into the marshes. It was hot and sunny with a nice breeze. Nigel saw a GREAT BITTERN but it disappeared before anyone else got to see it. 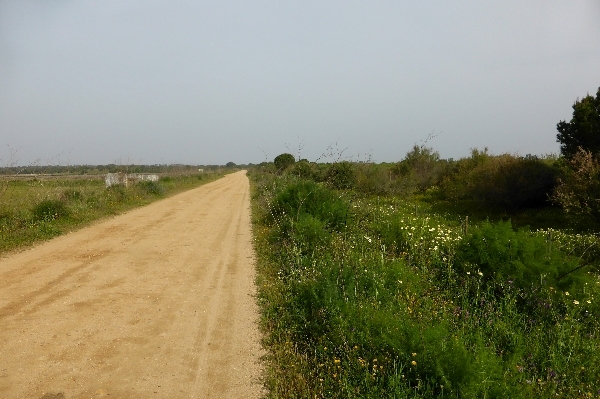 the track along the Coredor de Verde

Lesser Kestrel, European Bee-eaters, Montagu’s Harrier and a distant Black Stork were also added to the ‘lunch-list’.  After our picnic break we drove along wide tracks passing grassland and crop-fields and many ploughed fields. Larks were everywhere, we stopped to watch Calandra, Greater Short-toed and Crested Larks, dozens of Yellow Wagtails (Iberiae) and thousands of the lovely Corn Bunting! A pair of Lesser Short-toed Larks were the star find, they showed very well with male display to the female, although she didn’t look too impressed, been there done that! 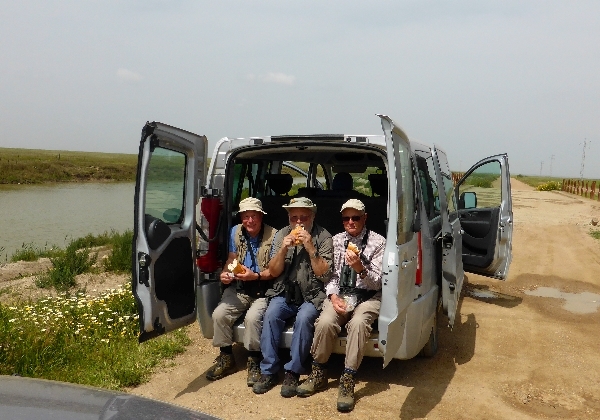 Lunch at the pumping station - Reg, Roy and Dave enjoying a sandwich in the sunshine

Moving on we drove down towards the Jose Valverde Centre passing through many more hectares of cultivated fields before hitting the marshes. Wow!! Suddenly a wildlife explosion occurred, hundreds of birds were flying all over the place, dozens more were on water-filled marshes and open lagoons. It was truly amazing. A heronry, stretch for a quarter of a mile, it contained hundreds if not thousands of breeding birds, Cattle & Little Egrets, Glossy Ibis, Eurasian Spoonbills and Night Herons.

The water held Purple Swamphens, Great Crested, Little and Black-necked Grebes, as well as Red-crested and Common Pochard, Mallards and Gadwall. Gull-billed Terns filled the air and there more Purple Herons in and around the marsh that I have ever seen before.

Over the next two hours we visited the Jose Valverde Centre where our best bird by far was the MARBLED DUCK – two birds were present. Other sightings included Little Bittern, more Great Reed Warblers, White-headed Duck and innumerable other birds. 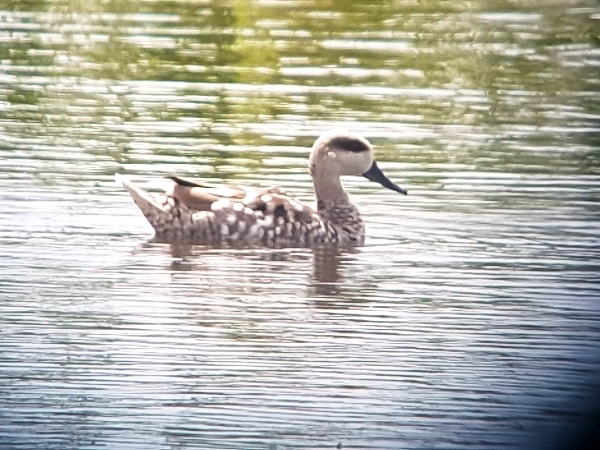 Marbled Duck in the main laguna at the Jose Valverde Centre

Driving along another track from the centre we found large areas of flooded fields with many wading birds as well as herons, egrets and ibis. We found Northern Lapwing, Spotted Redshank, Dunlin, Redshank, Greenshank, Avocet and a host of Whiskered Terns. Close by we also found Collared Pratincole on the ground and more larks on the track. 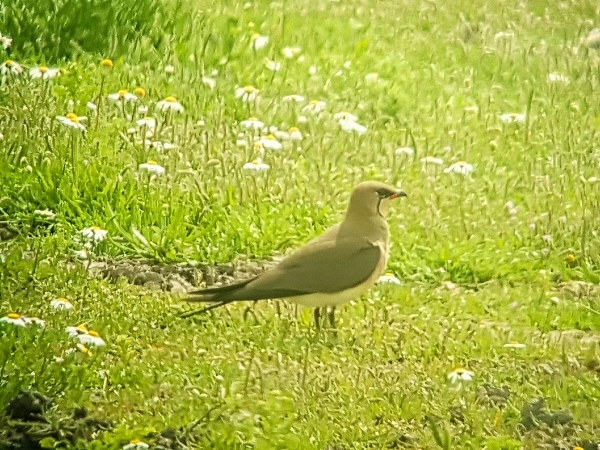 We had to drag ourselves away from this wildlife spectacle but during the return journey we stopped to search the heronry for Squacco Heron which was missing from list, we found a few pairs in full breeding plumage, with the blue bill and bright orange plumage, fantastic.

We arrived back at the hotel semi-exhausted but very pleased with our day out in the famous Coto Doñana Marshes.