Yet another busy day, we started with rain but is stopped by 9am and the sky cleared, heavy thunderstorms in the night left more puddles, the great duck-weather continues!!

We went to the seaside today leaving the hotel at 8:45am we drove straight down to the coastal resort of Matalascañas where we stood on the cliffs looking out over a misty Atlantic Ocean. Not much was passing but a flock of some 30-40 Bar-tailed Godwits were nice to see and a trickle of Sandwich Terns with both Yellow-legged and Lesser Black-backed Gulls also kept us busy. Then a group of 5 Slender-billed Gulls drifted past whilst Roy found a distant Skua that no one else could get onto. 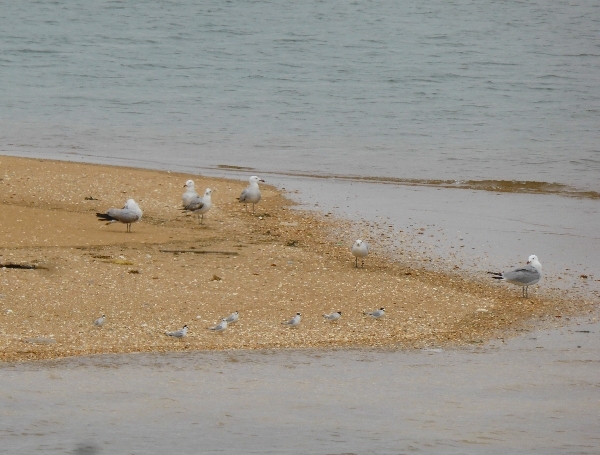 The coast road to Huelva was very quiet and we soon arrived at the entrance to the O’Diel Marshes, which has the protection of being a Park Natural. The salt-pans near the entrance held good numbers of waders at this high-tide period. Hundreds of Curlew Sandpipers were joined by Dunlin, a few Little Stints, Redshank, Greenshank, Pied Avocets and Black-winged Stilts. The usual suspects were also noted Greater Flamingos, Common Shelduck, Eurasian Spoonbills and the common ducks.

At the visitor’s centre a jetty had a few Whimbrel and Sandwich Terns sitting on the hand-rails but the high water covered all the mud on the shoreline of the Rio O’Diel so no waders were present. 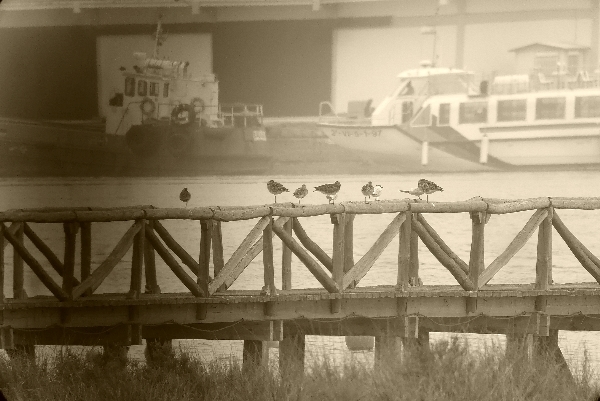 Whimbrels and Sandwich Terns on the jetty - don't ask me why this picture is coloured the way it is! Wrong settings?

Further into the marsh we found a huge area of exposed mud where 5-600 birds were feeding, 90% of them were Great Ringed Plovers, but we also found Grey Plover, Whimbrel, Little Stint and Dunlin.

Good close views of a male Montagu’s Harrier were enjoyed as we continued our birding trek in the bus. The re-introduced Ospreys are doing well on this site with three/four active nest sites, we saw two or three birds with one of them carrying a large stick for nesting material.

A sand-bar along the banks of the O’Diel held a number of gulls and to our great delight several Audouin’s Gulls were present, a superb adult bird posed well for our cameras. Sandwich Terns were also present and Little Terns flew over us. 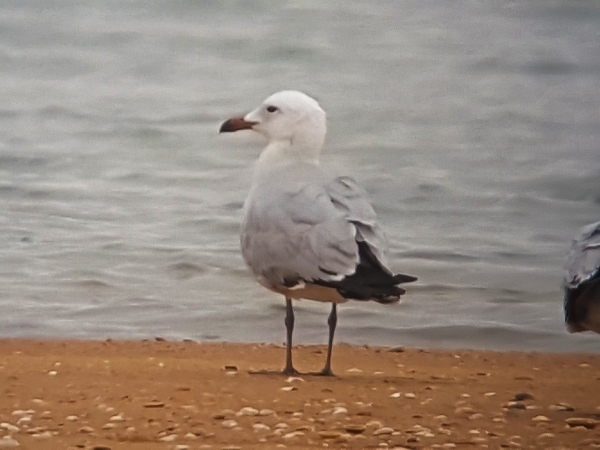 Unfortunately, due to repair work on the sea-defence wall we were not allowed to go much further along the causeway so we parked up and walked across the dunes to the beach. It was quite productive on the beach, we saw Sanderling, Kentish Plover and Dunlin. But out at sea many terns and gulls we milling about. A large group of mixed gulls and terns we feeding in one spot where a shoal of fish were obviously feeding.

Whilst watching the feeding flock, three Black Terns flew in and joined them, a wonderful sighting. We also listed a few Northern Gannets but not much else. 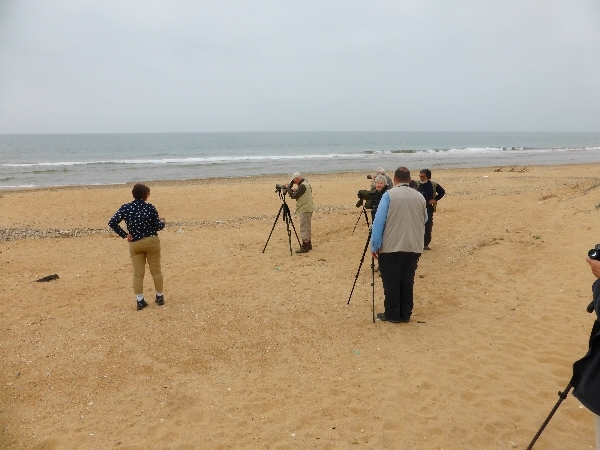 On the beach at the O'Diel Natural Park

We left the marsh and after buying lunch at a supermarket we drove to the Laguna at El Portil which was practically devoid of birds. We ate our picnic in nice sunshine in the pine woods around the laguna before moving on to the Rio Piedras at El Rompido.

A fish farm next to the river was not as good as previous visits but we did find Common Sandpiper, lots of Dunlin and Ringed Plovers. The river itself proved quite good as the receding tide exposed muddy shorelines. A group of waders fed very close to us, Sanderling changing colour from grey and white into brown and orange were nice to see and close views of Kentish Plover were excellent. 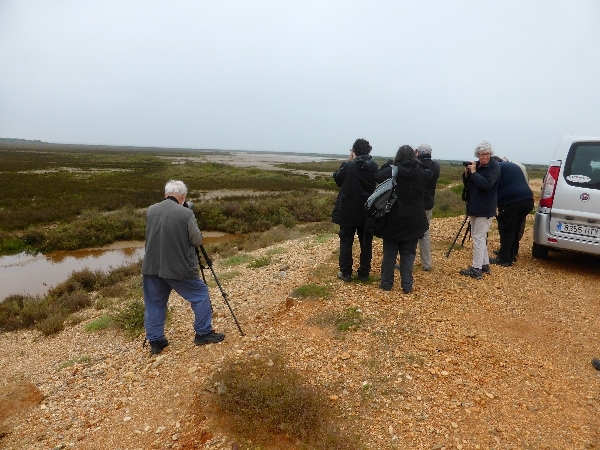 Leaving the marsh and the heath we stopped to look for the Iberian Green Woodpecker which, after some patience, showed really well for us. We also noted Eurasian Hoopoe, Common Waxbill, Sardinian Warbler and Serin.

The group then forced me to stop for an ice-cream before driving back to El Rocio, arriving at 6pm in good time for a cold beer, a shower and then dinner, how civilised?