Horrendous thunderstorms and heavy rain flooded the streets at El Rocio overnight, it was dull and overcast as we got up and went down for breakfast, not the best start to our day.

We were all packed and ready to by 8:30am – we said goodbye to the staff at Pension Cristina and set off for Malaga – but first we had some birding business at La Rocina. A number of species were missing from our list and we intended to look for them. After a few minutes in the bus we arrived at the ‘ancient’ woodland adjacent to the Palicio de Acebron, built in 1964 as a Royal Hunting lodge it is now a hunting museum (just as bad?).

We started the walk from the car in perfect conditions, the sky had brightened, there wasn’t a whiff of air and no back-ground noise from the roads. All we could hear was bird-song, Common Nightingales, Chaffinches, Serins, Cetti’s Warbler, Iberian Chiffchaff and Short-toed Treecreeper. We soon located some of these species.

At the first boardwalk across the boggy stream we were confronted by red tape and sign saying that the boardwalk was unsafe – we took a look and sure enough it had collapsed mid-stream. What a shame they didn’t pre-warn us at the start of the walk! More bird songs alerted us to the presence of Melodious Warbler, Turtle Dove (distant), we also heard and saw a Great Spotted Woodpecker and found another Treecreeper.

We returned to the car park and took the main track to the Hunting lodge. New birds were hard to come by but a pair of  Crested Tits showed really well before we reached the lake near the Lodge. From a viewing platform we found a small number of Night Herons roosting in the bushes over the water’s edge and an Iberian Chiffchaff came to sing from a bush immediately behind us, we all had a good look at this species.

The best sighting was of a LESSER SPOTTED WOODPECKER this bird, a female, sat in the same bush for a while and then it flew across the lake to a dead tree where is sat for a good 5 minutes before flying off. In-scope-views of this much sought-after species was a dream for my group of UK birders. We left the area around 10:30 and set off for Sevilla en-route to Malaga. 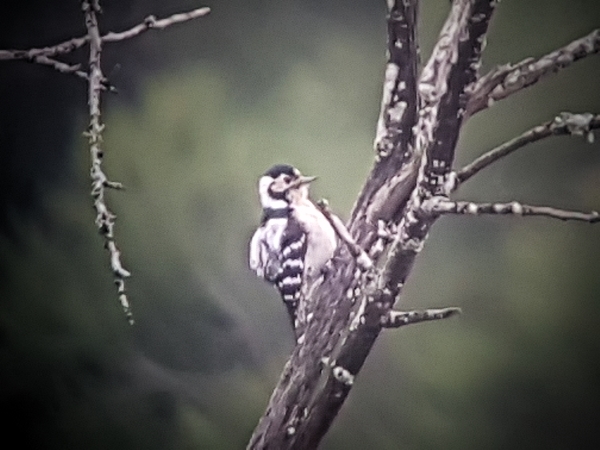 A poor shot of the Lesser Spotted Woodpecker

Our coffee stop at 11:30 was taken just outside of Sevilla we then drove for 90km to Sanlucar de Barrameda where we stopped to buy lunch. A short drive to Bonanza found us at a series of pools in an agricultural area. We watched some very close White-headed Ducks as we sat on a sandy bank eating our picnic.

Over the next hour we watched Little Bittern, Western Purple Swamphen, Red-crested and Common Pochard, Reed Warblers and lots of White-headed Ducks including a family party with 3 chicks. Moving to another pool not far away we found our main target species: RED-KNOBBED COOT, it was a little far away and it was a female or young male so the Red-knobs were not like tomatoes, more like red currants. However, the bird stayed in view preening for a good ten minutes before disappearing, another great bird in the bag!  We also saw another Little Bittern, Night Heron and several other species before we left. 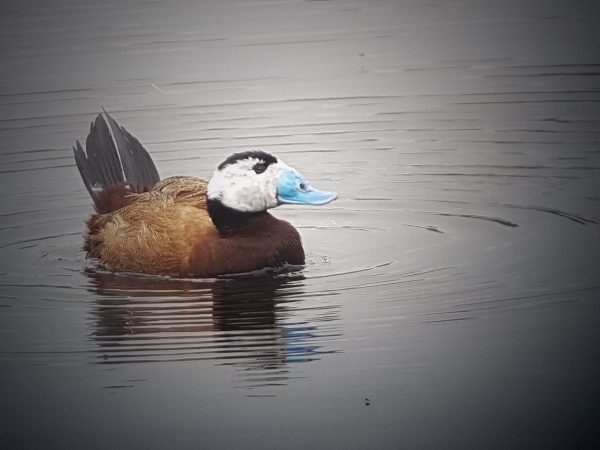 The White-headed Duck - male above, female below 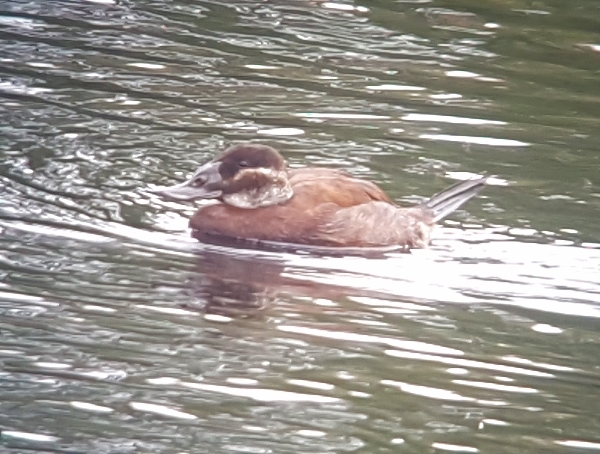 The Bonanza Salt Pans are incorporated into the Doñana Natural Park and so are open to the public and you are free to roam. After the heavy rain of last night the tracks were extremely muddy but that didn’t matter as we found our target bird along the entrance track. A flock of some 20+ SLENDER-BILLED GULLS were feeding by the roadside, we had excellent view of them and could see the ‘pink’ hue on their breast feathers, this is acquired after eating brine shrimps, just like flamingos. Unfortunately, someone slammed a car door and off they went.

Scoping more birds from the same spot we found a flock of Bar-tailed Godwits, Grey Plover in summer plumage, Curlew Sandpipers likewise, also Kentish Plover, Dunlin, Pied Avocet, Whimbrel, Greater Flamingos and a Yellow Wagtail. It is a pity we couldn’t explore the ‘pans’more thoroughly but time was pressing and the target bird was already found. 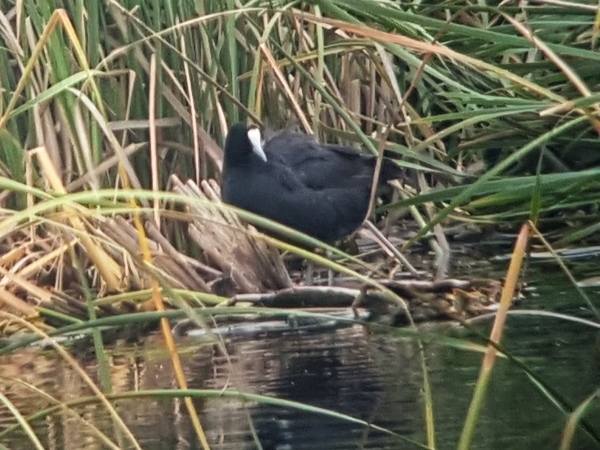 A record of the Red-knobbed Coot

It took 20 minutes to drive across to the sea-front at Chipiona, we visited the marina where a colony of LITTLE SWIFTS have bred for a number of years. In bright warm sunshine we enjoyed watching these rare breeding birds from Africa, we walked below their nests getting occasional great views of the birds. Before we left we noted a flock of Ruddy Turnstones on a jetty with many Yellow-legged Gulls and a few Lesser Black-backed.

It was now approaching 4pm and we still had to drive to Malaga, so off we went, passing Jerez, Algeciras, Gibraltar, Estepona, Marbella and Torremolinos and arriving at 6:20pm, it had been a hard drive as the costal A7 road was very busy at times.

A relaxed group enjoyed their last dinner together at 8pm, we discussed the tour and each nominated their favourite sighting as bird of the trip. Great & Little Bustards seemed to top the list, with Roller, White-headed Duck and Lesser-spotted Woodpecker all given a mention. Our trip total was really good considering the poor migration and the wet weather, our count stood at 179 with another 5 species heard but not seen.