Our 'rarity' finding week continued today as we found the HOODED CROW on GIBRALTAR and a PECTORAL SANDPIPER at La Janda, what another great day in sunny Spain!

WEATHER: cloudy over Gibraltar with a brisk easterly wind that increased during the day. Sunny later but the wind made birding very difficult at La Janda.

An early breakfast and an early start saw us arriving at Gibraltar at 8:45am, the traffic on Gib was particularly bad so we went straight to Jew's Gate, arriving just after 9am. Our two hours spent there were most enjoyable, Ray Marsh, the lead Ringer, was very informative and the ringing demonstration was excellent. The group all saw a number of species being processed; Blackcaps, Garden Warblers, Common Redstart, Sardinian & Subalpine Warblers, Common Chiffchaff, Blackbird amd Greenfinch. 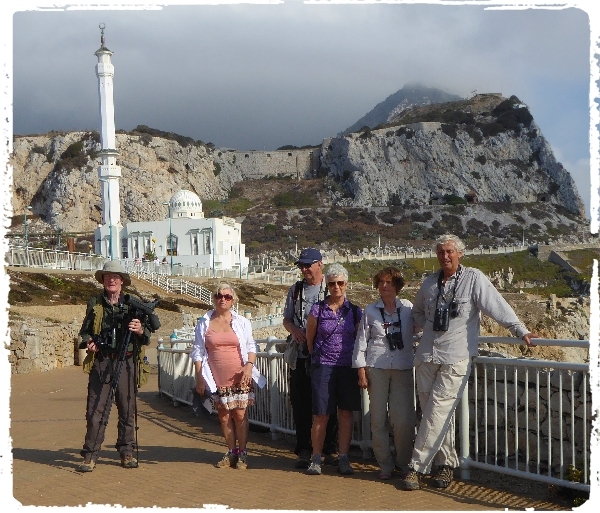 My group at Europa Point, Gibraltar with the cloudy 'Rock' behind them

At 11am we thanked Ray and his helpers and made our way down to Europa Point where had a quick coffee-stop and a short sea-watch. Dozens of Cory's Shearwaters sat on the water or followed the pods of feeding Common Dolphins, we also saw Northern Gannet and Yellow-legged Gull. Overhead we noticed a steady stream of Booted Eagles and one or two Sparrowhawks. The local celebrity, a HOODED CROW, put in appearance too!

We left Gibraltar at 12:30 and drove up through Algeciras heading towards Tarifa, many raptors could be seen in the cloudy sky as we started the climb out of Algeciras, so we decided to stop at Algarrobo raptor watch point. What a great decision that was! The sky was full of migrating birds! Dozens of Booted Eagles & Short-toed Eagles came from all easterly angles heading westward towards Tarifa often climbing out of sight into the clouds. 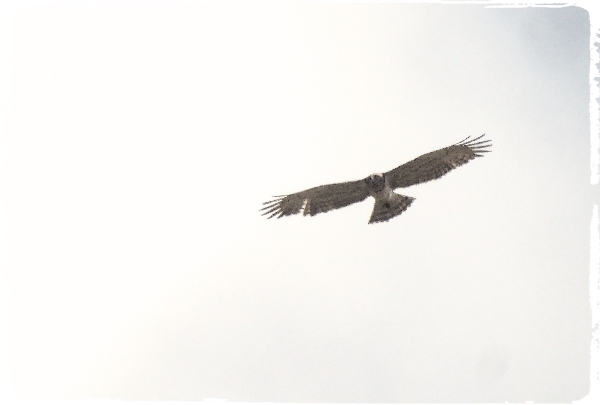 A huge flock of White Storks 'roamed' back and forth across the sky, they couldn't get enough lift to rise over the hills so they stayed around Algeciras Bay. We ate our picnic lunch enjoying this superb migration spectacle. Apart from the two common eagle species we also saw many Eurasian Sparrowhawks, Black Stork (3), Honey Buzzard (3), Black Kite (7), Common Raven (3), Common Buzzard (3), Griffon Vulture (dozens) and Egyptian Vulture (6). Hundreds of Barns Swallows passed by in swarms joined by Red-rumped Swallows, Sand & House Martins. 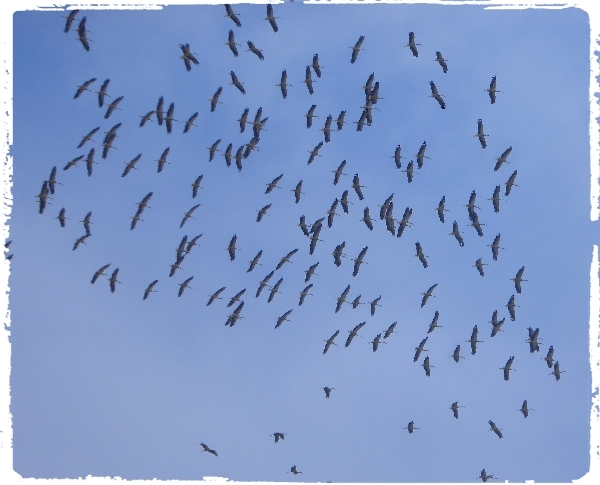 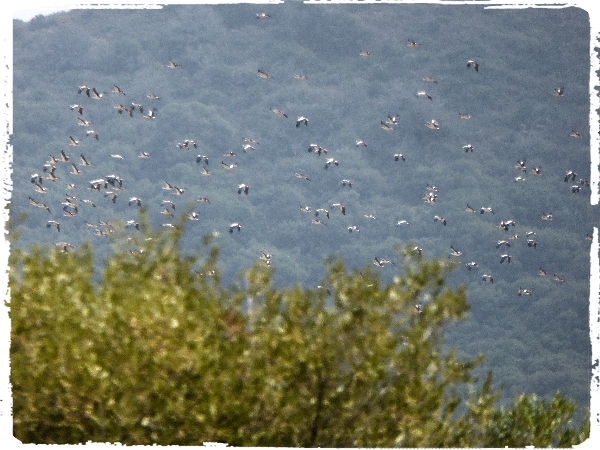 Well the day so far had been fantastic, we had had some superb bird-watching experiences, could it get better? Well yes it could! 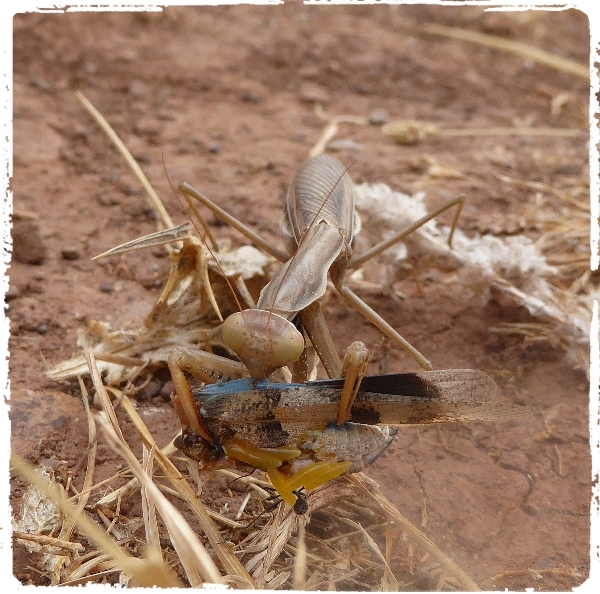 A Preying Mantis devouring a Blue-winged Grasshopper! A number of ants attacked the Mantis and stole the grasshopper, it was amazing to watch! 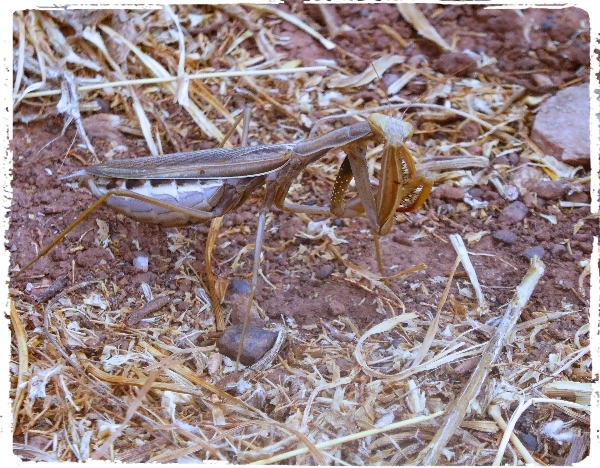 the Mantis walking off disconsolately, bereft of its lunch

We drove to La Janda arriving at 3pm, it was very windy so much of our birding was done from the bus. We noted several species along the central track, Zitting Cisticola, Common Stonechat, Corn Bunting and huge flocks of Goldfinches, Linnets and Sparrows.

An area of open water in the rice fields held the usual high numbers of Little Egrets and Glossy Ibis. They were joined by over 50 Common Snipe, Northern Lapwing (6 - the first arrivals this autumn), there was also a couple of Common Redshanks, Green Sandpipers, Little Ringed Plovers and Yellow Wagtails.

We then found our bird of the week!! A single PECTORAL SANDPIPER, smaller than than the Wood Sandpiper that it appeared to be associating with, showed very well about 30 meters from us. Patrick called it first and a quick check proved he was correct. Amazingly we were the only birders in sight no-one else around to share our find! Despite the close porximty of the bird it was extremely hard to photograph, the windy conditions and the position of the sun were all bad. 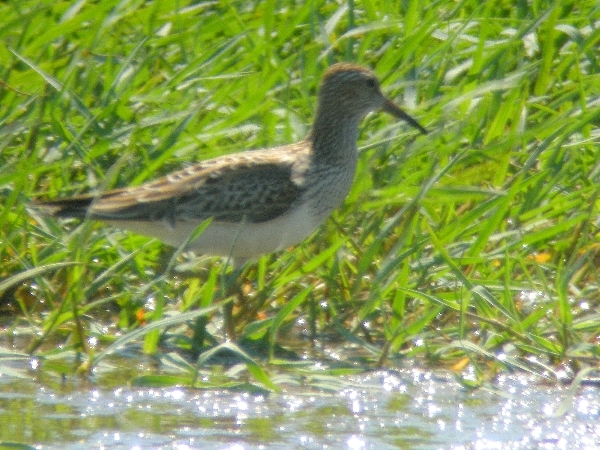 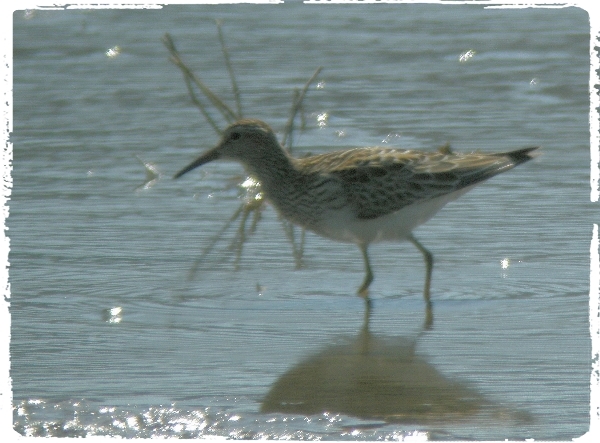 All around us many marsh Harriers struggled across the rice fields fighting the windy conditions, hundreds of Cattle Egrets followed a tractor, huge flocks of Wood Pigeons, Jackdaws and Finches dashed about whilst White Storks were all over the area in high numbers.

We dragged ourselves away from the Sandpiper and contiued along the central track turning off towards Benalup. We searched for roosting Red-necked Nightjars without success but added  Red-legged Partridge, Common Kestrel, Common Pheasant and a superb BLACK-WINGED KITE to our list. 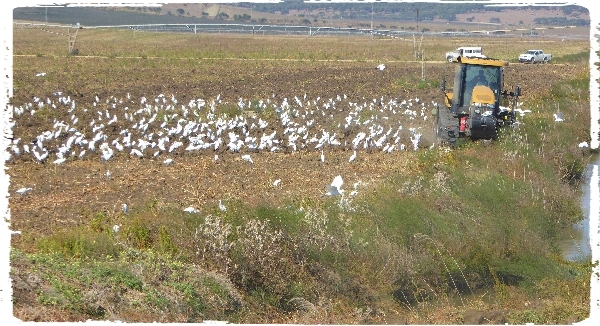 Cattle Egrets and the plough

We retraced our steps passing along the central track, a quick second look at the PECTORAL SANDPIPER was made and a stop to look at 7-8 Lesser Kestrels feeding over the recently cropped fields was our last birding of the day.

It was now 5pm and we were 1 1/2 hours from home, but that didn't stop us taking another resfreshment break before setting off. We arrived back in Gaucin at 7:15pm. A superb fish dinner was served up by Dawn at 8, delicious!