ENCINAS BORRACHAS TRACK – LAGUNA FUENTE DE PIEDRA We had a terrific morning in glorious sunshine and very warm temperatures, the light was simply fantastic, so clear, everything looked so vibrant and colourful.

It wasn’t just the bird life that made our morning walk so wonderful but also the stunning array of wild flowers, the sheer number of butterflies and the breath-taking scenery.

We arrived a little after 9am, having stopped to watch Rock Buntings on a roadside wall. It was already 20C but a nice breeze made it feel cooler, I love this walk it is one of my all-time favourites. A number habitats combine to give an overall diverse environment supporting a collection of birds that would be difficult to find elsewhere in such a small area. You have high limestone cliff faces and mountain peaks, sloping rocky scree, open grassland, open bushy scrub, ponds, heathland, cork woods and banks of wild flowers.

We were amazed at the number of butterflies on the wing and it just got better as the air warmed up, last week I was complaining about the lack of butterflies, I’m not now. We quickly identified; Clouded Yellow, Pale Clouded Yellow, Meadow Brown, Sage Skipper, Marbled White, Spanish Gatekeeper, Brown Argus and Small Copper. 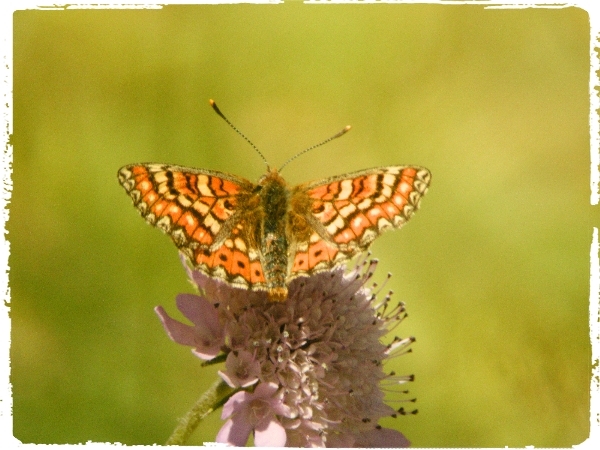 Our first scan for birds was a little unsuccessful, Corn Bunting, Stonechat and Goldfinch. But as we moved along the track more began to appear. First we found Rock Sparrow then a Black Redstart, both were very high up on the cliffs. Next we found Spanish Ibex sitting up there and a great find was a male COMMON ROCK THRUSH. This bird was singing and displaying, performing very well for us. 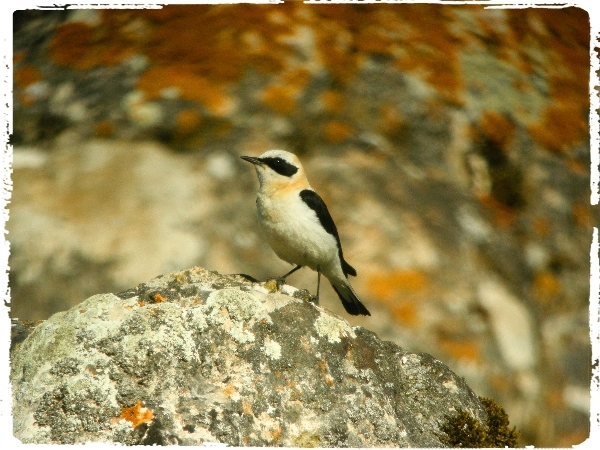 Next a Black-eared Wheatear sang close by giving great views, Thekla Lark followed and we found Iberian Shrike, the first one seen here for a while, I thought that they may have left. A Black Wheatear was next on the list, it too performed song-flights for us. We then found Red Deer on the peaks and a small pond full of tiny, baby Natterjack Toads. 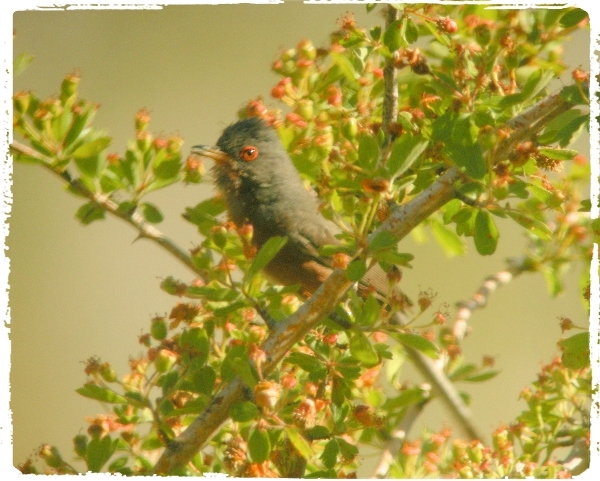 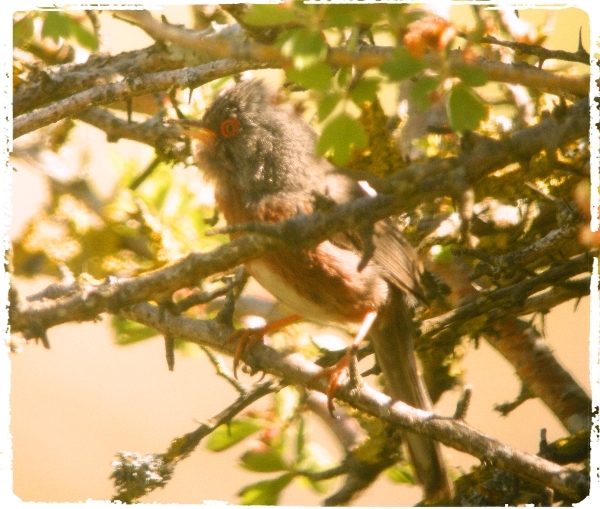 A Dartford Warbler find was of an amazingly showy male, perched within a few meters and singing to us, the same happened with a Woodlark. More butterflies were found; The Hermit, Grayling, Scarce Swallowtail, Spanish Fritllary and Knapweed Fritillary. 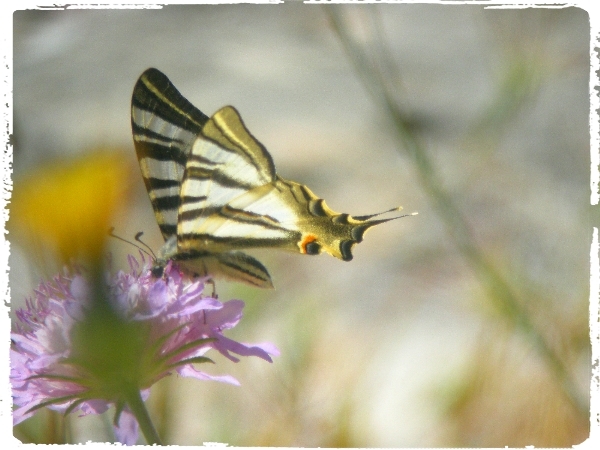 As we entered the cork woods we heard Orphean Warbler but couldn’t locate it, we had better luck with Subalpine Warbler and a number of Bonelli’s Warblers. Two Hawfinches flew over us and a Common Cuckoo called from way down the valley. 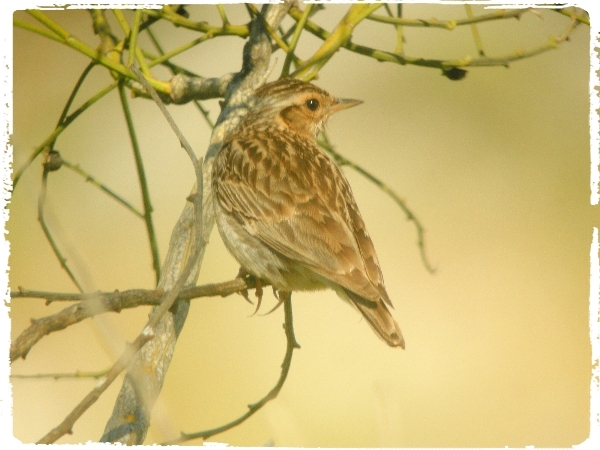 Our return journey was equally as good, we found an Orphean Warbler in the open scrub, a beautiful male singing, a Spectacled Warbler briefly perched in the same bush. We scoped Blue Rock Thrush, Common Kestrel and several Griffon Vultures.

A little hot and mildly exhausted we sat by the car and ate our lunch, we had been on our feet for nearly four hours.  A couple more butterflies went on the list with Dusky Heath and Silver-studded Blue.

For the afternoon we drove to Fuente de Piedra, we knew that this huge lagoon was virtually dry but a couple of pools near the visitor’s centre still held some water. The shallow pool along the entranceway was almost gone, but it still held lots of Avocets, Black-winged Stilts, Black-headed Gulls a few Gull-billed Terns and a single Northern Lapwing. Two other bonus birds apoeared whilst we were there, first a couple Whiskered Tern came un and fed over the water and a great surprise was a WATER RAIL, it walked right across the road heading away from the pool into some thick scrub, amazing! 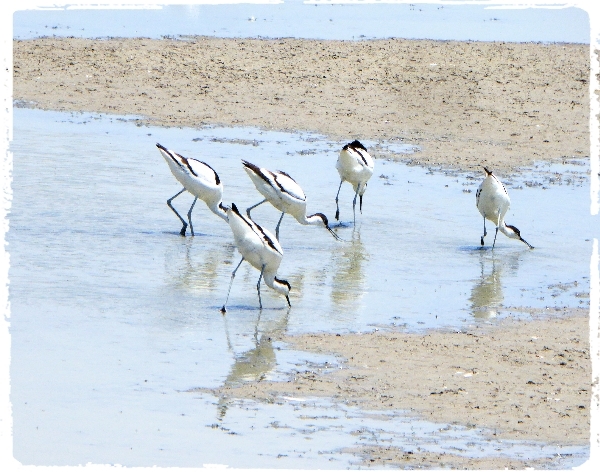 Bottoms-up!  Pied Avocets feeding in the last remnants of a pool

The pool behind the centre was still good and still full of birds, we added 10 or more species to our list including; White-headed Duck, Black-necked Grebe, Red-crested Pochard and several other species. The huge lagoon itself held about 1000 Greater Flamingos, they stood or fed, closely packed together in an ankle deep pool on one side, a sorry site as none of these birds would breed this year. 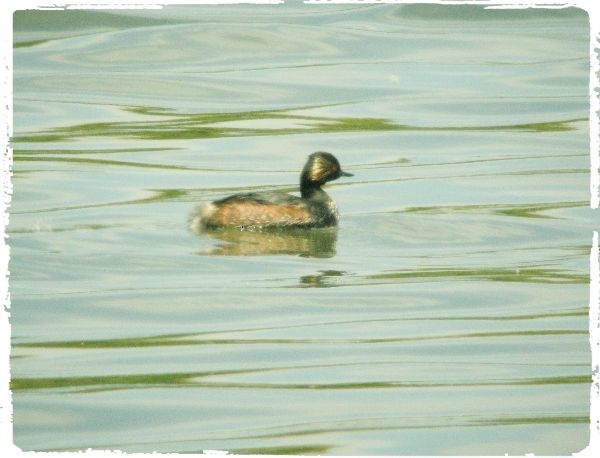 We finished our visit around 4pm and headed off back to Gaucin, the top temperature was 31C, I think summer has finally arrived.