Today Barbara and I went out birding for most of the morning at local rivers we stopped at the Rio Genal first of all, it was quiet and not so windy to start with. We sat by the car and scanned the river and nearby trees and scrub finding just a few species. Gey and White Wagtails were seen along the river and we heard Cetti’s Warbler. In the scrub we saw Long-tailed Tit, Blue Tit, Chaffinch and Serin and in the fields on the way back to the road we found Linnets and Goldfinches.

The Rio Guadiaro wasn’t much better, we did see some Bee-eaters along the way as well as lots of Stonechats, Corn Buntings, Greenfinches and a few Sardinian Warblers. At the river we saw Grey Heron, Little Egret, Green and Common Sandpiper and a few Barn Swallows. The only raptors in sight were Griffon Vultures and a Booted Eagle.

At 11am we set off for Malaga to collect Paul Edlin who is staying with us for 3 nights and together with Tony Grady will make my group for this mini-break. Once we had collected Paul we drove round to the local reserve at the Desembocadura de Guadalhorce, the sun was shining but it was really quite windy. A few Monk Parakeets flew noisily over us as we approached the hide overlooking the Laguna Grande.

The number of birds in or around the laguna was much reduced that those of late, just a few Lesser Black-backed Gulls, a single Yellow-legged Gull and two Black-headed Gulls. We saw ad ozen or of wader species, starting from small to large we saw Little Stint, Kentish Plover, Little Ringed and Greater Ringed Plover, Dunlin, Sanderling, Common Sandpiper, Green Sandpiper, Redshank, Greenshank, Avocet and Black-winged Stilt. One nice surprise wasthat of a Bar-tailed Godwit, we also saw Common Shelduck, Little Grebe, Cormorant and Grey Herons. 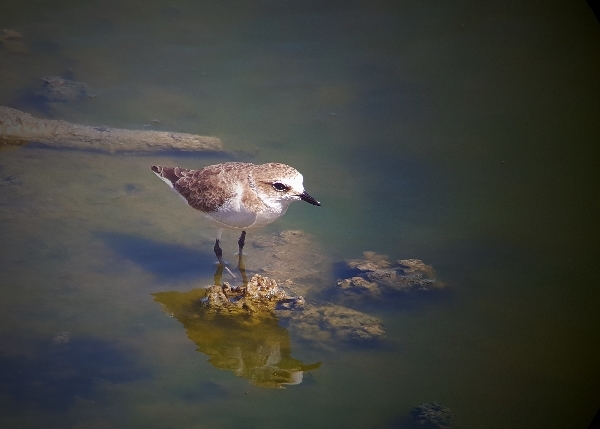 At the smaller laguna Escondida we found a small number of ducks and more grebes. Northern Shoveler, Gadwall, Common Pochard, White-headed Duck and Mallard joined Common Coot, Common Moorhen and more Little Grebes out on the water whilst a Kingfisher sat in the bushes trying to get out of the wind.

We left the area around 4pm and drove along the coast road towards Gibraltar stopping at Estepona Golf Complex to look for some migrant birds in the scrub and along the fair-ways. We quickly found both Spotted and Pied Flycatcher, Common Redstart and a group of 5 White Wagtails with a single Common Sandpiper at the pool.

Paul photographed a couple of dragonflies before we set off for Gaucin, on the way off the golfing complex we found a party of 5 Eurasian Hoopoes, a couple of Yellow Wagtails and another Common Redstart, all these birds flew off as a Sparrowhawk swooped down after one of them but it missed the lot.

More Griffon Vultures were seen as we passed through Casares but not much else of interest was seen. We all sat down to eat a lovely meal of fish cooked by Dawn followed by figs in honey, cinnamon, walnuts and vanilla mascarpone.