WEATHER: another perfect day, sometimes a little too hot, but a nice breeze throughout. Average temp 25C

We took a change of scenery today by visiting several bodies of water and the ‘flooded’ rice fields around Madrigalejo, but even before breakfast we enjoyed a lovely early morning walk along the tracks of Finca Santa Marta. We met at 7am and took the track from the car park down past the paddocks and olive plantations. It was a lovely hour and although we did not see too many species we really enjoyed the ambiance. Hoopoes called all the time we were out, we also heard Golden Orioles, Common Nightingale, Sardinian Warbler, Corn Bunting and a Wren right by the car park. We had great views of the Nightingale, Hoopoe and fleeting views of the Sardinian Warbler. 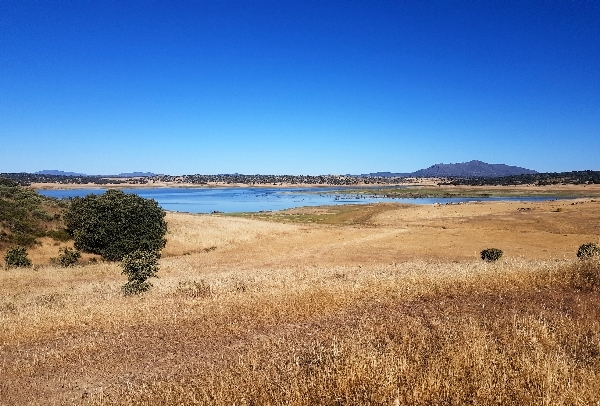 Our first port of call after breakfast was the huge reservoir at Alcollorin (shown above), it is such a picturesque site, we stood a on a hillside and ‘scoped the water which was at quite a low level. It was covered in birds, we picked out Eurasian Spoonbills, Great, Little and Cattle Egrets, Purple and Grey Herons. Many Great Crested Grebes and hundreds of Mallard with a lot fewer Gadwall. A pair of Egyptian Geese was a surprise for the group, they now breed in several places in Extremadura (the geese not the group). One of the group saw an Otter and we added Northern Lapwing, Little Ringed Plover, Black-headed Gull and Little Grebe to the list.

The scrub and dehesa surrounding the lake held warblers and shrikes, finches and sparrows, we spent some time waiting for an Orphean Warbler to show whilst watching Iberian and Woodchat Shrikes. Further around the reservoir a second., much smaller dam holds back a much small body of water, this is the nature reserve part. It too was covered in birds, an Egret colony with hundreds of Cattle Egrets, also a nest pair of Marsh Harriers, more Egyptian Geese and Herons. Birds in the scrub below the dam provided some entertainment for us, we watched Great Reed Warbler, Cetti’s Warbler, Common Stonechats, Sardinian Warbler, Linnets, Goldfinches, Greenfinches and White Wagtails. 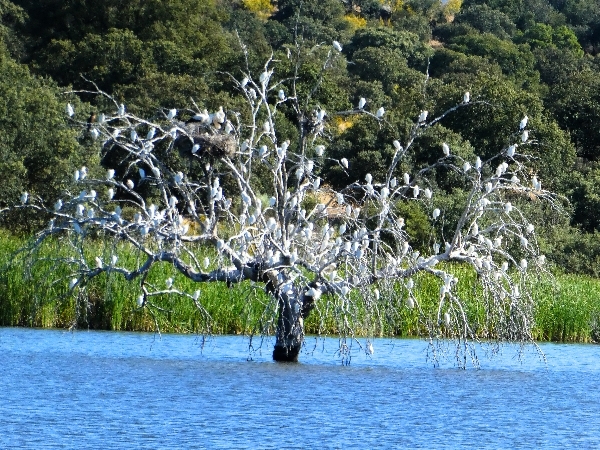 The egret tree, covered in Cattle Egret with a couple of White Strok nests and Great Cormorants

We circumnavigated this lake on a track in the bus, stopping several times to watch birds and interesting butterflies, a huge colony of Spanish Sparrows was making such a racket, many of the hundreds of pairs were feeding their young fledglings.
From there we visited the even large reservoir called Sierra Brava, we walked along the dam before sitting at a picnic table to eat our picnic lunch, a Little Owl sat out nicely on a fence near the dam. It was beautiful there too. We saw very distant Gull-billed Terns and not much else. The sky was always full of Black Kites, Griffon Vultures, Common Buzzards, Common Kestrels and Jackdaws.

We spent two hours at the rice fields near Madrigalejo and our first species seen on the now-flooded rice fields were Collared Pratincoles, we were lucky enough to get very close to one or two of them, taking pictures fro the bus. There must have been a dozen or so in the area, what a beautiful species. For the next hour it was tough going because of the heat, the cooling wind seemed to have dropped and it became a little uncomfortable. 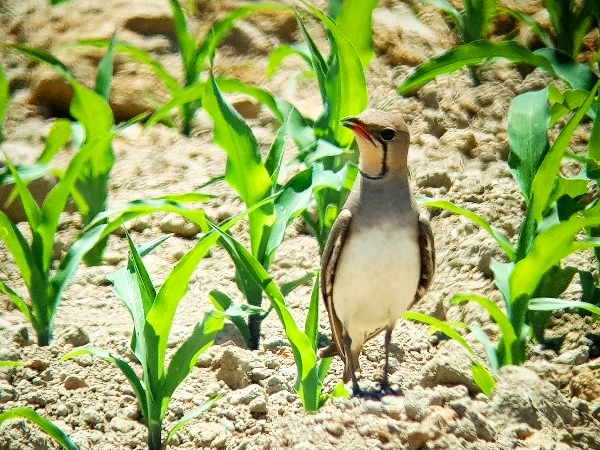 Collared Pratincole seen at the rice fields (although photgraphed in maize)

We soldiered on, taking plenty of water on board. Our target species of Melodious Warbler, Tree Sparrow were soon on the list but Turtle Dove remained elusive. We saw Golden Oriole, lots of Iberian Magpies, Bee-eaters, Hoopoes and a nice surprise was a Hawfinch. Walking back along the rice fields we added Zitting Cisticola (lots of them), Reed Warbler and The exotic escapee, Common Waxbill. We then drove along more tracks around even more flooded rice fields where we added Common Ringed Plover and not much else. 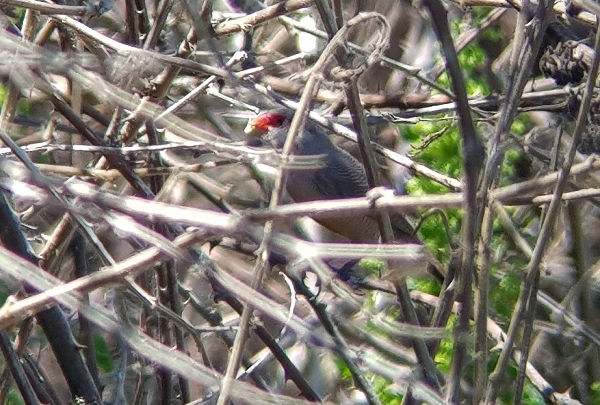 Our last birding place for the afternoon the was large reservoir at La Moheda, the Common Crane reserve near Obando, but not before a coffee stop in the village. We climbed a man-made bank to view the reservoir in perfect afternoon light and although it was still hot at 4pm a nice breeze kept us cool. As usual there were many species out on the islands and along the shoreline of reservoir. It was nice to see Black-winged Stilts, Pied Avocet and Little Ringed Plovers all with chicks, we also saw a couple of Dunlin and a single female Kentish Plover. A flock of 9 Eurasian Spoonbills, a couple of Grey Herons, a single Purple Heron, a few Mallard and yet another pair of Egyptian Geese were seen. 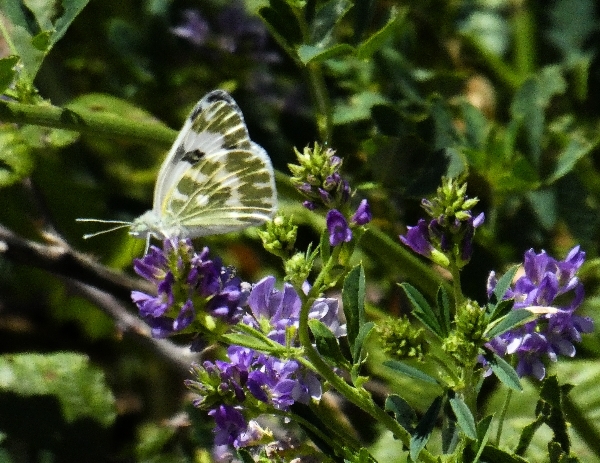 It was 6pm when arrived back at the Finca, tonight we were eating out in a restaurant in the Plaza Major in the centre of Trujillo. After completing our bird-log we jumped onto the bus and drove into the centre of town. It was magical there, we sat outside on a high terrace overlooking the main square and sky was full of Common Swifts, Lesser Kestrels, White Storks, Jackdaws and Starlings. Later much larger groups of Spotless Starlings flew over to roost in the palm trees that line the streets in the town.

After our lovely meal we left the plaza just as it was getting dark, we made a short diversion to the west of the town to look for Nightjars. A quiet lane provided the opportunity, we had perfect weather, a lovely setting sun with a bright red sky. It wasn’t long before a Red-necked Nightjar flew up from the side of the road, we watched it hawking insects with a back-drop of a beautiful sunset. A second bird came into view for a short while and that was all we got. It was 10:30pm when we got back to the Finca, it had been another long day but a very enjoyable one.