WEATHER: Another great day, all day sunshine with a breeze, lower temperatures, max around 25C

After a 7am breakfast we met in the car park from where we heard Golden Orioles calling, they were in a small row of trees not too far away, we got one male in the scope and all had brief but excellent views of it. After that excitement we set off toward Trujillo and stopped after 8km on part of the old road. We were on a hill and from the roadside we had excellent views over a large area of scrub and scattered granite boulders. We were hoping for better views of Black-eared Wheatear but what we got was quite unexpected. A juvenile Great Spotted Cuckoo was sitting in a dead tree and after a short while a Eurasian Magpie came up and fed it!! Normally they chase these cuckoos and give them hell, so we were obviously watching a Magpie feeding what it thought to be its own chick!! Never seen that before.

From Trujillo we drove towards Santa Marta De Magasca, turning off on a wide track where large pasture fields could be seen on sloping hillsides, it looked an ideal place to search for Sandgrouse our main target species.  Along the way, and quite bizarrely, we saw two Common Shelduck flying over the grass plains!!We quickly located four Great Bustards, dozens of Calandra Larks, also Crested Larks and Black Kites. Then we caught view of a single Black-bellied Sandgrouse, it flew quite a distance away from us and circled round and dropped below the skyline. I knew that there was a small lake over the hill and hoped the bird had landed there for a drink. 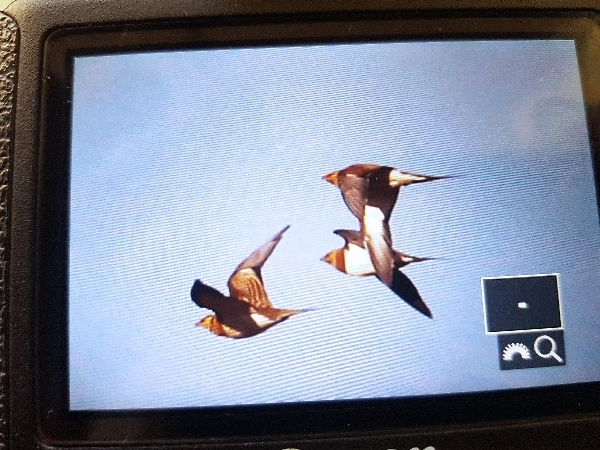 Back of camera shot  - original taken by Rosemary Aitken

Well, over the next hour we had a terrific time watching many small groups of Sandgrouse coming down to drink and often flying right over us giving us wonderful views. We saw a couple of dozen Pin-tailed Sandgrouse but never relocated the Black-bellied, although we did hear one calling a little later. Also, around the pond we saw Black-winged Stilts, Little Ringed Plover, White Wagtails and in the water, half a dozen Little Grebes swan about. Both Cattle and Little Egret dropped in with the occasional White Stork and two Grey Herons flew over.

We sat in the plaza major in Santa Marta drinking lovely coffee before setting off toward Monroy. We made several stops along the way and it was not until lunchtime that we finally arrived. Two of our stops were on bridges spanning the Rio Magasca, we saw quite a few species at the first bridge and very few at the second. Both Crag & House Martins, Red-rumped & Barn Swallows tended their nests under the bridges and White Wagtails, Kingfishers and Little Ringed Plovers were seen around the water. We also noted Serin, Goldfinch, Spanish Sparrow, Chaffinch and lots of other common species. At the second bridge we watched Egyptian and Griffon Vultures coming down and landing on a rock-face along the river, large groups of Black Kites with occasional Red Kite were also noted.

We ate our lunch sitting in the plaza major of Monroy, a nice cold drink helped our freshly made bocadillos go down a treat. For the next hour we visited the large reservoir at Talavan, we parked at the presa (dam) and scanned the water. To be frank there was more activity around a White Storks nest than in and around the water. We saw a couple of Great Crested Grebes, a few mallards and three Grey Herons. 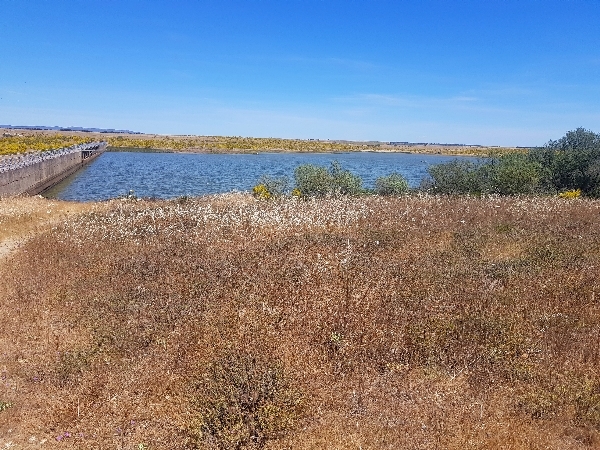 The Monroy to Trujillo road passes through some enormous grass meadows and is a regular spot where to see Montagu’s Harriers, not today, it was very disappointing not to see a single harrier. In fact, we have only seen one female Montagu’s Harrier during the whole trip. I know the conservation groups are very worried about the absence of a quintessential and iconic ‘plains bird’. We did see many Black Kites and the odd Booted Eagle with distant Griffon and Black Vultures, most of our time was spent watching butterflies and other interesting insects.

At Trujillo the group went for a walk up to the Castle and enjoyed the superb panoramic views of the surrounding countryside from the castle ramparts. We sat in the Plaza Major to soak up the ambiance of such an interesting and ancient place. We also spent some time watching the local swift population zooming around the ancient buildings, we picked out one or two Pallid Swifts but it was hard to find them.

Our last dinner at Finca Santa Marta was delicious, the current chef is brilliant, inventive and imaginative, what a treat. We checked the bird list just before dinner, we have 132 species on the list with another 25 possible in the mountains of Gredos and that is where we are heading tomorrow.