WEATHER:  a dull start in the mountains but sunny down the valley. Temp 11 – 20C

The weather forced us to change our plans today, the forecast was not too good locally but it looked good down the valley, so that is where we headed for. Our walk before breakfast took us to the ‘Boca de Infernio’ (devil’s mouth) where the river Aragón Subordán thunders through a spectacular narrow gorge, it is the site where the Wallcreeper used to breed many years ago. We saw Grey Wagtail and not much else but it was worth a visit just to see the tumultuous river cascading through the gorge. 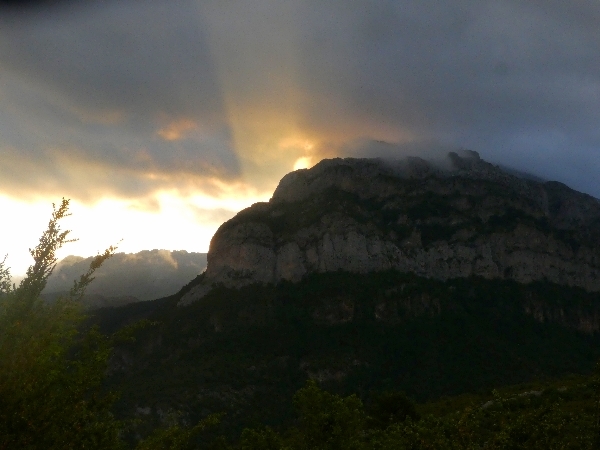 Sunrise over the mountains, taken from my hotel room

We also re-visited the river at the bridge just below the hotel and this time we all had much better views of the Dipper. It was a little windy and this enticed more vultures into the sky, there were plenty of both Griffon and Egyptian Vultures out this morning.

Our first venue after dinner was down at the Rio Aragón near Fuente de Reina we parked near a small bridge in a wooded area. From the bridge we saw Great Cormorant, Common Sandpiper, White Wagtail and Grey Heron. Lots of Golden Orioles called from the trees and every bush seemed to have a Garden Warbler singing from it. We also heard Cetti’s Warbler, Common Nightingale and the ‘butterfly boys’, Kevin and Tony found several new species for the list. 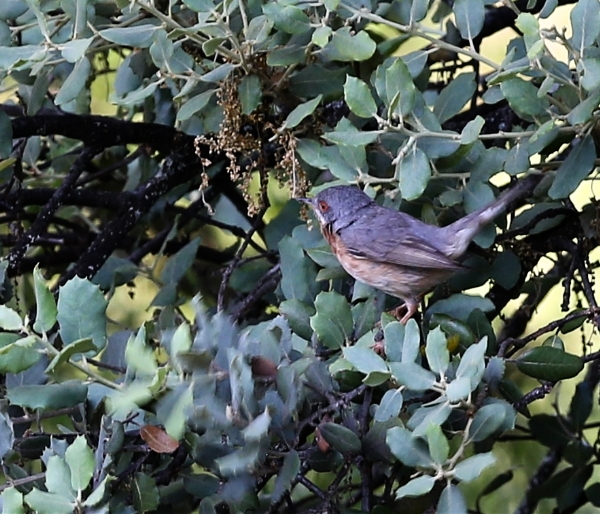 Just a little further along the main road to Jaca there is a small patch of oak woodland and this where we went to next. Our target birds were in the bag within minutes of arriving. Both Subalpine and Bonelli’s Warblers showed really well and a bonus find was a Short-toed Treecreeper. We saw both Booted and Short-toed Eagles up on thermals with the Vutlures. 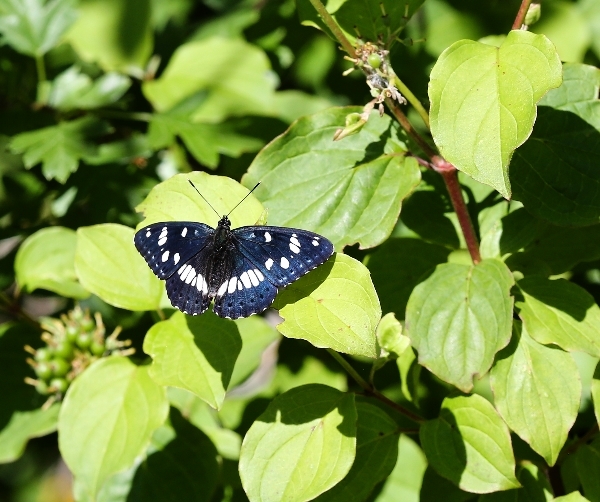 We also stopped where a stream crosses underneath the road a few hundred meters along the same lane and where an area of open scrub follows the course of the stream. This habitat is favoured by the Orphean Warbler and one was singing when we arrived. It took a while to locate it, but we all had reasonable views in the end. Southern White Admiral, Ilex Hairstreak and a few other species went onto the butterfly list. 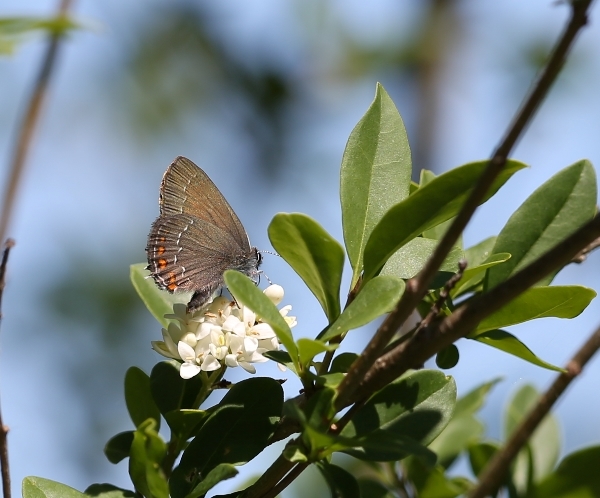 Ilex Hairstreak,  yes you guessed it! A Kevin Jones picture

After driving through Jaca we headed for the Ski Resorts at Candanchu and Astún very close to the French border. The wide-open grass slopes with rocky outcrops are ideal habitat for a number of species. At first the area seemed devoid of bird-life but after a short walk we began to find some interesting species. Water Pipits were singing as they performed their parachuting display flight, Linnets and Black Redstarts seemed to everywhere and very pale looking Northern Wheatears went about collecting food for their brood. 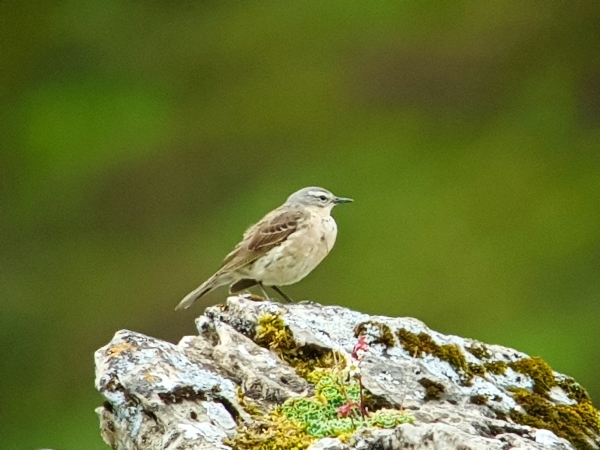 A Water Pipit by me

Both Alpine and Red-billed Chough fed on the grass ski slopes and the low cloud forced the Griffon Vultures to fly very low as they emerged from the French side of the mountains. But, it was the Common Rock Thrush and the Citril Finch that we were after. After quite a walk we eventually found up to four probable Rock Thrushes, three males and a female, what a stunning bird, they got the group’s full attention. Two of us also saw Citril Finches but they flew off before the others arrived to see them. A couple of nice Orchids were found by ‘Orchid Girl’ Christine, the Elder-flowered Orchid was in abundance in sheltered areas near the rocks. We also saw Alpine Marmot sitting out during sunny spells. 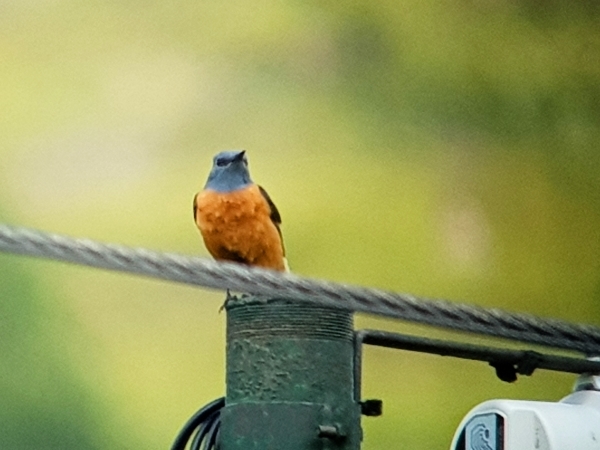 During past visits I have often taken group over the border into France to a site where I have seen the Citril Finch and today we did just that. As soon as we got out of the vehicles we saw a small group of the finches fly up from the grass verge. After a little patience we got our reward, great views in the ‘scope of this sought-after little gem. 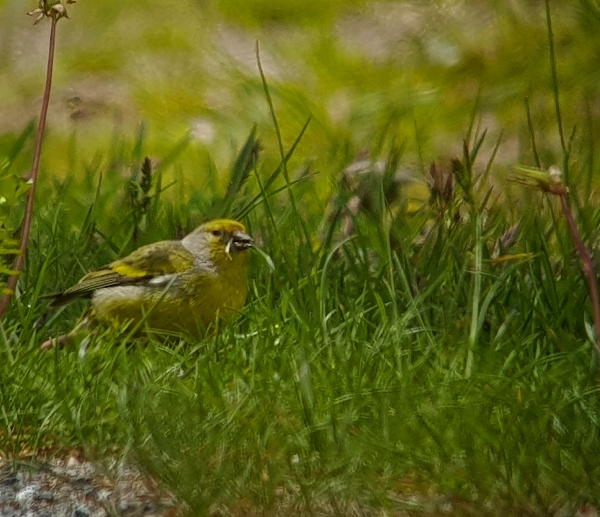 We had a second reward in the form of a coffee break back over in Spain, we also found a couple more Orchids, the delicate Fragrant Orchid was a crowd pleaser. A Swallowtail Butterfly sat on the mud in the car park, it was taking in minerals, it looked so out of place, this bundle of vibrant colour was a stark contrast to the dull grey mud. 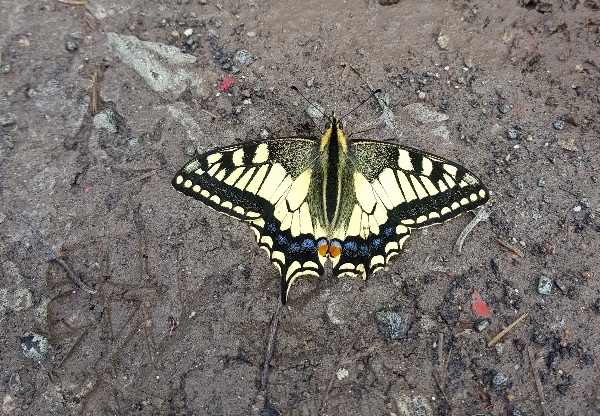 Swallowtail Butterfly taking in minerals from the wet soil

Our visit to Astun Ski Resort was short lived, a chilly wind kept us near the vehicles, we were hoping for a Lammergeier sighting but that never happened. We did a huge ‘kettle’ of Choughs with Griffon Vultures, also Raven, Coal Tit, Goldcrest and Yellowhammer.

We left the ski resorts at 4:30pm and headed for the hotel, we made one stop on the way back in the centre of Jaca at the Citedal. This 16th Century monument in the centre of town has never been damaged, but it provides nesting sites for several bird species. We hoped to see both Rock and Tree Sparrows. We saw both and a host of Common Swifts too, the sky had cleared and it was a very pleasant visit,

We ate dinner at 8pm and afterwards we called the bird log, our bird count is now at 120 species.