PICOS DE EUROPA - FUENTE DE – PEMBES We had a fabulous day today despite the dreadful weather, it rained most of the day but it never stopped us seeing some spectacular species.

After our 7:30am breakfast we drove the short distance to Fuente De where the ‘Terifico’ (cable car) terminal is found. It was raining and cloud covered the upper terminal, this did not deter us we were committed to going up to the high peaks.

As we were early we birded around the car parks for a while, listing Eurasian Nuthatch, Eurasian Jay, Coal Tit, Black Redstart and White Wagtail. 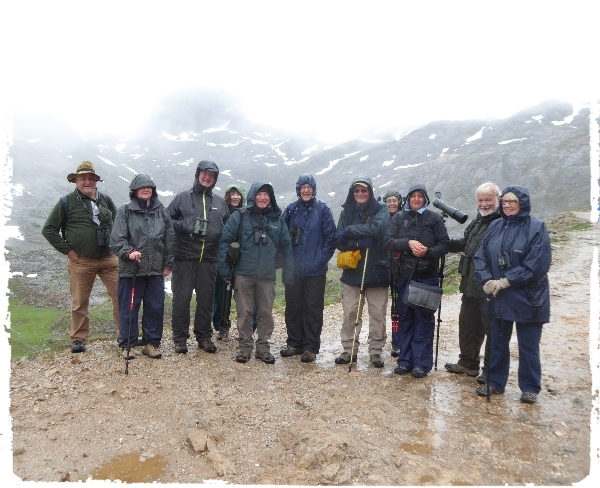 Once at the top we were in the clouds, it continued to rain lightly and it was quite cold, but it was calm. The thick mist from the clouds would drift away on occasion giving us great views of the magnificent scenery in front of us. It was like a lunar landscape except patches of snow brought you back down to earth.

As we emerged from the shelter of the upper cable-car terminal we immediately found our number one of our target species, SNOW FINCH. It was a male and it flew in front of us and landed across the track where a second male bird was located. Both birds flew around for a while before disappearing over a ridge, wow what a start!

Very soon after we watched Alpine Chough and Northern Wheatear and as we walked slowly forward our second target species flew up from the track and landed on rocks not too far ahead. This ALPINE ACCENTOR showed very well before walking over a grassy bank and out of sight, marvellous, in ten minutes we had two ‘biggies’ in the bag. 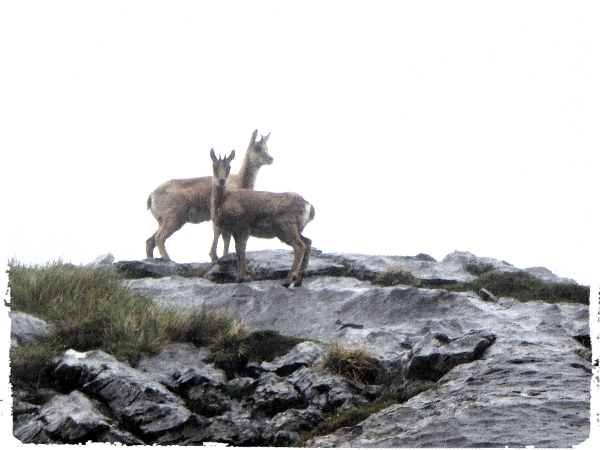 Chamois checking us out!

The rain eased off for a while and it got lighter, we added Black Redstart and Water Pipit to the list before our third big sighting in this first hour was made. A WALLCREEPER appeared below us, it moving slowly across a rock face and then flew even closer. We stood mesmerised watching this enigmatic little beauty, it flitted around some scree before flying across a small gorge some 50 meters away, we lost it in the mist just after, it was really fantastic to look down on this bird instead of craning our necks looking up!

Nothing could follow that, we had excellent close views of Alpine Chough and more sightings of Northern Wheatear and Black Redstart before we went back to the cable car terminal and had a nice hot drink.

Back down at ‘base camp’ a Peregrine Falcon and Red-billed Chough went onto the list. We then enjoyed a lovely lunch of hot soup and bread before driving down the valley for some afternoon woodland birding. We drove to an ancient village called Pembes, a fascinating place where all the buildings look 19th Century, most are untouched, some are derelict and in need of repair and a few have been renovated. The village is full of birds because there are so many places for them to nest! Black Redstarts abound, as do Barn Swallows, White Wagtails, House Sparrows, Serins, Greenfinches and Goldfinches.

Our main targets were Common Redstart and any woodpeckers we could find, we walked up through the village onto a track that led up into the deciduous woodland. We saw Spotted Flycatcher, Common Buzzard, Eurasian Jay and not much else, then the rain began again, it got too dull to bird so we gave up.

As we re-entered the village we found a male Common Redstart, then we heard a woodpecker call, it was a MIDDLE SPOTTED WOODPECKER, it flew into view and landed very close to us. After several minutes of watching this bird we realised that it was carrying food and was trying to get to its nest hole, so we quickly withdrew.

Back at the buses we saw lots more Common Redstarts, Stonechat and two more woodpeckers, Green and Great-spotted, a Common Cuckoo called un the distance as we boarded the buses.

At the hotel we watched White-throated Dipper in the stream and a Eurasian Jay attacking the nest of a Grey Wagtail, it took a chick and flew off, the parent wagtail birds were powerless but they tried their best to defend the nest.

Well that was the end of our last full day and despite the bad weather we cleaned-up the Picos de Europa seeing all of our target species!