WEATHER:  no change, hot and sunny all day, quite windy. Max temp 28C

Another hot day with an abrupt change of plan as originally we left our hotel heading for a day out on Gibraltar. As we started boarding the bus we noticed large groups of Black Kites swirling above the hotel, a group of about 200 went over us. Then as we approached Tarifa we saw many more Black Kites, in fact we saw thousands of them, drifting in huge flocks trying to catch thermals in very windy conditions. It was then that we changed our plans and decided to stay in the Tarifa area. 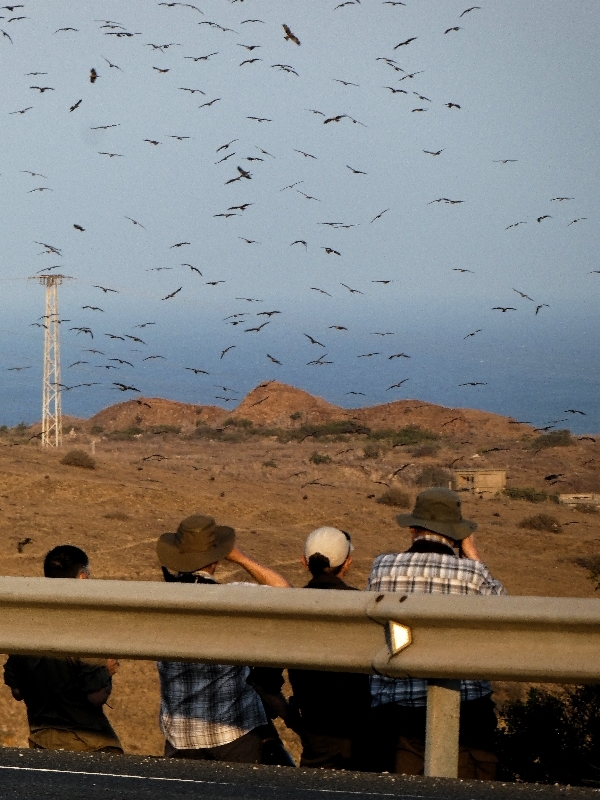 We pulled over and made the decision to stay in the area based on the number of birds in the sky, we postponed our trip to Gibraltar, the lure of thousand of raptors in the sky was too great and after all this is the main reason for the tour. We parked at the side of the main road just outside of Tarifa and standing behind the crash barriers we looked down into a valley that was filled with Black Kites. There was over one thousand perched on the ground and at least another 3 thousand in the air, it was magnificent, a fantastic sight. 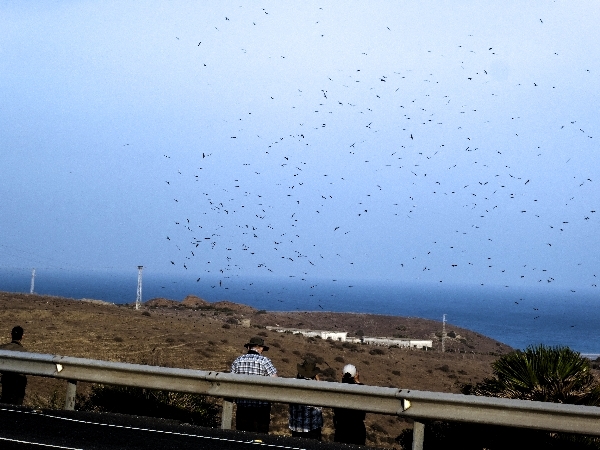 We spent an hour watching the birds as they got up and fought the windy conditions and then headed off towards Tarifa town and presumably out to sea. We drove down to the coast at El Trafico hoping for more of the same but it wasn’t to be. We did see a good number of Honey Buzzards pass over very high up and one or two very low, we watched the latter set off to see flying at sea-level we didn’t that they were going to make it.

Small flocks of Black Kites emerged from towards Tarifa but not many, we also saw Eurasian Sparrowhawk and a few Bee-eater flocks. Before returning to Tarifa another stop found us walking along a track beneath some mature trees and bushes, we found Spotted Flycatcher, a single Chiffchaff sp, a few Honey Buzzards flushed from the trees as we walked along. Half a dozen Egyptian Vultures flew over with more Honey Buzzards. 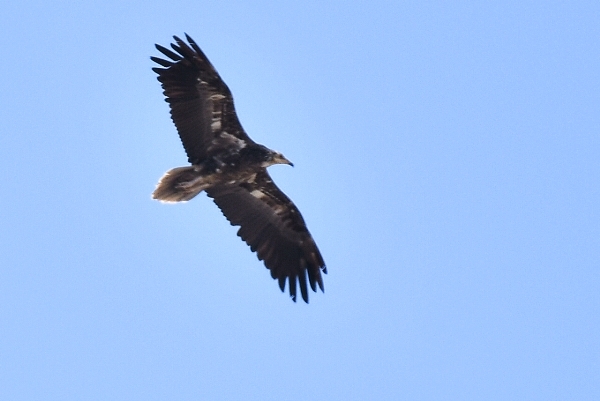 Driving back to Tarifa we noticed that most of the Kites had gone just few hundred were hanging around, we drove to the supermarket and bought our lunch supplies. From there we went down the main road and turned into the Ojen Valley where we spent a couple hours making two or three stops to look for passerines in the bushes. 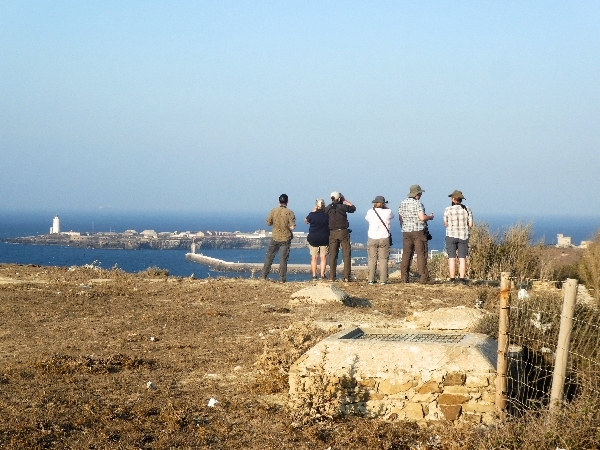 the look-out at El Trafico, you can see Tarifa 'island' in the distance

Our first stop produced very little, we stood and watched a pool of water hidden deep in the undergrowth, a few birds were coming down but it was so hard get onto them. A House Sparrow, a Blackbird and a Cetti’s Warbler (the latter seen by me only) was all we got. Quite a few raptors were seen, a Lesser Kestrel (male) sat on allow power line, a good dozen or so of Short-toed Eagles, some Booted Eagles, more Black Kites and a ‘kettle’ of Griffon Vultures held over 100 birds, an amazing sight.

more Black Kites - each little dot you can see on the hillside is a Black Kite - we counted over 1,000 on the ground

Our lunch stop was taken deep in the Ojen Valley near some remote farmsteads with cattle roaming in well trodden woodland made up of young cork oak and wild olive trees, it was dripping with birds. Whilst we ate we noted several Spotted Flycatchers, a few Common Redstarts and a Short-toed Treecreeper. Then we went for a walk in the woodland and found dozens of Spotted Flycatchers and Common Redstarts and not much else. We did see a single Bonelli’s Warbler, more Short-toed Treecreepers and a few common woodland species. 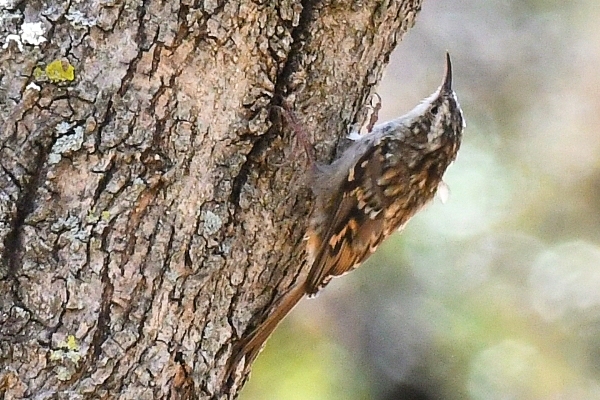 The rest of the afternoon petered out and the birding went downhill rapidly. Track to the Reservoir called Almodovar is now closed to traffic so it requires a 2km walk which we did only to find the reservoir completely devoid of birdlife. However, the track does pass through some nice habitat and we did see some new species for the list. Great Spotted Woodpecker, more Short-toed Treecreepers, Cirl Bunting, Common Stonechat, Greenfinch, Common Chaffinch and to our great delight a couple of Firecrests. 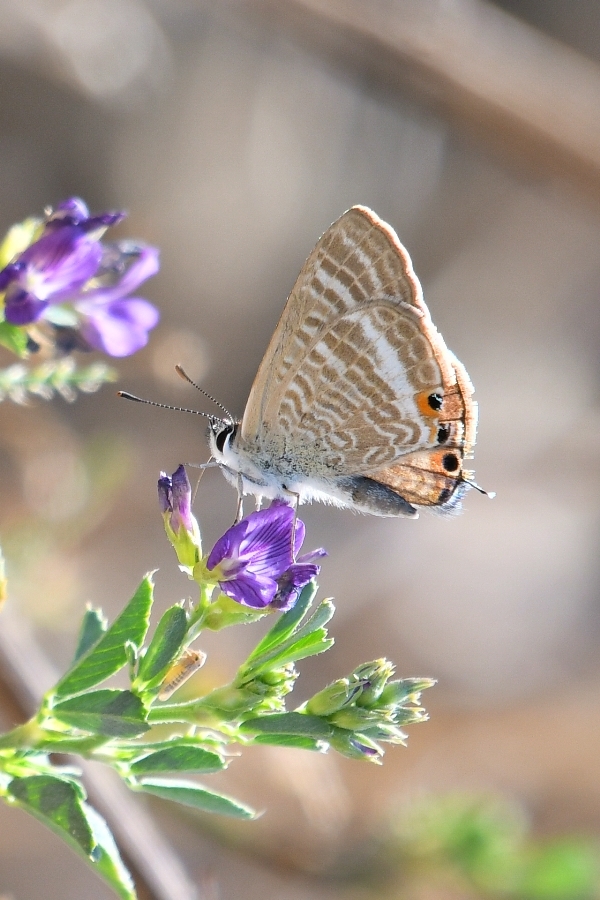 After driving back to the coast road we stopped for a coffee, a cold drink and/or an ice-cream before making the short trip to the large expanse of wheat fields near the town of Tahivilla. Making several stops to search for Calandra Larks and Whinchats (neither of which turned up), we did manage to see Corn Bunting, dozens of Common Stonechats, a couple of Northern Wheatears, flocks of House Sparrows, Crested Larks, Lesser Kestrel and a couple of butterflies.

The interesting phenomenon of 'aestevation' - a summer hibernation of White Snails. They gather like this during the hot periods of the summer and then return to the ground once the rains come in the autumn.

We got back to the hotel around 5:30pm, some went for a swim in the pool, others relaxed on their terrace with a cold beer and some had a short nap. Dinner was served at 8pm and very nice it was too.