We set off at 7:30am for the long journey to Laguna Medina which is just outside of Jerez, we arrived at 9:15am in bright sunshine and no wind, smashing!

The air was alive with bird song as we began our walk to the only hide available at this site. The reeds and shrubs along the perimeter of the laguna were brimming with birds but the water itself is rather degraded and very few birds were out there, this is due to the large number of carp that have been put into the water, they eat everything. 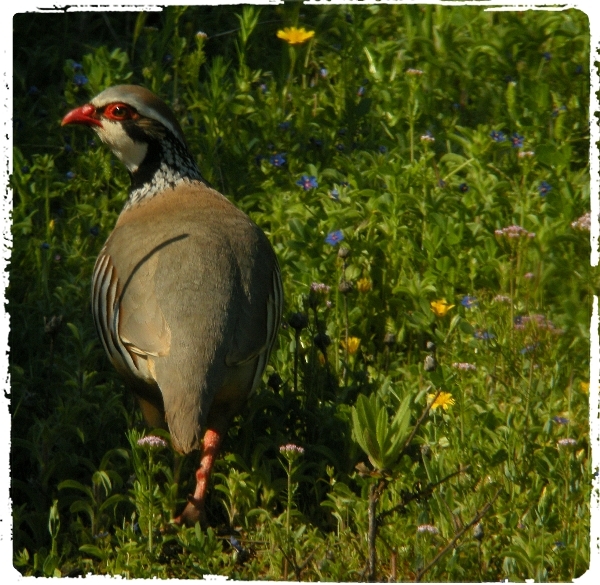 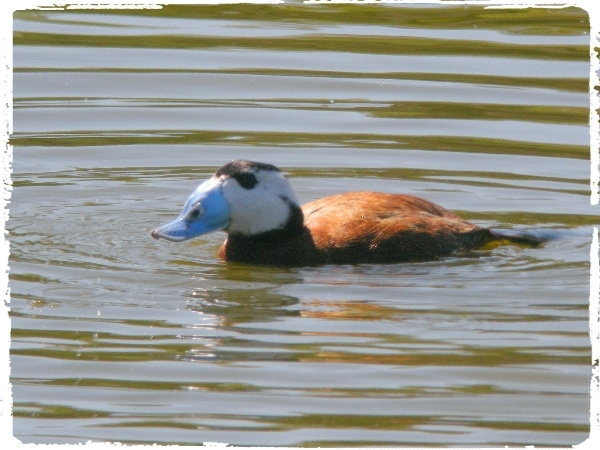 On the way to Sanlucar de Barameda we made very brief visits to a couple of small lagunas but they were dry so we didn’t stay long. At Sanlucar we visited 3 lagunas just outside the town where we spent a lovely hour watching a good variety of species the best of which was MARBLED DUCK, a single bird was seen. White-headed Duck was seen in good numbers also Purple Swamphen, Red-crested and Common Pochard and plenty of Little Grebes. 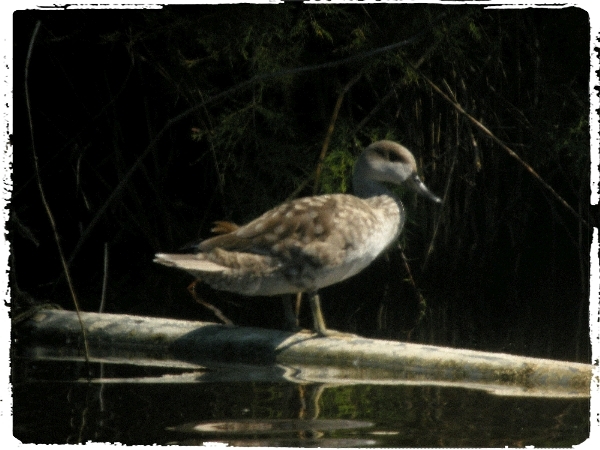 a poor photo of the only MARBLED DUCK seen today

At Bonanza Salt Pans the number of birds and the variety of species was quite low but our visit was enjoyed by all. The most common waders were Curlew Sandpiper, many were sporting their beautiful summer plumage, likewise Dunlin, Little Stint and Sanderling. Both Redshank and Greenshank and Grey Plover were the sum total of the larger waders.

Huge numbers of Greater Flamingos filled some of the pans with equal numbers of Avocets and Black-winged Stilts. One of my favourite gulls, the Slender-billed Gull numbered in their hundreds and a few Common Shelducks sat on the dirt banks. We drove to the shoreline of the River Guadalquiver where we saw Ringed Plover, Common Sandpiper and several Black Kites drifted over the trees on the far bank, which is, in fact, part of the Doñana National Park.

Laguna Tarelo had many birds on the water and in the breeding colony on the island, many nesting Cattle Egrets were joined by Glossy Ibis, Eurasian Spoonbill, Night Heron and lne or two pairs of Squacco Herons.

Birds ln the water included many Red-crested and Common Pochard, White-headed Duck, Gadwall, Northern Shoveler and Mallards. Lots of Little Grebes combined with our first Black-necked Grebes made up the rest of the sightings.

Our last venue was about a 30 minute drive from Laguna Tarelo, we headed back along the coast towards home to Chipiona. This seaside town has played host to a colony of Little Swifts for several years now, probably the only accessible one on mainland Europe. About 10-15 pairs are found there, they were very busy pairing off and visiting their nests when we arrived, it was a lovely sight to see so many of them reeling around our heads.

A huge flock of Ruddy Turnstones were roosting nearby on a jetty, there must have been 100-150 of them, a pre-migration gathering I speculated. 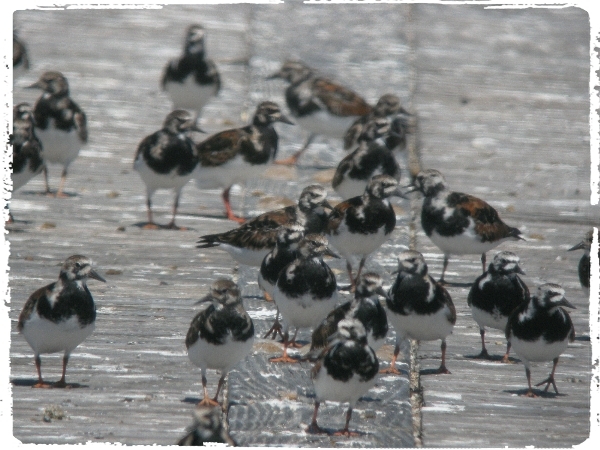 Ruddy Turnstone  - on the jetty at Chipiona

Well it was now 4pm and we had a 2hr drive ahead of us so we set off, a quick stop for coffee along the way broke the journey, we arrived home just as we set off this morning in bright sunshine, may the good weather continue.