I spent most of the morning shuttling clients from the airport to the beach area near Guadalmar where we found Bee-eaters, Hoopoes, Woodchat Shrike, Spotless Starling, Crested Lark, Little Ringed Plover and several common species.

After the last two clients arrived at 12:30 we set off for Coto Donana via Sevilla. After an hour we stopped at the huge Laguna Fuente de Piedra where a good number of species went onto our trip list. 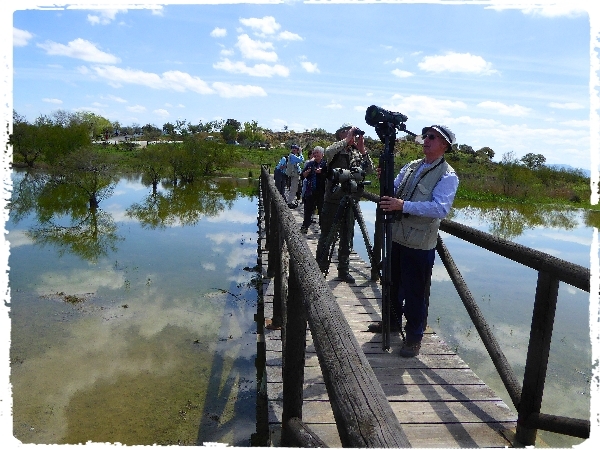 On the board-walk at Fuente de Piedra

Several species of waders fed in the smaller lagunas near the visitor’s centre, we saw Ruff, Common Sandpiper, Common Redshank, Dunlin, Curlew Sandpiper, Wood Sandpiper, Little Stint, Pied Avocet and Black-winged Stilt. Both Whiskered and Gull-billed Terns fed over the water and to our great surprise we found a LITTLE GULL feeding just like the terns. 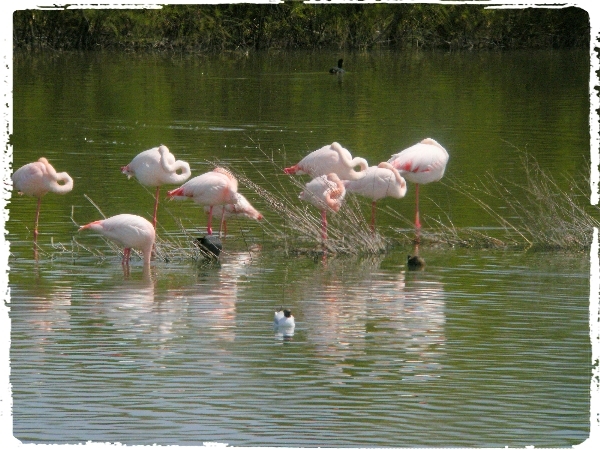 Our walk took us to passed the large laguna which was virtually devoid of water, consequently very few Greater Flamingos were present, instead of 10,000 pairs there was probably 500! Common Shelduck joined many Gulls out on the dry laguna and in the scrub nearby we found a GREAT SPOTTED CUCKOO, what a great sighting and we had such good views of it.

From a hide overlooking a third laguna we added a few species of duck including not only the sought after White-headed Duck but also Northern Shoveler, Common & Red-crested Pochard, Gadwall and Little Grebe. Very few warblers and wagtails were seen in the area and our time there soon ran out.

We drove a little further along the autovia before stopping for a late lunch, it was 4pm by the time we set off in earnest for Donana. By 6:15 we had arrived at El Rocio where we found ourselves scoping the huge laguna that sits just by the side of this picturesque and unique town.

The laguna was covered in small flocks of birds and littered with grassy island where even more birds fed. We added Glossy Ibis, Eurasian Spoonbill, Northern Pintail, Purple Swamphen and to our great delight we added Red-knobbed Coot to the list when we found two of them swimming with a flock of about 40 Common Coots. Many Black Kite drifted over the town and laguna, White Storks drifted over too and the sky was full of House Martins and Barn Swallows. 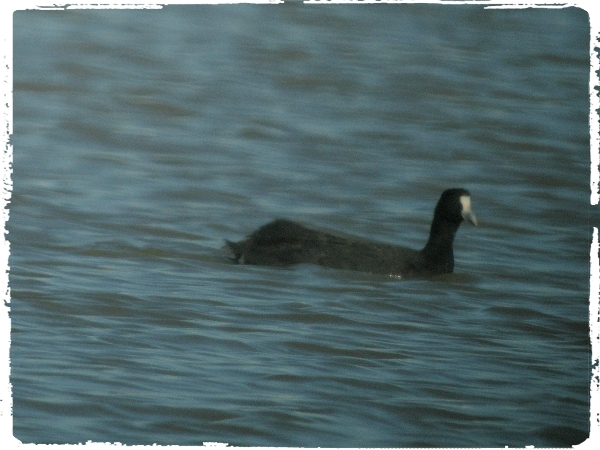 record shot of a distant Red-knobbed Coot above, you can make out the bluish colour of the bill and the white-face plate. No sign of Red-knobs yet in this young bird. 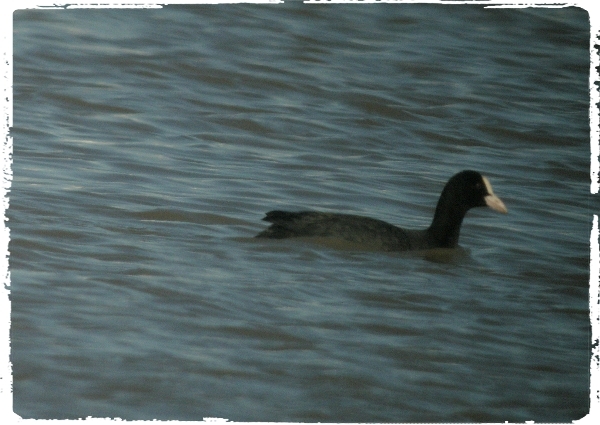 We left this magical setting and drove into town to check into our hotel, donner was taken on the terrace where beer and wine flowed as we ate a lovely selection of dishes.