COREDOR DE VERDE, DEHESA DE ABAJO, NORTHERN MARSHES, JOSE VALVERDE VISITOR’S CENTRE. Today was our big day in the park and we had excellent weather for our visit, dry and sunny with some cloud, smashing!

We set off in the dark at 7am carrying our picnic breakfast with us. We planned to drive round to Villamonrique and approach the national park through the Northern Marshes. Our first planned stop was at a site where I have seen Tawny Owl in the past but just before that a Red-necked Nightjar flew across the road in front of the bus. The owls were not playing game today and failed to turn up so we pressed on.

As it got light we saw lots of Azure-winged Magpies leaving their roost in pine woods and plenty of White Storks on their nests. We drove along the Corredor de Verde, a green ‘buffer’ or belt-way put in to separate a number of towns from the national park as a result of the ecological disaster of 1998 when millions of litres of water containing heavy metals flooded into the area from a small mining operation nearby. 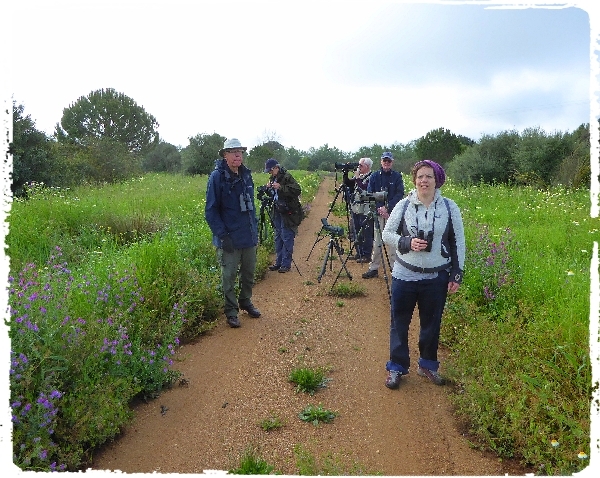 Now this verdant drive is full of wildlife again, we saw Algerian Hedgehog, Hares and Rabbits and lots of birds. At our first stop we searched in vain for Black-winged Kite, the open woodland, which is its favoured habitat, has changed over recent years, the undergrowth has grown tremendously thus forming a more enclosed woodland. I think the birds have moved on to other places. 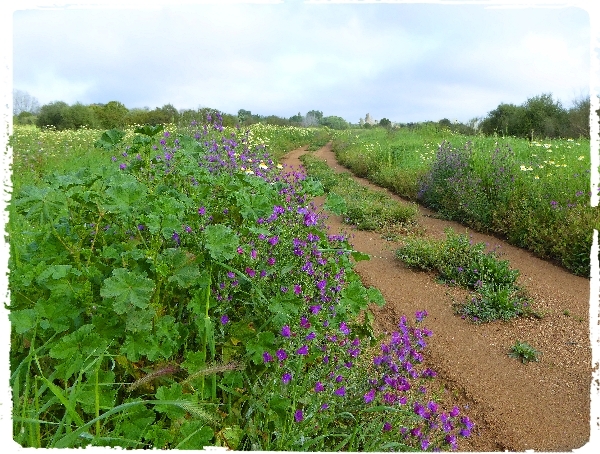 We ate our picnic breakfast before driving further along the Corredor, stopping to watch Booted Eagle, Black Kite, Common Buzzard, Little Owl, Yellow Wagtail and Spanish Sparrow. Our next official stop was at a eucalyptus wood where thousands of Spanish Sparrows were nesting¸ the noise coming from the wood was deafening. We watched Lesser Kestrels, lots of European Bee-eaters, Booted and Short-toed Eagles and our first Common Chiffchaff.

Dehesa de Abajo is a visitor’s centre where a huge storage reservoir of water is home to thousands of birds, today it was relatively quiet with lower numbers than usual, but it still held a great number of species. 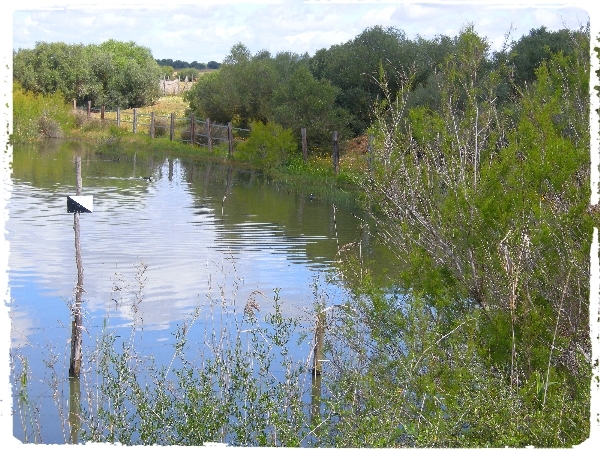 We found our first Great Reed Warblers, Black-necked Grebes, Squacco Heron and another exotic species in the form of Black-faced Weaver (Ploceus melanocephalous), a few pairs were nest building. The reservoir was covered in coots, flamingos, several duck species, three species of grebes, spoonbills, ibis, herons and egrets. Overhead hundreds of storks, kites, buzzards, ravens, jackdaws, swallows, martins and swifts filled the sky and a handful of Whiskered Terns fed over the water,  we had a marvellous time watching all of those species. At the far end of the water we located three Red-knobbed Coots, two had white neck-collars (denoting that they were bred in captivity and released) and one was a ‘natural’. 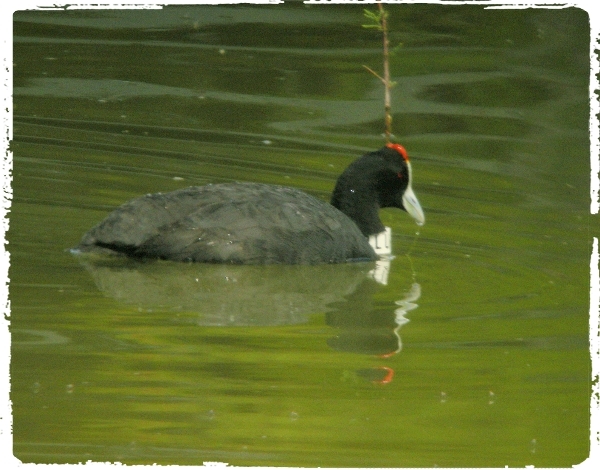 Red-knobbed Coot with the white collar

It was now lunch-time so we drove a few kilometers to a small venta where we sat and ate omelettes and lomo de cerde sandwiches washed down with the lovely Spanish coffee.

Before driving down the Velverde Centre we drove onto a muddy track near the reservoir to look for another exotic, the Yellow-crowned Bishop. It was nearly a complete disaster as I got the bus stuck in thick, heavy mud, whoops!! Luckily the group rallied round and gathered wood etc to put under the wheels and collectively, with some and pushing and cajoling, we managed to free it, phew!

After clearing thick mud from our boots we carried on to the national park, we soon realised how dry it was many ditches and usual pool sites were completely devoid of water. Even the main supply canal was very low, but this had the advantage of exposing usually unseen mud, a ‘sweety-shop’ for waders! Some areas were covered in ‘shanks’ and Black-winged Stilts, we saw hundreds of Redshanks, Spotted Redshanks and Greenshanks, they were joined by Glossy Ibis, Eurasian Spoonbills and Grey Herons. 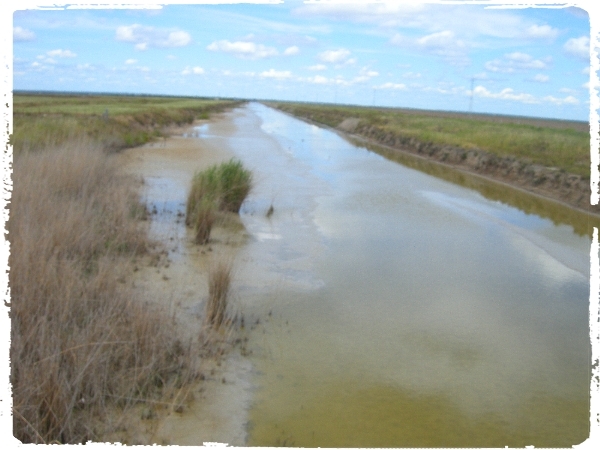 Our drive continued along dry tracks where we listed a number of larks, Eurasian Skylark, Crested Lark, Greater Short-toed Lark and the impressive Calandra Lark, the latter was commonly up on the wing delivering its beautiful song. We also listed Northern Wheatears, Yellow Wagtails, innumerable Corn Buntings and Zitting Cisticolas. We also saw the odd Little, Great and Cattle Egrets and lots of kites, buzzards, eagles but no Harriers. 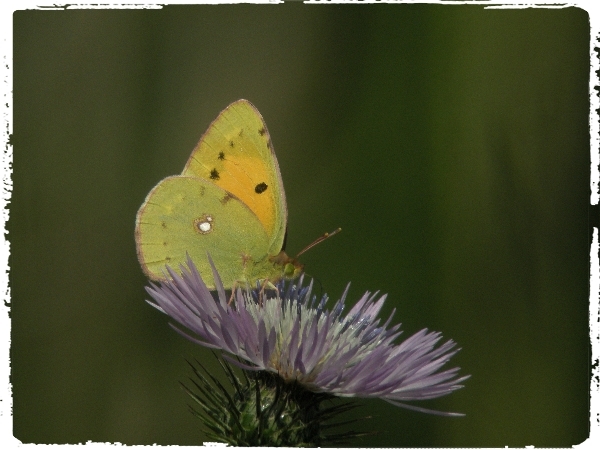 Clouded Yellow butterfly - we saw dozens of these along the tracks

Our attempt to find sandgrouse and pratincoles failed but before reaching the Jose Valverde Centre we found Whinchat, 16 Ravens, Red Kite, Griffon Vulture, Northern Lapwing, Ruff, Dunlin and hundreds of Greater Flamingos (in the only water around, next to the ‘centre’.

Whilst drinking afternoon coffee we enjoyed watching the ‘henrony’ through plate glass windows, though numbers were well down, whilst  Purple Heron, Night Heron, Squacco Heron and Little Bittern were completely absent. It was a shadow of its former self and must have been due to the very low water levels and its absence in many areas. 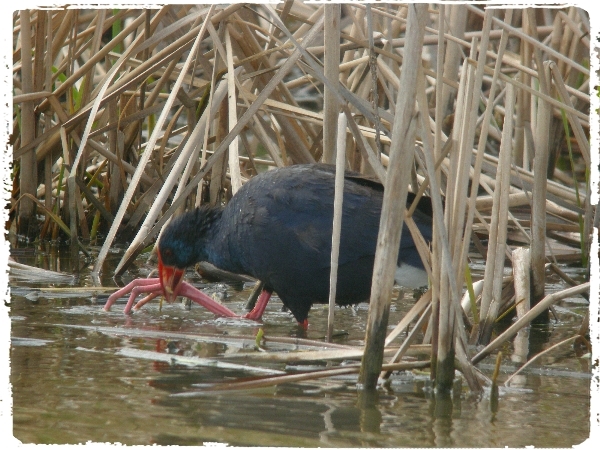 Our return journey was far less exciting except for one stop where Paul found our last remaining lark, the Lesser Short-toed Lark, nice one. We got back to El Rocio at 6:20pm where a cold beer went down very well before another lovely meal on the terrace.