BELEN PLAIN – SANTA MARTA DE MAGASCAR – RIO ALMONTE – CASARES PLAINS - TALAVAN RESERVOIR We had a great morning with some superb birding but the afternoon was more or less a write-off because of persistent heavy rainfall.

We met for breakfast just before 7am and we were on the road before 8am just as it was getting light. It was clear with no wind, perfect for birding the open plains near Belen Village.

We arrived on the plains after a very short trip, many larks were up singing as were Corn Buntings all along the fence-lines and Hoopoes called from poles and rocks. We found many vultures on the ground near a carcass of a cow, about 50 Griffon Vultures were joined by a single Egyptian Vulture, Black Kites and a couple of Ravens loitered in the background.

We then found one of our target species, the Great Bustard, a couple of males were performing their extraordinary display in front of several females. They appear to turn themselves inside out, a mass of white feathers stand out like a beacon in the middle of the plains, at this stage the females walked on disinterested. 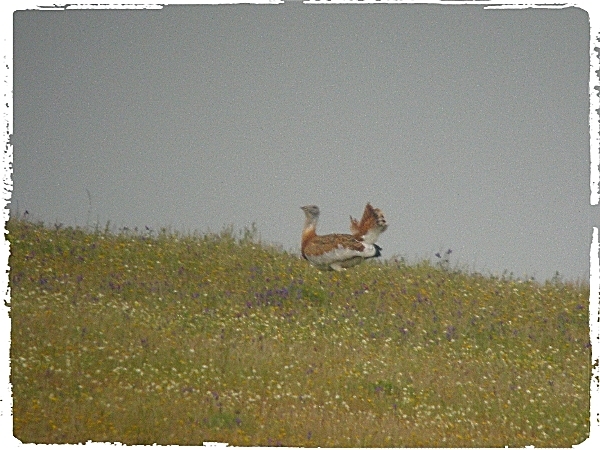 a record shot of a distance Great Bustard

As we watched the Great Bustard we found a single Little Bustard, a male, he was also performing his display. He ran back and forth and at the end of each run he would raise himself up, stretch out his neck and throw his head backwards as he issued his short, ‘raspberry’ call. We  watched this little guy get very excited but we never saw a female or a rival male!

From there we drove further into the plains area but turned off and headed towards an area of Dehesa, open woodland hoping to see a Black-winged Kite. We were distracted from our search by other species including a couple of GREAT SPOTTED CUCKOOS, these two sought after birds were being chased all over the area by a number of Common Magpies, their host species! It was very entertaining, the Magpies often gave up the chase to concentrate their efforts on to a perched Booted Eagle which didn’t seem too bothered.

Several other  species were found we whilst we watched the ‘chase’, Eurasian Hoopoe, Southern Grey & Woodchat Shrikes, Stone Curlew (a pair of them), Azure-winged Magpie, European Bee-eater, Northern Wheatear, Common Stonechat, Thekla Lark and a couple of Greater Short-toed Larks were seen on the road during the drive to get there.

From Belen we drove up through Trujillo to get to the Llanos de Santa Marta de Magasca, an area of flat open scrub with rocky out-crops. But first we stopped at the Rio Magasca to find a Common Kingfisher, which we duly did. We also found a small flock of Common Waxbills, Melodious Warbler, Cetti’s Warbler, Spanish Sparrow and lots of Jackdaws. It was there that the first rain shower started. 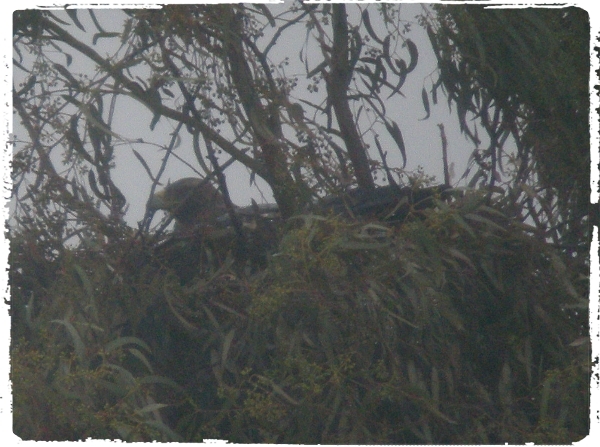 We drove onto the Santa Marta Llanos plains to search for sandgrouse, other groups we talked to had seen small numbers of Black-bellied and large flocks of Pintail Sandgrouse. But after a good hour of searching we came up blank, the rain showers didn’t help and they became far more frequent and prolonged. We did see Whinchat, Northern Wheatear and hundreds of Larks, the most common being the Calandra Lark.

Our next venue was the Casàres Plains where a nest box scheme had successfully encouraged the population of European Rollers to increase. We saw a half dozen or so Rollers, very wet individuals sitting miserably by their chosen box, fewer Lesser Kestrels did the same. Not too far away we stopped to look at the huge nest of a pair of Spanish Imperial Eagles, one of the birds was sitting on eggs, it could be clearly seen through the scope. Further along the same track we added Tawny Pipit to our trip list but not much else.

We stopped to buy lunch and ate it sitting confined to the bus overlooking the Rio Almonte because of the rain, this was the pattern all afternoon. We also drove round to the Reservoir at Talavan where we sat in a nice dry hide, but there was hardly anything to look at!

Driving between river bridges and small villages we travelled along a huge circular route stopping now and then to look at some species, we noted Red-legged Partridge, Red Kites, Black Kites, Common Buzzard, a single Common Redstart but exciting were few and far between, the group became more and more reluctant to get out of the bus, I don’t blame them, it was raining hard most of the afternoon.

By 5pm we had had enough so we quit and drove back to the finca, a large wood burning stove warmed us all up as we sat chilling out with a beer before getting ready for dinner.