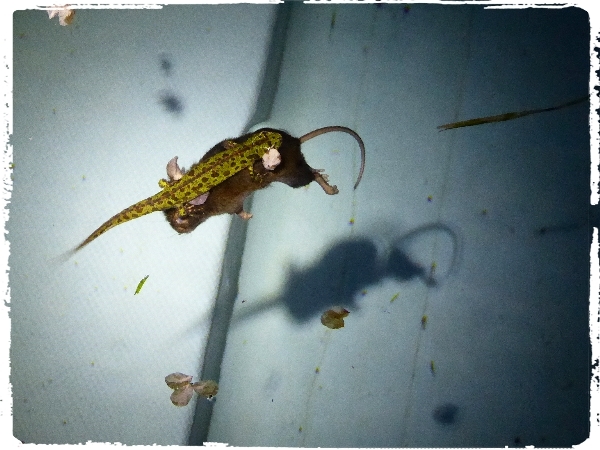 an extraordinary picture of a Marbled Newt riding on the back of a dead Vole, the newt would propel itself across the water using its tail and the vole as a raft! Seen in the swimming pool at Finca Santa Marta 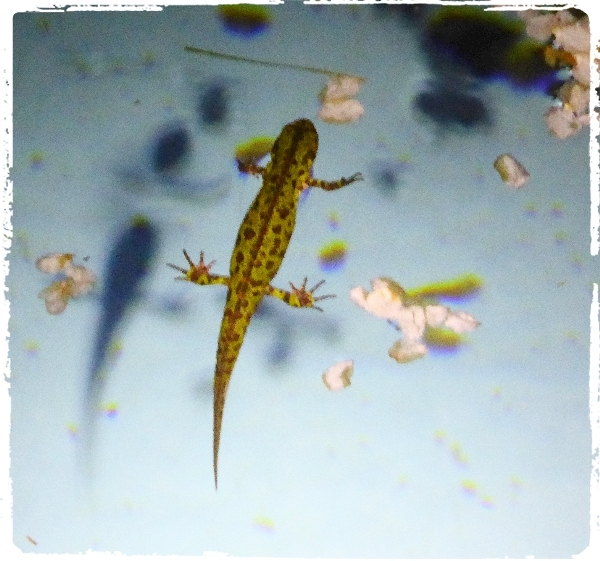 An early breakfast saw us all packed onto the bus by 7:30am, we said goodbye to Finca Santa Marta and headed off to the Plains of Santa Marta to try to see the elusive sandgrouse. It was cloudy with bright patches in the sky and windless, perfect for birding. We arrived at the best spot and started our scanning, the air was alive with sound of the larks and buntings. We found over 20 Great Bustards and just one Little Bustard as well as Stone Curlew, Red-legged Partridge, Common Quail (heard only), Iberian Shrike, Northern Wheatear, Tawny Pipit and countless Calandra Larks. 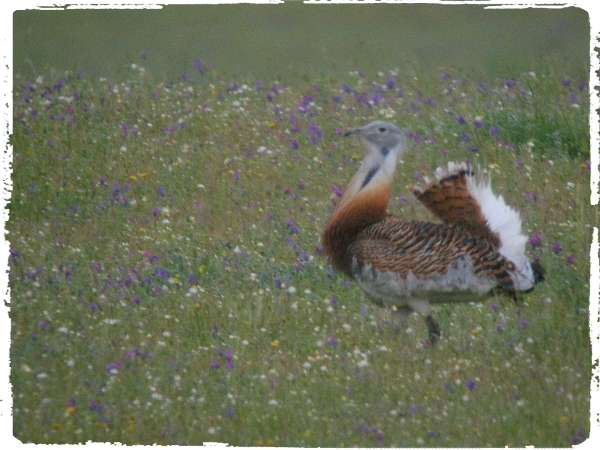 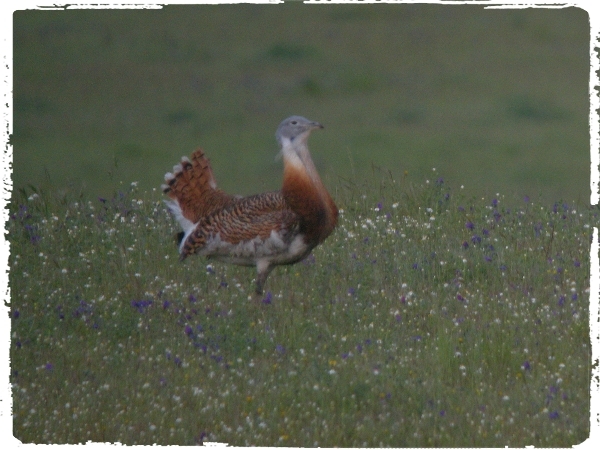 Birds of prey were everywhere too, Red Kites, Black Kites, Griffon and Black Vultures, Common Buzzard, Common Kestrel and our first sighting of Hen Harrier was exciting. But our views of sandgrouse was disappointing, we only saw very distant Black-bellied Sandgrouse, two of them, they disappeared over the far ridge in seconds, never to be found again!

From the plains we drove through Trujillo and onto Monfragüe stopping at our next hotel to drop off our luggage along the way. It was then that, 10am,  that the rain started! We could see the rocky pinnacles of Monfragüe were cloaked in clouds and the Castillo de Monfragüe could not be seen. As we drove into the park we stopped to watch a male Cirl Bunting just before we turned onto the road to the Castillo. We stopped at the base of the rock face on top of which stood the unseen Castillo, through light rain and misty conditions we found Red-billed Chough, Black Redstart, Blue Rock Thrush and Griffon Vulture. 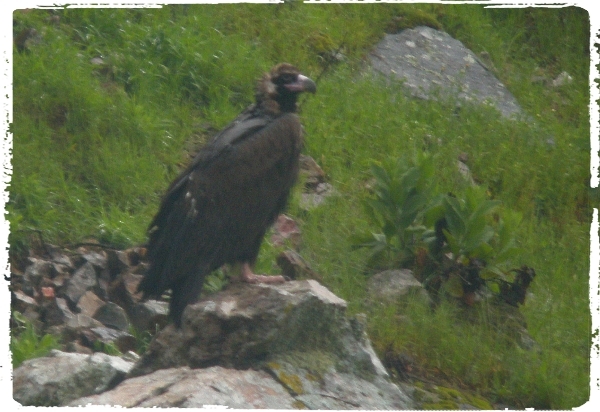 record shot of the Black Vulture

From there we drove round to the viewing car-park at Peñon Falcon which is a huge rocky pinnacle where many pairs of Griffon Vultures breed. The rain eased off a little, just enough for us to get some good sightings of a pair of Peregrine Falcons, Black Stork on the nest, Rock Bunting, Crag Martin, Black Vulture and dozens of Griffon Vultures. 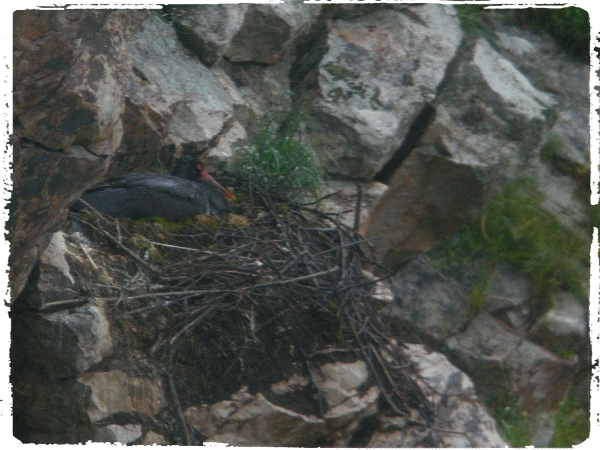 Black Stork on its nest

In the trees and bushes below us we saw Serin, Winter Wren, Short-toed Treecreeper and lots of common species. Next we drove round to Villarreal a village in the park where we had a coffee break. The rain stopped at this point, for an hour or so.

Moving deeper into the park we added Woodlark, Subalpine Warbler and Thekla Lark to the list and a short stop at the mirador de la Tajadilla, another rocky pinnacle, produced very little except for Long-tailed Tit in the trees around the hide.

So we drove over the dam of the River Tiétar to the final mirador called Portilla del Tiétar where famously, a pair of Spanish Imperial Eagles have bred for as long as I can remember. As we approach the mirador we could see many pairs of Griffon Vultures perched high on the rocks with their wings extended, drying their flight feathers, it was an extraordinary sight. 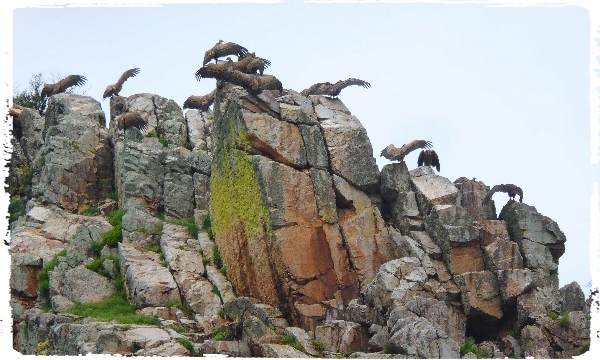 the Griffon Vultures hanging out their wings to dry

Almost as soon as we arrived we saw a Spanish Imperial Eagle having an altercation with a couple of vultures, the eagle would chase off any vulture that ventured near to its eyrie. We saw one of the eagles on the nest flapping the rain off its wings before settling down to incubate the eggs. The other adult eagle sat on a dead branch nearby, also hanging out its wings to dry. We had fabulous views of both birds during our hour-long vigil. 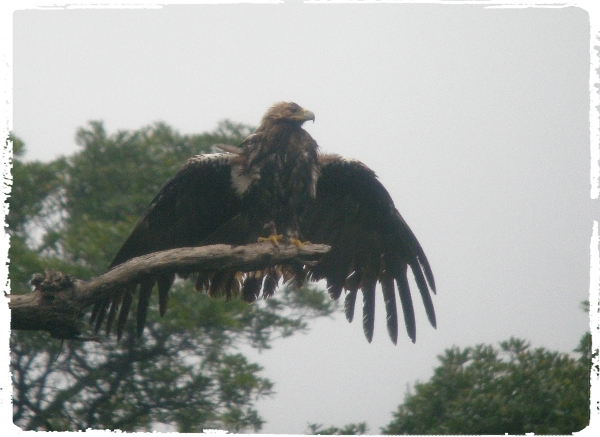 For lunch we drove to a Casa Rural on the edge of the park where a roaring log fire warmed us up as we ate. It was now 2pm and whilst the fain held off we decided to walk in the ‘Dehesa’ next to the restaurant and despite the poor light conditions we made several good sightings. Both Western Orphean and Western Olivaceous Warblers gave us the run-around before we nailed them. Common Cuckoo and Golden Oriole showed intermittently whilst Woodchat Shrike, Azure-winged Magpie and several common garden birds were very common. We had brief sightings of Mistle Thrush and we heard Eurasian Nuthatch, Green Woodpecker and Turtle Dove before the rain set in again and drove us off at 4pm. 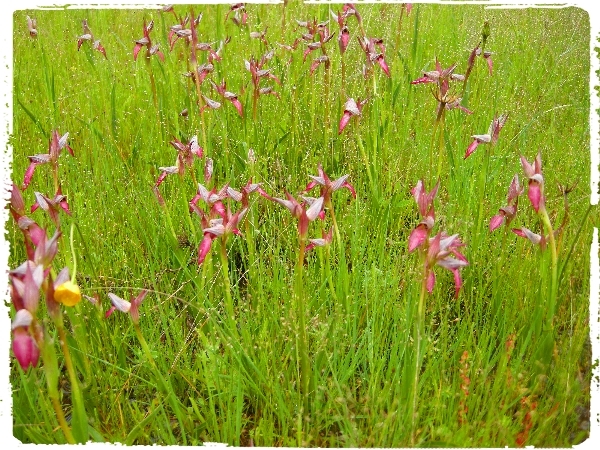 It was 5pm by the time we got back to the hotel we were all soaked and needed a hot shower. We met at 8pm for a lovely dinner and a glass of nice wine.

Tomorrow is our last day of birding, we have a great total of 183 species on the list with a target list of at least 10 more, watch this space!