We were up with the Lark and well before sunrise!  We were loaded up onto two open-backed jeeps at 5:30am we had had tea & coffee before boarding. We drove about 7km along very bumpy tracks until we reached our destination, which was a private house and garden. The owners had been feeding birds in their back garden for years and had started to attract a number of hard-to-see species.

At 6:15 we were all assembled at various vantage points in the rear of the house and the show began with appearance of several Grey-headed Laughing-thrushes, an endemic on our ‘wnted’ list. These birds looked and behaved like babblers and they put on quite a show, but then our attention was drawn to a solitary figure that appeared from the shadows, it was a Spot-winged Thrush. 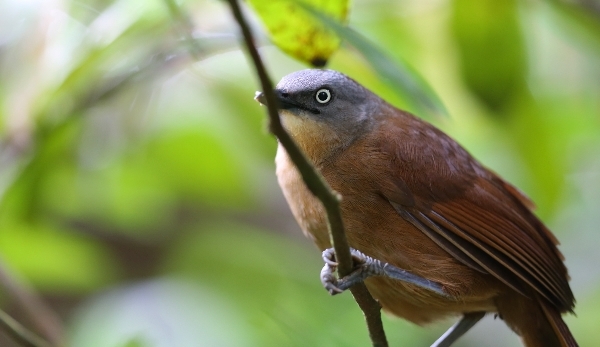 Further down into the garden, which sloped steeply away in front of us, a Slaty-legged Crake came into view, what a colourful little chap this one was. Suddenly, the star of the show appeared, a pair of Sri Lanka Spurfowl, another endemic. These birds came right up to almost touching distance giving fantastic views, smashing! 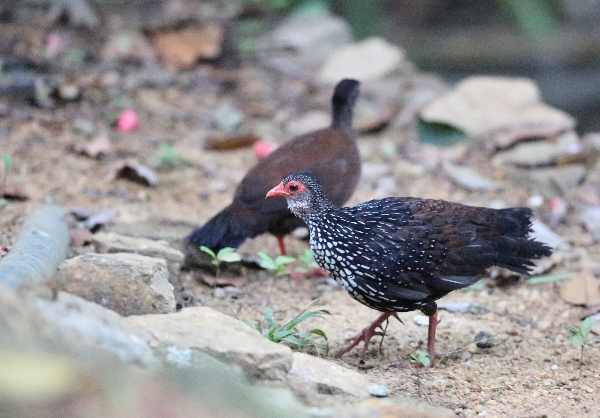 A female Junglefowl came next with two young chicks in tow, yet another endemic and the National Bird of Sri Lanka. 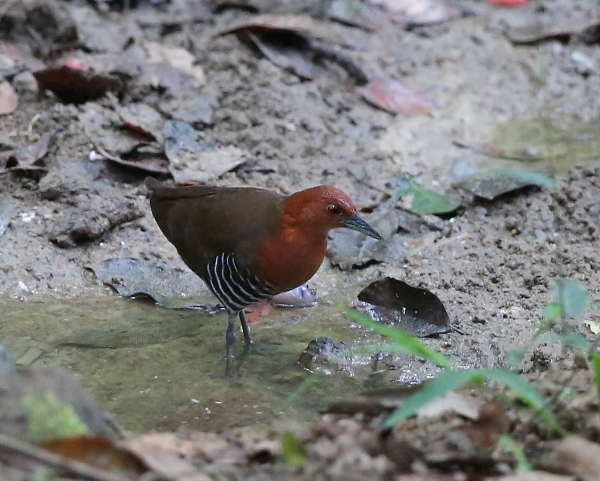 A group of Yellow-billed Babblers then turned up, in the meantime the cameras were clicking and the videos were being composed for various ‘twitter accounts’, Saman, our guide, drew our attention to calls coming from the hedgerow at the side of the house, where, after a little patience, produced brief views of the fabulous Scimitar Babbler, which rounded up our visit to this special place.

From there we walked further along the main track looking for our last 4 endemic species, Blue Magpie, White-faced Starling, Green-billed Coucal and Red-faced Malkoha. It was hard going in the heat and humidity, birds were few and far between but butterflies were out in full force, giving flashes of vibrant colours as they gracefully flitted by.

After a while we got glimpses of the Blue Magpie, what a bird! Over the next hour or so we had several views of this very shy but beautiful bird. The many butterflies that were on the wing were too beautiful to ignore, so we spent some time logging those and trying to photograph them. 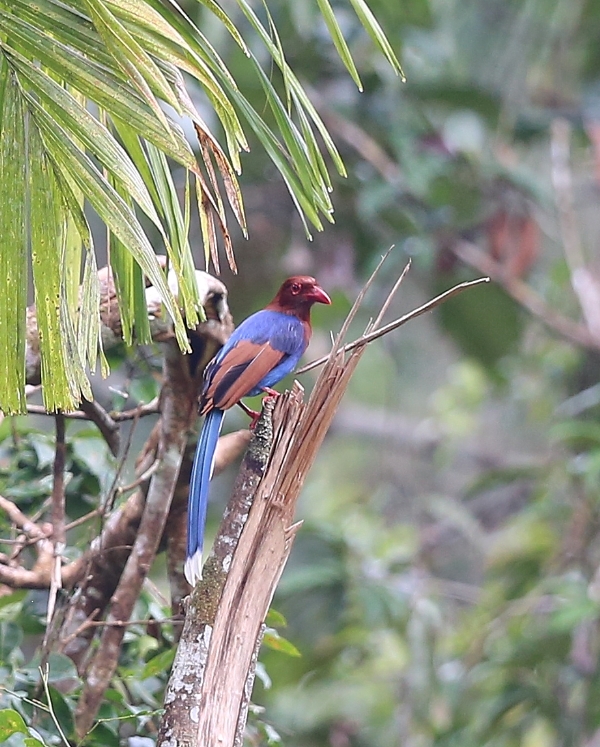 Blue Magpie - this bird was distant and in the shade

Breakfast was eaten about 9am, stood around our jeeps and used the bonnets for tables, during breakfast we noted Lesser Goldenback Woodpecker, Yellow-fronted Barbet, Sri Lanka Grey Hornbill, Pale-billed Flowerpecker and several more species. 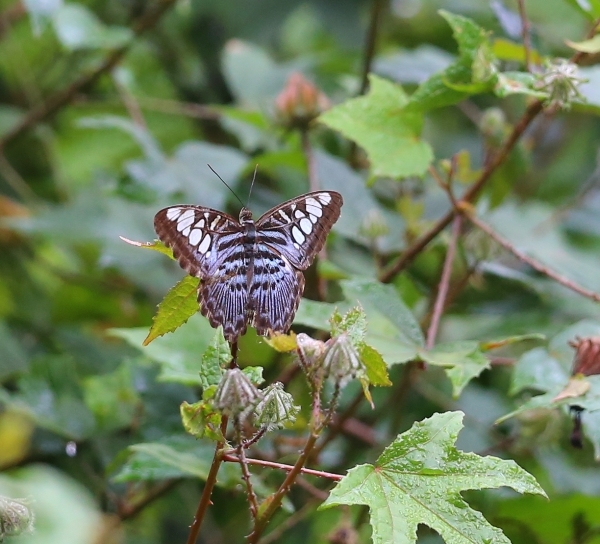 For the rest of the morning we walked back down the track toward Sinharaja Village hoping for a sighting of the very elusive Green-billed Coucal which had called a couple of time but failed to show. We amassed quite a list of species during our search for the Coucal, with Crested and White-bellied Drongos, Sri Lanka Green Pigeon, Brown Headed Barbet, Oriental White-eye, Small and Scarlet Minivets, Orange-billed Babbler, Velvet-fronted Nuthatch, Lesser Yellownape, lots of Legg’s Flowerpeckers and tons of Red-vented and Black Bulbuls. 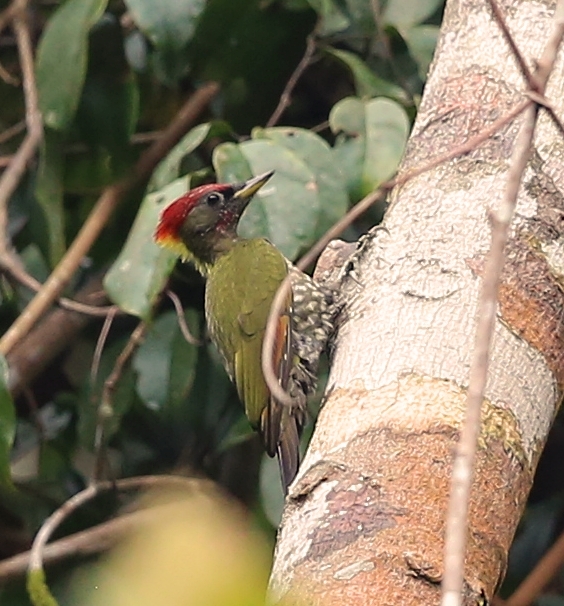 It was almost 12 noon when we finally caught up with a Green-billed Coucal, it took a lot searching and plenty of patience for all the group to see it, but see it they did. Marvellous, we set off back to the hotel for a well-earned lunch.

For the afternoon we were taken a few kilometers up the road to a specific location to see the Sri Lanka Frogmouth, a pair sat in a tree about eye-level from the ground, we had excellent views of this strange looking bird. 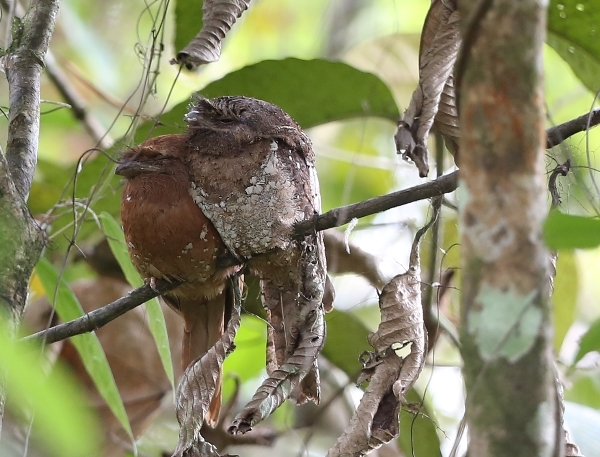 Next we went back to the track we had birded this morning in the hope of more Coucal views and more Magpie sightings. We got more Magpies but not the Coucal. We only stayed an hour or so and headed back to the hotel for an early finish. Again, we sat out in front of our rooms enjoying sightings of Asian Paradise Flycatcher, Golden-fronted Leafbird, Hooded Oriole, etc. Until, that is, a huge snake start climbing the steps towards us!! It was approx. 2 meters long, but it turned away once it detected our presence. Saman called it a Rat Snake, it looked as though it had just swallowed a rat with a distinctive bulge along its abdomen. 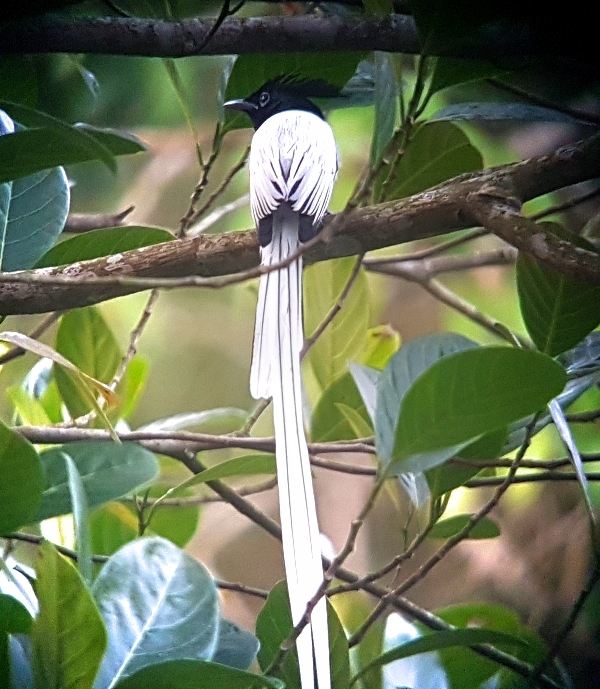 The stunning Asian Paradise Flycatcher - what a beauty I couldn't get all of the tail feathers in the picture!

We went to dinner as usual with lots to talk about, our bird log was completed soon afterwards, it had been a good day with some interesting and had to find birds now on our list. We have two endemics left to find, White-faced Starling and Red-faced Malkoha.