WEATHER: dry, hot and sunny for the most part, very windy again. 30C

What a fabulous day, we visited my favourite place on the tour and we saw 104 species!! Bundala is a special place and if you like wader-watching then this is the place for you, I love it. The approach road cuts through a huge swamp with reedbeds, open pools and lily beds and it is covered in birds.

We arrived at first light around 6am, the minibus dropped us off at the entrance to the marsh and we walked for a couple of kilometers it took ages to move a few meters as so much was going on. The only thing that spoilt the visit was the wind, it was quite strong even at 6am.

Nevertheless, we enjoyed some great birding and soon a nice list of new species was gathered as well as many, many species we had already seen. The Clamorous Warbler was singing loudly, of course, its sounds like a Great Reed Warbler on steroids! We search for a Black Bittern without luck but the number of waders made up for that. 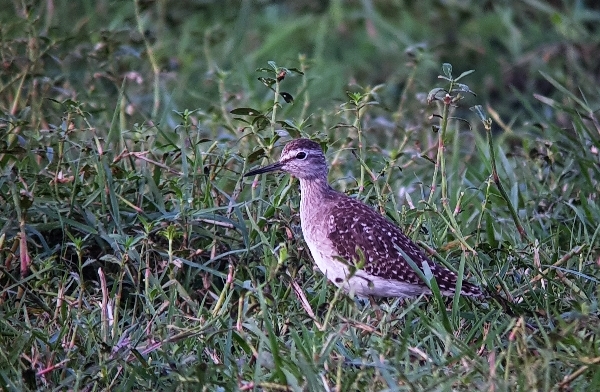 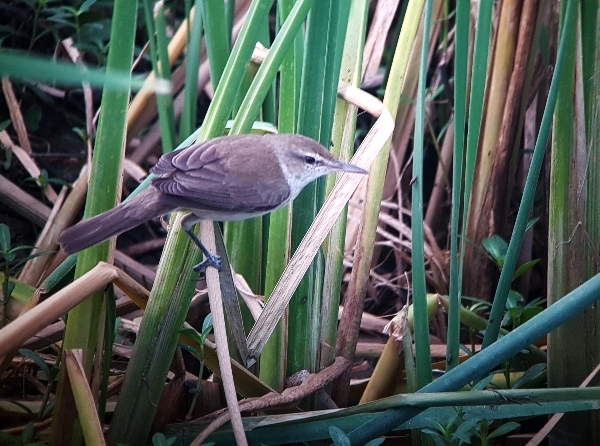 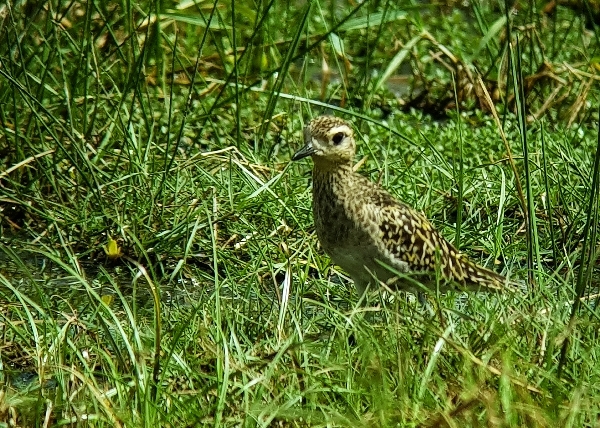 We found a Lesser Whitethroat and further along the track we saw a large mixed flock of Pratincoles!! Both Collared and Oriental Pratincoles just sat on the edge of a large pool. We added Sand Martin & Collared Dove to the list and we saw Richard’s Pipit, Paddyfield Pipit and Oriental Skylark on the grass verges. 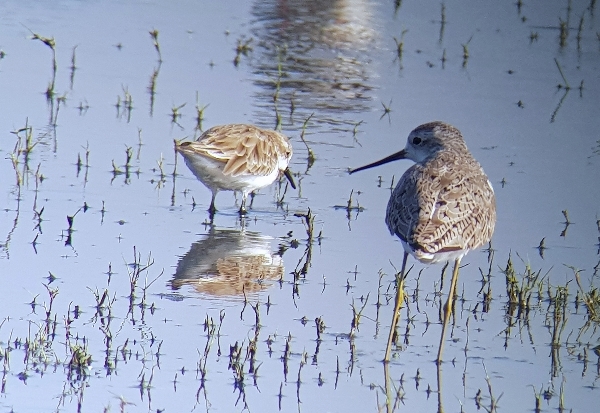 Marsh Sandpiper with a Little Stint

Phew! At 8:30am we needed a rest so we drove up to the main reception area at the entrance to the national park and sat to eat our picnic breakfast. We then transferred from our minibus to safari jeeps to continue our exploration of the park. 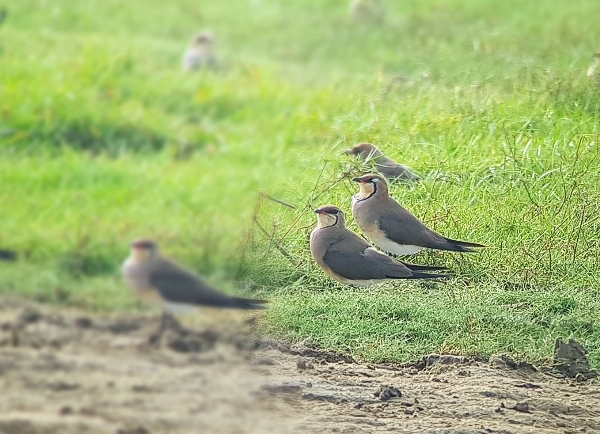 We moved on after a short while and before driving into the forested area of the park we visited a large area of salt pans which were covered in thousands of waders, terns, egrets and herons. We added new waders and terns to the trip list: Curlew Sandpiper, Ruff, Ruddy Turnstone, Little Stint, Caspian Tern, Little Tern, Sandwich Tern, Lesser and Greater Crested Terns, it was marvelous, every salt pan held a huge number of birds. 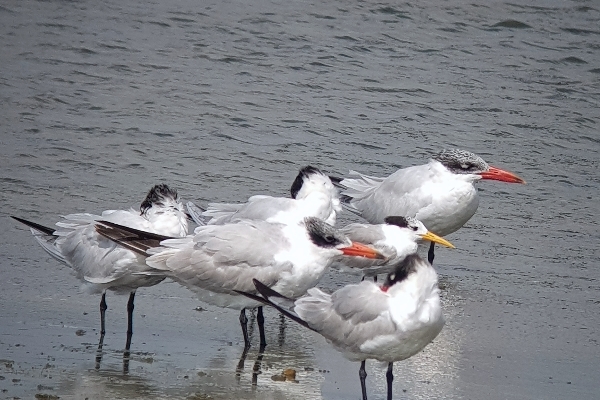 We couldn’t get down from the jeeps for the most part, but at one designated area were could stretch our legs over a length of the embankment. We scanned a group of terns and found Gull-billed Terns with some Brown-headed Gulls and dozens of Caspian Terns. 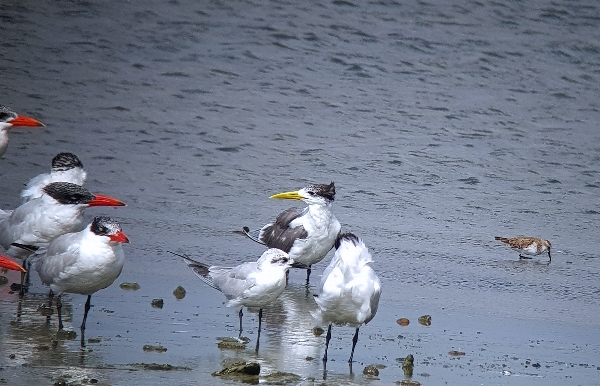 The return journey across the salt pans was just as exciting because we found more species, the Little Pratincole was a great find, we saw half a dozen of those and then we found two Red-necked Phalaropes, they were a little distant and were in choppy water with a bunch of Redshanks that were also swimming! 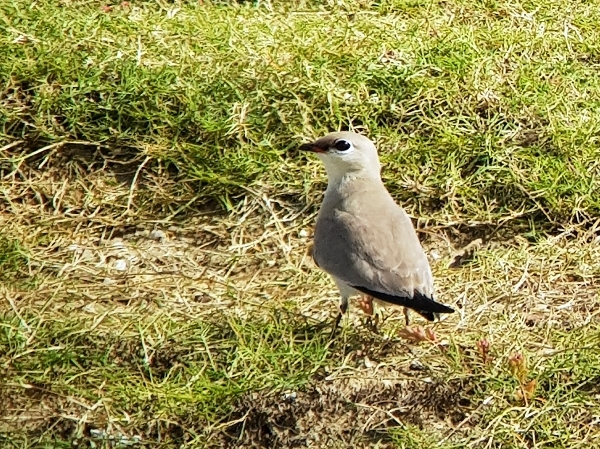 our third Pratincole of the day - Little Pratincole

Finally, we turned away from pans and took a track that skirted the marshes, we had pools and marshes on our left and forest on our right. It was a little more sheltered there and in bright sunlight the birding was fantastic. We added Watercock to our list, also Eurasian Spoonbill but the egrets, herons and ibis looked superb in the morning light. 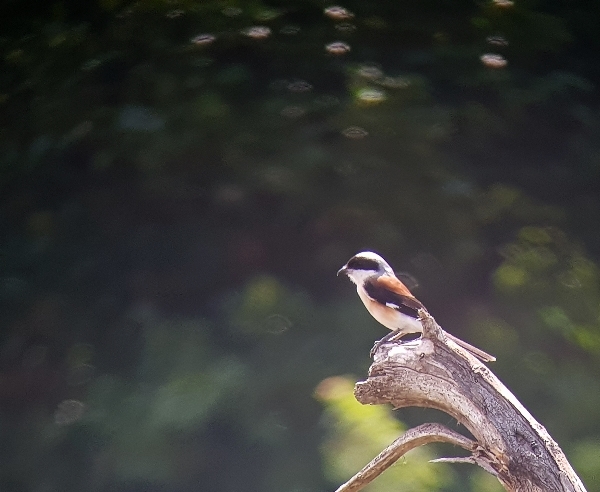 a distant record shot of the Bay-backed Shrike

One bird we were shown in the forested area was a Bay-backed Shrike, this is a vagrant species to Sri Lanka and it appears that the same individual has returned to the very same spot this winter as it did last year when I also saw it. It is a beautiful bird but, it always seems to be in a place where the heat and the light is too intense to photograph it well. 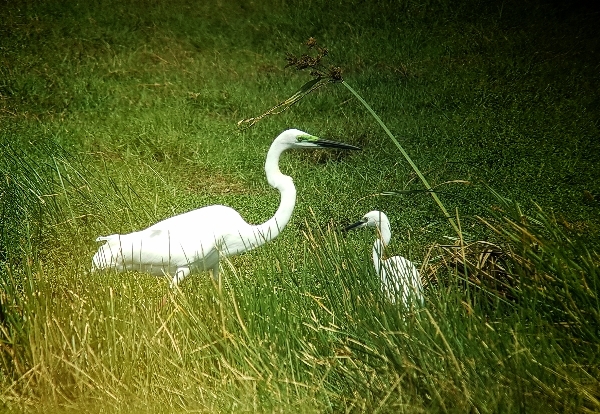 a Great Egret in breeding plumage with a Little Egret

We left the park at 11am and returned to the hotel where we had a very long lunch break followed by a couple of hours of relaxation during the heat of the day. It was 4pm when we met up again, the heat and intense light had abated and the wind had dropped significantly. 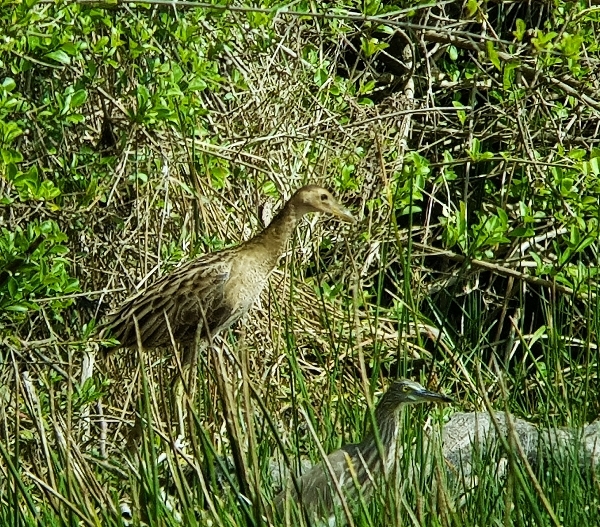 It took just 10 minutes to reach the ‘Giant Tank’ of Tissamaharama where another plethora of waders, herons, egrets etc. awaited our attention. But, before we scanned the huge shoreline of the reservoir we found a good number of species in the scrub and open grassland around the water’s edge.

the view we had of the Tissamaharama Giant Tank

Jacobin Cuckoos seemed almost common, we must have seen 3 or 4 of them in one small area, what a great looking bird. We also had great views of Oriental Skylark, Ashy-headed Sparrow-lark, Paddyfield and Richard’s Pipits, Asian Koel, Purple Sunbirds and to our great delight a bunch of Indian Thick-knees. 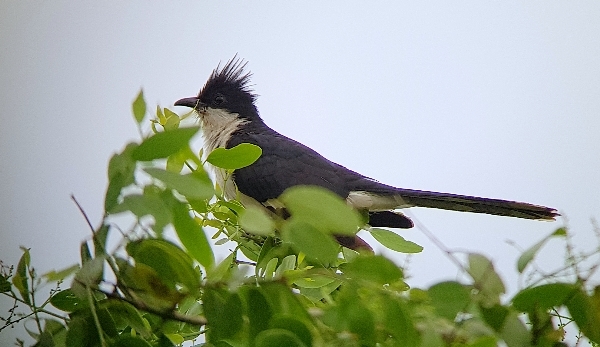 Scanning the shoreline was marvelous, it took ages to sift through hundreds of waders, I loved it. We found our first Temminck’s Stint, we had great views of Kentish & Little ringed Plovers and hundreds of Lesser Sand Plovers. I couldn’t believe the number of Terns we saw over the marsh, there were thousands of them. We added Common Tern to our list, this was our ninth species of tern!

The afternoon light was superb a flock of feeding Eurasian Spoonbills looked fantastic some of them were coming into breeding plumage too. Our guide Saman had to drag us away, the light was fading and most birds we flying off to their roost. The sky was full birds, all heading off to roost too, hundreds of Mynas, Parakeets, flocks of Munias, Sparrows and Larks and long lines of Cormorants, egrets and storks. 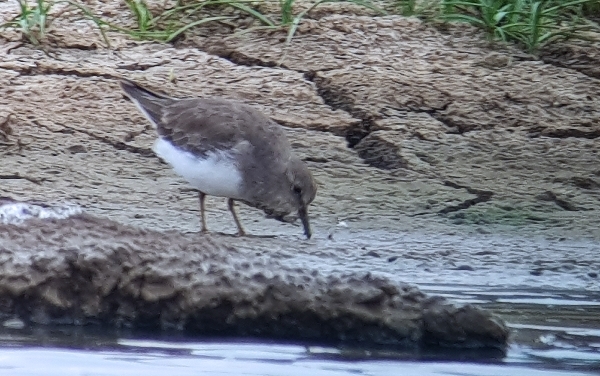 Saman had one final treat for us when we got back to the hotel, it was almost dark and he took us around the back of one of the pools in the garden and called out a Jerdon’s Nightjar, wow had fantastic was that. The bird flew around our heads and then alighted at the top of a dead tree giving us wonderful views. This was our 104th species of the day!! Furthermore, dozens of huge flying Foxes we leaving their roost, they filled the sky above us. Phew! I needed a cold beer and that is exactly what I had.