WEATHER: hot and humid in the morning, much cooler and cloudy in the afternoon.

It was most certainly a day of two contrasting halves, both in temperature and the birding. In the morning we stayed around tropical Kithulgala whilst the afternoon was spent at 800 meters in the mountains at Nuwara Eliya.

The morning trip was a great extravaganza, a birding fest, a terrific number of species and some tremendous scenery all around us. We left the hotel at 5:30am and spent nearly an hour travelling up a winding, bumpy track into the mountains above Kithulgala. By the time we arrived at our destination it was light, a little dull but the sunlight emerged later. 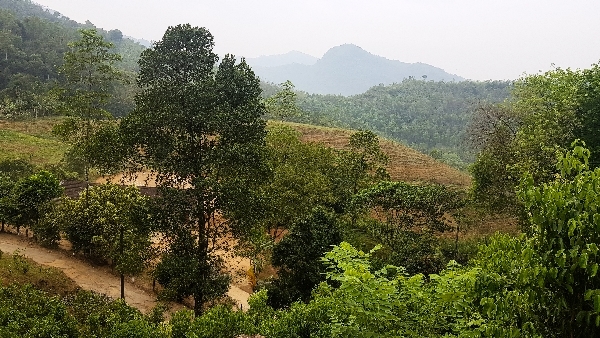 up in the Tea Plantation at Kithulgala Estate

We were up in the Kithulgala Estate, a huge Tea Plantation, the landscape was beautiful, the tea plants laid out in neat rows interspersed with many trees and scrubs. 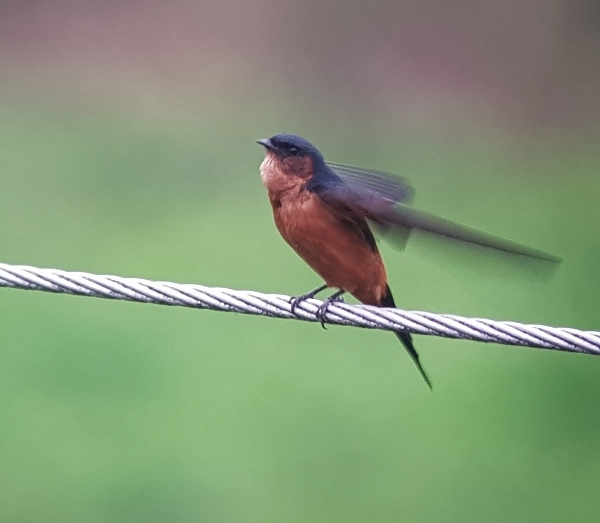 As soon as we stepped down from the bus we saw birds everywhere, it was amazing, birds songs and calls came from all direction. We quickly got onto a few bulbuls, in fact we found four species of bulbul in the first 10 minutes. Red-vented, Yellow-browed, Black-headed and White-browed Bulbuls were all seen in one tree. 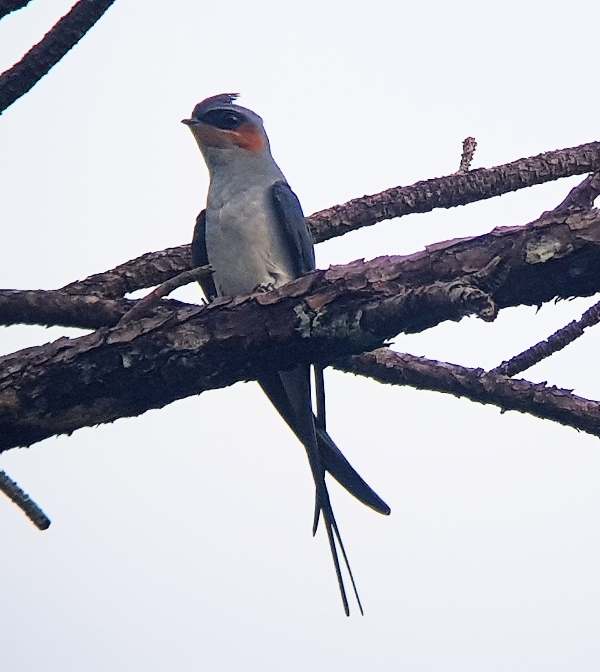 what a cracking bird - the Crested Treeswift

Our next sighting was of Black-headed Cuckooshrike, which seemed to chased off by a Brown Shrike which was the grey ‘morph’ (luciomensis). WE then found a Jerdan’s Leafbird, Scaly-breasted and White-rumped Munias, Black-hooded Oriole, Sri Lanka Swallow, both Blue-tailed and Chestnut-headed Bee-eaters, Oriental Magpie Robin, Indian Robin, Common Iora and Emerald Dove. 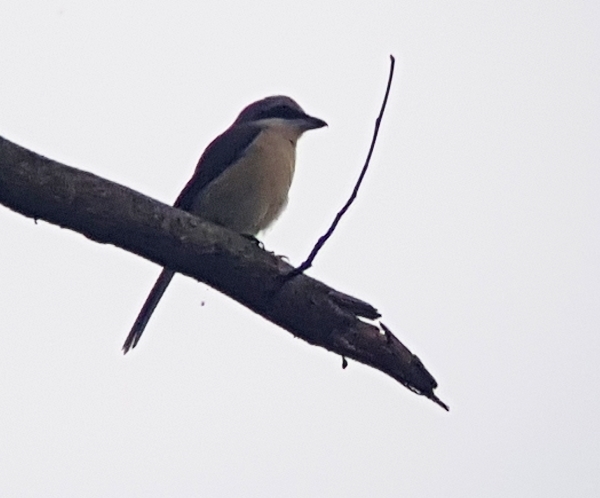 a record shot of the Grey 'morph' Brown Shrike

We then walked for an hour or so, uphill at a slow pace, it was fascinating to see latex being harvested from the rubber trees and dozens of eucalyptus trees. Many more birds appeared I didn’t know where to look first. Saman our guide called out bird after bird, Tawny-bellied Babbler, Crested Treeswift, Indian Swiftlet and he called out a White-browed Fantail that was sitting on its nest and then he found both Small and Scarlet Minivets. 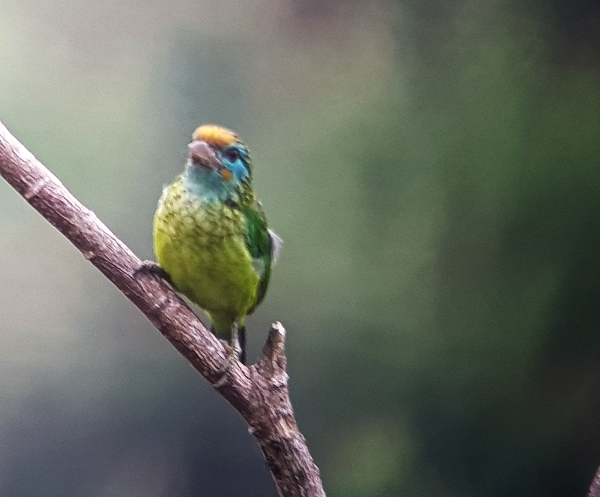 A couple of raptors appeared in the form of a juvenile Changeable Hawk Eagle and a Crested Serpent Eagle and then we found the endemic Crimson-fronted Bartbet, Grey-bellied Cuckoo, Sri Lanka Hill Myna and Common Tailorbird. 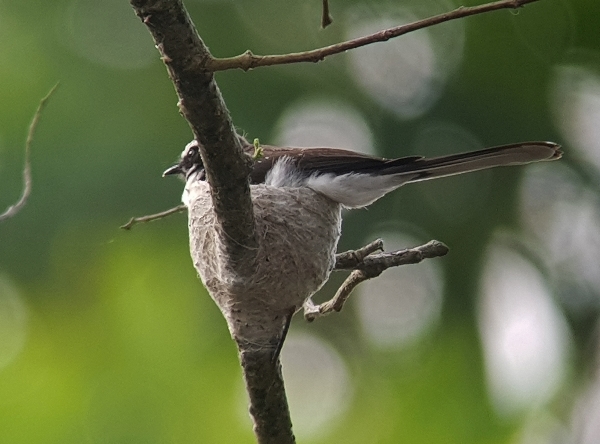 It was almost 9am by the time we left this incredible area, what a great start we had had to the day. We arrived back at the hotel around  9:30 and we went straight into the breakfast hall. 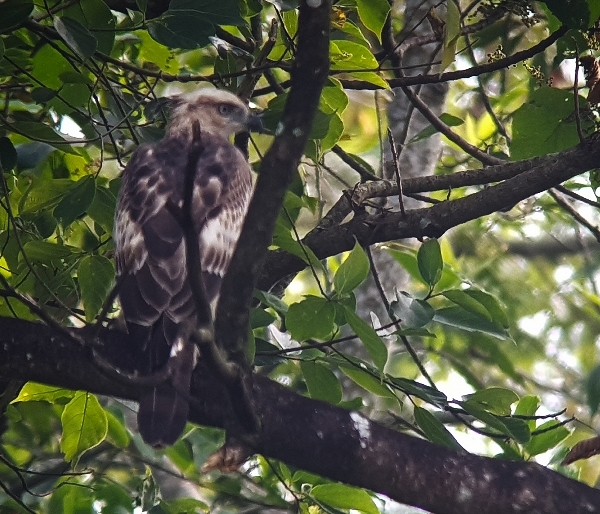 At 10:45 we were all packed and ready to go, the bus was loaded up and off we went to Nuwara Eliya  which was up in the mountains to the west of us. It was only 70km but it took 2 ½ hours to get there, the cloud thickened and the temperature dropped. We never saw much during the journey except for some cattle Egrets, Hill Swallows, a Ruddy Mongoose and Toque Monkeys.

,Once at the hotel we settled into our rooms and several of us watched a few new species from our balconies, we saw our first Sri Lanka White-eye, also Ashy Prinia, Large-billed Crows and a Black-headed Ibis flew over.

For the afternoon we visited two places, the first was a country lane which passed through a eucalyptus woodland. On one side of the lane was a steep drop down to a stream, many people had dumped rubbish there it was a real tip, but it attracted many birds especially flycatchers. 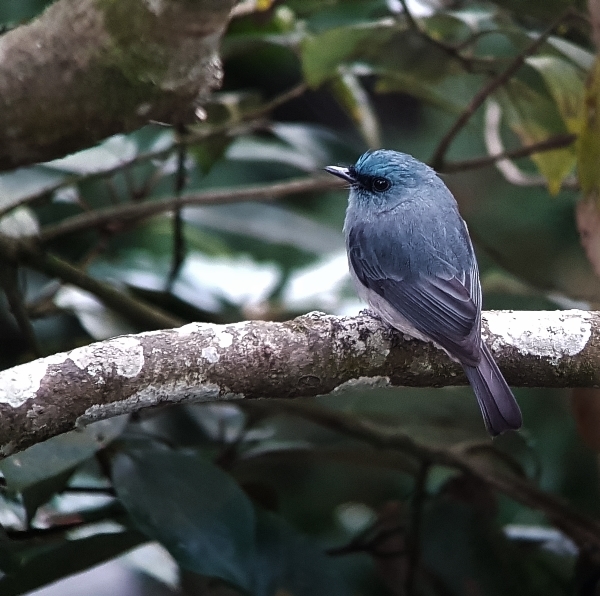 Dull-blue Flycatcher - there is nothing dull about this beauty

We spent an hour or two searching the undergrowth for flycatchers finding two species, Grey-headed Canary Flycatcher and the endemic Dull-Blue Flycatcher, both showed well at times. Our guide Saman also found Bar-winged Flycatcher-Shrike  and Kashmir Flycatcher but only one or two of us saw the former and no-one got onto the latter. 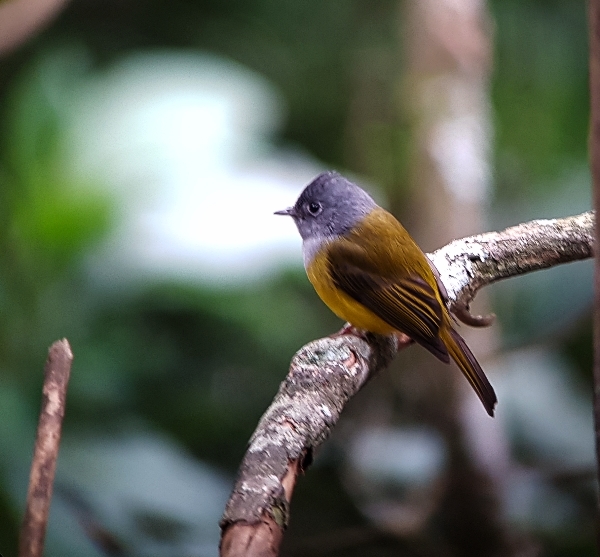 We also saw the Great Tit, I should imagine that this will eventually become a split as it starting to look very different in colour to the nominate race in Europe. The Indian Blackbird was also a new species for our list and we also had great views of Emerald Dove. 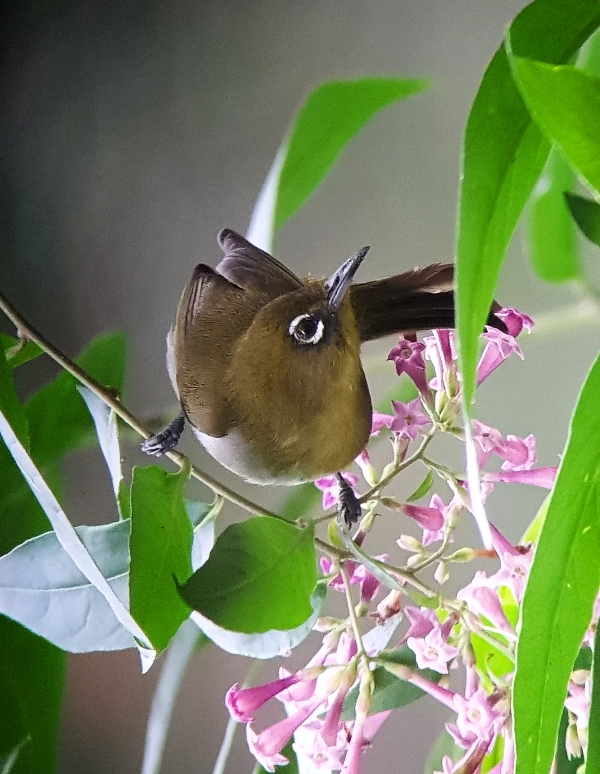 Our last birding place was by the side of a noisy main road, a narrow track went steeply down to a brook, it is a regular site for the Sri Lanka Whistling Thrush. However, things have changed since last year because now the place to stand is at the top of the track not down by the brook. It seems that one of the street venders next to the track has been throwing scraps in one particular place and the elusive Thrush comes there.

Well we waited and waited and soon we were entertained by Indian Blackbirds, the beautiful Indian Blue Robin and to our great delight a Slaty-legged Crake. We waited a good 40 minutes before the Thrush turned up, it shows well for a very short time and not everyone saw. Luckily, iit came back for two more visits and everyone got on to it, fantastic.

these are two shots from the back of Rob Wills Camera 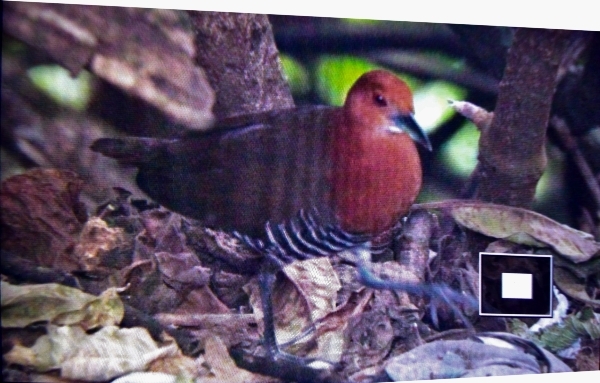 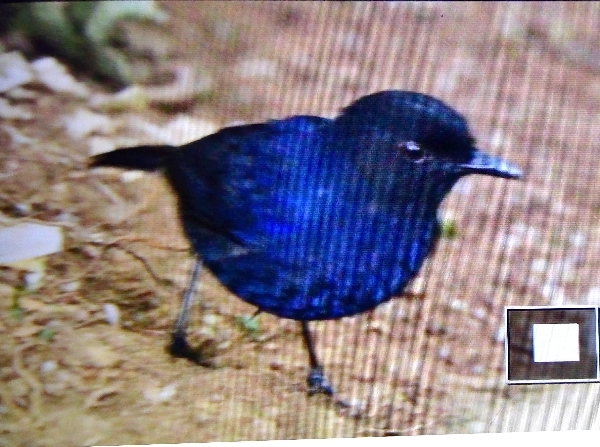 one final shot from Nigel Bleaken 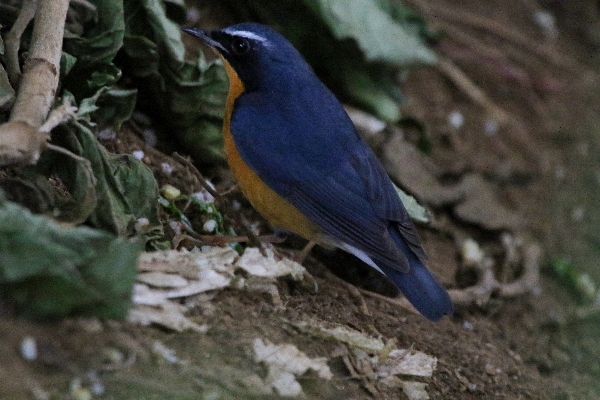 We got back to hotel at 6pm in time to get ready for dinner at 7:30pm.