Another early start saw us heading off to Horton Plains at 5:30pm, it was dark for most of the journey and we made one stop along the way. At Pattipola Train Station (the highest railway station in Sri Lanka at 6275 ft. ) we pulled over and took a very short walk to watch a an area of scrub, we were looking for Sri Lanka Wood Pigeon and within 15 minutes we found two of them.

Once in the park we made lots of stops and made a few short walks, the weather was terrific and the birding just great. First we stopped near a nature trail, we tried to find Bush Warbler without success but we find Dull-blue Flycatcher. 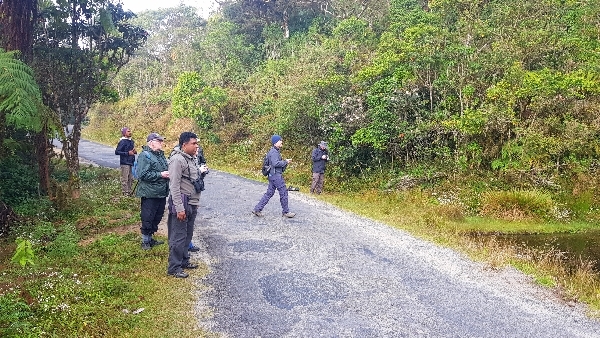 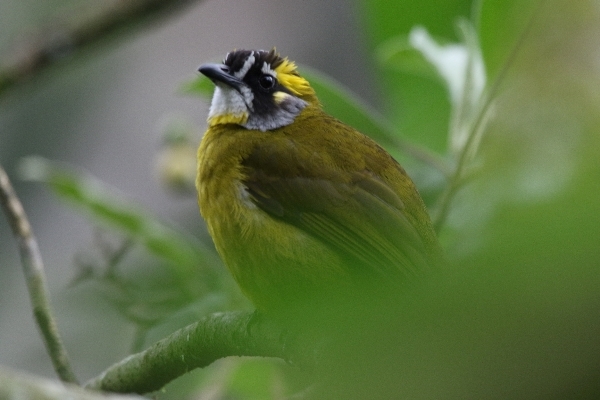 Our second stop was near a small pool of water and was much more productive. We found several species especially warblers. Green and Large-billed Leaf warbler were first into the notebook followed by Blyth’s Reed Warbler and some of the group saw Sri lanka Bush Warbler. 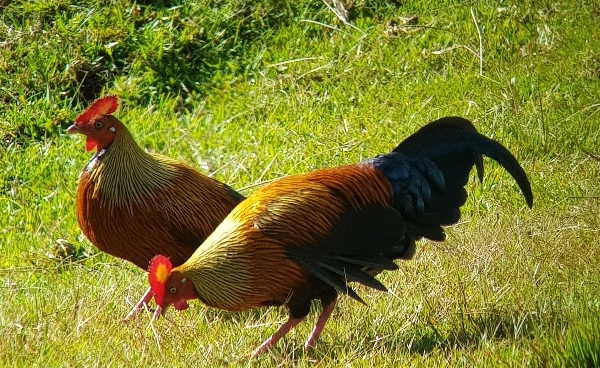 not roosters but Sri Lanka Junglefowl

A lot of the same species kept popping out so we had be on our toes, checking every sighting for new species. We drove out from the forest area to m ore open countryside and eventually onto the ‘plains’. The scenery was just fantastic, reminiscent of the African Plains in Kenya. 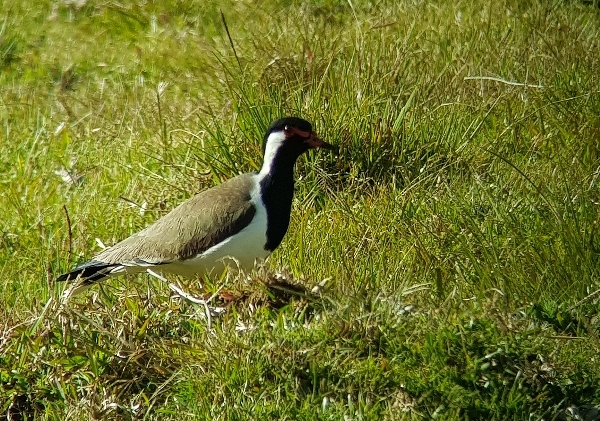 We found a whole new suite of birds on the plains: Pied bushchat was common, so was Paddyfield Pipit, we also found Himalayan Buzzard, Zitting Cisticola, a flock of Tricoloured Munia, Oriental Honey buzzard and plenty of Hill Swallows. On some open grassy areas adjacent to the woodlands we found Sri Lanka Junglefowl and red-wattled Lapwing. 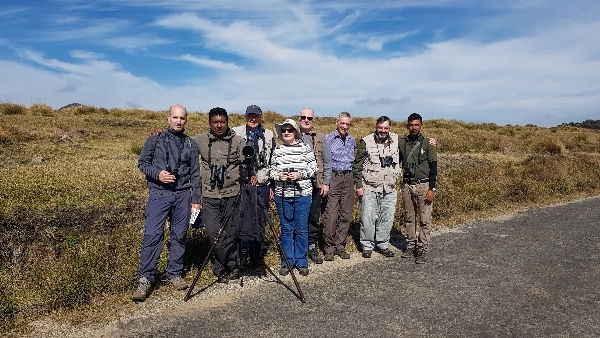 Very mammals were seen, Toque monkeys and a single Sambhur Deer was all we saw. On the way back out of the Park we stopped to take pictures of the incredible views and found a Bush Warbler, in fact, there were two and they showed extremely well. 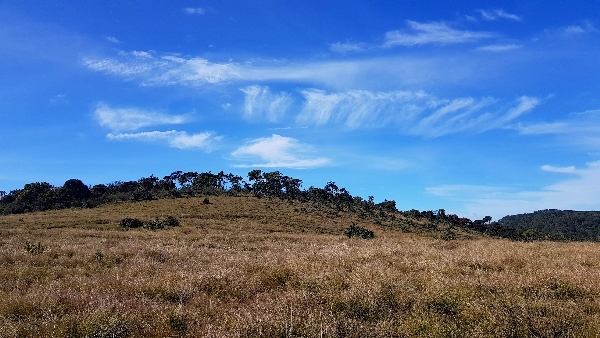 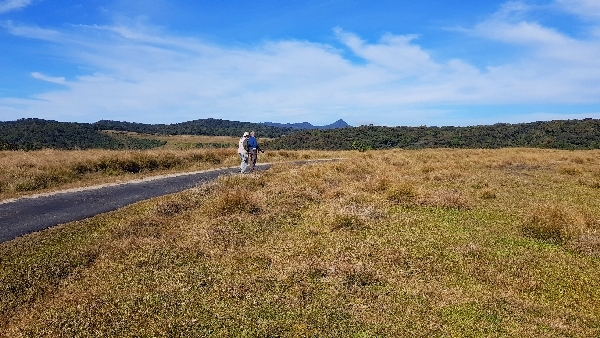 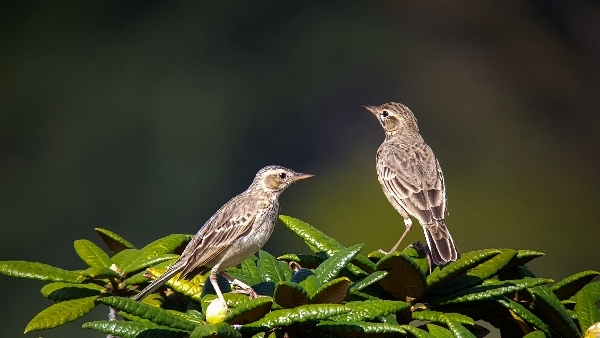 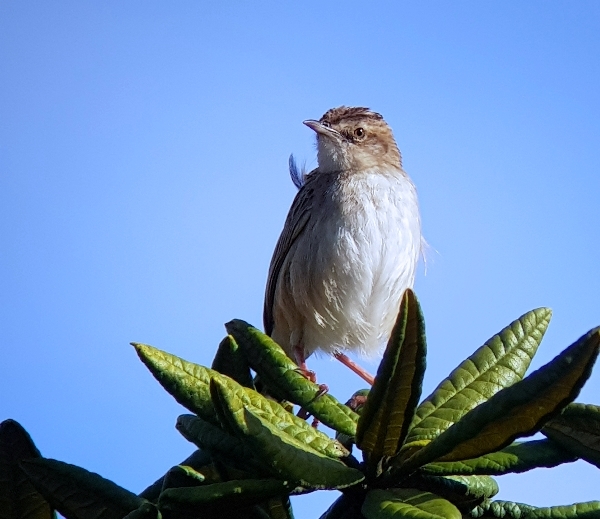 We got back to the hotel at 11:30am when we took  a break for an hour before setting off to the town centre of Nuwara. So at 12:30. We spent a little time on a cultural tour of a tea plantation where we sampled various types and strengths of tea and of course the obligatory tea-shop afterwards. We also visited a jewelers and looked at Sapphires, fantastic, but ouch on the pocket. After buying a picnic lunch we set off for Victoria park at the other end of town. 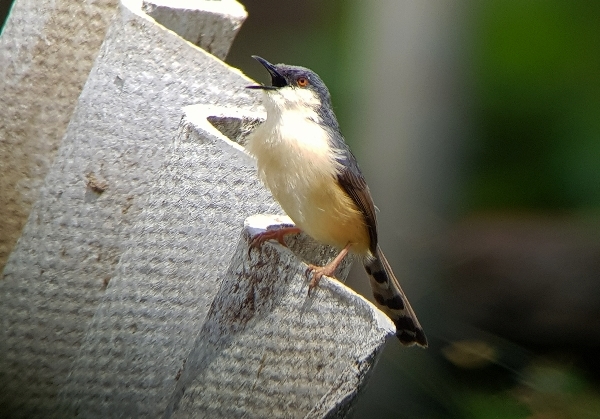 Ashy Prinia taken from my balcony at lunchtime

For the next two hours we searched this wonderful birdy place for two main target species: Kashmir Flycatcher and Pied Thrush. The park has ornamental pools, open lawns, a river (strewn with an unbelievable amount of litter), dense woodland in places and dozens of pathways. It is also very noisy with hundreds of people enjoying the sunshine, dogs roam around and yet an incredible number of birds are found there, 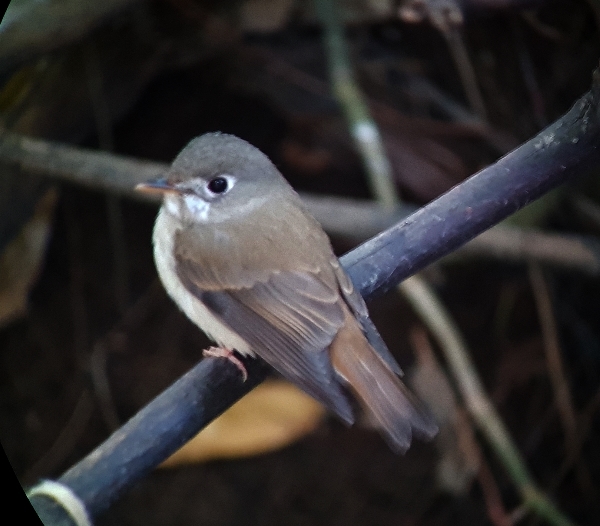 It was a lot less birdy this year than on previous visits, perhaps the dry weather had something to do with that, nevertheless we found a good number of species. Mostly common birds for the region but some goodies too. Cattle Egrets and Indian Pond Herons were everywhere, so was House Sparrow, Common Myna, Large-billed Crows and Feral Pigeons. 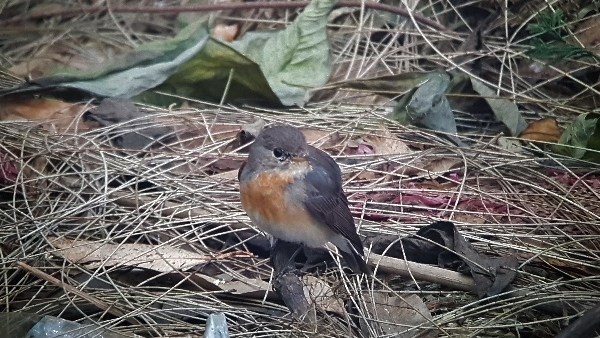 We saw Grey Wagtail, Common Sandpiper and a couple of us saw Forest Wagtail along the river before we started finding the sought-after species. An Asian Brown-breasted Flycatcher was a nice find and then we got onto a Kashmir Flycatcher, it was a dull specimen, a female, but a great sighting all the same.

Our search continued for the Pied Thrush and not long afterwards we struck lucky with a pair of them was found feeding deep in the undergrowth. We all eventually got great ‘in the scope’ views. 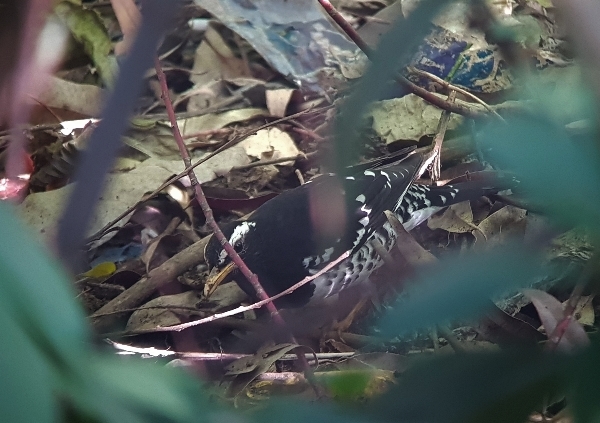 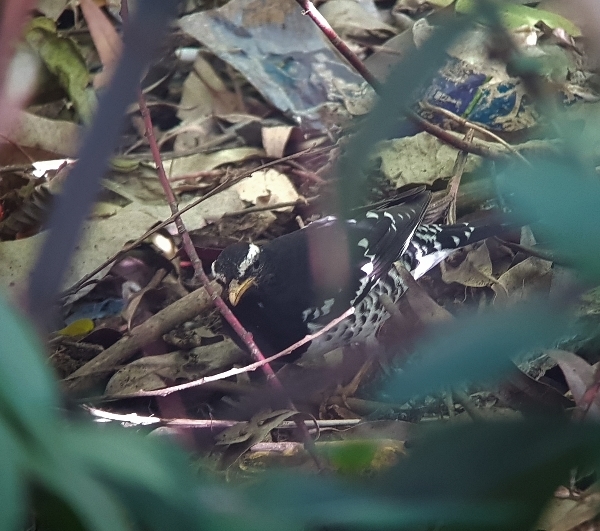 Well that ending our day, we did make an effort to look for Sri Lanka Thrush near a stream but we decided that we had had enough and went back to the hotel at 6pm.